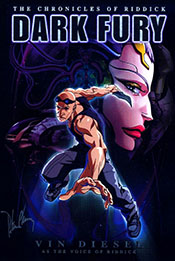 Taking place some time after the events of Pitch Black (how long exactly is unknown but is safe to say a short time afterward, as Jack had a shaved head in Pitch Black and is now sporting short cropped hair), Riddick (Vin Diesel), Jack (Rhiana Griffith), and Imam (Keith David) are riding around in space, apparently with no direct destination in mind. While on this aimless journey, their ship is hauled in by a mercenary transport ship, and is soon attacked by the mercenaries.

Riddick attacks and kills a goodly portion of the merc crew, but is forced to stop the attack when Jack is taken hostage. Our anti-hero is taken before the ship captain, Chillingsworth -- who happens to be a connoisseur of all things violent. Over the years, the captain has managed to capture every most-wanted criminal the universe has produced -- captured and turned into living statues. Having captured Riddick, she plans to do the same thing to him, but first she wants a demonstration of his killing prowess. She throws Riddick into an arena with a couple of weird aliens and tells him to kill the aliens or let them kill him. Riddick does indeed fight for his life, but then he manages to break from of his bonds and goes after the rest of the crew, and the captain, of the ship.

It becomes a fight for survival as Riddick and co. work their way off the ship to safety before the mercenaries are able to capture and/or kill them all.

Simply put, Dark Fury just doesn't work as a short film. It's purpose was to serve as a middle chapter (an interquel) between Pitch Black and the Chronicles of Riddick, tying up loose threads left between the two movies. As admirable as that intention may have been, the film never actually manages to live up to that goal -- we join the "heroes" after they've been flying around in space for a while, yet we're not told what they've been up to. Additionally, the film ends (chronologically) long before the Chronicles of Riddick takes place, so what actually happens between the two movies is never really addressed.

As a standalone movie, it also just doesn't work. If you've seen either of the two theatrical releases, then you'll know who Riddick is, at the very minimum. However, if you pick this up as your first taste of the universe, you'll be completely lost. For one, Riddick is not a character you end up liking in this movie. You don't get much of his back story, so all you know from this movie is that he kicks ass and is wanted for past crimes. Given how short the film is (35 minutes), it's very hard to work up any kind of emotion towards the character.

The rest of the cast is as poorly fleshed out as Riddick. The "heroes" are attacked by "evil" mercenaries, but we never find out who they really are, what they're doing, or if we should want Riddick to exterminate the whole lot (he does kick a lot of ass, so it would be nice to know if his ass-kickery is warranted). They attack, Riddick defends, and we're left to wonder why it all matters.

The worst of the bunch is certainly the captain. She's so one-note she makes Riddick seem deep. The whole point of her character arc is that she likes to collect violent people... and then lounge around them while they live out their lives as statues. Why she's doing this on a mercenary ship is never addressed, nor do any of the criminals (besides Riddick) ever get any kind of revenge on her, so really her entire "point" could have been rewritten and it wouldn't have changed all that much at all... maybe it would have made her more bearable, honestly.

So, if the movie (or episode, or OVA -- whatever you want to call it) isn't a character piece, maybe it's designed to show-off cool anime action sequences. Sadly, no. Most of the characters (being as one-note and underdeveloped as they are) are simply there to serve as cannon-fodder. You don't care if they live of die -- it comes as no surprise when Riddick run right past them, in a shower of blood, killing them two seconds after they appear on screen.

Every encounter is like this. It's over before it begins, and Riddick runs off to kill someone else. The aliens in the arena provide the most challenge, and yet, even then Riddick is barely touched by them, and they die unsatisfactorily and much too quickly to be of any value.

It doesn't help that the action sequences that we know Riddick will survive everything he encounters -- he's in the next movie, so plainly Riddick he can't die, or even be mildly hurt. Nothing is going to kill him, so why should the viewer care?

Additionally, the artwork for the film just doesn't work (at least, as far as this reviewer is concerned). The artists went with an overly-angular anime style (which is common in many movies), and while in those pieces it sometimes works (heightening the weird artificiality of the situations these movies depict -- it worked in the Animatrix), here it just makes the movie seem fake -- which, again, reduces any onscreen thrills. I would have preferred if they'd have gone with a more realistic anime style, or maybe even something akin to the Heavy Metal series (that actually wouldn't be a bad fit, what with Riddick's propensity for violence).

As the above review dictates, the movie just doesn't work in so many ways. A number of these however, could have been addressed if the film had been longer, or if it had been the start of a series of short films -- maybe as a backdoor pilot for a TV series. That was actually a sense I got while watching the flick -- that the producers wanted to make a Riddick animated series, but had to settle for just making the pilot. We, the audience, wouldn't be confused or apathetic towards a character like Riddick -- If given more than a 35 minute yawn-a-thon, there would have been more time for story and characters to be fleshed out. The uninteresting villain could have become more menacing in later episodes. The whole movie could have had greater context with other events tying into it. Sadly, even as a pilot episode it's just not that great, and if that supposition were true, it would explain why there were never more episodes.

There's little reason to see this film. It doesn't do anything for continuity, so fans of either theatrical release won't care. It's a terrible stand-alone piece, so new people should not see it first. It's one of those movies where, unless you have to see everything from a particular continuity, there's nothing to recommend it at all.