John Carpenter clearly loved his character, Snake Plissken, and had big ideas for where to take the character next. While Escape from New York became a low-budget sci-fi classic, its sequel, Escape from L.A. was a little loved flop. That put the kibosh on any future plans for the character as studios were wary of seeing further adventures with Snake. The plotted third film, Escape from Earth, was dead on arrival, and another script Carpenter finished, Escape from Mars had to be reworked just to get off the ground. 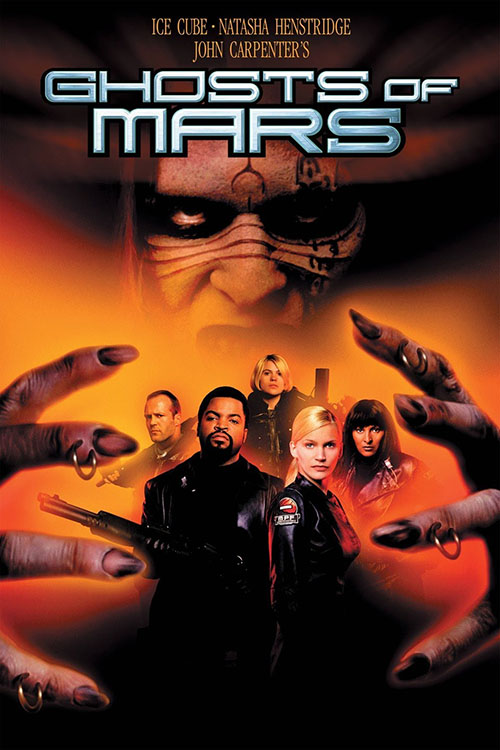 At the studio's insistence, the title of the film had to be changed, eventually becoming Ghosts of Mars, the character of Snake had to be renamed, becoming Desolation Williams, and, because the film needed "star power" (and wasn't allowed to use Kurt Russell), the producers insisted on using Ice Cube in the role. Needless to say, all of this combined helped to sink the film: a title no on cared about paired with a horribly miscast lead as a character no one had any attachment to. Plus, frankly, the movie was awful. There was just no saving this project.

In the film we're introduced to Lieutenant Melanie Ballard (Natasha Henstridge), a Martian Police Force officer who, after a mission gone wrong, is put before a tribunal for a length debrief (in a framing device that, it should be said, drains all the life out of the film). There she's asked what happened to all the rest of her crew and why her whole mission went sideways. And, most of all, what happened to her prisoner, Desolation Williams (Ice Cube), who she was sent specifically to reclaim from the jail at a Martian mining camp.

That's where we flash back to the start of her mission when Ballard and the rest of her team -- Jason Statham as Jericho Butler, Clea DuVall as Bashira Kincaid, Liam Waite as Michael Descanso, and Pam Grier as Commander Helena Braddock -- arrival at the mining town to collect their prisoner. But the town is seemingly abandoned and there are bodies, and blood, everywhere. Soon they learn that the miners are dead but possessed by the spirits of the Martians and have gone absolutely crazy. These violent, possessed people come after the police squad, so they all have to band together along since the prisoners in the jail -- yes, including Desolation -- to fight their way out and "escape" from this mining town.

We really can't discuss Ghosts of Mars without noting, repeatedly, up front that this is a terrible movie. We'll get into all the reasons why in a bit but it's also important to layout that, for the first 15 or 20 minutes of the movie, it's really not all that bad. If it had been an actually Escape from... film, the setup of this movie would have led to a very different adventure for Snake Plissken. The movie puts Natasha Henstridge's L.T. up front, makes her the main character of the story, and has the Snake-type character play off of her. This is a different dynamic than we've seen in the past, and that, coupled with the alien world (which technically Mars is) and the threat posed by the titular ghosts, would have setup a very different story from the previous two films. 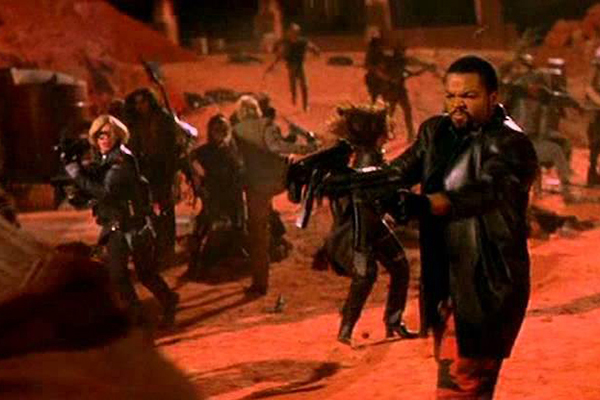 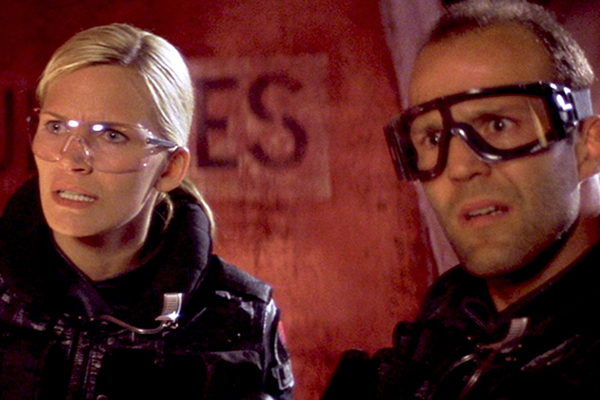 Whether or not that setup could have saved this film is debatable, though. A big part of the issue with the film isn't the story, which, while thin, isn't the worst thing ever; its the quality of the production, which is absolutely abysmal. When I went back and watched Escape from L.A. I marveled at how bad it looked. It had some of the worst production quality I'd seen from Carpenter -- shoddy sets, cheap effects, and overall shitty aesthetics, coupled with ho-hum direction and cinematography that, frankly, left the film feeling like a copy-of-a-copy of Carpenter's better works. That same level of quality (the lack thereof) is in Ghosts of Mars, leaving it feeling like a shoddy, terrible film made by someone other than one of the greats of genre cinema.

For starters, there's no sense of scale of setup for the mining camp the cops get dropped into. We see it from exterior shots, but everything is the same shape and size, with no differentiating landmarks. This means that as the people run between buildings (to avoid the possessed) and get trapped in those buildings, we have no sense of the scale, the layout, or how easy or hard it is for the people to escape. There's no thrill to any of it because it's really just people running through one shapeless hallway after another, while occasionally running across a formless desert stretch between.

On top of that, the action that we actually get is terrible. None of the people in the movie are credible action stars outside of Statham (who can reliable play a decent "hitter"), so all of the action is shot in such a way to try and mask how bad these people area. And yet, we still get moments were someone has to kick or punch a bad guy and there's no weight to their attacks (physical combat being as bad here as it was in The Karate Kid). When a soldier has to fire a gun in this film, the gun wavers in their hands and it looks like they're aiming at nothing. None of the action, in short, is believable, so even when it's setup in a place that you can actually tell the scale and scope, it's still not worth watching.

That its when it's filmed in such a way to bother watching it. Most of the time, as is par for the course in this era of action film making, the action is choppy and poorly edited. It's not as bad as in some films (like Taken 3, which 15 cuts to run a fence) but there's still obvious cuts to try and mitigate bad action and also to pump up the "thrill" (what little there is). There's no cohesion to the sequences, no linear progression of the action. It's all just a bunch of hits, punches, kicks, slashes, and gunshots films indifferently and stitched together. 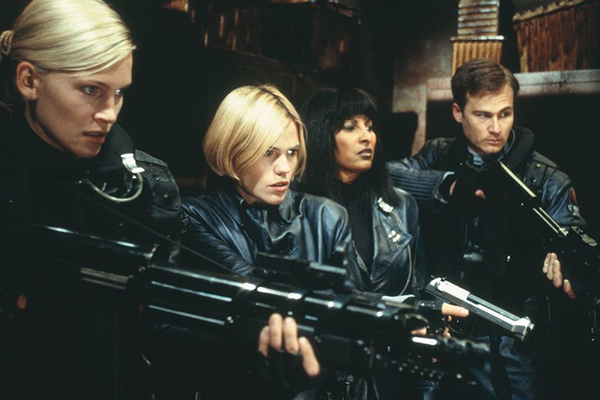 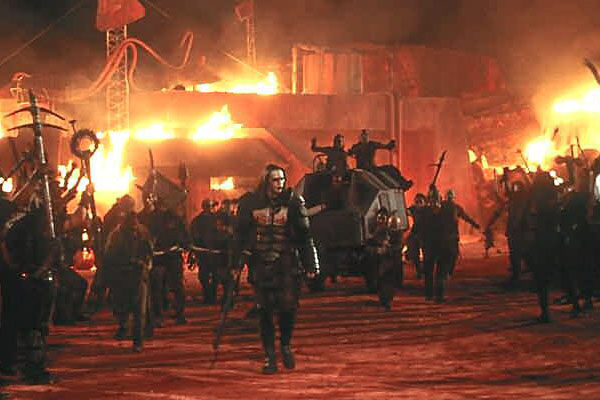 The only part of the film that's worth watching is Natasha Henstridge, who does a pretty credible job as a bad-ass cop. Her action isn't great (she's no action star), but in performance and bearing she has what it takes to be a heavy. She's certainly better than her co-lead, Ice Cube, who is laughably bad as Desolation Williams. Ice Cube, quite honestly, drags the whole film down with his wanna-be tough guy persona and lack of action prowess. He may have been a big star at the time (or big enough to be the lead here) but he had neither the skill or gravitas to pull off this Snake-like character. It's so laughable.

Of course, the villains aren't any better. The mutilated humans speak only in guttural roars, leaving us absolutely no actual character among their ranks. When they die the spirits possessing them are released, as a red mist, but for the most part all we see is a "ghost cam" filmed in glaring colors, that then flies at people to possess them. It's not a good effect, it's not engaging, and it makes for a really shitty monster, start to finish.

All around, then, this is a giant misfire of a movie. It feels like Carpenter on auto-pilot, just banging out a film he doesn't care about to an indifferent studio, all because they told him he couldn't make the movie he wanted. It would have been better if he had walked away from the project when they said it couldn't be Escape from Mars. I doubt the original would have been any better, but I have to hope that if he could have made the project he actually wanted to, instead of this Frankensteined mess, the final product would have had a little more spit and polish.

But then I think back to Escape from L.A. and, really, somehow I doubt it.