An Escape By Any Other Name...

In discussing the ill-conceived sequel Escape From L.A., I made the comment that I didn't think 1981's Escape from New York really needed a sequel, and I stand behind that. Hero Snake Plissken worked as a cypher, a shadowy figure that we barely understand, a guy that has a reputation we never learn about but is capable of any job given. Played with a sneer by Kurt Russell, Snake works best in a one-off situation where we never bother exploring the hero just enjoying his command and presence. The more you bring him back, though, the more mythologizing you do about the character. In essence, even if indirectly, you end up explaing the character, through those around him, his deeds, and his actions, to the point that he loses his mystique. New York should have remained a stand-alone film. 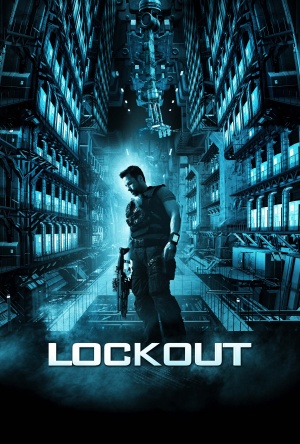 It certainly doesn't help that the resulting sequel, L.A., didn't have anything new to say about the world that had been crafted or the things Snake could actually do. It's a tired rehash that can't even come up with new ideas to fuel its warmed-over story. While the concept of the film could work in multiple settings -- a guy is called in to infiltrate a prison, collect a person or item (or both), and then "escape from" said prison -- the specifics of Escape from New York made it suck that an sequel would dillute the material. What was needed, instead, was a different take on the material that left the 1981 film alone while still honoring its intent.

Enter into that void Lockout, the 2012 Sci-Fi prison thriller. Essentially an Escape from... from by a different name, the film gave us everything we could have hoped for in a series extension, with material that nodded towards the 1981 original while still finding a new angle, a new hero, and a lot of fun in the process. The only trick was that the film wasn't an official sequel or series extension. It was, in fact, made without the agreement, in any way, of original director John Carpenter, script writer Nick Castle, or producing studio MGM. It was a great knock-off of the original made without any involvement from the original crew... which eventually became a problem as Carpenter sued for plagraism and copyright infringement in French court over the film and won. Oops.

So just how close in Lockout to Escape from New York. Well, quite different at the start, in fact. We open with an interrogation (a pretty funny one, in fact, with how much our hero quips through it) as ex-CIA agent Snow (Guy Pearce) recoints the events of the night. His tale is that he want to a meeting to help a frend and old colleague, to play backup if something went sideways, but then shit went sideways, his friend ended up dead, and Snow ended up on the run, chased by the CIA as they thought he was the bad guy. SNow made off ith a case (which he assumes has the evidence needed to clear his name, as well as containng files that shouldn't end up in the wrong hands), but he manages to pass that case off to his buddy, Mace (Tim Plester), before getting captured.

Convicted of murder and treason, all in the matter of hours, Snow is destined for MS-One, a maximum security prison orbitting Earth, where Snow will be put on ice for a long, long time. But that transfer and imprisonment is put on hold when the President's daughter, Emilie Warnock (Maggie Grace), who is visiting the prison on a humanitarian mission, ends up captured by a group of escaped convicts and held hostage. Snow is then sent in to save the girl and get her out, all for the chance to clear his name and made figure out who the real bad guy is. He just has to get into the most impenatrable prison around and then somehow get back out, all while all the prisoners have complete control. Easy, right? 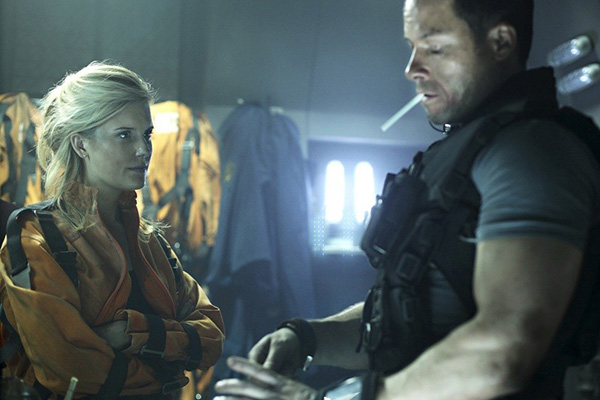 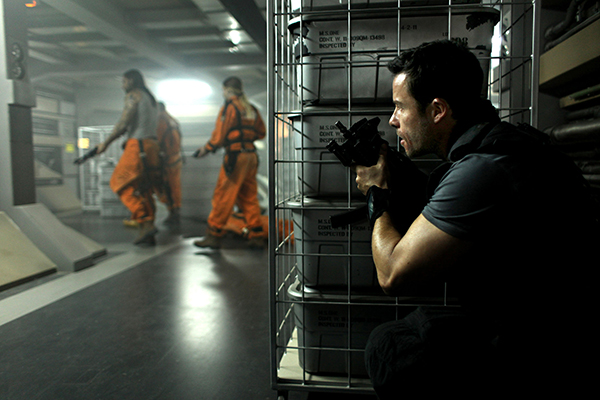 So, I guess the answer is that the film is and isn't just like Escape from New York. Certainly the setting is different -- deep space than any post-apocalyptic island -- while still remaining pretty similar in a sense (what is a space base but just an island from a different angle?). And, yes, it does still amount to a single guy heading into the mission alone, as so he can perform some kind of fetch-and-retrieve mission. Make no mistake, from a simple, vague angle this does strikingly resemble a Escape from... film.

At the same time it's in the details that Lockout differentiates itself, and we have to start with the lead character. Where Snake Plissken is an out-for-himself bad-ass with absolutely no backstory to speak of, SNow is given just enough detail to flesh him out. We know he's ex-CIA which meant, at one point, he cared about his job and duty and all that, plus from the way he acts in the early part of the story, we assume he's a good guy, deep down, and that he follows through on any mission given to him. Sure, he's a sarcastic ass and mouthy as hell (another difference between Snow and Snake, for that matter), but that just makes him more interesting, not less.

There's also the matter of his charge, Emilie, who is a more fleshed out character than anyone we meet in the Escape From... films. Unlike in those other films where anyone we meet is basically there simply to further Snake's mission, Emilie ends up a co-lead with Snow, becoming part of his mission to clear his name as well as motivating his shoft towards trying to stop the bad guys and save as many hostages as they can. There more depth and substance to both these characters than we got in either of the previous films.

Plus, the whole setup of the prison is different. While it's superficially an "island in space", yes, it's a functioning prison with guards, technicians, and defenses. It has rules and regulations and the only reason the prisoners end up running the prison here is because someone screws up and ends up letting them take over. This is a sudden and desperate situation, something outside the norm for the prison, and that changes the setup of the scenario that Snow gets dropped into. The meat of the story, everything that happens once we get to the prison and explore its environs, is different from anything setup in the Escape from... films. 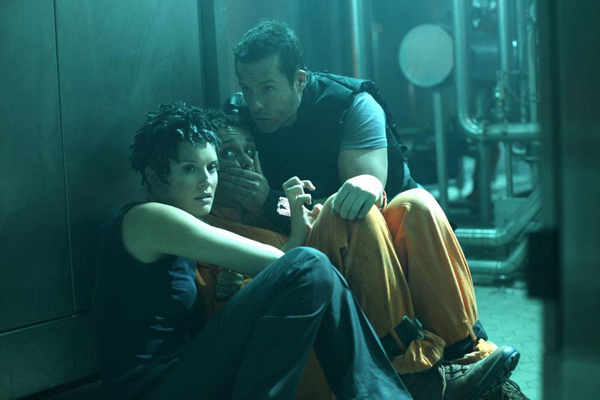 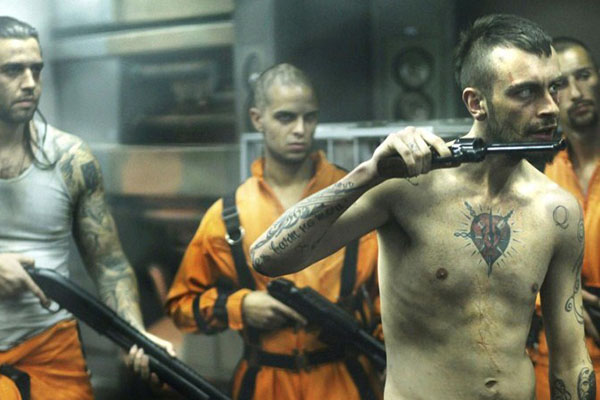 Frankly, I think Lockout is a much more fun and enjoyable movie than either of the Escape from... films. Pearce has a lot of fun in his role as Snow, carrying the film on his constant patter and easy quips. He's hilarious, honestly, but he is easily able to transition into action-hero mode without it feeling jarring. He handles all aspects of his character perfectly, and that includes the easy chemistry he has with Grace's Emilie. These two, honestly, give this film more heart and soul than a simple actioner like this deserves and the film is better for it.

This film honestly has so much going for it that, once you get past the superficial comparisons, it starts to feel like its own beast. It is silly at times, and the setting isn't without its flaws -- Why are all the controls for the prison in a single room that one prisoner can take over, allowing them to release all the prisoners at the push of a button? Why is no one watching all the hallways to see when a prisoner gets out and starts marauding around the inside of the base? How can people in deep freeze suddenly just wake up and act normally without some warm-up time? -- and yet, in the heat of the moment, it all just clicks. Its fun and fresh and a hell of a ride.

What concerns me, really, is the precident the French case sets. Now, at least for France, if someone wants to make a prison movie they have to be wary of prior art. Does that if someone wrote a film about a guy in, lets say, the 1500s who has to infiltrate a prison camp and rescue a royal hostage they'd end up paying Carpenter for the rights? Is it just because the prison is in a Sci-Fi setting? DOes Carpenter now own all Sci-Fi prison films (in France, at the minimum)? How specific does a setting have to be to fall prey to this case, and what does it mean for similar films in other genres? How far can this case be stretched.

In general there's a principal that genres can't be copyrighted, that ideas themselves can't be plgaraized, just the text on the page. These movies are far apart in content that it doesn't look like plagarism, just knowing nods towards other material. Most people would say they aren't the same, but case law now dictates otherwise and this could have a chilling effect on films for a while. THere are often cases where two films come out and seem very similar to each other, so now can people be sued, at least in France, over their similar ideas. Genres should remain above the fray because, otherwise, you get stupid situations like this. 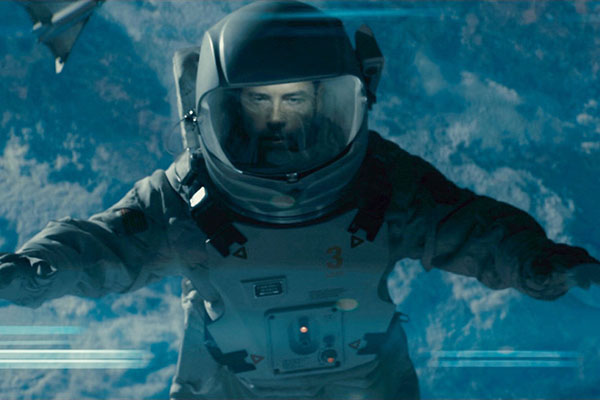 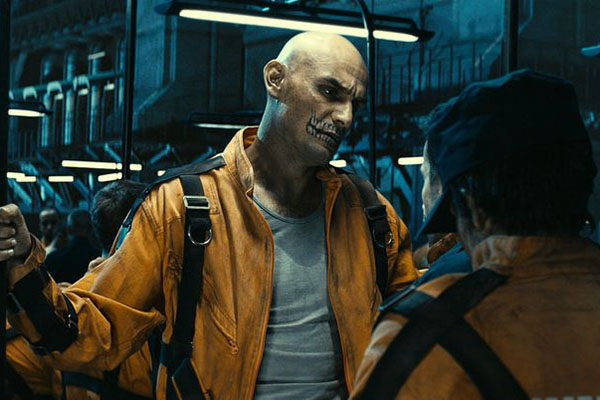 Lockout wasn't a huge success when it came out, which is sad because the film is really a hell of a lot of fun. But even if there had been thoughts to make a sequel to it, those plans were probably scrapped the second a lawsuit was filed. No need to extend the franchise now if they'll just get sued over the next film, too. But, in this once specific instance, maybe that's not entirely terrible; I hate the precident the lawsuit set, but I again don't really think we need a sequel here. How could you extend this film except to send Snow on another Sci-Fi rescue mission. Maybe to Mars?

Wait, then I'd have to watch Ghosts of Mars again. Please, no.