Doin' It for the Ladies

The Next Karate Kid

What make a Karate Kid film? Is the connective tissue holding the films together Daniel LaRusso, the part played by Ralph Macchio in the three mainline films in the series (and the YouTube Red/NetflixOriginally started as a disc-by-mail service, Netflix has grown to be one of the largest media companies in the world (and one of the most valued internet companies as well). With a constant slate of new internet streaming-based programming that updates all the time, Netflix has redefined what it means to watch TV and films (as well as how to do it). series, Cobra Kai), making the films about his coming-of-age and development into maturity? Or is it about Miyagi and his wise teachings. While most would figure its the former, as Daniel and his story, overcoming various challenges, is what really drives the films, but for this fourth installment of the franchise the series tries to say it's the latter. Daniel? Who cares! Let's meet Julie. 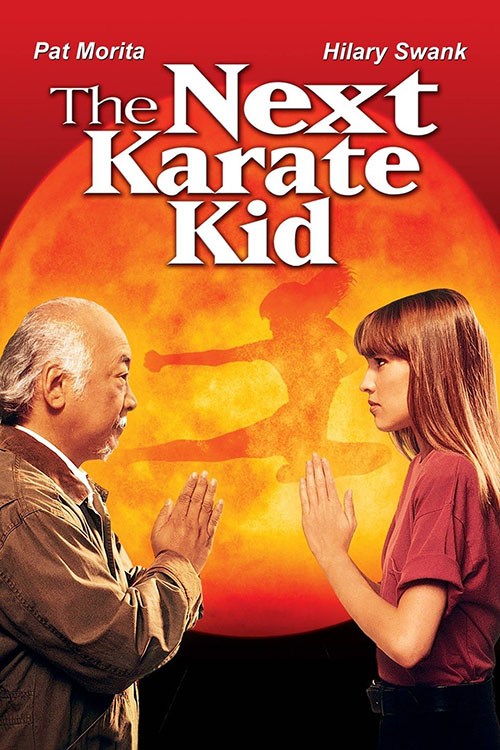 Admittedly, trying to extend the Karate Kid franchise out past the first three adventures was a lose-lose proposition. When the third film came out Daniel was hardly a kid anymore, already 18 and portrayed by the then-27 Macchio. Five years later that actor would have been 33 and really showing his age, and Daniel would have been at least 23 (if not, updating the film to real time, 26 or even 28). Obviously that stretches the idea of the films being about a "kid" (and that doesn't even get into if Macchio wanted to come back for a fourth film). So the film series, if it were to continue, had to find some other hook; instead of focusing on Daniel it had to create a new character. So, instead of Pat Morita's Miyagi just finding another boy to train, this time he finds a girl, Julie Pierce, played by soon-to-be Academy Award winner Hilary Swank.

Whatever argument could be made about whether the franchise really needed to continue (and we'll get into that in a bit), I do appreciate that the film at least tried to go in a new direction, putting Miyagi up against a student of a different gender to create different relationship dynamics. The film mines a fair bit of comedy out of Miyagi being out of his depth around a girl, unsure how to act and realizing the same friendship he had with Daniel doesn't extend to Julie. As he says in the film, "boys are easier." But the film makes an effort to present her as a strong and capable girl, not a tom boy per se, but also not some fawning girly-girl. She has her own style that feels honest and fresh and it does work for the character, powered in no small part by an actress who would go on to be an A-list performer.

However, that's about the only thing the film gets right, frankly. In just about all other respects the movie makes a solid argument that it really doesn't need to exist, that the franchise was completely running out of steam and was just spinning its wheels. We'd so far had three movies that told, more or less, the same story all over again and now, for a fourth time we get the same basic story again, just with a newcomer taking over the "title" and working their way towards a final fight. Actually, considering the parallels between this series and Rocky, this also feels just in line as that series pulled the same trick with its eventually series extension, Creed, although that film was much better than the half-baked The Next Karate Kid.

The problem that The Next Karate Kid first runs into is that it can't find a story to tell that isn't basically the first film all over again. Yes, we have a new character, and a new setting, with Swank's Julie attending a military school after the deaths of her parents (car accident), leaving her in the care of her grandmother. Julie doesn't want to be there, still struggling and grieving, so she mostly ditches school and gets into trouble, especially with the goon squad at the school, Alpha Team, and a elite group of fighters led by alpha boy Ned Randall (Michael Cavalieri), and taught by "sensei" Colonel Paul Dugan (Michael Ironside). Julie gets herself suspended for two weeks so Miyagi takes her under his wing and trains her, helping her find peace through Karate while spending the two weeks at a Buddhist temple (somewhere in the backcountry of the U.S.) before bringing her home. 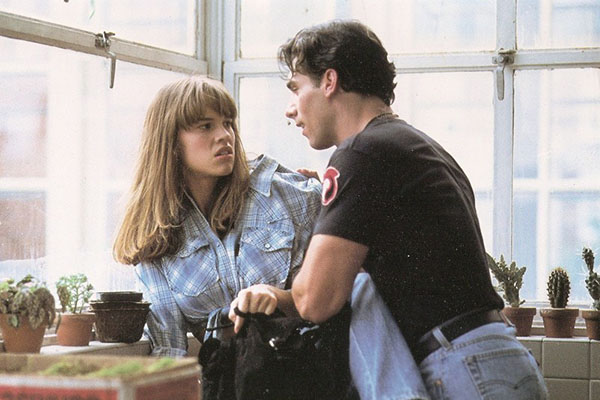 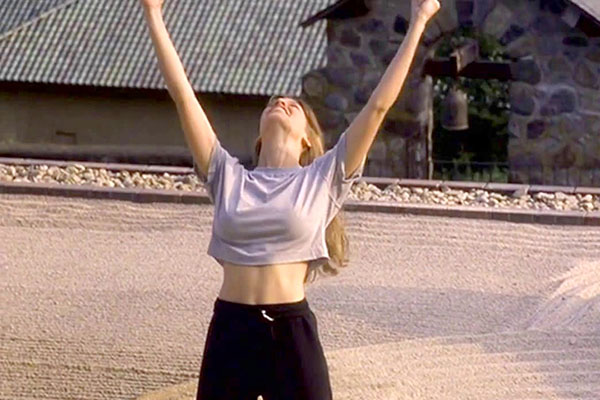 Back home Julie falls for a guy, Eric McGowen (Chris Conrad), and ends up going to the Senior Dance with him. But Ned, alpha male that he is, want Julie for himself and hates Ned as well, so he attacks the two of them at the end of their date and causes a big fight. This leads to a showdown between Ned and Julie that, through the teachings of Miyagi, Julie eventually wins, proving that the true heart of a warriors can win the day. And, somehow, this solves all of their problems. Case closed.

Except, no, it really doesn't. If you think about it, there is no way this pat ending (oh, and sorry for the spoilers for a now 26-year-old film) solves anything. The Colonel is a brutal, awful man so there's no way he'd take the defeat of himself, or his team, lightly. He's already been shown encouraging vandalism, arson, and attempted murder, all to prove a point, so there's no way he lets this go. I wouldn't be surprised if the next day he hasn't kidnapped both Miyagi and Julie and set them plunging into the ocean with a matching set of concrete sneakers. This is the kind of guy that would clearly go on a sniper rampage against Miyagi and Julie, killing everyone they know just to prove he was right and they were wrong. But, no, Miyagi settles it all in a street fight and that's that. Hardly.

It's pretty clear the film really doesn't know what kind of story it wants to tell simply because it's so disjointed. Is it a story about a girl struggling in school? No, because by the halfway point it abandons that setting for the Buddhist retreat. But it's not about the temple, either, because after a half hour there it bails on that, too, for the school, where no Julie is doing just fine, a perfect student and happy girl. Her growth in the film is like a light switch turning on; one day she's upset at the world, the next she has karate and all her problems are fixed. Her emotional growth is as stilted and awkward as the structure of the story around her.

The inclusion of Alpha Team doesn't make it any better. Clearly the producers felt like they needed a villain for Julie to fight, that her internal demons weren't enough and that she couldn't just go, find peace, and let that be the story of the film. So they create this half-baked "Cobra Kai-but not" stand-in. They're supposed to rule the school, be the popular bad boys who also act like hall monitors, but they come off like jerks, roided out to the point that no one likes them. There's no great evolution for these characters, either -- they start out shitty, end shitty, and fail to make any impact. The best part of Alpha Team is that one of the members of it is played by a very early in his career Walton Goggins, an actor who would go on to have a much better life after this film. 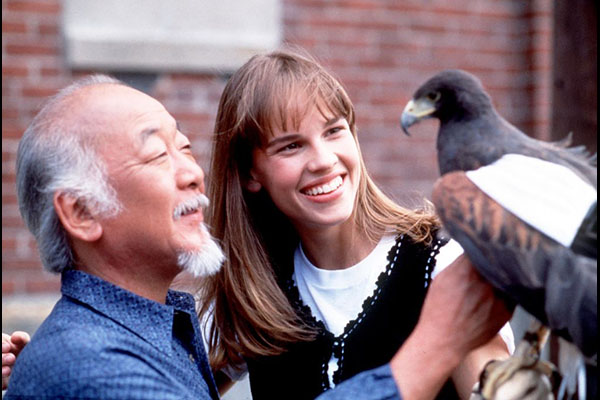 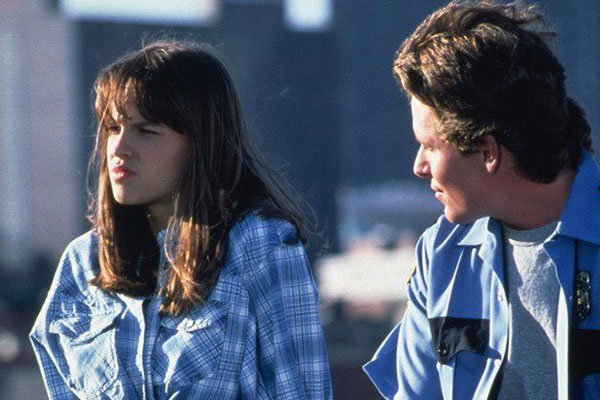 The weird thing is that this movie almost manages to be good enough. Morita and Swank are great actors and even with this threadbare, barely held together story, the two actors give it their all. There's an easy chemistry between the characters, especially once the chip on Julie's shoulder is suddenly sanded off and she becomes engaging. If the film could have focused just on them on Miyagi helping Julie find her own inner peace, it could have actually been really good. But forcing the film to have the same arc as the first movie makes it all fall apart. There's no big tournament to build to, no real reason for Julie to fight Alpha Team except that "Karate Kid films end with a climactic fight" so that's what we get. It betrays everything the film was trying to build, making for a really awful last act on an other wise okay (if not great) film.

The Next Karate Kid was never going to feel like anything more than a sad series extension for a franchise that was already running on fumes. I doubt there were many fans of the series that were hankering for a fourth tale, and certainly not one without lead actor Macchio, but anyone with any interest in the series had to feel let down by the way this film comes together. It has one good idea, backed by solid performances, but never manages to amount to anything. The film is crap, in the end, wasting everyone's time in the process. Just like the eventual series extension Cobra Kai would do, it's probably best if we all forgot this film existed.