Daniel-san and the Village The Time Forgot

I will fully admit I never got into the Karate Kid movies. My older siblings liked the films, but I wasn't that old when they came out, and but the time I could have gotten into the films I already had other interested, like the Teenage Mutant Ninja TurtlesOriginally dreamed up as a parody of Marvel's Daredevil comics (going so far as to basically reproduce to opening shots of that comic's hero gaining his powers), the Teenage Mutant Ninja Turtles not only launched a sudden boom of anthropomorphic fighting animal comics but have, themselves, starred in multiple comics series, TV shows, and movies. (which admittedly had much better fighting even in its weaker entries). An overly, dramatic movie (and its sequels) that dressed up as action films in their last acts were never going to hook me the way ninja-fighting turtles could. 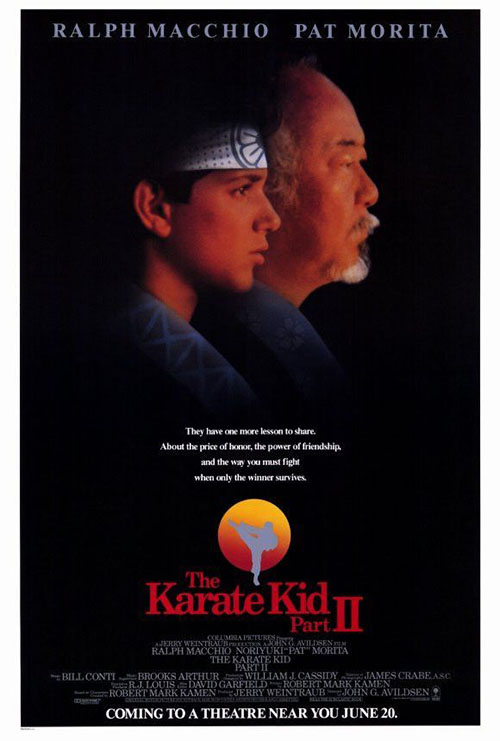 Going back and watching these movies now, though, I have to admit there was more to these films than I gave them credit for. In their construction they're certainly of a specific time -- Rocky for the Gen-X, teenage sect -- but the story at the center of the first film, 1984's The Karate Kid, still surprisingly holds up. The question I had when I started going through the trilogy was if the movies could stand the test of time; the first film, despite its overuse of montages and bad 1980s music, proved it could. Now we have to see if the sequels have that same quality.

Certainly this first sequel, the creatively named The Karate Kid Part II, proves there was plenty of gas still in the tank for the franchise. It's not a perfect sequel, essentially retreading the story of the first film but in a different setting, but it still has the purity of the characters, a solid hook to its story, and just enough karate fighting to keep audiences interested. It's certainly not a necessary sequel, by any stretch of the imagination, doing very little to actually change or grow the characters, but if the original had to have a sequel, this one does just fine.

We pick up immediately after the end of the first film, with Daniel (Ralph Macchio) and Mr. Miyagi (Pat Morita) leaving the karate tournament after Daniel just won his big trophy. Outside they find John Kreese (Martin Kove) beating the snot out of Johnny Lawrence (William Zabka), so Miyagi steps in and saves the kid while letting Kreese essentially give himself an epic beatdown. Miyagi proves that violence isn't the answer to anything, not if you can help it.

We then cut ahead by six months, with summer coming up. Daniel has been dumped by his girlfriend Ali (presumably because Shue didn't want to come back for this movie, which explains her conspicuous absence at the start of the film), and is facing having to go live in Reseda for two months while his mom does on-the-job training. But Miyagi saves Daniel from a tedious summer by letting the kid live with him. Or he would have, if he wasn't suddenly called back to Okinawa to see to his ailing father. Daniel, though, cons his way into coming along, and we're magically transported to Japan for the rest of the film. 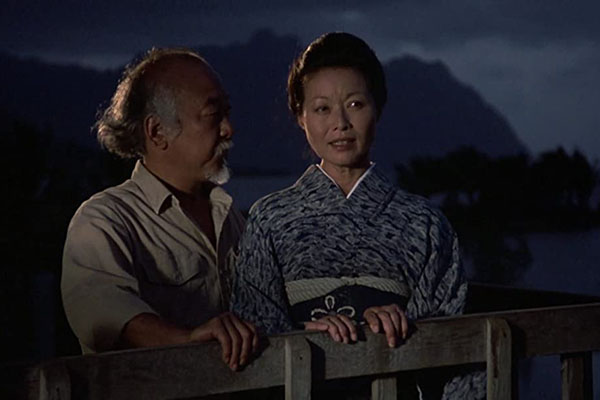 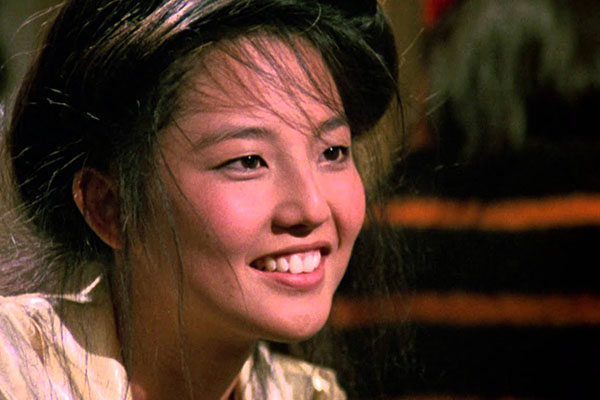 I Japan, we learn about why Miyagi left: he was in love with a girl, Yukie (Nobu McCarthy), this despite the fact that she was betrothed to another via arranged marriage, Miyagi's best friend Sato (Danny Kamekona). Miyagi declared his love to Yukie in front of the whole town, causing a hit to Sato's honor. Sato demanded a fight to the death, Miyagi fled seeing no point in fighting, and that was that. Now back in Okinawa, Sato wants his revenge, as does his nephew Chozen (Yuji Okumoto). This spells trouble for Miyagi and Daniel as they try to navigate life in this small fishing village.

On the one hand, Karate Kid II manages to avoid being the exact same movie. Another film would have built its entire confirm around Daniel and the Cobra Kai school once again, as Kreese tried to save face after the blistering loss at the tournament. Instead, the sequel takes us completely away from our original setting, telling a new story that has nothing to do with Cobra Kai, karate tournaments, or California.

And yet, at the same time, this film feels all too familiar after the first one. Daniel comes to a new place, meets a girl he likes, gains the ire of a local thug (and karate "master") who is backed by an even more powerful karate master, and tensions build until, finally, Daniel has to defeat his foe in one-on-one combat, all while Miyagi advises from the sidelines. The details are different, yes, but the film follows an all-too-familiar arc already. Of course, that's the same as the Rocky films, a series of (at this point) eight movies (and counting) that all basically feature the exact same plot line just slightly jumbled up over and over.

While the story is essentially the same, we do at least a lot to like in the new setting. For one, it's nice to see a Japanese village depicted in an American movie without the main character trying to "convert" them to American ways. Daniel respects their traditions, tries to learn all about life in Okinawa, and makes himself into a useful part of the community. The only time Daniel even comments that the USA might have something to offer anyone is when his love interest, Kumiko (Tamlyn Tomita), notes that in Okinawa she can't go to dance school because one doesn't exist, stopping her from pursuing her dream. Otherwise, Japan is left to do Japanese things, and Daniel tries to make is way in their culture. 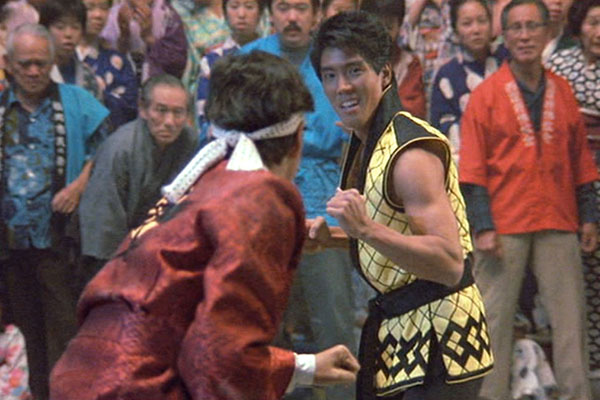 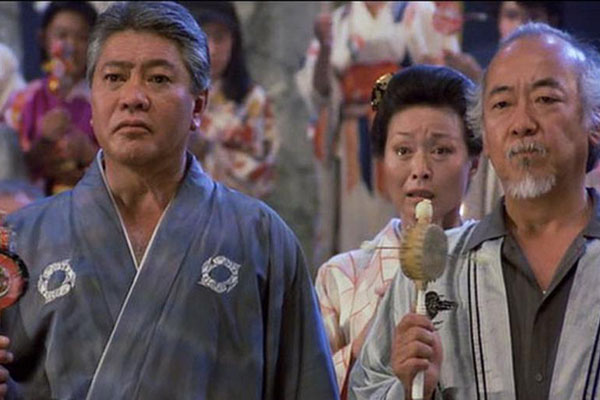 I also appreciated that this film gave Miyagi more to do. While we certainly got snippets of his life in the first film, little stories he told, here the film is all about Miyagi's life. Yes, Daniel has his own story -- the romance between him an Kumiko, his attempts to avoid fighting Chozen -- but the core story really revolves around the rivalry between Sato and Miyagi. The helps to grow the relationship between Daniel and Miyagi, growing their father-son bond while fleshing out Miyagi's back-story even further.

The downside of the film, though, is that it's villain is even less interesting than Johnny, the Cobra Kai teen leader, in the first film. Johnny, you could tell, was pushed and prodded by his friends, his high school cliques, and his sensei to be an absolute dick. Chozen, though, just acts like an entitled snob without any depth or shading behind it. I'm not saying the villains in the first movie were superb, but by comparison Chozen really blows.

And, once again, I have to note that the karate in this film, the activity that should be the one thing a film with "karate" in the title really nails, truly sucks here. Chozen's actor, Okumoto, does know how to handle himself and delivers karate that looks authentic enough for casual eyes. Macchio clearly took a few classes and has the right stance, but there's not enough power behind his blows. Morita, though, looks utterly out of his depth. The fight he has against Chozen and his goons is so laughably bad it pulled me out of the film. And while the climax has the right energy, the plotting and eventual "special move" Daniel pulls to win this time around is just as dumb and contrived as the crane kick in the first movie.

For much of the runtime, I will admit, I found myself enjoying The Karate Kid Part II, and that was utterly expected. For a film that follows the conventional formula of the previous movie (which itself followed the formula of every Rocky movie), this sequel puts in enough work to stay true to the characters and story of the original while finding a (slightly) new angle on the story. It's not a classic in the same respect as the first one, largely because it's just the first one with a new coat of paint, but it's not the unbearable sequel I initially expected. It's a solid follow up that doesn't necessarily do much new, but that's forgivable this time.

If the next sequel doesn't try a little harder, though, I'll start to hold it against the series...