The Way of Tai-Chi (Or Whatever)

Now here we go -- after two movies that I expected to be bad because, come on, "The Karate Kid couldn't possibly hold up after all this time," I thought, we finally get to a movie that really does deserve the bad reputation I slandered across the whole series. This is a tired, tedious film that does nothing more that retread the basics of the series without adding anything new. Perhaps this is why the series isn't talked about in complete, glowing terms; everyone just wants to forget about The Karate Kid Part III. 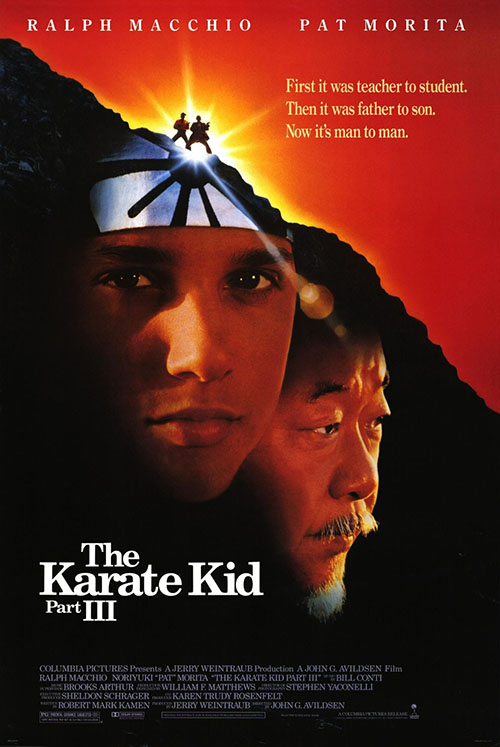 The film is essentially a retread. A new girl for Ralph Macchio's Daniel, Robyn Lively's Jessica Andrews, and new year for Daniel to putter around and train with Mr. Miyagi (Pat Morita), and another round at the All-Valley Karate Tournament. It's once again similar to Rocky in that respect where the sequels to that film retreaded the basic premise of the original, over and over, with every movie climaxing in a fight in the "ring" (whatever that meant for the loose plots of those movies) to decide the story of the film. But putting Daniel right back in the ring, against another Cobra Kai stooge, doesn't do the film any favors, leaving this feeling like the weakest of all the films in the trilogy.

After coming back from Japan (and the events of The Karate Kid Part II), Daniel and Miyagi arrive home to find the apartment complex that Daniel lived at, and Miyagi worked at, had been sold and all the residents were out on the street. Daniel stays with Miyagi while his mother (seen briefly at the start of the film and then never again) goes to take care of a sick uncle. This leaves him free to go to college, as was his plan... or not once he realized Miyagi has a dream of opening a bonsai shop, if only he had the money. Daniel gives up a semester of tuition money, paying for Miyagi's shop, and the two settle into a new business. They make friends with the pottery girl across the street, Jessica, and generally find a lot to like about being entrepreneurs.

Unfortunately for Daniel and Miyagi, John Kreese (Martin Kove), leading of the now defunct Cobra Kai dojo, has other plans for the two. He teams up with an old war buddy (and uber wealthy yuppie snob), Terry Silver (Thomas Ian Griffith), to take down Miyagi and Daniel and rebuild the luster of the Cobra Kai. First they get some teenage goons to intimidate Daniel into agreeing to go to the All-Valley championship so he can defend his title, and then make life hell for the shop in the process. Then, Silver befriends Daniel so he can convince the kid to train with him, but his training is warped and evil. Soon, Daniel is losing sense of who he is and barely doing proper karate anymore. It takes the intervention of Miyagi, and the reveal of Silver and Kreese's evil scheme, to shake Daniel back to himself. Miyagi will have to help the kid train if they hope to prove the evil of Cobra Kai on the All-Valley mat.

Frankly, this film is a mess, and it starts off bad early. Where the other films found energy in their setup, largely relying on the fish-out-of-water dynamic of Daniel first moving to California and then visiting Japan to power interactions, giving the films a sense of exploration, this film is once again set in California and can't get away with the same setup. Now Daniel and Miyagi are just going about their lives, puttering around town, and the film has definite lack of energy. The first film was over two hours long but barely felt like it, while this movie drags at ten minutes less, feeling interminable by the halfway point. 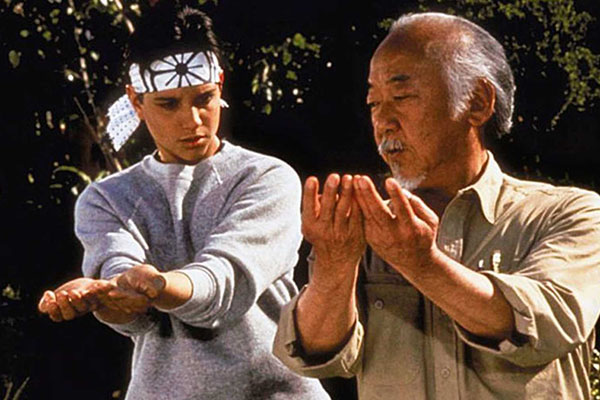 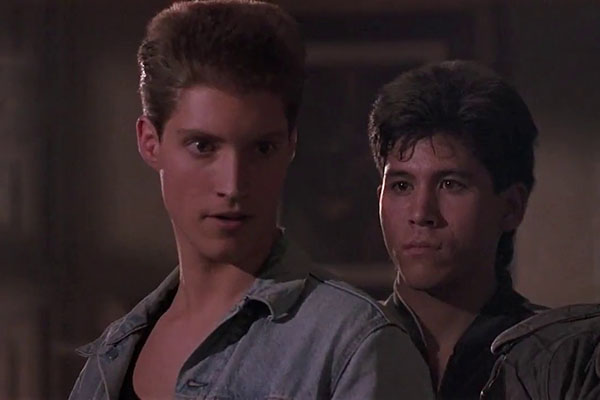 The other part of the issue, though, is that the villain's scheme is telegraphed from the beginning. We focus, for a long time, on Kreese and Silver, seeing them plot out their machinations and put everything in motion. That means by the time Silver shows up and starts hanging around Daniel, we already know what's going on so there's a sense of the inevitable about all the proceedings. We keep waiting for Daniel to clue in to what's going on, but he never does, and it takes the the villains themselves, ham-fistedly revealing their scheme to him on their own (in a mustache-twirling moment of stupidity) for Daniel to finally clue in. It's played like a big twist from Daniel's perspective, but since we already know the whole scheme the "twist" just doesn't play for us at all.

And then there's the fact that the end of the film doesn't really pay off. Silver, being rich, has already said he's opening a series of Cobra Kai dojos so, win or lose, the Cobra Kai will be back no matter what. Yes, they lose in the ring, but that doesn't mean they're gone; the film plays it as some big comeuppance for them, but what lesson did they really learn? Nothing. What lesson did Daniel learn that he didn't already know before? Always listen to Miyagi and don't trust the Cobra Kai were two lessons we already knew, so there's just nothing here. The film basically builds to a fight sequence, the conclusion of which is already known because Daniel never loses his big matches at the end of his films, so there's really no pay off at all for everything we just watched.

If the film had done anything new or different this could have been a substantially different film. Originally (as noted by early production notes), Silver wasn't going to be in this film and Kreese would have been the only villain, which at least would have made this a conflict between two agents, Miyagi and Kreese, that we already knew and could had added some depth to this story. Sadly, scheduling conflicts for Kreese actor Kove prevented that and Silver had to be written in. I think it would have been interesting for Kreese to train the boy, maybe even start off hating him before learning, deep down, Daniel wasn't a bad kid, maybe leading to Kreese changing his ways. Then, with Miyagi and Kreese both on his side, Daniel could have found new depths on the fighting mat. That's a new twist on the story I'd have liked, but I guess it was too smart a development for this film.

Finally, the love story this time around goes absolutely no where and just acts as yet another time-suck on the film. As once again noted by the production, the love interest, Jessica, was supposed to have a bigger part in the film, but at the time of casting Robyn Lively was only 16 and very much still a minor, while Macchio was already 27 (even if Daniel was 18 in the script), so the team rewrote the love story so they just developed a good friendship before she leaves halfway in the film. There's no real point to her being there, especially after we had a pretty good love story built up in the second film between Daniel and Kumiko. The fact that the film wrote Kumiko off for no good reason (especially after she pledged her love to Daniel, via tea ceremony, in the previous film) didn't really make sense, but to then replace her with a love interest that just can't go anywhere hobbles the film further. 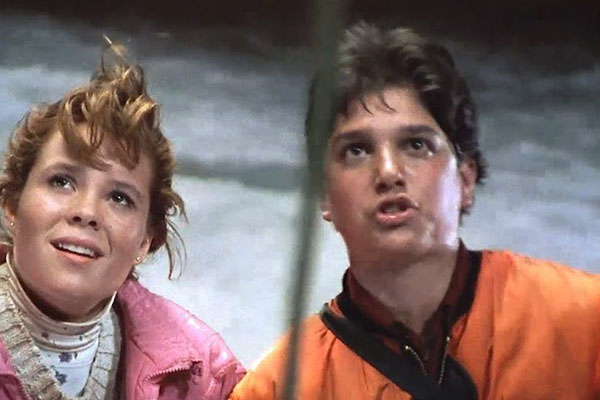 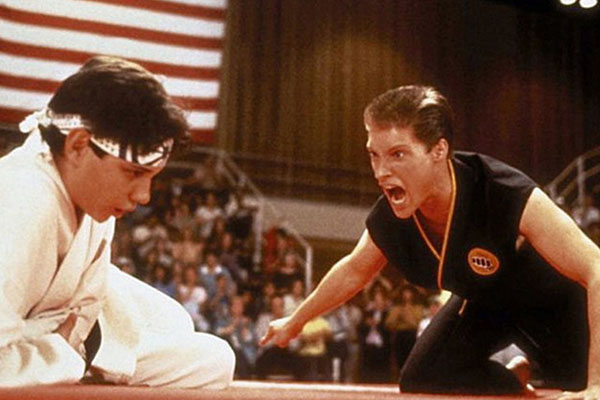 In essence, this is a film mired in production issues, forced onto the Silver Screen because the franchise still had some clout and the studio wanted to milk it for all it was worth. But the film that came to us wasn't worth the effort. It's slow, it's tedious, it doesn't go anywhere we haven't seen before, and it eventually ends in a half-baked resolution that, when you think about it, solves nothing. It's the weakest film in the series we've seen yet, and hardly a worthy follow up to the back-to-back enjoyable movies we'd seen before. It honestly would have been better if the series had just retired Daniel and let him go off to college, with Kumiko studying there too, so he could have had his happiness already.

The next film in the series does, wisely, retired Daniel LaRusso, but if I remember correctly, that's about the only smart decision the fourth film makes...