I Vaguely Remember What Happened a Few Months Ago

I Know What You Did Last Summer

It's fair to say that 1996's Scream revitalized the Slasher Film genre. Sure, there had been movies before that used the basic concept of what Scream constructed -- a masked, mysterious, and very mortal killer butchering their way through co-eds while everyone tries to figure out "why" -- but the film, written by Kevin Williamson, did it with such style and panache that it really remade the genre in its own image. After all the countless retreads within series, immortal killers doing the same old thing the same old way, over and over, the genre suddenly had life again. Slashers were cool once more. 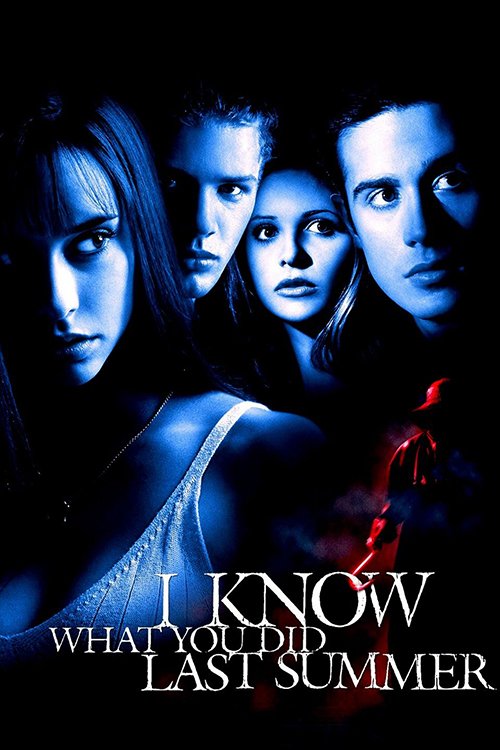 It was a short window, mind you, that the genre felt fresh and new, and with that new found energy a whole glut of Slashers poured in. Of all the films to come out, though, only one had the pedigree of Scream: I Know What You Did Last Summer, a film written by Kevin Williamson and release just one year after Scream made such a (gory) splash at the Box Office. If anything could pick up the Scream crown (short of a full-blown sequel to that film), it would be I Know What You Did.... At least, that was the thought.

In execution, though, I Know... never really rises to Scream's meta heights. Sure, the kids still talk in very mature ways, motor-mouthing through lines that make them seem more self-aware than is realistic. But the film lacks the humor and sparkle of Kevin Williamson's Slasher opus, and while it has some chilling moments, it take a long time to setup its story and even longer to really get to the meat (if you will). It tries to take a book from the 1970s and refashion it into a Slasher film, but the end result never rises as high as its pedigree

In the film we're introduced to four high schoolers -- Jennifer Love Hewitt as over-achiever Julie James, Sarah Michelle Gellar as beauty queen Helen Shivers, Ryan Phillippe as rich prick Barry Cox, and Freddie Prinze Jr. as poor son of a fisherman Ray Bronson -- who all spend the night at the start of summer living their best lives and partying before everyone heads off for college or wherever. Unfortunately the partying gets too hard and, before they know it, they've run over a guy in the middle of the road on the way back from the party. They all freak out and the guys decide the best thing to do is dump the body in the water and pretend nothing happened. This keeps the heat off of them, yes, but all their friendships, and their lives, crumble apart after.

A year later Julie comes back to town after a rough year at college only to find that her one-time-friends haven't been able to get over that one night last summer, just like she couldn't. Worse, there's someone stalking them, sending them notes about "I know what you did last summer". Soon people around the kids start to go missing, and the killer seems to be coming after them, one by one, to make their lives a living hell. Julie and her friends will have to figure out who the killer is before he (or she) manages to kill them all in revenge for the hit-and-drump-and-run one year ago. 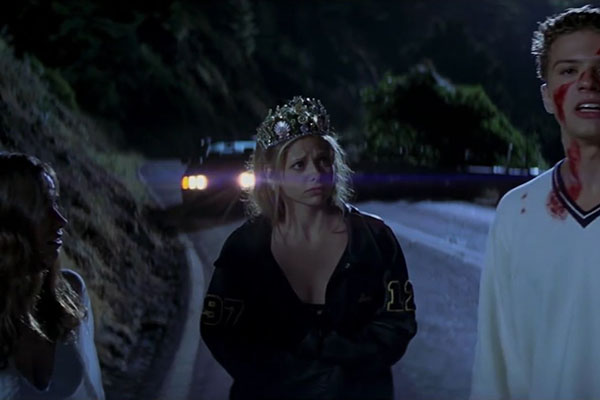 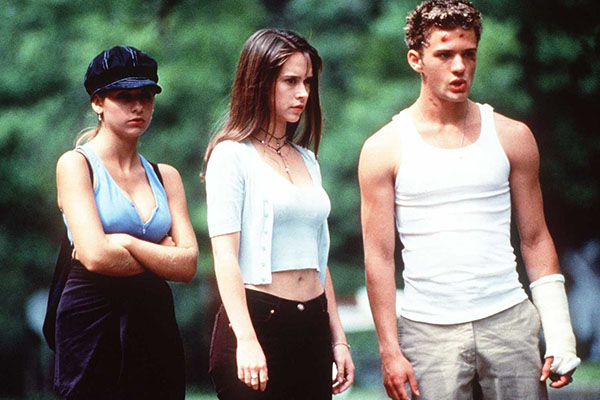 In setup there's something intriguing about I Know..., about kids making a horrible mistake and then suffering the consequences. It's a more interesting hook than most Slashers, with crazy guys that kill because, well, they want to. There's an actual motive here, a reason for the whole plot, and the teens never once make the argument that they aren't culpable, at least a little, in the events transpiring around them. In that regard I really rather liked what I Know... came up with. It's a solid foundation.

And I will credit the film in that it has a pretty solid cast. These were all twenty-something actors working at their prime, with great performances from Gellar and Phillippe. Maybe Hewitt is a little too passive in her performance (and issue I've always had with her and anything she's been on), and sure Prinze, Jr. seems a little glassy eyed most of the time (he's always been better at comedies than drama), but these four are still miles better than most Slasher film casts (better than everything except the Scream films, really). The film doesn't suffer from terrible acting, that's for sure.

There are even moments of solid horror. Many of the stalking sequences are on point, doubly so for the few times where the characters don't know they're being stalked and the film lets the tension build. Good horror is more about the build up leading to the release than the actual moment of horror itself, and the film often realizes this, crafting solid sequences that can build. The only issues, though, is that there just isn't enough of this, not enough scares to pad out the film, not enough reason to watch these characters run around.

As I noted, the film takes a long time to get to the good stuff. There's a lot of time spent with the characters trying to solve the mystery of who wants to kill them. First they think its the guy they ran over, then they think it's a friend of his, and then they realize it's someone else altogether. It's a back and forth, on and on, just drawing it out for no reason. Worse, the killer isn't even someone in the main cast so anyone trying to guess what's going on won't be able to. It's a bait-and-switch without pay off, and it deflates the film. It's hard to care what happens to the killer if you don't know who he is at all. 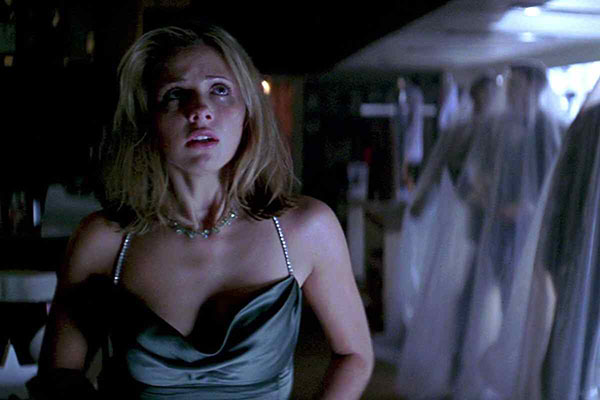 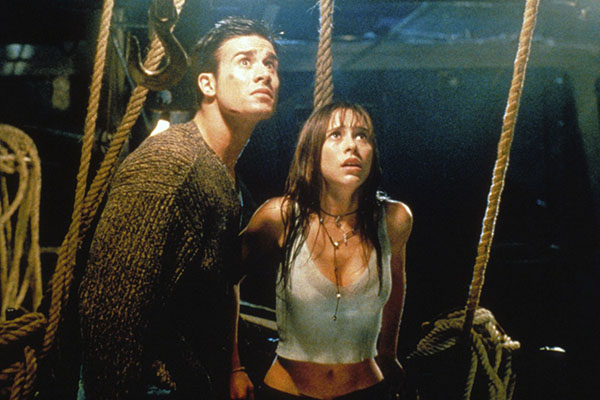 Frankly, too, it's hard to care about the teens, either. They did a bad thing and then, when they should have made it right the compounded it instead. And then, a year later, we're supposed to somehow care of they start getting killed off one by one? Hardly. Especially when most of the characters it the film are barely-sketched characters (no matter how much the actors try to elevate them with good performances), introduced with a single personality type and then killed off before they can get interesting. It's hard to care about anyone in this film, good or bad, with the way the story treats them.

And while the tension is pretty solid, the kills themselves are mediocre at best. The film is oddly bloodless, with a few kills but barely any gore to show for it. It's like the producers knew they were getting an R rating, because the characters all say "fuck" a lot, but then didn't want it to be too hard of an R. Maybe some kiddies could see the film if they kept the gore to a minimum? It doesn't work, and leaves everything feeling empty and pointless. If you can't have a good killer, or a good story, at the very least you can go with the prurient interests of the audience and give us some blood and gore. This film hardly delivers.

I ended up wanting to like I Know What You Did Last Summer more than it deserved. There's a solid idea here that could have made for a much better film, but the execution is lacking. The film tries to set itself up as the next Scream -- same writer, another actress from Party of Five, put out one year after Scream -- but it never nails it. It's a good try, but it lacks everything that made Scream a proper hit. It's lacks a soul.

Teenage drinking. After their friend wins the beauty pageant, our group of "heroes" all go to the beach, tells stories, and get drunk. Then they drive home (drunk driving!) and then set the whole film in motion.

The man the four kids hit-and-run-and-dump. Barry gets drunk, gives his keys to Ray, and all four -- Barry, Ray, Julie, and Helen -- drive home from the beach. Barry turns up the music, spills his alcohol everywhere, and distracts Ray, who doesn't see the guy curled up in the road, so they hit him with Barry's car. Then, freaking out, they decide to dump the body in the lake so no one finds it.

Except, of course, this really isn't the first kill as that guy they hit isn't really dead (and they guy they think they killed probably really committed suicide). Instead, the first real kill is their loser acquaintance, Max Neurick (Johnny Galecki), who's just minding his own business whtn the Fisherman comes up and hooks Max. It's really a rather artless kill, all things considered.

Five, not counting the guy the teens kill (since the killer really didn't die from this incident), but including two of the teens that ran the guy over, a cop, and two innocent bystanders that just happens to know them.