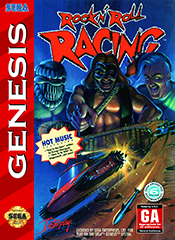 (Editor's Note: For the purposes of this review, the SNES version of The Lost Vikings was played. Both versions of the game are the same, so your system preference will affect which copy is best for you.)

I find it funny (although not unusual) that most of my childhood memories revolve around video games. Take Rock n' Roll Racing, as an example. I can remember many days sitting around playing on a copy of this I borrowed from a friend (this game was hard to come by when I finally wanted it), trying just to earn up a few more dollars for my next upgrade...

It's an evil, addictive game, I love it.

The premise has been done before (although, in my opinion, not always as well as here). You are a professional driver competing in a galaxy-wide racing circuit. You have, at your disposal, an increasingly impressive selection of cars to buy and improve. Your goal is the be the first across the finish line, or, at least, to destroy as many of your opponents, and collect as many bonuses as possible so that your races aren't a complete wash.

It doesn't like much, admittedly, but the game has two things going for it: style and skill.

On the style side, all the graphics are highly polished (well, for SNES era graphics). Your camera is at a fixed angle the entire time, meaning that throughout the course of a race you'll see your car from 360 degrees as it drives around the track. The sprites for the care animate smoothly throughout the race, never showing chunky transitions between angles. Additional spit and polish was then added to the animations, with crisp reflection effects detailed in the various sprites.

Couple that with the fact that there is absolutely no slowdown in the game. Admittedly, only four racers are on screen, ever, at a time, and even with weapons, mines, and other effects on-screen, the sprite count is never ridiculously high. I consider this a blessing, though. The developers were smart in keeping the sprite count low, as the racing never starts to hitch. The game has a precise feel too it, aided by the wise decisions in the graphics department.

Plus, you get a great soundtrack. This is Rock n' Roll Racing, and so the developers brought the rock. Several classic rock tracks are included, although they are instrumental versions of the songs. While the songs aren't the best covers ever (especially not in this post-Guitar Hero era), and the soundtrack isn't that deep (again, tainted by the passing of time), it's nice to have solid, rocking music to drive to; music classics like: "Bad to the Bone" by George Thorogood, "Born to Be Wild" by Steppenwolf, "Highway Star" by Deep Purple, "The Peter Gunn Theme" by Henry Mancini (also made popular in the NES Game Spy Smasher!), and "Paranoid" by Black Sabbath.

The game is, in so many ways, skillfully polished -- the previously mentioned slowdown being just one example. The controls for all the cars are smooth and responsive. It never feels like you have to finesse the game to get it to do what you want. You can play it, and learn it, quick and spend plenty of time enjoying the game without feeling like you're fighting it.

If there is a quibble with the controls it's that the cars aren't that different in feel. Sure, they each have equipment they can use that differentiates them from the other vehicles (and as you get into the later cars, some of them have better versions of equipment to buy). But, when it comes down to choosing one car over another due to handling, there really isn't even a choice to be made. They all control relatively the same, and have the same "weight" to them. This is the one aspect that has really been hurt over time, as later racing games (and even Grand Theft Auto style games) have made car weight and feel such an integral part of the experience.

This is, however, minor in comparison to the two most annoying features of the game. For one, the game uses a weird password system. The passwords are long and annoying (multi-segment-multi-digit passwords), which often lead to you writing something down wrong, and then not being able to progress later. This was in the era of battery saves (it was a SNES game!), so why they went with passwords is beyond me.

The other major gripe is with Larry the Announcer. He is turned on by default (although you can turn him off), and he has the most obnoxious voice. Couple that with the fact that he doesn't have very many lines (leading to you hearing the same ones several times during one short race), and you've got a feature that should have been ditched before the game was released.

All griping aside, though, the game is addictively fun. If you can find it, I highly recommend picking it up. It's a must-play time waster.