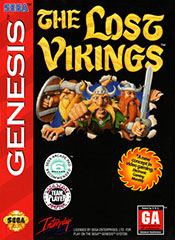 (Editor's Note: For the purposes of this review, the SNES version of The Lost Vikings was played. Both versions of the game are the same, so your system preference will affect which copy is best for you.)

In the distant past, back in the time of the Vikings (and we're talking actual, rummage and pillage Vikings, and not the guys the "LARP" as vikings), there were three bothers, vikings by trade. These brothers went a-viking (by ship, of course) only to be captured by an evil space alien.

Realizing that the only way they would ever get would be if they escaped, they broke their way out of the space prison and adventured through the inner bulk of the ship on a quest for the exit.

Only to then get transported to other regions and worlds where they had to do more adventuring, just to get to yet another exit.

The easiest way to describe The Lost Vikings is as a puzzle game, not entirely unlike Lemmings. You have to take your vikings through increasingly long and ridiculous levels, to reach the end, the exit, and the next odd, puzzle-like level. However, there are a few key differences.

Most notable is that you only get three vikings (as opposed to a horde of Lemmings). More important is that all three Vikings have to actually survive the level. If you lose them (due to untimely death), it's back to the start of the level for another go-round.

And believe me, by the late stages of the game, you'll be seeing that restart screen a lot.

Another major difference from Lemmings is that each of your vikings has set powers they can use to navigate the levels:

Erik is a speedster. He can run and hit things with his helmet. He's also the only one of the three vikings that can jump.

Olaf is a big, slower character. He has a shield, which he can use to deflect attacks. He can also glide with it if he holds the shield above his head.

Baelog is the weapons expert. He has a sword as well as a bow and arrow. The bow serves double duty, also being useful for hitting far-away buttons.

These three skills come into play more and more often as the game progresses (as they should in any good puzzle game).You will find yourself in tougher and tougher situations, trying to decode the esoteric nature of many of the puzzles, slamming your head against your shield,crying out the gods in anger while they sit in Valhalla, drinking brewskis and and mocking your very existence.

If there's any major flaw with the game, it comes from the puzzles (they very things that are also it's great strength). As fun an interesting as the puzzles are, often times there's only one solution. Other games of this nature let the player experiment, trying to find new ways to do the same old thing. In the Lost Vikings, because you only have three characters with six total options of what to do, there's only so many ways to combine those things, and it becomes a matter of just trying to find the one path through the labyrinth that the designers devised.

However, it will take you a long time with the game before that becomes a big problem. The learning curve is gentle (mostly because there's a ton of levels) so you never feel over your head... at least, not until you're deep into the game and in way over your head. Even then, after you manage to get through a level (playing it over and over for a few hours), there's a feeling of accomplishment that makes the game worth it.

The game is fun, unforgiving at times, and totally addictive. It's a must play, so go out, get it, and play it already.