Not Quite Smart Enough

Yesterday we talked about the 1994 revival of the classic 196s Western, Maverick. That was a film that seemed to understand the basics of what made the original series (and all its revivals) watchable but missed the mark on its leading man. Today we have another film that does essentially the same thing: revival series, gets the basics of what was funny, but still manages to miss the mark. As classic hero Maxwell Smart would say, "missed it by that much." 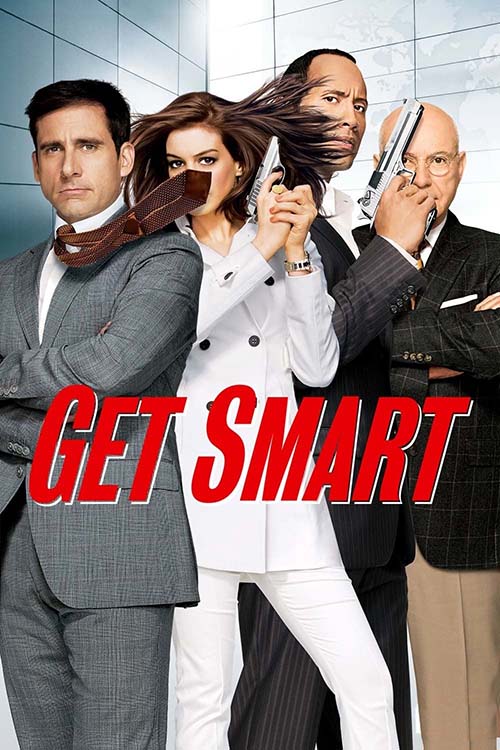 For those unfamiliar, Get Smart was original created by Mel Brooks and Buck Henry and served as a parody of James BondThe world's most famous secret agent, James Bond has starred not only in dozens of books but also one of the most famous, and certainly the longest running, film franchises of all time. and other spy stories of the era. It focuses on CONTROL, a worse version of the CIA, as they battled against the evil of KAOS, the evil organization dedicated to badness and such. it was very much couched in the Cold War storytelling of the era, just with the desire to take the piss out of all of it. The reason it worked so well wasn't just the writing, which was great, but also Don Adams as lead character Agent 86, Maxwell Smart.

The series really went in on making fun of everything that was done so seriously in all those spy films and shows. The gadgets, the fights, the suave leading man. Nothing could go by without a joke, or a crack, or a sight gag. It was a densely packed show that made you laugh, on and on, as you'd expect from something of that era with Brook's name attached. It's no wonder that the series ended up with a theatrical film, a TV movie, and a 1990s revival before it all finally wrapped up. It was that good.

The primary issue with the 2008 revival of Get Smart is that while it recognizes the individual pieces of the original series that were funny -- the famous lines like "missed it by that much" and "would you believe...", the gadgets like the shoe phone and the Cone of Silence, the idiotic plans of KAOS -- it doesn't really know how to mix it all together in that laugh-a-minute patter that the original show had. This film is amusing, and even quite funny in spots, but it doesn't hold a candle (which it comes to sheer humorousness) to the original series. But then, even the other continuations struggled with that as well.

There's also the fact that no one can really play Maxwell Smart quite like Don Adams. Steve Carell is a funny guy, and he does try to put his own spin on the character. Instead of the bumbling version played by Adams, Carell's character is competent and steely eyed (or, at least, tries to be). The film, though, doesn't want some new interpretation of Agent 86, it wants the same guy. Thus Carell's version of the character bumps up against the films expectations for Maxwell, leading to a very confused depiction, something that pulls the character in two different directions at once. 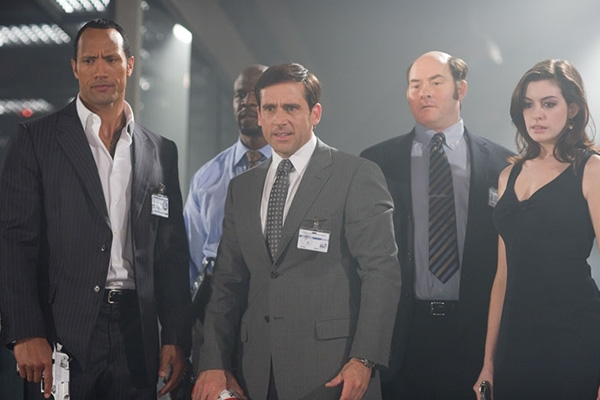 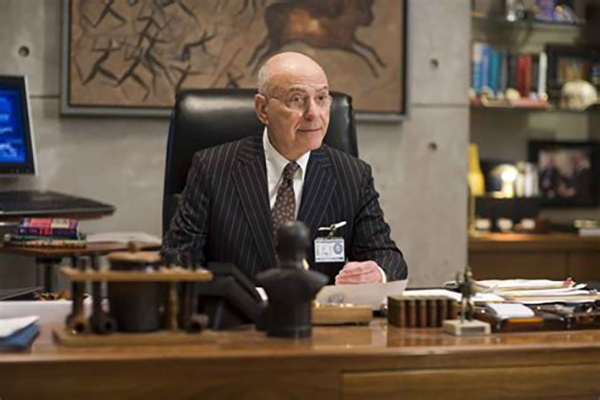 The film itself finds Maxwell Smart at the start of his career as an agent. He works at CONTROL as an analyst, and he's one of the best. He listens to everything, picks up on all the dirt that KAOS agents discuss, from the most mundane onwards, and remembers it all. Thus, when a case comes up, Max is the guy to talk to about what is really going on because, frankly, he knows it all and can give in depth analysis of the situation on the fly.

He doesn't want to just be an analyst, though, so for years he's been training and working to become an agent. Then, when KAOS gets all the films on current agents and starts assassinating CONTROL's best men, the Chief (Alan Arkin) pairs Max up with Agent 99 (Anne Hathaway), who herself has just gotten a new face and is thus unrecognizable, and send them into the field to track down the head of KAOS and find out what the real plan is. Our analyst finally gets to see what it's like out in the field, and it's not what he expected at all.

Some parts of the film do work well. I like the casting of Hathaway as Agent 99 as she brings the right energy to the role. 99 was always the competent one of the duo and Hathaway clearly relishes getting to play a female version of James Bond, in effect. Frankly, I could do with more spy stories with Hathaway in a lead role as she kicks ass. Dwayne "The Dwayne" Johnson is also fun here, getting to play action hero and comedic foil at the same time. His role isn't big, and he doesn't have a huge presence (physical stature notwithstanding) but he's a fun addition to the movie.

There are also bit of the movie that are really funny. A sequence with Carell's Smart listening in on two KAOS agents chatting in a bathroom while Smart is also peeing was genuinely hilarious. A fight sequence interrupted by the remnants of a beaded curtain also leads to a good laugh. And there are a few moments of good word play that elicited chuckles as I watched it (yellow cake versus yellow cake). It was really amusing for a few moments at a time. 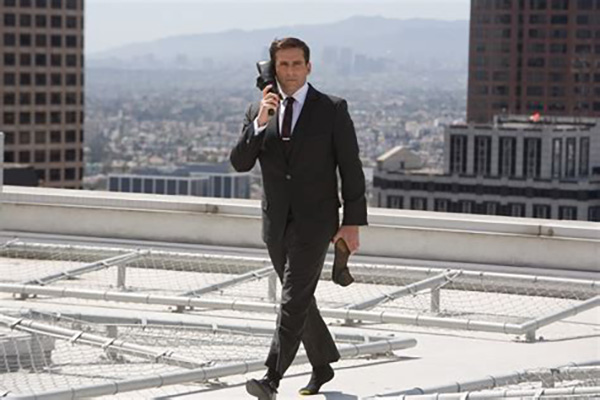 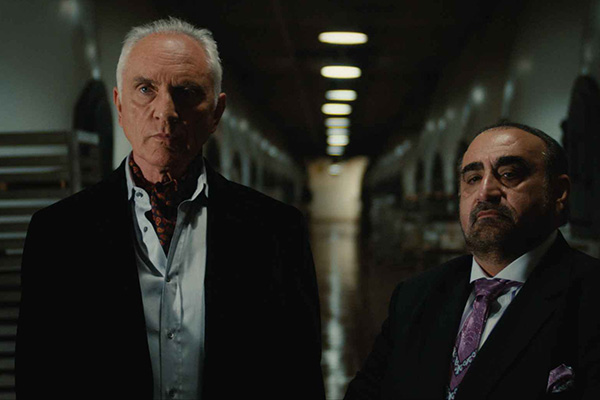 With that said, there are plenty of times where the film doesn't quite nail a gag, or doesn't even bother trying. Some things the film thinks are funny, like the obnoxious Agents 91 (Terry Crews) and Larabee (David Koechner) could have been excised entirely as they aren't in the least bit funny. And Terence Stamp's Siegfried feels like he wandered in from a much more serious, less amusing film. He doesn't work as the head of a cell of KAOS, not at all.

But I also think, really, the whole premise of Get Smart doesn't work now. The politics of the world are very different from six decades ago so the whole concept of a good spy agency working against a single bad spy agency feels pretty outdated. The film doesn't spend any time delving into how KAOS works or who they really serve, leaving us with little reason to really care about the good vs. bad dynamic. The film either needed to invest more deeply in its world or it needed to be funnier. It does neither.

I didn't hate the 2008 Get Smart; it was watchable enough. But when you compare this film to the original series, with its dense jokes and constant patter, this film falls far short of the mark. While the original series is dated its also still very funny. It's possible, all things considered, that maybe this is a franchise that works better in its original form and just doesn't need a reboot to be relevant. Go back and watch the original with Don Adams and laugh at its silliness. Once you've seen this new version once you probably won't go back to it again.