Bottom of the Eighth...

I am not one, normally, for sports movies. I'll watch just about anything, of course, but it generally has to be about a topic I'm interested in, even if just a little. Good drama and good drama, of course, but if I were to pick up a movie about, say, Cricket players I'd need the movie to give me some pretty detailed notes about what goes on in Cricket so that I would be able to follow along with the movie. There's a scrum in Cricket, right? And something about Wickett the Ewok. That's as far as I got. 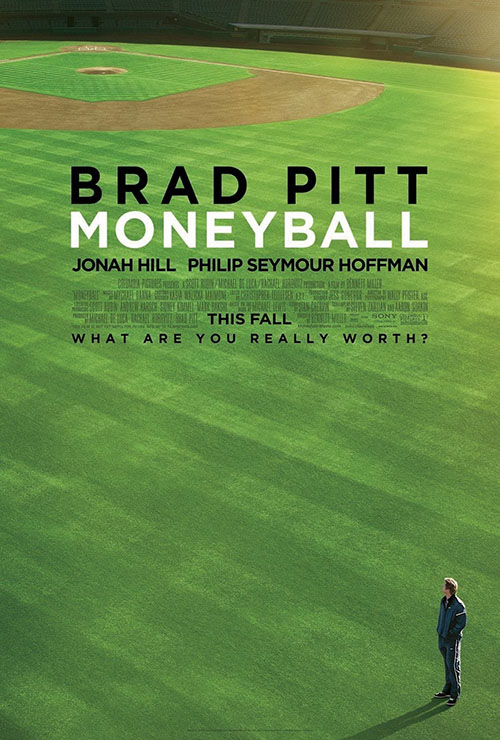 My point is that my cultural knowledge, when it comes to sportsball, is limited, and that's because I'm not a sports guy. We don't have a sports commentator here on staff at Asteroid G (and if we did we probably would have fired them for talking about things we don't care about), so a film like Moneyball would normally pass us by. And it did. For eleven years. I doubt I would have even bothered watching it still were it not for that fact that I'd just covered Aaron Sorkin's Molly's Game for the site and, during writing that review, I learned that Moneyball was also written by Sorkin, and when this film showed up on NetflixOriginally started as a disc-by-mail service, Netflix has grown to be one of the largest media companies in the world (and one of the most valued internet companies as well). With a constant slate of new internet streaming-based programming that updates all the time, Netflix has redefined what it means to watch TV and films (as well as how to do it). it then seemed right.

When it comes to a movie like Moneyball, having a love for the sport probably does help to make this film more engaging. It does play to the strengths of Sorkin's writing style. The writer took over a script from Steven Zaillian and made extensive rewrites, converting it from a more documentary style that director Steven Soderberg wanted to something more Sorkin-esque (once Soderbergh left and was replaced by Bennett Miller). The result is a film that feels like a Sorkin work, with fast talking, fast moving characters that keep the story trucking. But to really care about what's going on you have to be able to invest in the trials and tribulations of a low-rated baseball team and, if you can't do that, then you might find the buy-in for Moneyball to simply be too high.

Billy Beane (Brad Pitt) is the general manager for the Oakland Athletics who, in 2001, managed to get to the playoffs for the season only to get totally shut-out by the New York Yankees. Heading into 2002, three of the team's best players were lured away to other teams that could pay better (as the Athletics have a lower amount of money they could spend on their players than other teams, like the Yanks). That leaves Beane with a giant hole in his team, one that his scouts want to fill with similar players. But then, if the Athletics can't pay as well as other teams, how do they get said players?

The solution comes to his courtesy of Peter Brand (Jonah Hill), a Yale-graduate with a degree in economics who, for some reason, was working on the management team for the Cleveland Indians. Brand explains to Beane that stats were more important than the gut instinct for players that the scouts were using. A player might look good, but if his raw stats weren't there then they weren't worth hiring. Players that can simply get on base were more useful to the Athletics than big scores, or big moves, or flashy players. Between the two of them they find a roster of cheap players who had the stats but, for one reason or another, weren't desirable to other teams and, over the course of a season, prove why the number don't lie. 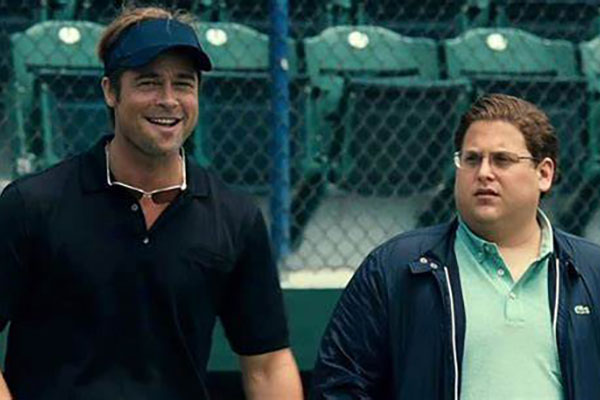 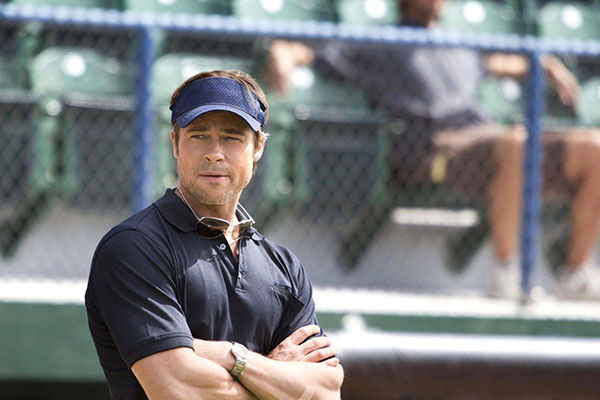 Moneyball is, in essence, about two things: baseball and numbers. To care about this story you have to really care about both the baseball and the numbers. The film kinda sorta tries to slide you in to the discussion so you get what the guys are talking about, but if you don't have a feel for the numbers then you aren't going to be able to get into the film. I could just about understand, "he gets on base," but I didn't leave the film knowing how they managed to come to that conclusion.

You also have to really like the inner workings of baseball and enjoy seeing people discussing what it takes to make a good team. You aren't really going to see much of that on the field because, legitimately, there isn't much "on field" time depicted in the film. All told there might be five minutes max spent establishing players on the field and a few key moments for the team. The rest is spent in offices, in recording booths, and in lockers. This is a baseball movie with very little actual baseball. That's not going to be for everyone.

The worst of this comes during the A's 2002 run up to the playoffs when, suddenly, the team finally clicks and they end up winning 20 games in a row. The movie makes a big deal about them managing to break that record, setting a new standard for consecutive wins and, one would think, proving that the so called "moneyball" they're playing, actually works. Except we don't see anything from those games, we just take the numbers the movie is throwing at us as "something special". More time on the field, seeing these players actually carry out this grand master plan, would have helps to sell how moneyball actually worked.

The film is, instead, mighty focused on Beane and Brand. It's all about them, their plan, their work relationship, their growing friendship. It's a story about the Athletics, but really the team is just a bunch of pawns for these two numbers nerds, and it really could have been about any team. It could have been a fictional account of a fictional team manager and it would have had the same impact as actually basing this film on a real story of the Athletics You have to care about Beane and Brand because they're the only real characters we're given. 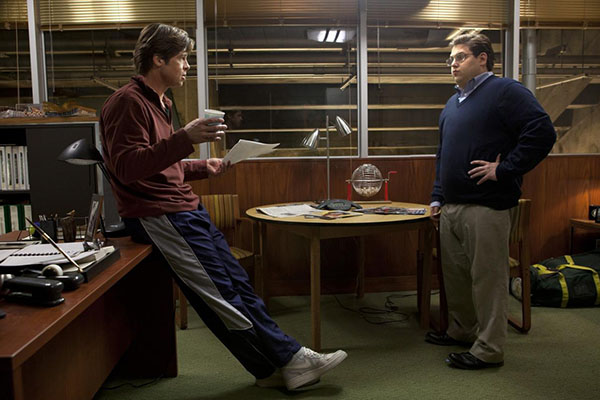 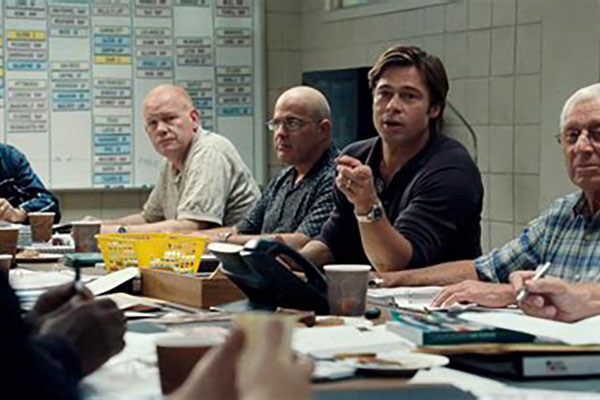 It's disappointing because there's plenty of interesting stories that could have been mined from the B- and C-grade players that are brought in for cheap. To the players, this is their redemption arc, their one last chance to prove they have what it takes to play Major League Baseball. The film starts with Beane and Brand but it needed to grow out and encompass what moneyball meant to the players that got to be on the team. There's a real story to be told there that is barely touched upon at all by the movie.

You can tell Sorkin thought about the players while he was writing the script. He gives a couple of moments to some of them, showing how one has a fear of playing first base (which he's assigned), another is old and on their way out this season or next. Watching them grow themselves into their new roles would have made for great B-plots, but just as soon as these ideas are raised the plot lines are dropped, never to be seen again.

I think a big issue is the way this script came together. Soderbergh wanted one kind of film, something that would have gotten into the analysis of it while touching on interviews with the players. Miller and Sorkin, though, focused on powerful men doing big deals which sucked all the life out of the stories of the players before casting them aside. Make no mistake, Pitt and Hill are good in this film and they make their characters compelling. But baseball isn't just played by two guys, no matter what Moneyball might show otherwise.

I can see why this film did decently at the Box Office, pulling in $110 Mil against a $50 Mil budget. It's slick, its quickly paced, and it has a few decent moments that help to carry the film. Sorkin does his Sorkin thing with the script, and his formula and writing style do work. I just wish more time could have been invested in other characters to really show the true impact of moneyball on the team. As it is, the film leaves all that off camera, sucking much of the dynamic energy out of this story.