Hail to the Chief

If you had asked me years ago if I'd become invested in a political drama, I doubt I would have said yes. While have an odd affection for period pieces (while writing this I have Hulu's new show, The Great, playing in the background), current political drama doesn't normally catch my eye. Generally it's all too idealistic and unrealistic, a way of trying to paint what "should be" that tends to stray from what what could actually happen. It's artifice about (let's face the reality of politics) artifice. 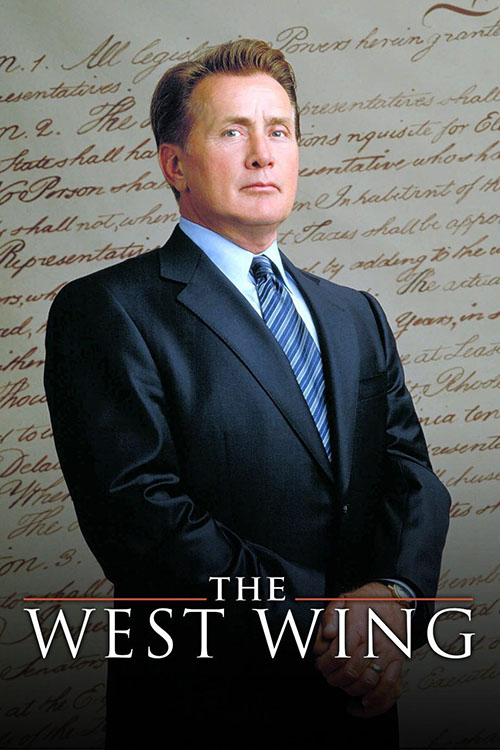 And yet, for a long while there the cable TV network Bravo would play regular marathons of The West Wing, the NBC series about fictional U.S. President Josiah Bartlett (Martin Sheen) and his team working out of, naturally, the West Wing of the White House. The show was oddly compelling, powered by great performances by the cast -- Chief of Staff Leo McGarry (John Spencer), Deputy Chief of Staff Josh Lyman (Bradley Whitford), Communications Director Toby Ziegler (Richard Schiff), Deputy Communications Director Sam Seaborn (Rob Lowe), Press Secretary C.J. Cregg (Allison Janney), Personal Aide Charlie Young (Dule Hill), Josh's assistant Donna Moss (Janel Moloney), and of course First Lady Abbey Bartlet (Stockard Channing) -- solid writing, and good cinematography. It was the kind of show that could suck you in with an episode and then suddenly you've watched six hours of a marathon without realizing it. I speak from experience.

Masterminded by Aaron Sorkin, the series was essentially a "spiritual sequel" to the writer/director's political romance, The American President (that movie also featured Martin Sheen, that time playing the Chief of Staff to a different president). As the story goes, someone from the studio came into Sorkin's office, saw the poster for The American President and said, "you know, you should do that as a series." That got the thought going for Sorkin and, four years after that movie was made, The West Wing debuted.

The TV series does exhibit all of Sorkin's usual flair that made many of his movies big hits (it also features many of his flaws as a writer, too, to be fair). By this point Sorkin had already seen success with his script for the smash hit drama A Few Good Men, and then used that clout to make not only The American President but also his well-liked, but not successful in the ratings, TV show Sports Night. All of those projects, and many of his works since (The Social Network which won him an Academy Award, as well as the less-beloved Studio 60 on the Sunset Strip and The Newsroom) have shown off Sorkin's flair for whip-crack dialogue along with prescient political material. Sorkin is very much a writer with a specific viewpoint that he writes from, but it's the The West Wing, more than any other of his productions, where I think he found his best success.

Part of what makes The West Wing work so well is its dynamic pace. The characters on the show are constantly talking, constantly moving, working throughout the West Wing (as well as at special events) to forward the agenda of the Barlett (D) Administration. They have fast-paced conversations, walk-and-talk meetings about whatever agenda item they're currently focused on, as they continue to try and do what's best for the country. Seeing them work, being so passionate about their time in office, makes you care about the work they're doing (fictional or not). 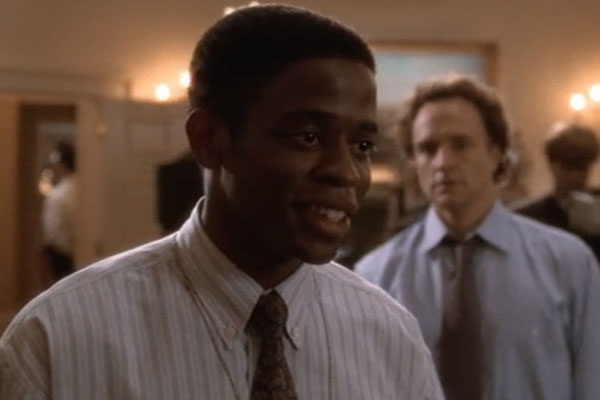 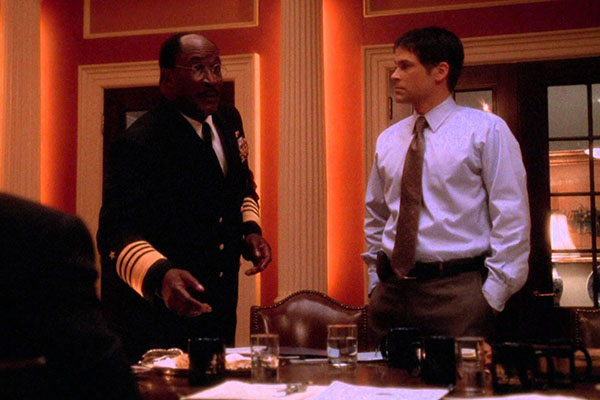 That idealism is part of the charm of the series. If these characters were beat-down, pessimistic political hacks the show wouldn't work (or, at least, it'd be a very different show more akin to Veep). But The West Wing in infused with idealism, with characters that truly care about the fate of the administration (and the country) and doing the best they can for their constituents. Watching the series you understand why people would want to do these jobs, and it leaves you hoping that all politicians are this dedicated, this idealistic (when reality, especially under the Trump Administration and with McConnel's Senate, is anything but).

This show is very inspirational, from Sam Seaborn giving a speech about education, to the President himself knocking down an ultra-conservative with a stick up their ass. They have morals, they stick to their ideals, and they are able to eloquently say why what they're doing matters. Everyone in the West Wing is a good person with strong ideals that desperately try not to compromise their beliefs, and it makes you want to spend time with them, to see them accomplish their goals.

Or, at least it does if you share their ideals. As a life-long Democrat I certainly agreed with what the characters were espousing and wanted to live in a world where they were able to accomplish their goals on a daily basis. That said, I could see how this show would be a tough pitch for any life-long Republicans as the show is written almost entirely from the Democrat perspective (it wouldn't be until the second season that a Republican character, Ainsley Hayes, would be added to the regular cast). Very few characters from the "other side" are featured, and they're almost always the villain (or attached to characters that are explicitly villains), meaning the show very rarely has anything close to a balanced viewpoint. And while I'm not saying the show necessarily needed a truly balanced viewpoint I do think it would have benefited it some to at least paint some of the opposition characters as something less than nefarious, mustache-twirling villains once in a while (this is something it gets better about down the road).

But, the biggest flaw of the show (especially in its first season) is that it doesn't really handle its female characters well. While the menfolk get to have long conversations about ideals and the good of the country, the women are often relegated into secondary storylines that aren't as dynamic or powerful. C.J. is the only female character with a substantive role, being high enough in the administration that she had to be treated as a power player. But other characters, like Donna or (the much reviled by fans) Mandy Hampton (Moira Kelly) are relegated to being comic relief with plot lines that, more often than not, paint them as flighty flibbertigibbets. And that's before the show, from time to time, decides to "praise" the women by talking down to them, often in speeches that read like backhanded praise (a problem that plagued many of Sorkin's later works as well). 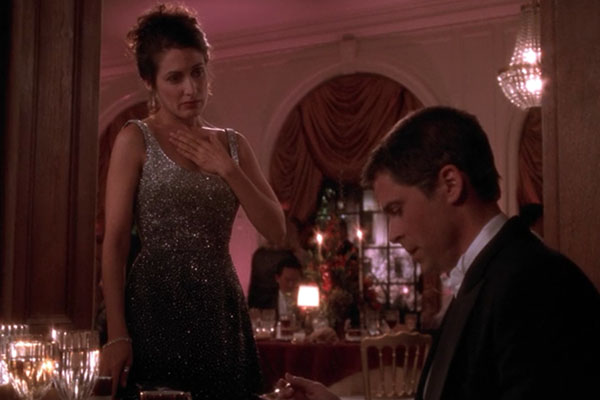 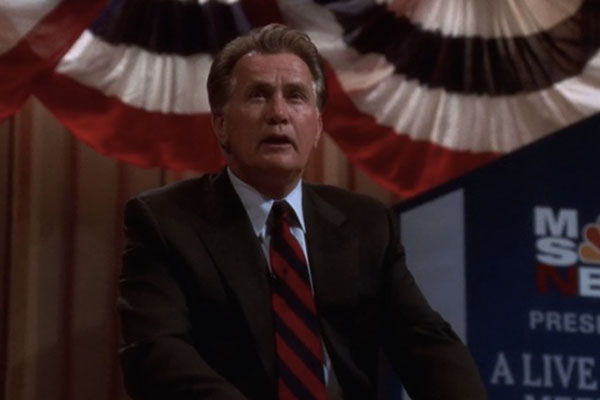 Many of these flaws get worked out after this first season, which is part of why the show remains as watchable as it is. This first season is rough, yes, but it has heart. And the fact that it does improve, that it trims out useless characters (Mandy, who never really gelled with the rest of the characters) and finds a better voice for all the cast (of both genders), helps to explain why it became as beloved as it is. The first season may be flawed but it was still really good TV, and from here it only got better, becoming one of the classics of political dramatic television.

Toby is the show's curmudgeon, a perpetually cranky character with a sour look on his face (played spectacularly, to be fair, by Richard Schiff). His character is defined by the fact that he cares deeply about what he's doing but the world continually lets him down with that pesky thing called "reality". In this particular episode, though, we get to see a bit of Toby's heart as he gets drawn into a case of a dead homeless veteran. The veteran fell asleep on a bench and frozen to death overnight, but he had an old coat that Toby had given to Goodwill with Toby's card in it, so assuming Toby knew the man they called him in to ask about their "relationship". After, though, Toby goes out of his way to find out about the veteran, to arrange a proper military burial for the man, and to find his family so they could attend the ceremony.

It's an episode of the show that illustrated The West Wing at its best. It had heart, but it also shows that there's a problem in this country where many of its veterans end up homeless. And it says, via Toby, that we really need to do something about that and give the veterans the respect they deserve. Powerful stuff there, and handled really well in this episode.

Also, at the end of the episode, when the Marines give the veteran his burial, that's a real Marine Honor Guard. Pretty damn cool. 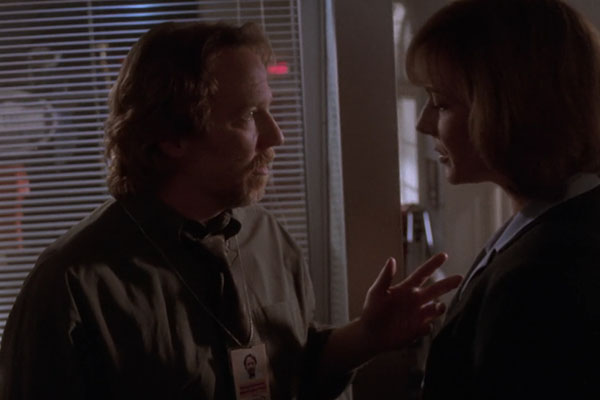 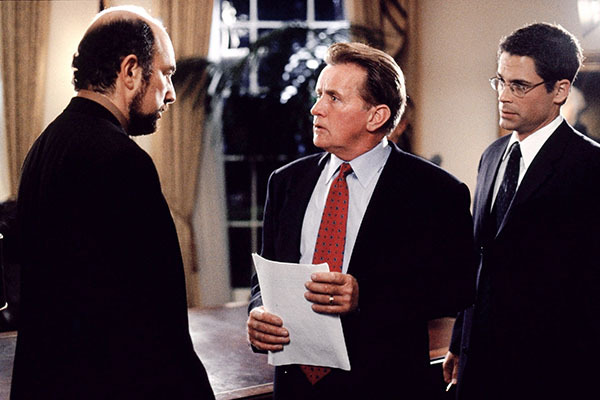 Episode 5: "The Crackpots and These Women"

This episode really isn't that bad. For fans of the show, it's nice to see the first instance of "Big Block of Cheese Day", a recurring event on the series where staff have to talk to "crackpots" who normally wouldn't get meetings at the White House. What I hate about this episode is the ending where all the staff are gathered together and Leo and the President make a little speech about all the women in the cast and how they should honor them. The sentiment itself is nice, but the way it's handled it's like the characters are talking down to the women. "Look at them, aren't they cute? They try so hard." It grates on my nerves every time and ruins a perfectly decent episode.

Mandy Hampton (Moira Kelly) leaves the show, without explanation, after its first season, thus where "Mandyville" got its name as the character was "sent to live there" without anyone else on the show noticing or caring. Of course, before Mandy was sent there her personal aide (and business partner) Daisy Reese (Merrin Dungey) had already ventured to Mandyville, having been hired along with Mandy to work at the White House after only showing up in one episode... and then disappearing entirely. They say, on a quiet night, you can still hear the faint voice of Daisy echoing through the halls of the building...

Unrelated to Mandy we also had Laurie (Lisa Edelstein), a high-priced call girl that Sam slept with (without knowing she was a call girl). They strike up a friendship and he sees her, as a friend, from time to time throughout the season. And then, for no reason that was ever explained, Laurie disappears, another resident of Mandyville.