When is Marvel Not Marvel

Fans of Marvel's deep-cut library probably know the name Big Hero 6. A superhero team inspired by Japanese culture, the title, received a couple of mini-series while the titular team also showed up for a few cameos in other titles. They weren't a huge smash hit team by any big measure but, for certain fans, the name "Big Hero 6" did mean something. Fans of the team certainly would have loved to see their favorite characters brought to the big screen. 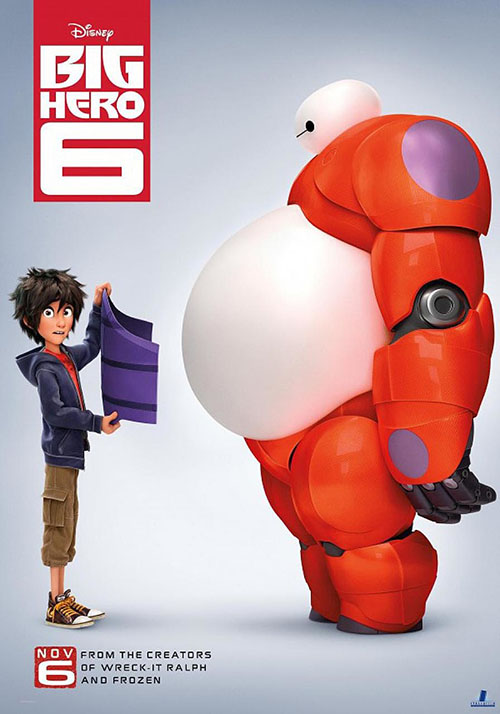 The film that came out in 2014 had to be a disappointment for those fans. That is not to say that 2014's Big Hero 6 film, the first animated movie to come out of Disney's purchase of Marvel, is somehow a bad movie. It's actually pretty good for what it is. It's a bright and funny animated movie perfectly in line with the other 3D Disney AnimationThe House of Mouse built on their classics, Disney Animation is considered among the premiere animation masterpieces ever since their first release, Snow White, all the way back in 1937. movie to come out during the era. As far as adapting the actual superhero team Big Hero 6, though, this movie deviates far off the mark. Some characters share the same name, and there's a vague Japanese-fusion feel to the world, but this movie really isn't an adaptation of the source material, not by a long shot.

It's pretty clear that Disney really just wanted to make an animated film that could tap into the big superhero energy that was going on in the early 2010s. Superheroes were (and currently still are) big business, and anything that had superheroes in it could make big money. Disney taking a property that was unlikely to be adapted elsewhere and turning it into a kid-friendly animated feature makes a certain amount of business sense. Marvel fans that knew the characters probably weren't happy but, really, how many out there really cared about the original Big Hero 6? About as many as are devout fans of Hawkman, I'm sure. Overall maybe it would have been better to make an original team without the connections to any source material, as this film really isn't related in any way that matters, but that's not the film we got.

Instead we have the adventures of 14-year-old Hiro Hamada (voiced by Ryan Potter), boy genius robot inventor with a penchant for getting into trouble. Hiro would hit the bot-fighting circuit (an underground sport that was also illegal), and sometimes would get snatched up by the police while getting chased by gangsters. His brother, Tadashi (voiced by Daniel Henney), decides to set the kid straight by taking Hiro to his "nerd school", San Fransokyo Tech. There Hiro meets all of Tadashi's friends -- Jamie Chung as Go Go, Genesis Rodriguez as Honey Lemon, Damon Wayans Jr. as Wasabi, T.J. Miller as Fred -- and realizes just how cool nerd school is.

Unfortunately, after coming up with a super cool invention that get Hiro admission to the nerd university (he creates microbots, tiny bots that work together as a collective whole), there's a hideous fire that kills Tadashi (because it's not a Disney film without family murder). Hiro is sullen and withdrawn until Tadashi's medical robot, Baymax (voiced by Scott Adsit), comes to life. Suddenly Hiro realizes what he has to do: retrofit the medical assistance bot into a crime fighting powerhouse so they can find who set the fire, what their plan is, and how they can stop whatever is going on, once and for all. 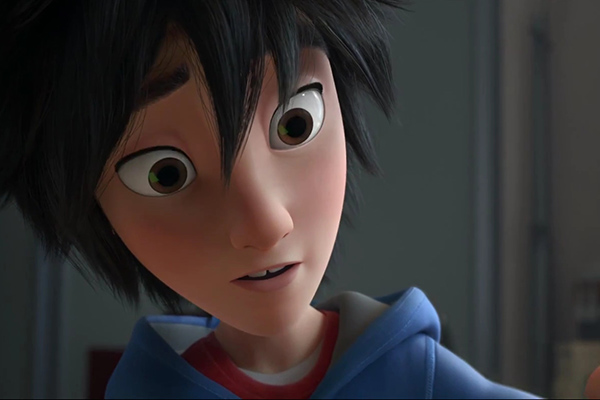 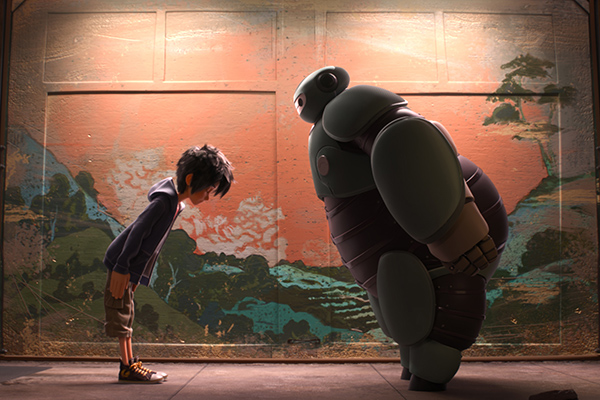 Fans of the original comics will recognize some of the character names -- Hiro, Baymax, Honey Lemon, Go Go, Wasabi, Fred -- but that's about as much connection to the original source material as you'll get here. This isn't a super-powered team of mutants (because mutants were tied up at another studio); instead we have tech whiz inventors making gadgets to help them fight crime. Their powers are different, their motivations are different, and they basically don't resemble anything from the comics at all.

It's a bit of fire Disney played with, frankly, because in tossing out all the original source material (which, really, wouldn't have fit a kid friendly story about a boy genius inventor and his crime-fighting, cuddly robot) that also forced the writers to come up with new stories for everyone. In the case of Hiro and Baymax, who serve as the central focus of the story, we get a decent enough setup that we care about their adventures. Everyone else, though, is little more than a name and a voice; who Honey Lemon, Go Go, or Wasabi are as people is left to performance alone as the actual story doesn't really care at all.

That's actually a big issue the film has: it's so centrally focused on Hiro and Baymax that it hardly invests time in anyone, hero, villain, or otherwise. If this were a movie called Baymax! then maybe the emphasis on just our central duo would work. You don't bitch about Batman failing to spend time on the passionate hobbies of Alfred (although Alfred is a bad ass and I won't countenance anyone saying otherwise). But this is ostensibly a team superhero film and the team never really comes into focus. That seems like an issue.

I do enjoy the tale of Hiro going from alley-rat robot fighter to superhero. It's a good arc... but the film doesn't really spend quite enough time on the superhero part to make it work, either. The team doesn't come together until effectively the last act of the 90-minute film, and then we only really get two sequences of them being heroes: a penultimate fight against the villain and then the big climax. I wanted to spend time with the heroes as they learned to be heroes, as they found a way to come together as a team to fight adversity, but the film never gives us that. This is a superhero story in only the most cursory sense of the term. It fails a bit more than it needed to when it comes to its story, start to finish. 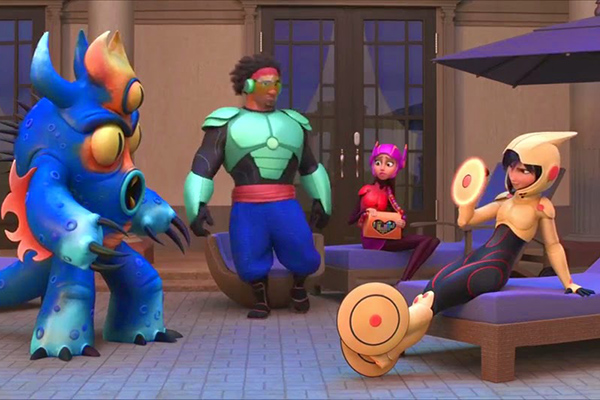 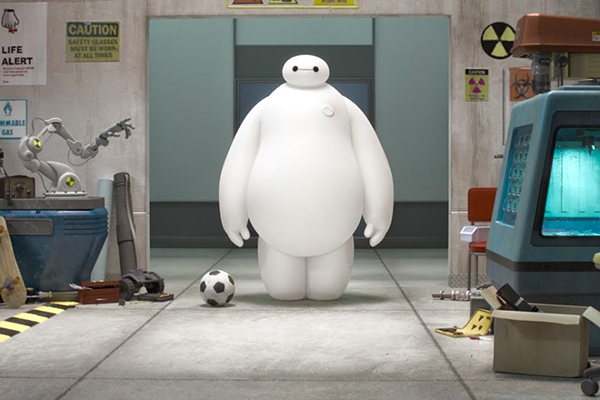 Where the film does work is as an amusing comedy of errors about a boy and his bot. Some of that is down the amusing writing for the central duo, but mostly isn't because Baymax is adorable in all senses of the term. His design is great, a big, cuddly robot clearly designed to sell inflatable toys and plushies. He's also voices really well by Scott Adsit, the actor giving Baymax a warmth and humor that was probably only implied on the page. Baymax works because of Adsit, and because Baymax works the film manages to come together just well enough to be watchable.

Big Hero 6 isn't my favorite film of the Disney 3D animation era as the Disney PrincessesReleased in 1937, Disney's Snow White was a gamble for the company: the first fully-animated, feature-length film ever created. It's success lead to the eventual creation of the Disney Princess franchise, which has spawned 13 main-line films and multiple spin-off movies and shows. films from here, along with several other great tales (Wreck-It Ralph, Zootopia) absolutely crush it. It's fun, and warm, and silly, and that works to its favor. But as far as being a good superhero film that really has a handle on its characters or its story, this animated feature fails to hit its marks.