I am not someone that would traditionally be described as a "Disney fan". I think there is artistry to the various movies they've made over the last 80-plus years, but most of their films haven't really hooked me. I grew up during the "Disney Renaissance", but most of those films were from the Disney PrincessesReleased in 1937, Disney's Snow White was a gamble for the company: the first fully-animated, feature-length film ever created. It's success lead to the eventual creation of the Disney Princess franchise, which has spawned 13 main-line films and multiple spin-off movies and shows. line and, frankly, had far too much singing for my tastes (give me romance all you want but singing is right out). I was a big fan of The Lion King back in the day, but if I had to pick a film from that movie I really enjoyed now I'd probably lean towards Aladdin because Robin Williams was a timeless genius. 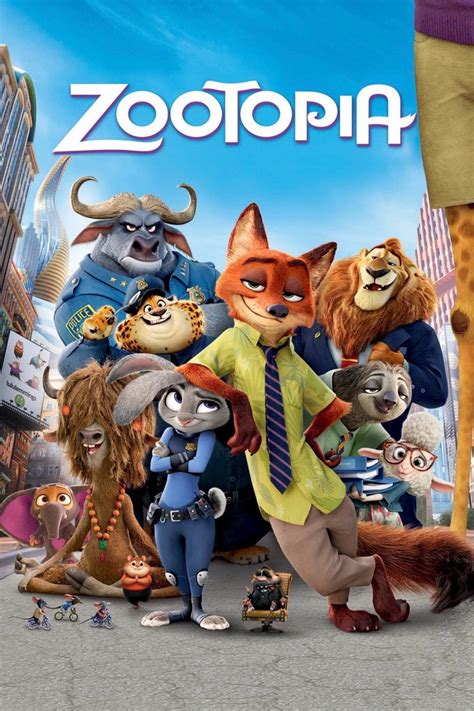 With that being said, I have enjoyed the more recent wave of solid, 3D-animated films, which I like to think of as the "New Disney Renaissance". Started in earnest with Tangled, which is just a great inversion of the Rapunzel story, Disney has seen a lot of solid hits which even I can admit were pretty good. With that said, I was surprised how much I enjoyed Zootopia the first time I saw it. I certainly wasn't itching to go watch the new (at the time) Disney film in theaters but once I was there I found it to be a pretty darn enjoyable movie.

I was reminded of this when my wife elected to pop the film on more recently while we were browsing around in Disney+Disney's answer in the streaming service game, Disney+ features the studio's (nearly) full back catalog, plus new movies and shows from the likes of the MCU and Star Wars.. The benefit of that streaming service is you have a ton of pretty solid films from the Disney catalog right there, and if I had to choose a film to watch from the recent era, it's hard to go wrong with this tale of talking animals solving nefarious crimes. Going back and watching it again, honestly, I noticed that for a Disney film Zootopia is pretty mature. It's not, like, R-rated mature (although I would be intrigued to know what that film would have looked like), but it does have writing and themes that likely would go right over the head of the 5-year-olds in the audience.

The movie focuses on Judy Hopps (Ginnifer Goodwin), a rabbit with dreams of being the first cop of her kind in Zootopia. For those that don't know, Zootopia is the big metropolis at the center of the animal world. it used to be that predators fed on the prey animals and the world was a violent place. The animals evolved though and now all live in harmony, not eating each other or being afraid of being eaten, such that even a small rabbit could potentially be a police officer in the grand metropolis.

Judy does the work and proves herself and, in fact, does become the first rabbit cop in Zootopia. However her commanding officer, Chief Bogo (Idris Elba), doesn't think a rabbit can be a good cop so he puts her on traffic duty all while all the rest of the officers (rhinos and elephants and other big mammals) deal with the case of 14 missing citizens. While doing her best on traffic duty Judy runs across Nick Wilde (Jason Bateman), a fox and small-time crook. Wilde, as Judy soon realizes, might just be a key witness to the disappearance of one of the missing citizens, so she managed to con the conman into helping her, and that sets the two of them on a case of intrigue and mystery on the mean streets of Zootopia. 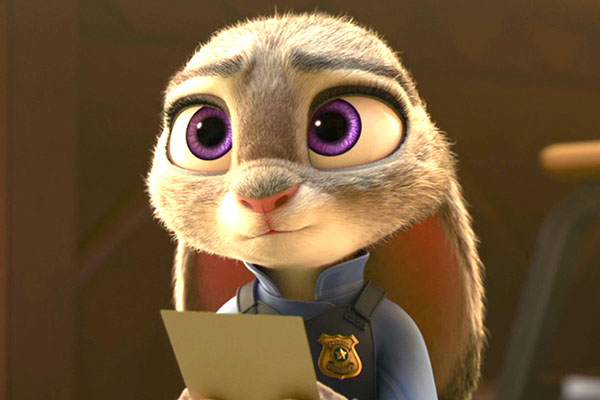 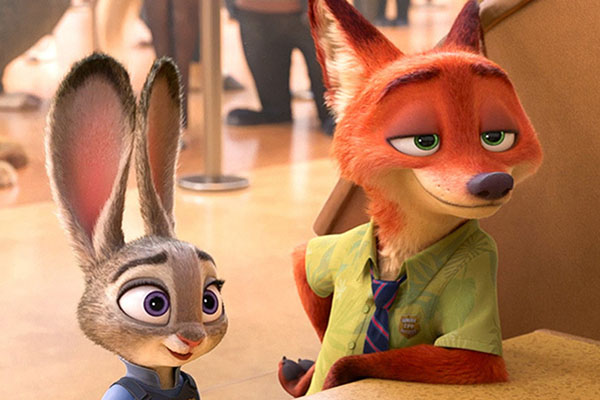 In construction, Zootopia is a pretty simple film. You can see themes that fit a number of styles: crime film, mobster movie, murder mystery, and the like. Because of it's crime-style plotting, you quickly realize there are only so many potential villains at play, only so many ways the story could play out. If you're keen of mind, and willing to think about the mystery as it plays out (and not just let the film wash over you) then I'm sure the simple mystery could be solved long before it's actually revealed. Sure, some key clues are hidden but a "why" and "by whom" would be easy enough to guess before the third act of the film even starts up.

With that being said, the joy of the movie comes much more from the experience than the case. The film gets a lot of mileage out of the concept of "Zootopia", the idea that all these animals, of all these sizes, live and work together in harmony. The are gags-a-plenty to be had from big animals doing human things next to small animals doing human things, all mixed up together. By the time you get to Mr. Big, a tiny shrew who's also the biggest mob boss in the city, you realize that this film has a solid anything for a joke mentality that really does work.

Aiding that is the chemistry between the two leads. Goodwin is great as the earnest to a fault Judy. She puts real passion and heart into the voice performance, making Judy into someone you want to root for. Bateman certainly doesn't stretch himself playing Nick, giving another solid, dry performance after spending five seasons doing the same over on Arrested Development. Of course he's so good at it that he delivers this performance with aplomb. And the two leads together are aces, working well off each other to create a mismatched buddy cop team you want to see more of.

Beyond that, though, the film has material that really seems aimed at the adults in the audience. Judy is a rabbit that wants to be a cop, making her, in essence, a "badge bunny" (a derogatory term, for those that don't know, for women that like to date cops). She then gets into the force and experiences institutional discrimination because of who she is. Sure her gender is never pointed out (and even the term "badge bunny" never comes up directly) but you can feel how the film is hinting around at that along with themes of racism and other discrimination as well. 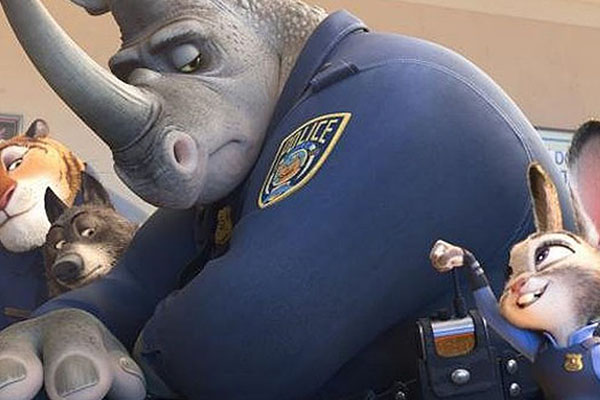 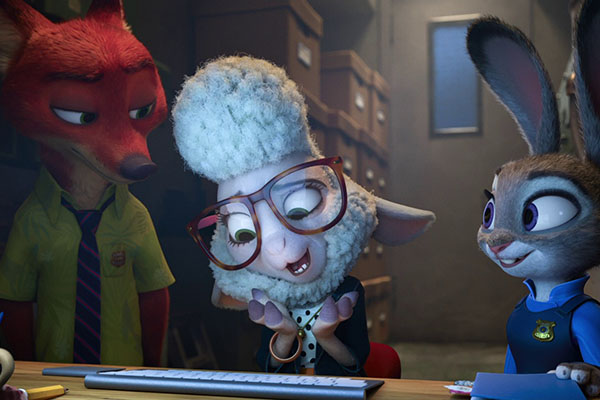 Nick also allows the film to play with themes of racism, he being a predator of the classically shifty variety. Here we get questions of can a person be more than they were born to be or are they destined to be a lower caste than everyone else. Judy doesn't run into that nearly as much as while she's viewed as a small prey animal she's never considered to be untrustworthy. Even Judy has issues getting over her preconceived notions about predators and prey, something she has to work through (and does) by the film's end.

Plus, as far as adult material in the film, there are jokes the the kids wouldn't get (and their parents would want them to). Judy and Nick visiting a naturist park where citizens of Zootopia can be free and naked (although naturally no dangling bits are shown) seems pretty risque for a Disney film (I would love to hear the parents having to explain "naturalism" to their kids after watching this film). There's also a late-movie reference to Breaking bad that absolutely had to have given Standards and Practices fits to approve. It shows a side of Disney I wouldn't have expected, especially from a film that eventually went on to make over a billion dollars.

Of course, that's why the film works so well: it treats this material with more nuance and maturity than you'd normally expect from a silly Disney AnimationThe House of Mouse built on their classics, Disney Animation is considered among the premiere animation masterpieces ever since their first release, Snow White, all the way back in 1937. film. It might have talking animals but it's also a cut above for Disney's animated efforts, turning this silly little cop film into a real classic of the Disney form.