Got a Train to Catch

As I'm not a huge fan of Westerns I can't really speak on how popular some of the classic titles are over others. Where I can debate the relative merits of the DC Extended UniverseStarted as DC Comics' answer to the MCU, the early films in the franchise stumbled out of the gates, often mired in grim-dark storytelling and the rushed need to get this franchise started. Eventually, though, the films began to even out, becoming better as they went along. Still, this franchise has a long way to go before it's true completion for Marvel's universe. and the Marvel Cinematic UniverseWhen it first began in 2008 with a little film called Iron Man no one suspected the empire that would follow. Superhero movies in the past, especially those not featuring either Batman or Superman, were usually terrible. And yet, Iron Man would lead to a long series of successful films, launching the most successful cinema brand in history: the Marvel Cinematic Universe., having my finger on the pulse of nerdy discussions Online, my knowledge of the Western genre is severely limited. Thus I can't say for certain if fans of the genre would know that a previous version of 3:10 to Yuma existed, hailing from 1957. All I know is that most people that saw the 2007 version probably didn't know any prior edition existed. 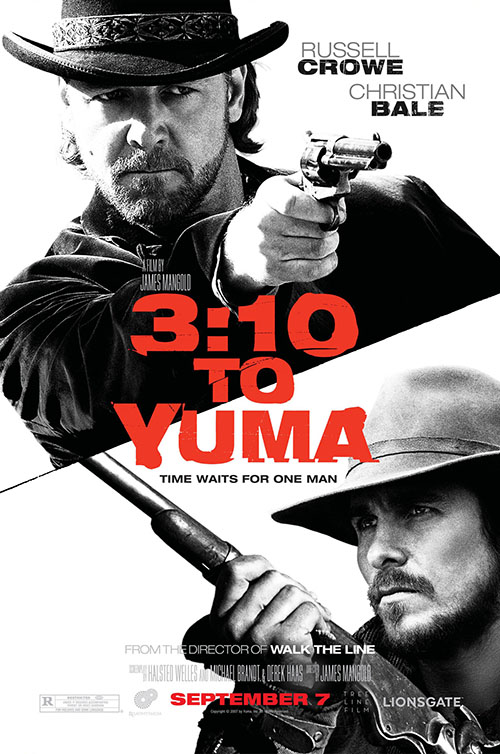 While I don't think the 1957 version really holds up in the modern era (it's very much a film of its time, slow and bloodless) it was worth looking back at that version of the story before coming into the 2007 version, if only to see all the ways he two films mirrored each other. Where a lot of remakes will take the concept of a film but drive off in a different direction, the 2007 film is quite beholden to the 1957 movie (and, I would assume, the Elmore Leonard short story that came before all that). The setup is more or less the same (with a farmer in need of water, and money, to keep his herd of cattle alive, given the opportunity to earn the cash he needs by taking a wanted criminal in for justice), and it even uses many of the same lines and dialogue beats. There's more added to the story (not all of it necessary, mind you) but you could roll the two films on top of each other and see all the ways they are parallel.

Despite that, I do think in a few ways the 2007 film is more watchable. I wouldn't say it's a better film, bear in mind, largely because many of its additions feel so unnecessary. But as far as taking the story of Three-Ten to Yuma and turning it into a watchable piece of popcorn, the 2007 remake does a respectable job. Audiences didn't seem overly thrilled by the film when it was out, helping the movie limp to a $71 Mil return on its $55 Mil budget, but that is likely due more to the fact that no one cares about Westerns anymore (at least, not in the general public). What once was a major genre in Hollywood has fallen out of favor over the years and even a decent popcorn feature like this couldn't resurrect the format.

In the movie rancher Dan Evans (Christian Bale) finds himself in a tight spot after the loan on his farm comes due. The lender (read: loan shark), Glen Hollander (Lennie Loftin), wants Dan off his land, seeing that the land will be more valuable once the railroad moves through, and Dan and his family farm is only in the way. So Hollander has his men burn down Dan's farm, putting pressure on Dan and his family -- wife Alice (Gretchen Mol), older son Will (Logan Lerman), and younger son Mark (Ben Petry) -- to move, ASAP.

Salvation (in a sense) comes in the form of Ben Wade (Russell Crowe, once again summoned to appear in a period piece), a wanted outlaw. After killing a stagecoach drive so he and his men can make off with the railroad's payroll, railroad agent Grayson Butterfield (Dallas Roberts), enlists a posse of men to take the wanted Wade to catch the 3:10 to Yuma. Dan joins on the promise of two hundred dollars, knowing full well this could be a dangerous run. Wade's men are out in the field, just waiting to kill everyone on the posse and free their leader. It's a mad dash to the train to turn the outlaw over and not everyone is going to make it back alive. 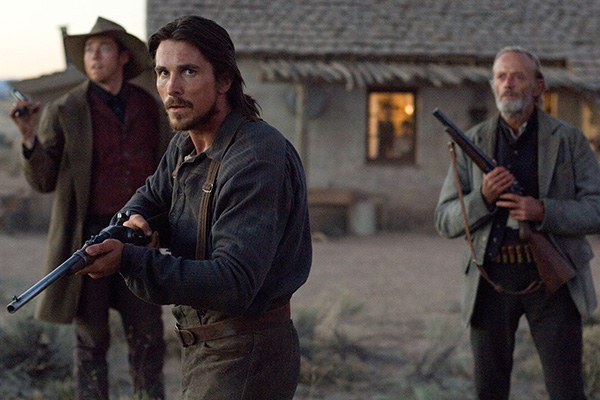 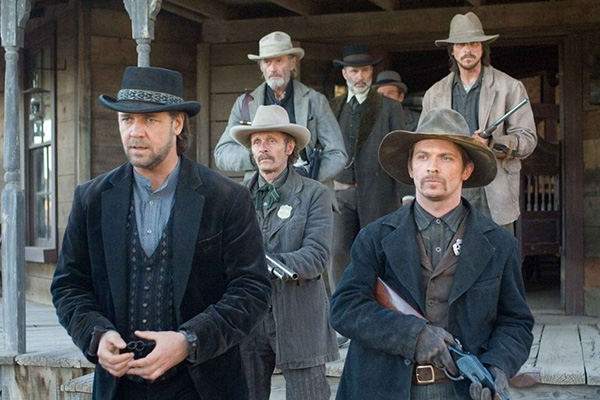 Going into the 2007 3:10 to Yuma after watching the 1957 version is certainly a weird experience. The films use a lot of the same dialogue, in the same context and similar scenes. It leaves this newer version feeling like a much more direct remake but, in ways, also an unnecessary one. The film doesn't really change most of the beats of the story, going through all the same motions to end up at (nearly) the same place by the end of it all. If you have seen the older version you might come out of this new one saying, "well it was prettier, and it had a bigger budget, but what did it really add to the story?" The answer is: not much.

That's not to say the film adds nothing as it does put in a few things. There are a couple of added action scenes, clearly put in to give the script the Hollywood standard "action beat every 10 minutes". There's a sequence put in where Wade is captured by random railroad guys and Dan and the remnants of the crew (who have already been thinned by Natives and some of Wade's own men) have to rescue Wad so he can face real justice (not vigilantes). And here are some new characters, like Alan Tudyk's Doc Potter, who are largely wasted on empty roles that add nothing to the story. This all adds up to make 3:10 to Yuma '07 longer but not really better.

Where the film shines is in its cast, specifically Bale and Crowe. Of the two I think Bale does a better job here, getting the meaty role of the downtrodden rancher. Bale is really able to let the angst and worry play out, selling the fact that this probable suicide mission is his last resort. Crowe, by contrast, has an absolute ball as Wade, getting to play all the dialogue around in his mouth, enjoying playing the bad guy heavy. He's not really believable as the bad guy (something about him doesn't feel slimy enough) but he certainly adds a sense of fun and adventure to the story.

The action also plays better here due to the relaxed rules of our modern era. The film has an R rating which allowed it to show more shooting, more death, and more violence than the original movie could. The 1957 film felt quite hobbled (as I noted, "bloodless") due to the restrictions of the Hayes Code, but the 2007 edition can revel in the gunfights, letting the play out properly without fear of offending sensibilities. This is really where the movie does its best work as, this time around, we actually feel the danger Dan is in every step of his adventure. 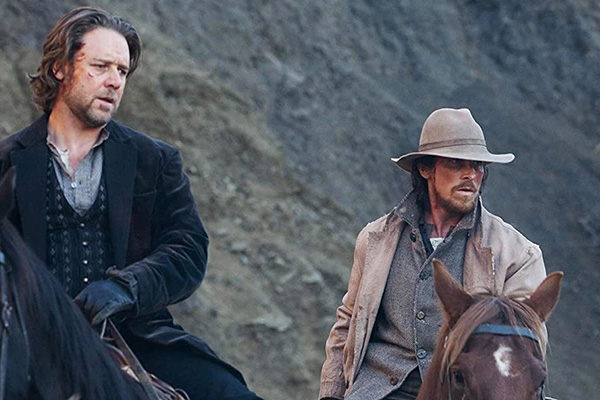 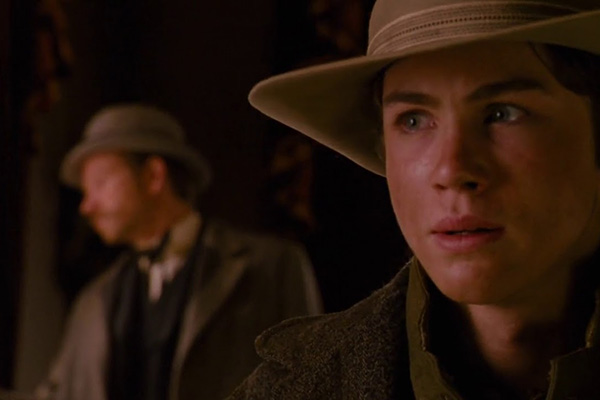 I think this remake could have benefited greatly by trimming down its story, and added beats, to match the lean plotting of the 1957 movie. A shorter film, with all the good things this movie does, could have worked really well. While 2007's 3:10 to Yuma never feels leaden it does drag on in places, meandering and wandering unnecessarily. That makes this a remake that doesn't really feel essential even if, in the moment, it is quit watchable. Neither film is perfect by any stretch but if I'm going to go back and watch this story again I'm going to lean towards the 2007 edition. It's not perfect but it does have enough action to make it fun to watch.