A Whole Lot of Tongue

Venom: Let There Be Carnage

Look, I don't think anyone is going to argue that 2018's Venom was a piece of superhero high art. Sony's first attempt at building a film around a popular SpidermanSure, DC Comics has Batman, Superman, and Wonder Woman, but among the most popular superheroes stands a guy from Marvel Comics, a younger hero dressed in red and blue who shoots webs and sticks to walls. Introduced in the 1960s, Spider-Man has been a constant presence in comics and more, featured in movies regularly since his big screen debut in 2002. character without, you know, actually being allowed to have Spider-man in the first, the first Venom was remarkably watchable despite that limitation. It wasn't good but it was stupidly enjoyable. Craptastic, in the best possible sense, making a film that you could partake upon so long as you shut your brain off. 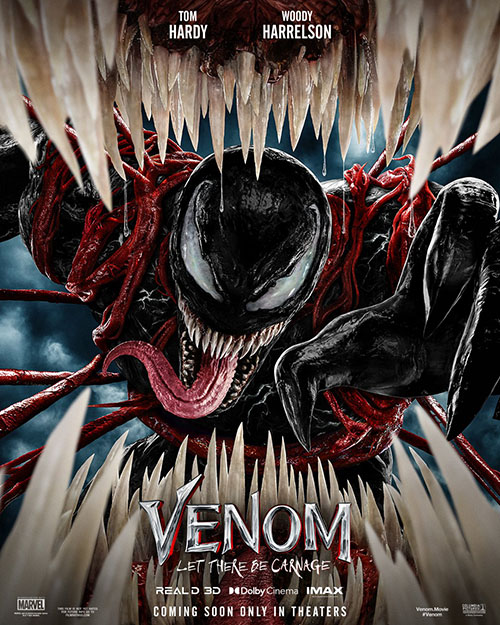 And, hey, to Sony's credit, Venom was successful, illustrating you could make a "Spider-man without Spider-man" movie and people would turn up. They certainly did turn up, to the tune of $856 Mil, letting Sony know they had to make more of these films. Movies for Morbius, Kraven the Hunter, the Sinister Six, and more were put into production along with, of course, a second Venom. And, naturally, if you were going to do another Venom then you had to bring in his most famous foe (that wasn't Spider-man): Carnage. Thus 2021's Venom: Let There Be Carnage.

I do understand the impulse to pit Venom up against Carnage. Venom only has so many villains everyone knows, and Carnage is certainly the biggest of those guys (I can count the number of Venom foes I know on... uh, one finger, actually). Sony wants to put the biggest, most popular characters in their films (thus why Venom was shoved into Spider-man 3, so they just had to have Carnage here. There are problems with this, and among those are the fact that the last film just had a symbiote as the bad guy, along with the fact that Carnage is too big a character to easily get summarized in a single film. By trying to immediately pivot to Venom's biggest foe the film undercuts everything that could have made a story like this great. Plus, well, it's a sequel to Venom. Expecting this to be good was a silly idea.

In the film we pick up with Eddie Brock (Tom Hardy), fresh off his win against Riot, not that he can talk about it. The FBI wants Venom for the various crimes committed in the first film (like beating the snot out of a lot of police officers) so Eddie and Venom had to lay low, a proposition that Venom (also Tom Hardy) finds none too palatable. Venom wants to hunt bad guys and eat their heads (he needs the juices in brains to stay alive, and chocolate, which also has that enzyme, is a poor substitute), while Eddie doesn't want that kind of heat.

When Eddie is called in to interview mass murderer Cletus Kasady (Woody Harrelson), it seems like just the thing to get his reporting career back on track (after it was trashed in the previous film). Things go awry, though, when Kasady bites Brock on the hand, though. Just a little bit of Venom's goo transfers over and, suddenly, there's another symbiote running around. Meanwhile, Eddie and Venom have a falling out (not realizing there's a new symbiote gestating), with each half going their separate ways. Cletus, meanwhile, uses the newly bonded Carnage to escape his execution so he can go on a rampage, killing people, stealing cars, and breaking his own lover, Shriek (Naomie Harris), out of prison. Eddie has to find a way to make nice with Venom so the two can work together to take on a new, and very serious, threat. 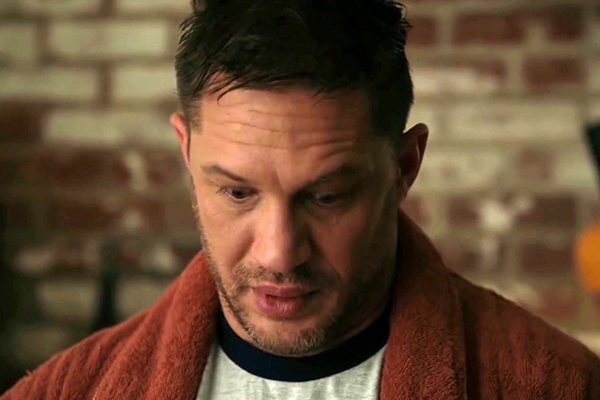 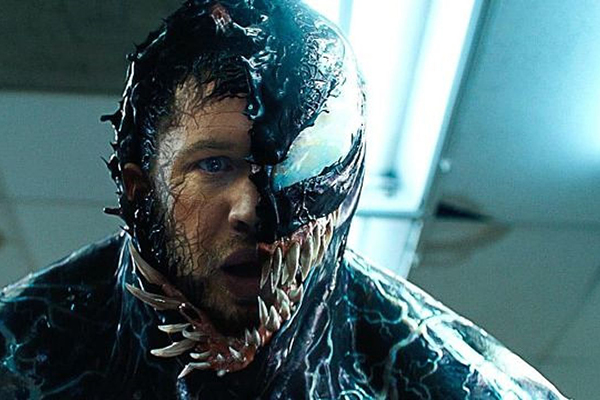 There's a lot that doesn't work in this sequel (as I noted above), but let's start with what does work: Tom Hardy. His performance as hapless loser Eddie Brock, as well as the voice work he does as Venom, is just as good here as it was in the first film. The two characters are basically in a toxic bromance, feeding on each other (symbiotically, in more ways than one), and the banter between them is absolutely hilarious. Hardy's characters are what give this film life as their Odd Couple pairing adds energy and fun to the whole film. The movie is at its best when its just Eddie and Venom bitching at each other for comedic effect.

Now, on to what doesn't work in the movie which is, effectively, everything else. Number one on that list is absolutely Carnage. For starters, Woody Harrelson is absolutely miscast as Kasady / Carnage. He doesn't have the right energy to play the mass murderer (and yes, I know he played a spree killer in Natural Born Killers); his performance is all over the place, campy and twitchy but never, not once, actually scary or interesting. It doesn't help that the actor, at 60, was cast to play a man half that age. He look too old to play the character on the page it it throws off the whole vibe of the film.

Worse, Carnage is an absolute non-entity in this film. Much is made of Kasady's character so that we are supposed to see him as a threat (although his actions after the fact call all that into questions, acting less like a composed killer than a petulant child), but Carnage barely even gets that characterization at all. We don't understand what Carnage wants, why he chose Kasady, why he didn't just bounce to a new host, or anything. Carnage is basically just "red symbiote attached to stupid killer" and that's as far as the film takes it, full stop.

The film absolutely doesn't understand what to do with Carnage. It uses the new symbiote to go through the motions of the previous film (and certain scenes from Spider-man 3) without actually adding anything new. Exiting the film, what did we gain from having Carnage in the film that we didn't get from Riot before, or any other symbiote they could have added. He's red, yes, but he does all the same things Riot did in the previous movie. All he does is serve as a reminder that Venom is a runt in comparison to the other alien symbiotes (even, apparently, one that he gestates himself) an... well... that's about it. 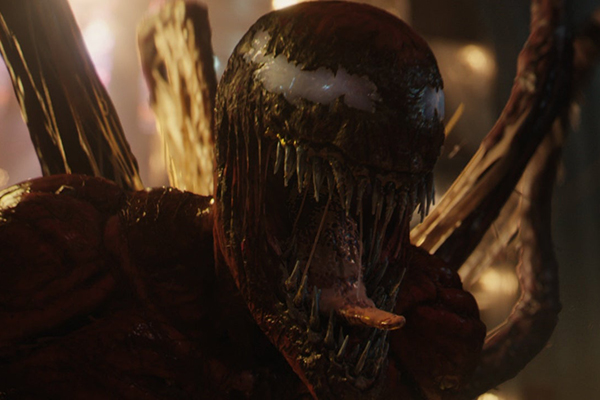 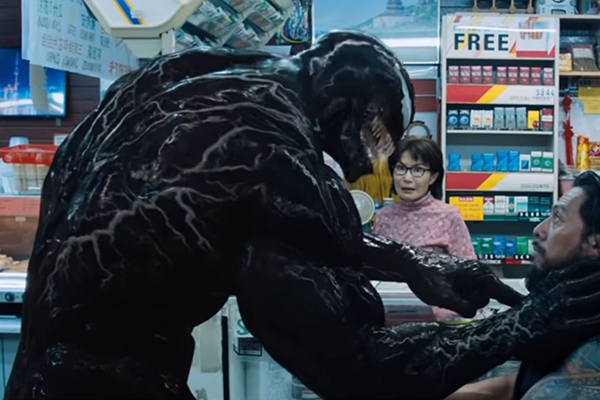 Honestly, I feel even worse for the Shriek character. In the comics she eventually gets a symbiote and becomes this cool, screaming version of an alien, a mutant enhanced with the alien goo to be something even more powerful. Here she's little more than a prize that Kasady has to retrieve, and then she creates sound waves that annoy Carnage. She doesn't even really get a chance to shine in the movie, and then she dies at the end (spoilers, I know) so the chance of her getting a symbiote after are pretty much non-existent.

Death is a big problem in this film (and even more spoilers incoming) as this movie feels the need to kill all its villains. By the end Shriek is dead, Kasady is dead, and Venom devours the red symbiote, killing it effectively as well. Carnage is a big character in the comics, serving as a regular foil for Venom, yet this film barely uses the red monster at all before it's wiped off the play field, never to be seen again (we presume). It's a very short-sighted and stupid way to use the character, but then when has Sony ever really done anything smart with the Spider-verse characters (outside of the excellent animated Spider-man: Into the Spider-Verse).

Watching this Venom sequel, the big question I had was "why?" What was the point of all this. The movie is dumb and loud and barely does anything with anyone at all. While the first Venom was a big, dumb time it was at least enjoyable. This sequel is turgid, feeling like an over-long mess despite clocking in barely over an hour-and-a-half. It wastes all its opportunities, squanders cool characters, and then limps across the finish line in standard superhero fashion (big CGI climax, villain dies, credits roll).

While Venom wasn't a great movie it still could have had a better sequel than the stupid and futile Let There Be Carnage. Everyone and everything deserved better than this superhero sequel. Sadly it made $500 Mil in COVID times so we're likely to see many more awful sequels to this bland and boring series.