I don't think we need to sugarcoat just how bad 2007's Ghost Rider really was. It was a bad film, a tragic miscalculation right before Marvel was poised to launch their biggest franchise yet, the Marvel Cinematic UniverseWhen it first began in 2008 with a little film called Iron Man no one suspected the empire that would follow. Superhero movies in the past, especially those not featuring either Batman or Superman, were usually terrible. And yet, Iron Man would lead to a long series of successful films, launching the most successful cinema brand in history: the Marvel Cinematic Universe.. If that film had come out two years later it's easy to think that Marvel would have taken a firmer hand with the production and crafted it into something that matched their growing house style. But maybe not and if could have been a failure on the order of The Incredible Hulk. 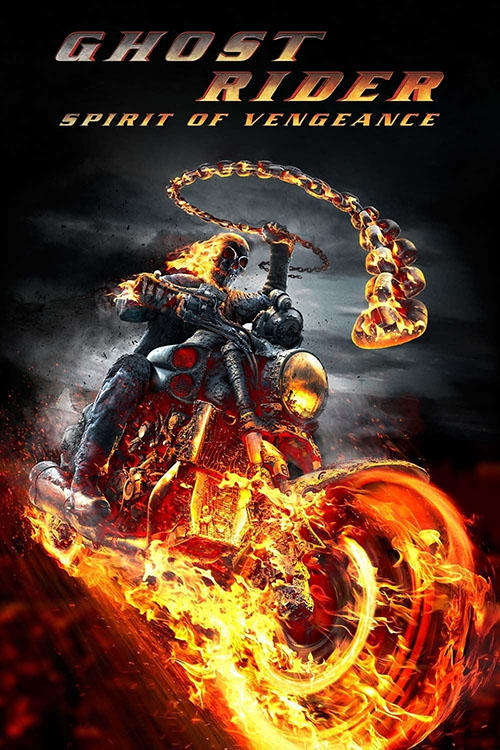 Regardless, I think a lot of comic book fans dismissed the Ghost Rider sequel, Spirit of Vengeance, because of the foul stink hanging over the original film. It was hard to imagine at the time that the second film could be any better considering (a) where it came from and (b) that the film didn't tie into the MCU. The Ghost Rider wasn't SpidermanSure, DC Comics has Batman, Superman, and Wonder Woman, but among the most popular superheroes stands a guy from Marvel Comics, a younger hero dressed in red and blue who shoots webs and sticks to walls. Introduced in the 1960s, Spider-Man has been a constant presence in comics and more, featured in movies regularly since his big screen debut in 2002. and an off-brand Marvel production was never going to get the hype that films in the growing MCU could achieve. This film was doomed to failure.

I don't want to make it sound like this film was some kind of hidden gem, mind you. It's not a great film by any measure, but it does somehow manage to course correct a number of flaws in the 2007 film: better acting (and better actors), a more logical story, better CGI and more use of practical effects. It's still a bad movie but considering how bad the first film was, it's much improved by comparison. Which, I guess when all you have to look at is the original Ghost Rider, that kind of makes this film good?

The movie finds Johnny Blaze (a returning Nicholas Cage) hiding out in Easter Europe, fighting to keep the demon living inside him, the Ghost Rider, under control. He's called upon by Moreau (a very much slumming it Idris Elba), an agent for a religious sect that wants to stop the rise of the Devil. Johnny, of course, gained his powers from a deal with the Devil that he made years and years ago, but he wasn't the only one to sign such a deal: a young mother, Nadya (Violante Piacido) struck another deal with Mephistopheles (now played by Ciaran Hinds) when she was dying. he saved her but, in the process, she made him bear her child. Now, over a decade later, Nadya and her boy, Danny (Fergus Riordan) are on the run trying to escape the Devil's goons who want to collect Danny and bring him back to his father.

Moreau wants to keep Danny out of the Devil's hands because, as per a prophecy, the Devil will shed his dying form and take up residence inside the boy, becoming even more powerful in the process, Johnny joins the fight under the promise that, should he get the boy and bring him to the religious sect, they'll remove the demon and Johnny can be a normal guy once more. But you have to be careful what you wish for as removing the demon could leave Johnny vulnerable, and with the Devil's men around every corner being mortal isn't all its cracked up to be. 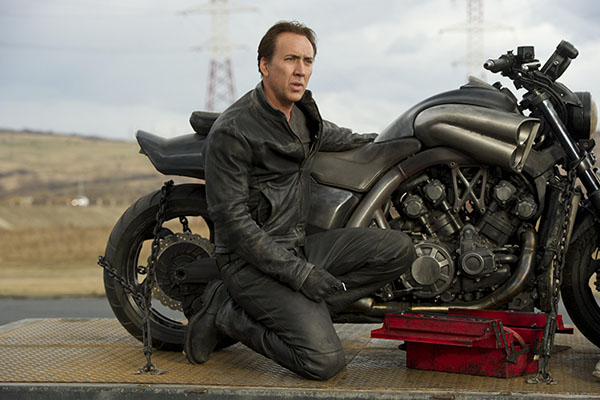 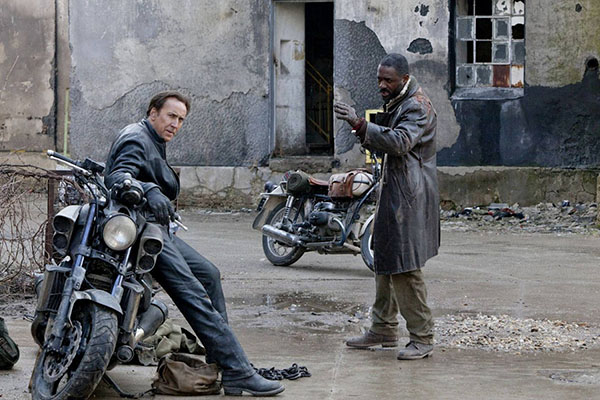 I fell like it's important to note that while this is a sequel in name it does the writers and director on the film ignored a lot of what happened in the original film. Johnny's deal with the devil was signed different, he's no longer addicted to candy, he has less control over the demon inside, and even his powers seem to work at least somewhat differently. While Nick Cage is still here, acting as our central focus, the two films fell pretty unrelated to each other in just about every meaningful way you could think of otherwise.

I don't think that's a bad thing, though, as there really wasn't anything worth keeping from the original film. The change of venue, from America to Eastern Europe, the new cast of characters, and the improved CGI all go a long way to clearing the stink of the 2007 original and, with this film retelling Johnny's origins for anyone new coming into the film, you could basically ignore the original film entirely and not miss anything. That's a wise choice, really, considering this is a much improved film that shouldn't be shackled with the crap that came before.

The film isn't deep by any measure. It has a basic "fetch quest" plot -- go here, collect a kid, then bring him here -- with the usual expected twists and turns you get in just about any superhero sequel. Considering Johnny wants to be rid of the demon inside him you could almost call this film "Ghost Rider No More" (for all you Spider-man fans out there) and you'd know all the beats of the film (including the choice Johnny has to make by movie's end). It's not original at all, and by 2011 it probably did feel especially warmed over with all the other superhero films that were coming out since 1998 (when Blade essentially kicked off the modern superhero era).

That said, a film that follows the familiar beats of the genre doesn't have to be bad, and there is a lot to like in this film. Well, maybe not a lot; more like a few things that made it tolerable. For starters this Nicolas Cage who turns in a properly goofy Nicky Cage performance. Where I thought he was a little checked out, a little above it all in the first film he's absolutely invested here, giving a wild-eyed, balls-out-crazy performance. He certainly makes this film enjoyable to watch, but what I liked even more was the dynamic between him and the more grounded (but still a little goofy) performance from Elba's Moreau. Idris Elba is, really, too good for this film, but at least he gave the film his full attention. 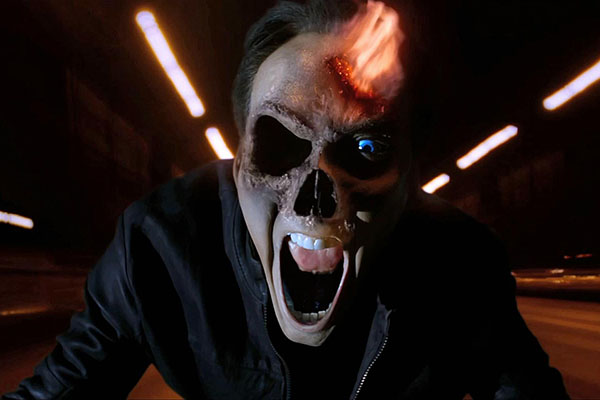 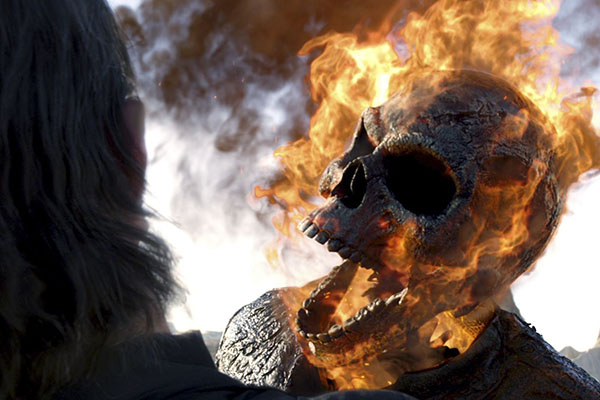 As noted, the CGI is also better this time around. The Ghost Rider actually feels like he was designed by technical experts and not just cranked out with a filter in iMovie. There's texture and a tactile quality to the Spirit of Vengeance this time around that makes the action much more believable. It helps that the team behind this film was willing to have fun with the character, using more of his powers and putting them (especially his ability to transform any vehicle he drives into his flaming rig) to good use.

There's also plenty of practical effects on display. Although the film still liberally uses CGI much more is done with makeup and wire work. This stands in strong contrast to the awful CGI of every single fight in the first film. This film understands action and actually has a few decent set-pieces. Nothing here rivals anything Marvel was doing at the time but it's still much more watchable than the 2007 Ghost Rider.

As I said, this film isn't good, but it's also not really that bad. It's a perfectly mediocre film that still somehow manages to be better than you'd expect. But then, the 2007 film set the bar so low that I guess any sequel could have stepped over it. Sadly for the character (although it's probably a good thing for the rest of us), Columbia elected not to pursue a third film for the character. This did reasonably well at the Box Office, pulling in $136 Mil off a $75 Mil budget, but superhero films were already expected to do more than that and the Ghost Rider just couldn't compete. Nicky Cage left the character behind and, within a few years the rights reverted to Marvel so they could put the Ghost Rider (a very version of the character) in Agents of SHIELD.

I'm not saying I wanted a third film in this series -- I actually rather liked the newer Ghost Rider that showed up on TV -- but this sequel showed some promise. With a better team behind the camera, and a bit more care, a third Nick Cage Ghost Rider could have maybe even been good, or at least a gloriously watchable train wreck. Instead the series (of two) at least goes out on something of a high note (for the series at least) with Spirit of Vengeance. That's probably a better ending than anyone could have expected.