The Restaurant at the End of the Universe

Douglas Adams's The Hitchhiker's Guide to the Galaxy is hailed as a true comedy classic, a novel that blends sci-fi and laughs into an irreverent whole. Certainly it has its many followers, and the whole media franchise, from radio shows to the novels and other projects along the way, are all beloved by fans. Most of them, anyone; going back and reading that first book, I was nonplussed. Something was missing and I just didn't find the book as funny now as I once did. 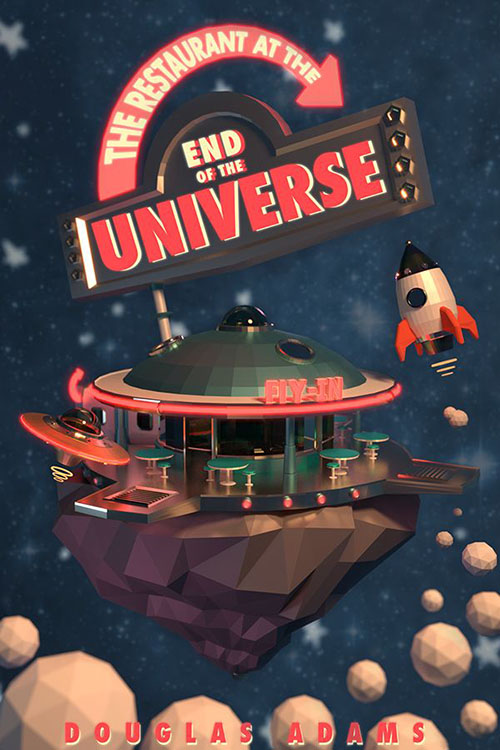 Although I explained in detail why I thought was wrong with that novel, for me at least, I did have high hopes for the stories that were to come after it. The episodic nature of the first book, that seemed to just spin itself out until it reached some kind of an ending without any real connective tissues between the adventure, would likely settle down once the author ran out of pre-written material he could steal from the radio shows. That end point is actually reached once we finish the sequel novel, The Restaurant at the End of the Universe, but even before we get to the end of this book things to take a turn for the better. This is a much improved effort, one I was able to enjoy a whole lot more for a whole host of reason we'll get into in a just a moment.

In the novel, having just escaped certain death on Magrathea (although the question to Life, the Universe, and Everything that is supposed to be answered by "42" is still unknown), the crew of Zaphod, Ford, Trillian, and Arthur all venture off for their next great quest: to find something to eat. That leads them to the Restaurant at the End of the Universe, a time-displaced eatery that sits right at the moment with the universe finally reaches is great, explosive death. This is great fun for the diners as they get to enjoy their high-priced dinner with a lovely show. But once the food is eaten and the drinks are drunk, things take a turn. The crew almost gets themselves killed when this steal the wrong ship, and then they are forced to teleport off into parts unknown, using an unguided transport system that could send them who knows where.

Zaphod and Trillian end up right back where Zaphod doesn't want to be: stuck on a quest to find the meaning of the universe. It seems there's a man at the center of it all, who controls everything, and this is the secret Zaphod him from himself and, now, he has to find the truth. What is the meaning of it all? What are the real answers? Maybe they'll find out and maybe the won't. Meanwhile, Arthur and Ford end up on an alien ship run by a bunch if idiots, destined for a crash landing on a back-water planet they'll never escape (assuming they even survive at all). And, of course, they're in for an unexpected, but inevitable, shock: that back-water planet is non other than Earth, all the way back in the Stone Age. Arthur finally gets to go home, but it's one he doesn't recognize at all. Who says the universe doesn't have a sense of humor?

As I noted above, I actually like this second novel a lot more than the first. There are multiple reasons for that but I think the first is that this novel hasn't seen nearly as many adaptations as the previous story. While both of these novels were based directly on the BBC radio series Adams also produced, the first novel saw a TV series, a movie, a rewritten set of episodes on vinyl, and even a video game, while the second was kind of stitched into the TV series, and even then only a bit. This material feels fresher simply by grace of the fact that I haven't seen it quite as often.

There is also the fact that while it's still feels episodic (not quite shaking that "radio show but rewritten" vibe) it has a tighter and more focused stories. Each adventure in the series, from an early romp for Zaphod, to the time at the restaurant, and then the split adventures for the two sides of the crew, each have a natural flow, cause and effect that makes if feel vastly more interesting. This novel lacks the kind of juttering storytelling, not lurching from one weird idea to the next without any rhyme or reason. I appreciated the storytelling a lot more here because of that flow.

There are also some set pieces here that still feel fresh and interesting despite how old this novel is. The restaurant, for starters, is a great idea, a delightfully weird concept that stands apart and unlike anything I've seen in sci-fi, before or since. And while, yes, eventually sending heroes back to the past of their own planet is a trope, I like how the novel does it, with a sly prod as the Earth is taking over by a ship of fools. The cave men weren't our ancestors; these idiots were.

That said, not everything about the novel totally thrilled me. The whole first act is dominated by Zaphod and, frankly, I don't like this character as much as Adams clearly did. He's shallow and stupid and while I get that's his character it doesn't make for a compelling lead. The novel gets much more interesting once all of the crew comes back together, and it finds a lot of energy at that point. While I like the ideas behind Zaphod's solo adventure, and I find the locales he visits interesting, Zaphod is a dud for me even still.

But then, in a way, I kind of feel like the book shorts all the characters just a little. Because these are adventures where everyone runs around a bit and then things happen that send them running in a new direction, the novel rarely even slows down for proper character development. We're told things about Ford, Zaphod, and Trillian but we never really get a good sense about them as people. Hell, Zaphod had his brain mangled so all we know is the character we have now, not the person he used to be. None of them seem to be evolving, not even our audience surrogate Arthur, and it does make for a cast of characters that are hard to relate too.

Still, for pure zippy joy, a strange tale that never really stops and always finds something new and weird to throw at the characters, I found The Restaurant at the End of the Universe to be just what I was looking for. It's still not perfect but it was a lot better than the first book (even if I'll get a lot of Online hate for saying that) and it gives me hope for where the series will go from here.