To Boldly Go In a General Direction, Cheaply

When it comes to all things nerd related there are few works as quintessential to nerd-dom as The Hitchhiker's Guide to the Galaxy. This series, with the books being more popular at this point than the BBC radio dramas that birthed it, are part of the pop-culture firmament, or, at least, they were when I was growing up. If you wanted to be nerd you needed to know this series (which was up to five books back then and now has a sixth book no one talks about). They were witty, they were charming, and they went to some really oddball places. 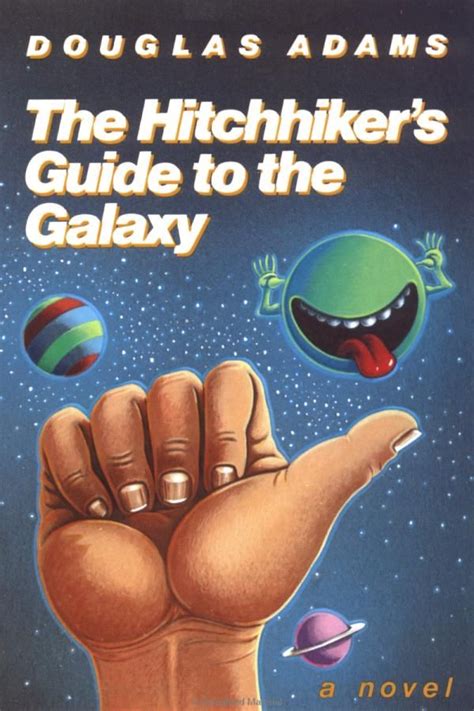 Of course, the origins of the series come from that radio series that was started a year earlier on the BBC. The birth of this series sounds a lot like the birth of another weirdo comedy series: Monty Python's Flying Circus, as both were guerrilla productions aired late at night, when the BBC assumed no one would be listening, before becoming massively popular because apparently Brits had nothing better to do late at night than listen to weird radio comedies. That original run, in heavily edited form, because not only this first book in the series but also a Vinyl recording (which was actually a re-edited and rerecorded version), a TV series, a movie, and then another TV series (among other versions). It was huge for a while, and every once in a while Hollywood takes a stab at doing it again.

Much of the later works related to the series, of course, come from notes from the author, Douglas Adams, and not by his hand as he died back 2001 (while he was working on getting his own version of a movie based on the series out into the world). Another author probably would have written more than five books in this series and a few other adaptations but Adams was famous for his desire to be doing anything than actually writing. He was practically criminal about this, hiding away, ignoring phone calls and emails, and doing everything he could to not have to focus on the one thing he was famous for. It was pathological, and even he admitted it. Everyone has their creative process and, for whatever reason, this process worked for Adams.

Certainly in the later books, as I remember them, the adventures will get weird and hilarious, and for this run through the series (before I go and tackle the one-season TV show and the movie) I was looking forward to going through and revisiting all these novels (which, it occurred to me, I hadn't read since I was 13). Thing is, at least in this first novel... the story just doesn't hold up for me as well as I'd expect. These are seminal works, mind you, comedies held high on the Mountain of Nerditry... and yet, this first novel fell a bit flat for me. Maybe it was because the comedy was expected at this point (it is the most adapted of all the novels in the series, many of those adaptations written by Adams himself). Maybe it was just because I didn't feel the novel had aged that well (there are a few moments where it felt a little to cringey, the book showing the era it was written in). But, for the most part, this novel just lacked energy for me.

The set up, mind you, is pure gold. Arthur Dent, just a random Earth person, wakes up to find that his house is about to be knocked down so an interstate bypass can be built. He should have known about it, the foreman of the wrecking crew says, as the documents were publicly displayed for six months (without any notice and buried in a file draw deep in the basement of the city hall without any guide as to how to get there). Arthur throws a fit, lays down in front of the bulldozer, and refuses to move.

That's when his friend Ford Prefect (a name that plays better, admittedly, in England where this novels originated) shows up. Ford, as it's revealed, is an alien (who has been on Earth for 15 years writing about the planet for the book-within-the-book, The Hitchhiker's Guide to the Galaxy) and now they have to get off. Ships are coming, he say, to destroy the planet so that an interspace bypass can be built (proper notice, of course, being posted way our on another planet). They have to escape immediately or get evaporated... and this then leads to a series of adventures as Arthur stumbles through his new life as a galactic hitchhiker.

Of all the material in this book (and the other versions of the story), this setup is the one true constant. Arthur, Ford, and the destruction of the Earth. It's great, too, because most stories would be about these two brave heroes finding a way to save Earth but, nope, within the first few chapters Earth is gone and these bozos are off exploring the universe. And while later novels do find a way to revisit Earth eventually, through weird means, this first novel just commits to the bit. Earth is gone, move along, nothing to see here anymore.

That said, once we're off Earth, exploring the Galaxy with companions Zaphod Beeblebrox and Tricia "Trillian" MacMillan, the novel loses a bit of steam. There's a plot in here about how the Earth was actually a giant computer set to calculate the question of "Life, the Universe, and Everything" (the answer being "42" which is another great and subversive bit), but most of that comes as an info dump explanation near the end. When the crew is just wandering and doing weird things, the book works. Once it has to get down to the story, though, it weirdly loses its momentum.

A lot of that is probably due to the nature of the adaptation. This novel was written based on an episodic radio series and that episodic nature carries over here. That leads to some chapters being info dumps as the story has to fit in a single radio episode, and it also leads to big jumps and new locations just appearing because that's where the next radio story went. It worked sometimes, it didn't work other times, and the uneven nature of the novel can all be blamed on this. The radio series came first and then the novel expounded on it. (And we'll see if the second novel suffers the same issues as it's also directly based on the radio series that came right before.)

And maybe it's just because I've read the novels once before, and seen the TV series, and watched the later movie (and played bits of the text adventure game as well). There's a lot of Hitchhiker's Guide out there, especially based on this novel, and what seemed fresh and interesting that first time through feels vastly less so on my sixth journey through the story. The surprise is gone, to be sure, and that can never be recaptured. I guess I'd just hoped that even if I knew where the story was going I'd still laugh at the humor. I didn't this time, and that left me a little disappointed.

Still, I have fond memories of the rest of this series and I'm game to see where it goes and if, for a jaded adventurer like me who's been here before, the second time can be the charm for the later works...