Star Wars Plus Conan Is Not a Good Mix

By 1983 there were two genres brewing in Hollywood. On the one side you had Star WarsThe modern blockbuster: it's a concept so commonplace now we don't even think about the fact that before the end of the 1970s, this kind of movie -- huge spectacles, big action, massive budgets -- wasn't really made. That all changed, though, with Star Wars, a series of films that were big on spectacle (and even bigger on profits). A hero's journey set against a sci-fi backdrop, nothing like this series had ever really been done before, and then Hollywood was never the same., the series started by George Lucas which finished out its first (and, at the time, only) trilogy in 1983 with Return of the Jedi. On the other were the barbarian epics, a genre that started getting popular again with 1982's Conan the Barbarian. I don't think anyone expected someone in Hollywood to try and mash the two genres together. 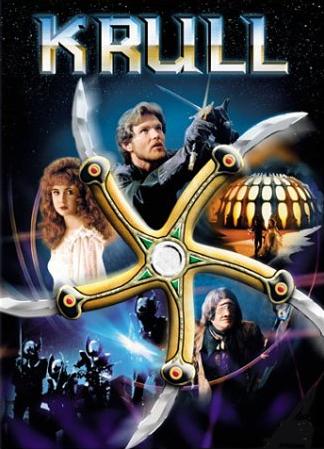 In fairness, Star Wars was basically fantastic epic in space, but it leaned hard on the space side of that equation. It might have had space sorcerers and laser swords, but it was still close enough to a sci-fi epic that no one would question its bonafides. It's far removed from the fantasy epics of Conan and its ilk, while space fantasy film Krull, released right at this sweet spot of 1983, feels much closer in tone to the "hero on a magical quest" genre that also overlapped with the barbarian epics. Bluntly, it was made to capitalize on Star Wars, when space epics were cool, but it was much closer to a low-rent, low-budget, planet-bound fantasy film.

In the movie, we watch as the castle of the Beast lands on the planet Krull. The Beast is intent on conquering the planet, and he sends out his army of Slayers -- bugs dressed in knock-off Stormtrooper armor -- to tear across the countryside and lay waste to all they come across. Meanwhile, we're introduced to two lovers: Prince Colwyn (Ken Marshall) and Princess Lyssa (played by Lysette Anthony, voiced by Lindsay Crouse). The two wish to be married, but their kingdoms have been rivals for centuries. However, at the approval of their fathers, both kingdoms are dissolved and a new one is formed with the two lovers as its leaders. Their marriage, though, is interrupted when the Slayers arrive, kill a bunch of the court attendants, and make off with the princess.

Colwyn is saved by Ynyr (Freddie Jones), a wise old sage. He helps the prince and guides him, taking him to a sacred place in the mountains where Colwyn can find the legendary Glave, a powerful bladed weapon that only a man of true potential can control. Weapon in hand, Colwyn has to collect a band of warriors -- sorcerer Ergo the Magnificent (David Battley), Rell the Cyclops (Bernard Bresslaw), and Torquil (Alun Armstrong) -- and together this unlikely group has to travel across Krull to the castle of the beast so they can take on the evil one, save the princess, and restore peace to Krull and its citizens.

So let's cover a few of the many issues with Krull. For starters, it has a story that's cribbed pretty heavily from Star Wars. You have your legendary hero, taught by a wise old man, who goes off to find a mystical weapon, collect a band of ruffians to fight against him, and defeat an evil space wizard (and his jack-booted thugs) in hopes of saving all humanity. That's the plot of Star Wars, and the only thing Krull does is make it more of a fantasy than George Lucas's first film in the trilogy. 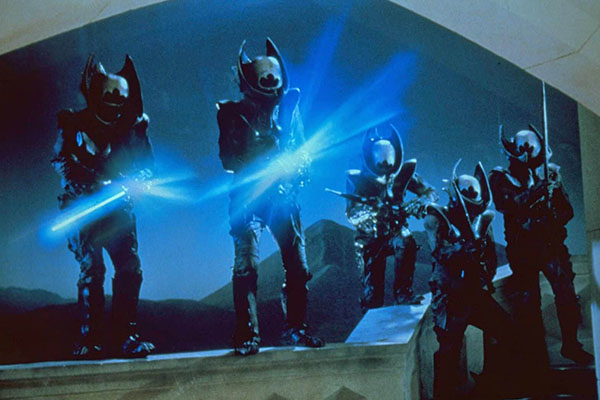 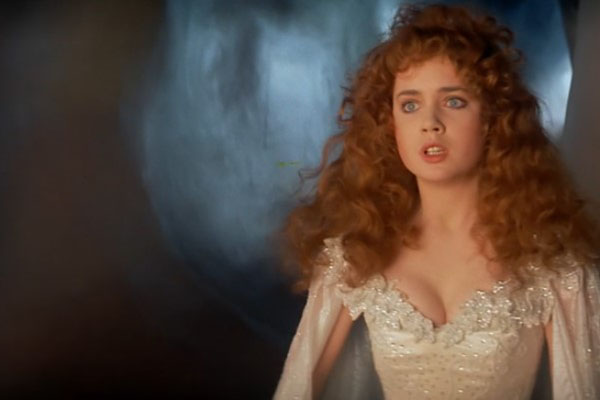 The comparison, frankly, does Krull no favors. While we all like to give Lucas shit for the later films he made, and how out of touch he seemed with the wants of the fans when he made the prequel trilogy, his first films in the Saga were good. Krull is not good. It's a bloated, pondersome, ill-conceived mess that probably wouldn't have been good any year that it came out. But going up against the last film in the first trilogy of the Saga in 1983 was a tone-deaf choice, for sure. This movie tanked at the Box Office because it didn't have what people were looking for. Hell, I'm not sure it was going to be what people were looking for in any year, let alone 1983.

There's the fact that the film, at two hours, is easily half an hour too long. It needed to be trimmed, to be cut down to the important moments, to remove all the filler and fluff that just draw out the scenes. There are characters that do nothing and add nothing, like the sorcerer Ergo, that could have been cut and their exclusion would have actually made the film better (Ergo is beyond irritating). There are plot lines that do nothing for the story, such as the Beast trying to court the princess and her repeatedly, and at length, rejecting his advances. While I appreciate them giving the female lead something to do, having her basically be a prize for both the men in her life was not the solution, and when nothing comes of it but for her to be saved by Corwyn (and not reclaim her actual agency) there's no reason for any of this to be in the film.

Now, if we compare the film to Conan, the style and tone make a bit more sense. That movie was a more ponderous and wandering movie, with long stretches of our hero going off on quests, finding random characters, riding across the steppes, and it made sense in the context of that film (although, in that movie, too, I felt like things could have been trimmed back some). The film, in fact, started life as a straight up fantasy film, Dragons on Krill, before transitioning into this weird sci-fi hybrid as the creation of the film progressed. I'm not saying it would have been better as just a fantasy film, but it certainly would have helped its focus some if it wasn't trying to justify its existence in this mish-mash genre it tried to create.

The problem is that, even up against Conan the Barbarian (or even the sequel, Conan the Destroyer), this film sucks. This is the kind of film that leaves you struggling to stay awake as the characters wander from one scene to the next, doing things in the moment but that have no actual bearing on the plot they're headed towards. It's formless, with a hero going on his "hero's journey" after he's already figured out all he needs to know about himself. That means that everything that happens along the way is pointless because no one is going to grow or evolve or change. It's just stupid. 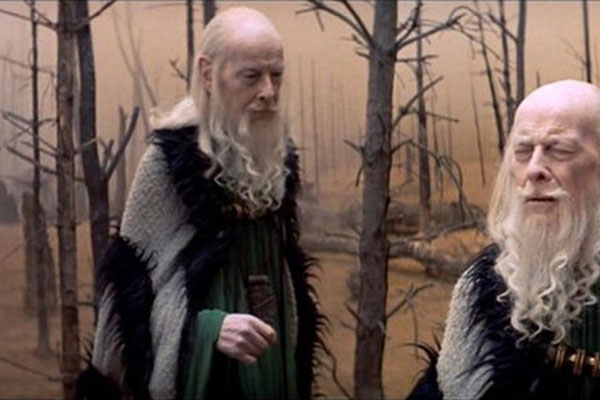 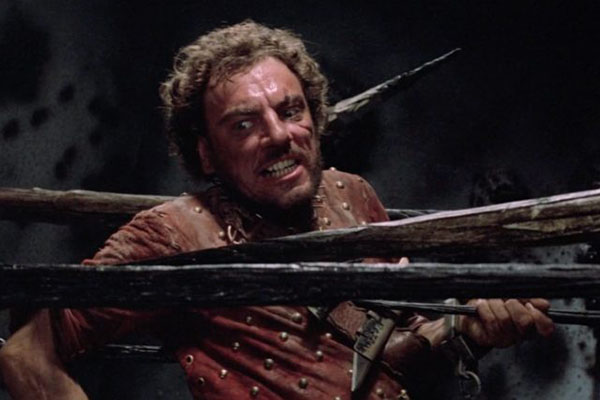 The one thing the film has going for it is the score. Watching the film I felt like I was hearing music from a knock off Star TrekOriginally conceived as "Wagon Train in Space", Star Trek was released during the height of the Hollywood Western film and TV boom. While the concept CBS originally asked for had a western vibe, it was the smart, intellectual stories set in a future utopia of science and exploration that proved vital to the series' long impact on popular culture. score... which I probably was. James Horner was the composer for the film, and he also scored a little movie called The Wrath of Kahn. Krull has a great score to it because it sounds like it's Horner jamming on whatever ideas he had leftover from Star Trek II that he didn't use for that movie. Horner noodling on space themes could power any movie, and it certainly elevated whatever scenes it was set to in this film. It's a pity the movie itself betrayed that solid score.

The thing is I don't know if Krull was beyond salvaging. It did actually have good cast members, like an early career performance from Liam Neeson, and the bones of the story could have worked (since they worked just fine over in Star Wars). The film just needed to be rewritten (again, as it apparently had already gone through repeated drafts) and then edited right down to the quick. At two hours this is a pondering mess, but at something like 75 minutes this could be a light, splashy, swashbuckling epic. It's not, and it's all the more tragic because of it.