Although there are plenty of storied franchises through video game history -- Legend of ZeldaCreated by Nintendo in 1986, the original Legend of Zelda game presented players with a open world to explore, packed with dungeons and monsters all ready to kill them at a moment's notice. The mix of adventure and action game play created a winning game and launched not only a successful series but an entirely new video game genre., Mega ManIn 1987, Capcom released Mega Man on the NES, a game featuring a blue robot that fought other robots and took their powers (so that he could then fight other robots with those powers, and on, and on). The series went on to release over 50 games in 30 years and become one of the most famous gaming franchises in the world., Resident EvilFirst released a Biohazard, the Resident Evil games, and eventually movies (awkwardly and clumsily) tell the stories of a world ravaged by zombies and the greedy corporate, Umbrella, seeking to profit from the mess. -- I think it's fair to say there's a small spot in many gamers' hearts for the Prince of Persia series. For a long time that affection was based on the original game, a cool looking action game (with puzzle-like elements) that was also ridiculously hard. You had a prince who had to scale a palace, from the dungeons up to the keep, and save your beloved princess in an hour or less before she was forced to marry the evil Jafar. Most of us couldn't even get out of the first level in an hour, let alone memorize the whole game well enough to complete the adventure in an hour. But you wanted to try. 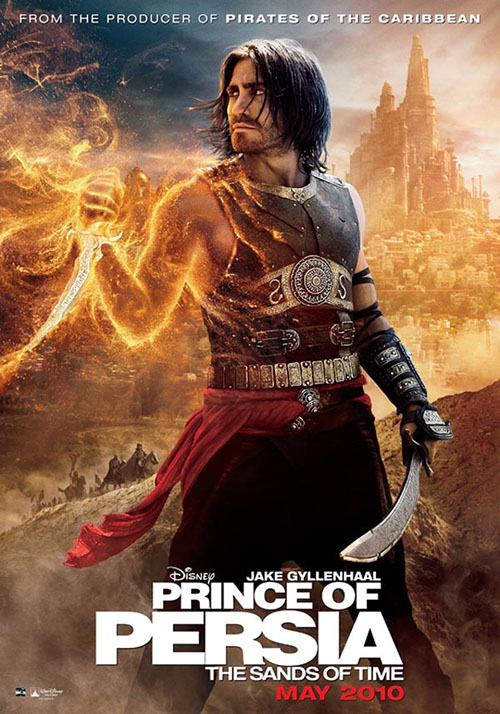 Although there were a few games that followed up in the series -- a direct sequel, a 3D attempt to update the series -- it wasn't until Ubisoft acquired the rights to the franchise that the game gained a second generation of gamers and their much craved delight. 2003's Prince of Persia: The Sands of Time took the core action-puzzle-platform mechanics and updated it for the 3D era properly. It mixed in cool action, parkour stunts (which were all the rage at the time), and a neat time-manipulation mechanic that helped set it apart. The game was a huge hit and spawned a number of sequels.

The thing was, though, that Ubisoft really didn't understand the magic of the first game and the later sequels messed up the mix of setting and substance (the second game, The Warrior Within, with its egregious seemingly Godsmack-inspired aesthetics, was particularly bad). The first game was such a huge hit that everyone stood up and took notice, but by the time the licenses were worked out and Disney was ready to produce and release a film, seven years had passed and its fair to say that the Prince of Persia name didn't have quite the clout anymore that it did when The Sands of Time, the film, was released in 2010.

Upon release the film was a modest hit, raking in $336 Mil at the Box Office. That was against a budget of $200 Mil, though, and after advertising and other ancillary spending, it's possible the film actually ended up a loss for the studio. It's hard to say that was entirely the fault of the film (although it is at least partially to blame) as Ubisoft was quickly running the franchise into the ground. Had The film come out soon after the release of the 2003 video game, when The Sands of Time was a mega-hit, I think the name alone could have carried this middling fantasy adventure. Instead, people actually judged the film on its own merits and, when viewed on its own, the Disney film is another middling swords-and-sandals epic (just, this time with some awkward Hollywood white-washing included).

Jake Gyllenhaal plays (the grown up) Dastan, an adopted kid taken into the palace of King Sharaman (Ronald Pickup) at a young age and raised as one of the King's own, along side his sons Garsiv (Toby Kebbel) and Tus (Richard Coyle). As adults, the three work as the King's enforcers, going out to quell rebellions and ensure peace across the Persian Empire (we'll just set aside the fact that an emperor, not a king, should rule an empire). While dealing with one such rebellion, the sons are brought information by the King's brother, Nizam (Ben Kingsley), about the holy city if Alamut which is, apparently, forging weapons and selling them to Persia's enemies. This is enough to cause the sons to attack Alamut (against the King's own orders) and take the city for the safety of Persia. 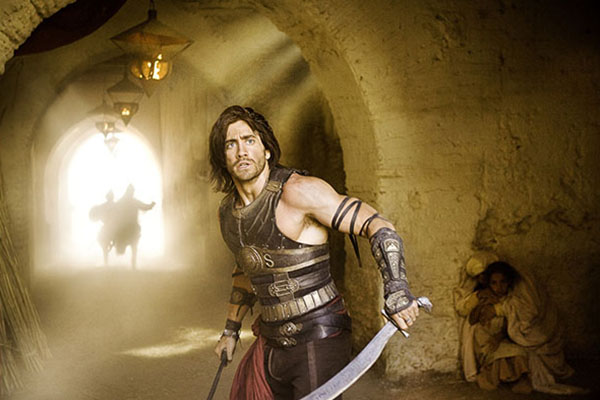 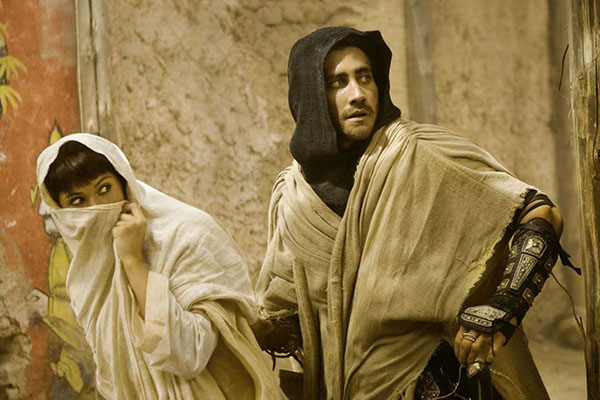 In the now conquered city, Dastan defeated a guard who was trying to flee with a treasure, a special knife with a lovely hilt. This is prized relic that the high priestess, Princess Tamina of Alamut, needs to retrieve, but other forces want the dagger as well. An apparently plot to kill the King, and frame Dastan for the deed, leads to the besmirched prince fleeing with the princess, going on the run so he can find a way to prove his innocence. But soon Dastan realizes the true power of the dagger, that it can turn back time due to special sands that reside in its blade. Dagger in hand, Dastan has to earn the trust of the princess and figure out who could have framed him and what their real goal may be.

Prince of Persia: The Sands of Time is a very uneven movie. It starts of with a rollicking first act before, figuratively and literally, getting lost in the sands for a good hour of its runtime, all before finally getting back on its feet and leaping into action for a zippy climax. It honestly feels like so many other generic, family-approved action films that come before, lacking the special appeal of the game it was very loosely based on. In that regard, I guess, it's a lot like all the games to come out after 2003's The Sands of Time.

Let's be clear, that 2003 game is a rather singular experience. You're just one person, on their own, working their way through a castle, using their wits and amazing action abilities to find the evil Vizier that put all the events in motion so he can set everything right in the end. That plot line is vaguely reflected in the movie that follow, except for the part where the princes takes a long jaunt out in the deserts, meets up with a criminal gang (headed by Sheik Amar), and... well, okay, everything that isn't specifically about the city of Alamut (which was a different city in the game, it should be noted). It's like the writer and producers looked at the original game, that was a huge hit, and decided that it was great but they had to change everything about it. "Persia is great, and we can do something with a knife that turns back time, but let's ditch the rest."

One of the things they ditched was all the great action. The Prince in the 2003 game is a lithe and active character, constantly moving and fighting, running along walls and defying gravity as he parkoured his way through the palace. The Prince in the movie can't do anywhere near that much largely because Jake Gyllenhaal, for all his willingness to throw himself into action stunts, doesn't have the physical abilities, or the grace, to perform all that the game-Prince did. Thus, the film ends up toning down a bunch of the action to focus on a romantic storyline between the Prince and Princess (because of course), making something less action-packed, and vastly less interesting. 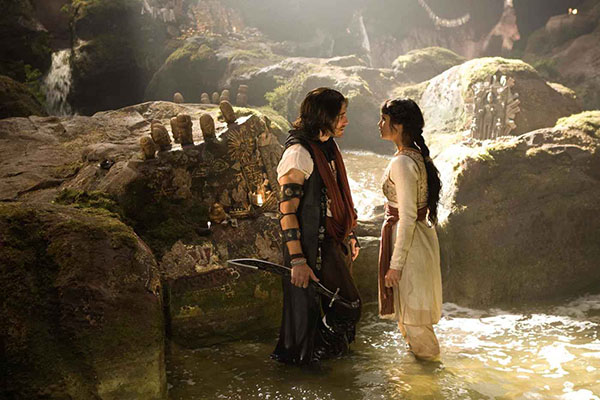 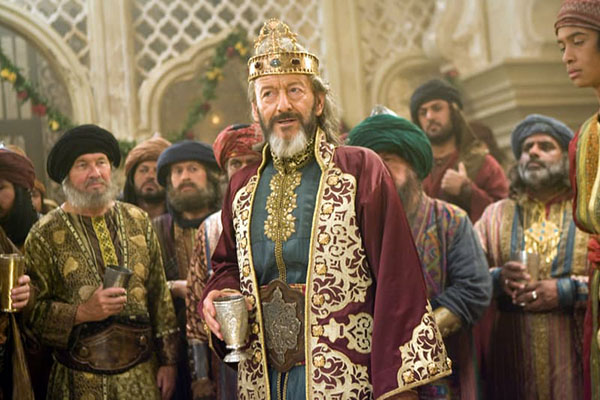 I like Jake Gyllenhaal as an actor, mind you, but he wasn't the right person for this role, and not just because he couldn't do all the stunts the way the video game did. There's also the issue of an entirely white cast explicitly playing Persians. While I fully understand picking the best actor for a role, Hollywood has a bad habit of picking white people to play roles of every other nationality when there was plenty of people from that actual region who can (a) act very well and (b) would be more than willing to be in a movie like this. The fact that not a single one was could for this film reeks of Hollywood not even bothering to make the attempt. Jake Gyllenhaal later went on the record saying he essentially shouldn't have taken the role, and with the blow-back that came from all the casting choices its not hard to see why.

In general this feels like a bungled film. It's well acted, for what it is, and it has lovely production values (you can see much of the $200 Mil budget on screen), but in the end Disney managed to turn out a film slightly better than The Scorpion King -- a little less goofy, but still clearly of-a-piece with that Universal film. You want better from an adaptation of one of the best games to come out in the early 2000s. Sadly, between this film's lack of success and Ubisoft driving the game series into the ground it's hard to think the Prince of Persia series will get another chance to make a lasting impression on the big screen.