A Marked Shift Into the Supernatural

It's interesting to see Slasher series evolve over time. Many of them try to invest in what worked before, with HalloweenThe franchise that both set the standard for Slasher horror and, at the same time, defied every convention it created, Halloween has seen multiple time lines and reboots in its history, but one thing has remained: Michael Myers, the Shape that stalks Haddonfield. and Nightmare on Elm StreetThe brain-child of director Wes Craven, A Nightmare on Elm Street was his answer to the glut of Slasher films that were populating the multiplex. His movie featured an immortal character, Freedy, with a powerset like none other, reshaping the expectations for Slasher movies to come. churning out a lot of films that feel very much the same over and over. Friday the 13thOne of the most famous Slasher film franchises, the Friday the 13th series saw multiple twists and turn before finally settling on the formula everyone knows and loves: Jason Voorhees killing campers 'round Camp Crystal Lake., too, would always head back to the comfort of what worked before, but it would do so each time after trying, and failing, to find a fresh angle on the camp counselor killer. Fans expect their films to come one way, and the few times a Slasher will go outside the bounds of comfort, that's generally when the fans reject them (of course, eventually they reject the films for being too much the same as what came before, so there's really no winning). 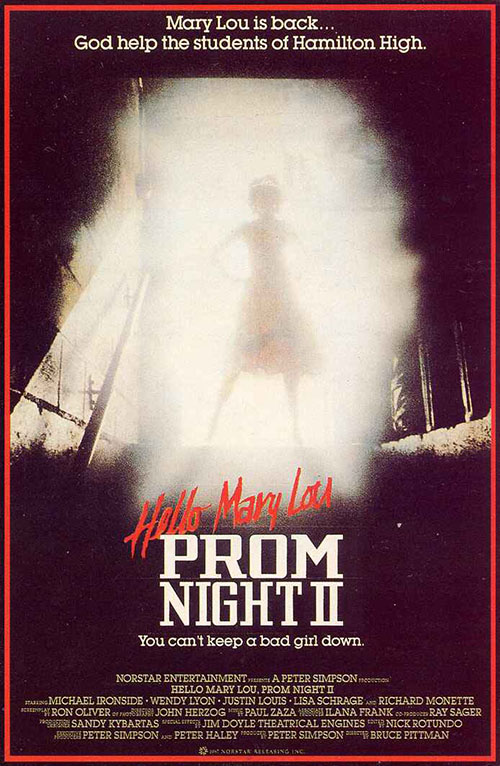 Sometimes you get a Slasher series, though, that thrives on going in different directions. We saw that with Urban Legends and the supernatural horror of Bloody Mary. Supernatural was also the direction taken with the third I Know What You Did... film, I'll Always Know What You Did Last Summer, and much earlier with the horror-comedy of Slumber Party Massacre II. For any of these smaller series it does feel like supernatural is the way producers want to go to goose sequel numbers and try to drag people back for another outing in the universe.

Supernatural horror is also the direction the Prom Night series took with its second film, although that's in part because the film wasn't originally supposed to be a Prom Night sequel. Development began on The Haunting of Hamilton High, with the film shaping up to be something more akin to a Nightmare on Elm Street flick, just with a female supernatural killer. Really, this film bears more resemblance to the Nightmare films (especially the second on, Freddy's Revenge, with it's killer trying to break into the real world by taking over the body of its victim) that anything that came from the first Prom Night.

Were it not for the name "Prom Night" being attached to this movie, you wouldn't even know Hello Mary Lou: Prom Night II was supposed to take place in the same universe. I'd say attaching the Prom Night name to this movie did it a disservice, but I honestly hated that film and rather liked this one. But back in the early 1980s, the first Prom Night was a big success while this film was a drastic departure. Hated by critics, and seemingly also by fans, this horror cheapie only managed to break even at the Box Office (in Canada, no less) before disappearing to video store shelves. And that's a pity because, while cheap, this film at least manages to do one thing the previous film didn't: tell an interesting story.

Back in the 1950s, Mary Lou Maloney (Lisa Schrage) was Queen Bitch of Hamilton High. Adored by her peers, and randy with the boys, Mary Lou got whatever she wanted, when she wanted it, and knew she could wrap just about anyone around her finger. She ditches her boyfriend at Prom right before being crowned Prom Queen, but when a prank against her goes south, and Mary Lou catches on fire, the reigning Queen becomes a flaming corpse in short order. Needless to say, the Prom was ruined (with stories of it being told for decades to come). 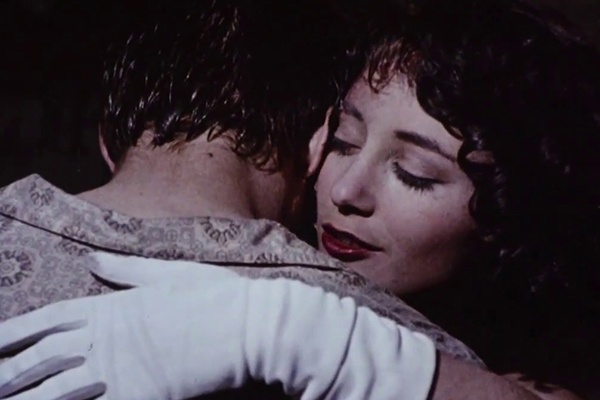 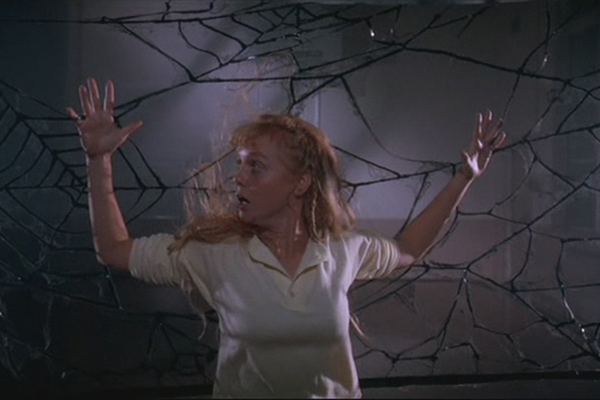 Cut ahead 30 years and we join soft-spoken Final Girl Vicki Carpenter (Wendy Lyon) as she's gearing up for her own Senior Prom. She's in the running for Prom Queen -- up against new Queen Bitch Kelly Hennelotter (Terri Hawkes) -- has a great boyfriend -- Craig Nordham (Justin Louis), son of Principal Bill Nordham (Michael Ironside) -- and just has to get through the year before she graduates and can figure out what to do for college, her boyfriend, and her life in general. Unfortunately for her, when she goes digging around in the Props Department of the high school theater she stumbles across Mary Lou's Prom Queen Crown, and just touching the tiara awakens the spirit of Mary Lou. The Bitch is back, and she's none too happy, looking to exact a little revenge (and a lot of murder) before Prom is done.

Hello Mary Lou is a pretty obviously cheaply made film, just like the first movie, but it does know how to put its horror sensibilities to good use. It takes its time on setup, giving us the back-story of Mary Lou before jumping ahead and letting us settle in with our various characters, all the friends of Vicky, before eventually letting Mary Lou come out. It works here because the film invests in the teens we're watching, fleshing them out to be slightly more than just cookie-cutter archetypes, and that helps when the horrors finally do come.

The first kill is one of Vicky's friends, and it's the spirit of Mary Lou that does the killing. But soon enough Mary Lou finds a way to take over Vicky's body, and that's when the carnage really comes out. I'll admit, Lyon seemed a little lost playing to overly nice Vicky but she does a great job when she's portraying the possessed girl, and it's clear the Lyon had much more fun in this second-half of the dual role. She vamps and chews scenery and it elevates the back half a fair bit, making the carnage more fun to watch.

The movie also gets a lot of mileage out of creative stunts and special effects. Famously they setup a couple of different shots that required building a room on its side, filming actors in tanks attached to "walls" to pull off creepy special effects (like characters getting pulled into blackboards that oozed around them). There's a lot of nifty practical effects in this film that really help to make the movie gross and tingly. In fairness there are also a couple of dumb special effects (like one kid getting electrocuted in the worst looking way possible) that don't work as well, but when the movie focuses on the practical side of the horror, it works really well. 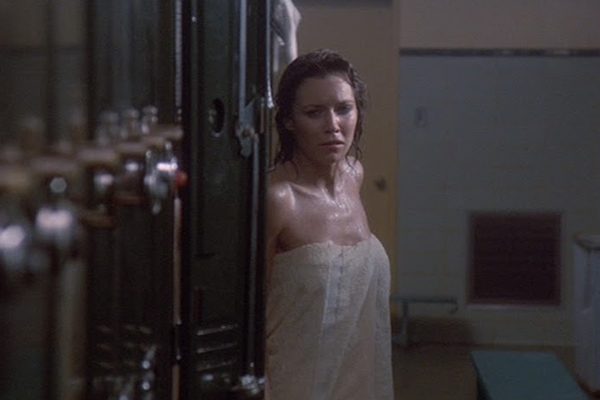 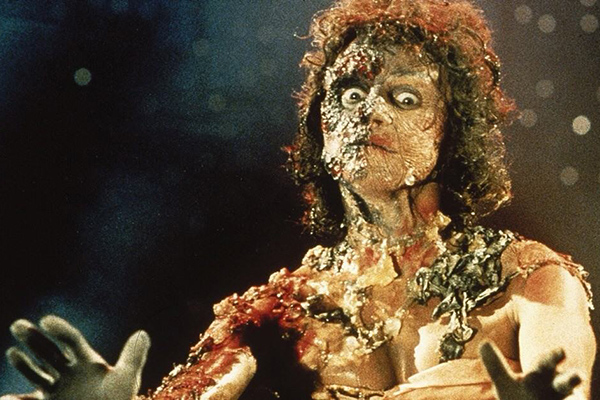 All that being equal, the movie does fall apart a bit in the climax and wrap up. The film doesn't really defeat its villain, instead just having the characters sort of appease her so she she goes away (or does she?!), which is vastly less satisfying than a proper fight between heroes and villains. And, as noted, there are some kills at the end of the film that don't live up to the cool effects and neat ideas of earlier in the movie. The ending, in short, feels rushed, which might be a symptom of the extensive re-shoots the producers called for to turn this film into a Prom Night sequel.

That said, this film is still more creative than many of the Slasher ilk to come out during the era. Its interesting, with low budget appeals and a solid amount of gore and practical effects to keep horror hounds interested. It might not be a top-tier film, but considering the crap we've already seen in this genre, it's a damn sight better than most Slasher films I've reviewed. If nothing else, it's much more interesting than the first Prom Night, even if it was nowhere near as successful.

Underage drinking, sex, and lost of promiscuity, and that's all from Mary Lou in the first bit of the film. She was quite the party animal.

Mary Lou, having ditched her boyfriend at the Prom to go make out with another guy, then gets crowned Prom Queen. But, her boyfriend, having found a stink bomb a couple of other guys left sitting around, lights the stink bomb and throws it on stage. The fuse catches Mary Lou's dressed and she goes down in a fiery wash of flame, screaming. Pretty good makeup effects for it, honestly.

Six. Mary Lou, plus four students, a priest. Although it's arguable if Mary Lou's death counts or not since she's also the spirit haunting everyone.