With the massive (and frankly unexpected) success of Pirates of the Caribbean: The Curse of the Black Pearl, a sequel was all but inevitable. Disney had the makings of a billion-dollar franchise and they were seeing money signs all the way home. There was no way the Mouse House was going to let this get away from them so they locked down all the major actors from the first film and set a team to bang out a sequel just as quickly as they could. 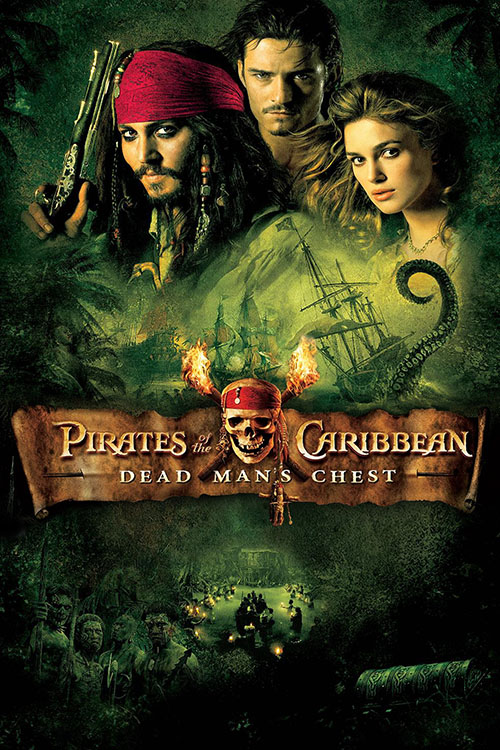 Anyone that knows anything about the creative process can probably point out the issue here: Curse of the Black Pearl was never intended to be the start of a franchise. While Disney knew better than to put a definitive ending on the film, leaving all the characters in a place where they could come back or not as they saw fit, the original film was a self-contained tale. There wasn't a big mystery left to resolve, or some other treasure that was discussed that we absolutely had to find in the next film. Anything that came after would have to justify its existence.

Or, well, not, as sequel Dead Man's Chest proves. What everyone on staff knew was that this next film needed to be bigger. It needed to double-down on everything that made the first film a success: more action, more comedy, more romance, more fantastic creature and, most of all, more Captain Jack Sparrow. Johnny Depp became an A-list actor with the first film so he had to be front and center and a major part of just about every scene. If he wasn't in a shot then the sequence had t still be about him. The first film was about Orlando Bloom's Will Tuner and his lady love, Keira Knightley's Elizabeth Swan, with Jack as a sidekick, but here it's the Jack Show with special guests those two other stars that were in the first film.

This is going to be the refrain about every film in the series going forward but Captain Jack is not a protagonist. The hero of the film for whom the story is built, is someone still discovering themselves. They're motivated by the sequence of events in the story to change and evolve and become more interesting. They have an arc. Captain Jack doesn't have an arc -- he's birthed in the first film a fully-formed fop and over the course of the series he remains the exact same characters with the same needs (doing as he likes) and wants (anything that lets him do as he wants). He doesn't become a better person and the only times he does anything heroic is because he's forced into it.

It's funny because this sequel does, in fact, have two hero arcs -- one each for Will and Elizabeth -- but both of them are in service to Jack and his antics. Will is sent on a quest when Lord Cutler Beckett (Tom Hollander), chairman of the East India Trading Company, arrests Jack and Elizabeth for aiding in Jack's escape at the end of the first film. To clear their names, and secure pardons, Will has to ind Jack and get back a magical compass that Jack has been carrying all this time (in the first film the compass pointed to the Black Pearl and the treasure that ship was tied to, but now its retconned as a compass that points to "your heart's desire"). Get the compass and bring it back and all charges (supposedly) will be dropped. This leads Will to Jack's crew, antics ensue, and then Will gets tied up "repaying" Jack's debt to Captain Davy Jones (Bill Nighy), a man-turned-sea monster who leads a similarly populated ship of monster-men and who controls the deadly Kraken. 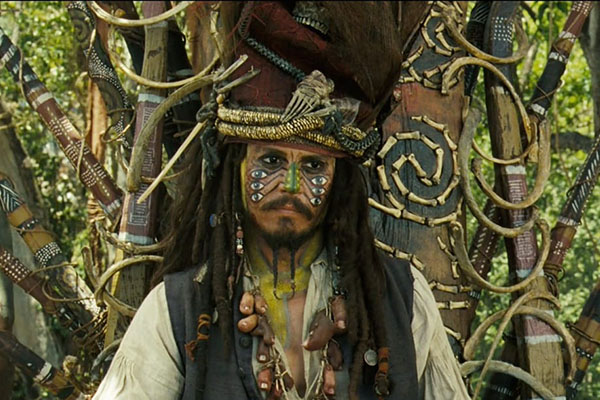 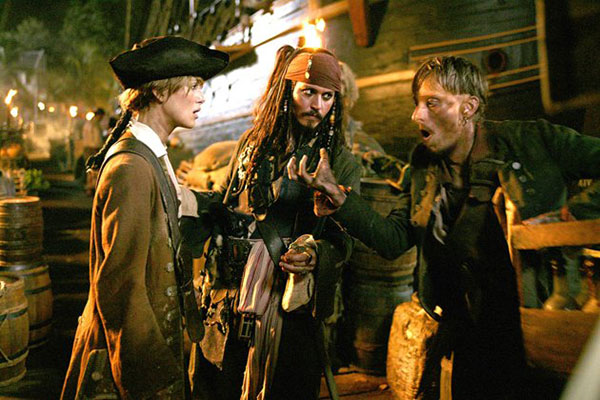 Meanwhile, Elizabeth secures her own escape and heads off to secure said pardons and also find her true love. But, once she finds Jack she learns that Will is on Jones's ship. At the same time, Jack is putting his charisma to work on her and this makes her all muddled about who she really wants: the dependable, sexy hunk she's known all her life or the arrogant fop who smells bad and is drunk all the time; it really is the decision of the ages. Elizabeth had to find Will, help him get his freedom, and somehow get some other McGuffin that Jack needs: the key around Jones's neck that unlocks the "Dead Man's Chest" which has Davy Jones's still-beating heart in it for... reasons? Honestly, at this point the film just throws is hands in the air and stops really trying.

I get why Davy Jones is in this film. The first movie had Barbossa and his band of undead pirates, and that film was a success. We couldn't have those guys back in this film because they were made mortal at the end of the last movie, so we needed a new, preternatural threat for our heroes to face. To solve that, the movie gives us pirate sea monsters and, wow, are they awful. The CGI on these guys hasn't aged well (and, frankly, didn't look that great back in the day), but their transformation also doesn't really make a whole lot of sense. The guys are undead, yeah, and they slowly get covered in barnacles and other crap (as they ship dives under the water and sea creatures infest). But there's little explanation of how some of these guys turn into shark-men or hermit crab-men or, in the case of Davy Jones, an octopus-guy. The designs are interesting but they make absolutely no logical sense.

On top of that, Davy Jones is a character removed enough from the action that we don't really understand him as a character. He's the big bad of this movie (and the next, as these two were filmed back-to-back) but the film never really establishes what he wants, what his motivations might be. He lacks a clear arc (unlike Barbossa who was motivated to get all the cursed treasure back so he and his men could break their curse and no longer be undead monsters) remaining an ill-defined monster from start to finish. Cool designs can make up for a completely hollow interior, and Davy Jones and his crew are all hollow creations.

The biggest sin of the film, though, is bloat. The movie spends a lot of time putting the "heroes" (i.e., our band of pirates and protagonists led by Jack) in one scrape after another. These sequences are full of action (an escape from a frankly-racist island of cannibals, a giant chase sequence/sword fight on a massive wooden water wheel) but they do nothing to further the actual plot. The film is two-and-a-half hours long, but if you actually focused it on the parts that had real story in them, sequences that honestly furthered the plot or characters or something, you'd have about an hour of actual movie here; everything else is just distraction and padding. 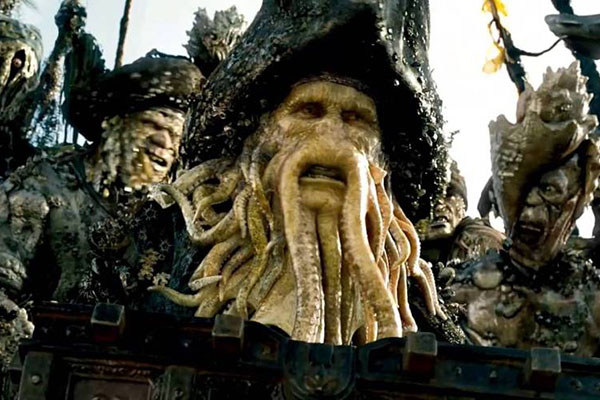 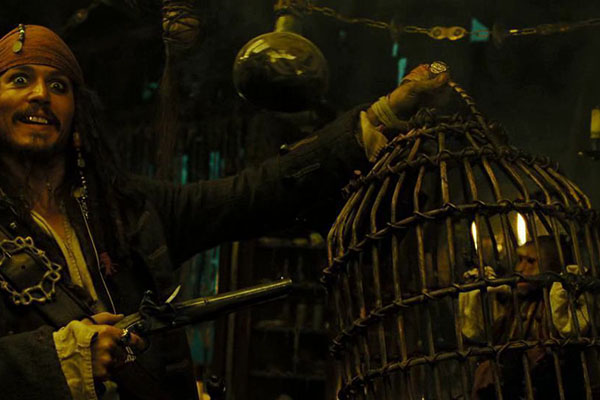 It's tragic, really, because when the film focuses on the two characters that should be the actual focal point of the film -- Will and Elizabeth -- it starts to click together. These two have real character arc, are working to help each other and grow as people, and the two actors (Bloom and Knightley) have acting chops and romantic chemistry for days. They could lead this film and make it watchable. But for most of the film we're focused on Jack and, even here, his shtick is starting to wear thin.

Jack is still funny, still have good moments, and is still reliably played by Depp, but there's just not as much to him here as there was before. The first film got a lot of mileage out of exploring Jack, using him to bounce against other characters and comment on their stories, and we learned about him in that film as he played with everyone else. Here, though, we already know everything about Jack and the film has nothing new to say about him. He's still drunk, he's still out for himself, and he's still hunting treasures that don't belong to him. Another nasty pirate is after him but it's all the same story we saw before.

In short, Jack was the reason the first film worked but he's the very reason this film completely falls apart. Disney had a winning hit the first time around so they went all in on the franchise and made the key ingredient, Jack Sparrow, the center of the second film. Jack can't support a film as the focal point no matter how much the film tries to retcon everything we know around him to force him into the center. There's something missing from the core of this film, a proper hero to lead the way, and in its place they put the ill-fitting Jack who wants nothing to do with the role as he slogs off for a pint of rum.

Of course, based on the good will of the first film and people wanting to see more adventures in this continuity, this second film was a smash hit, raking in over a Billion dollars at the Box Office. Having films this movie with its sequel back-to-back ensured not only that Disney would have another success with the sequel but that we'd have to suffer another movie all about Jack Sparrow. Even the end of this film sets that up, so be ready for another review of all the ways the third Pirates of the Caribbean film over promises and under-delivers. 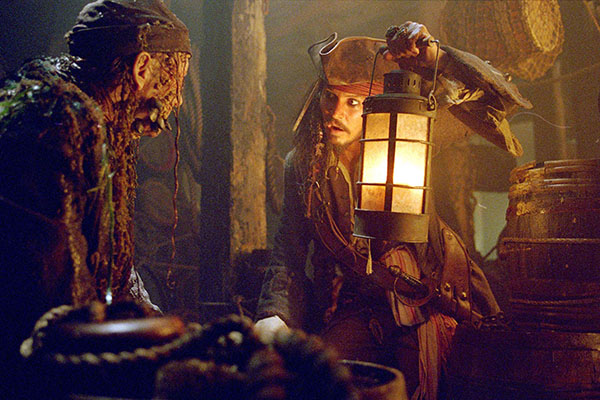 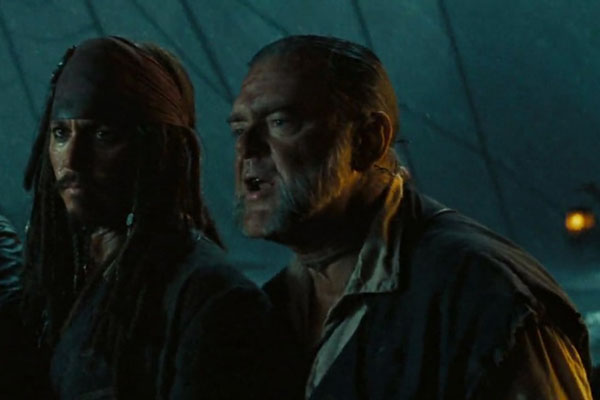 Pirates of the Caribbean: Dead Man's Chest is a sumptuously made film, with great production values and a strong directorial eye behind the camera. This is a film that could have been a success not only monetarily but also critically. Unlike the first film, though, it hasn't aged well as people realized over time there's no substance here. It's two-and-a-half hours of Johnny Depp stumbling around and, after one movie of that, I've more than had my fill (but I'm sadly nowhere near done with these movies).