A Pirate's (Un)life for Me

Pirates of the Caribbean: The Curse of the Black Pearl

When it first was announced, the prospect of a movie based on a Disney attraction made that film seem like a huge and terrible mistake. Bear in mind (no pun intended) this was one year after the atrocious The Country Bears film came out, three years after the little loved Mission to Mars, and six years after the made-for-TV film I bet you didn't even remember existed, Tower of Terror, and while this film was being developed we also had the (critically reviled) Eddie Murphy vehicle The Haunted Mansion that came out later in 2003 and was promptly forgotten. What I'm saying is that Disney didn't have the track record to pull off a film based on one of their rides. 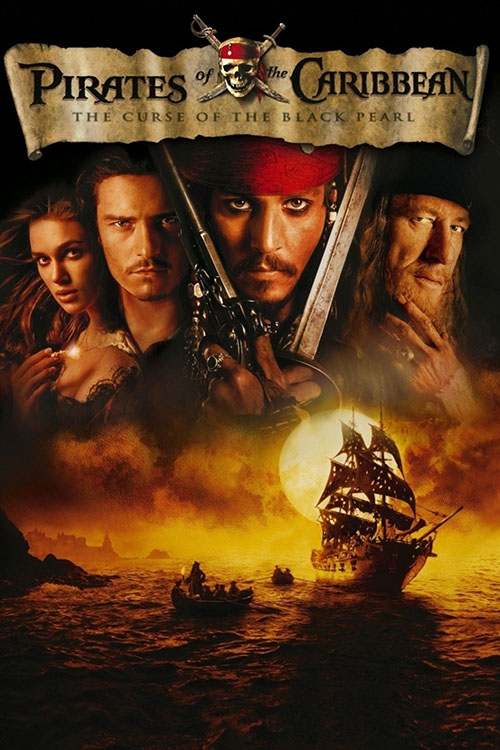 That's to say nothing of the fact that swashbuckling pirate epics had fallen out of vogue at the Box Office, not since the spectacular failure of Cutthroat Island in 1995. Spending a reported $140 Mil on a pirate epic, whether or not it had Disney's backing behind it, seemed like a real folly. Who would want to see a film, based on a ride, set in a pirate theme, when the biggest stars in the film were Legolas (Orlando Bloom) and a girl that played one of Padme's handmaidens (Keira Knightley)?

A lot of people, actually. Upon its release, Pirates of the Caribbean: The Curse of the Black Pearl (which is an absolute mouthful to say) became a dominant force at the Box Office. Perhaps people wanted to have their swashed buckled. Maybe it was the blend of fantasy elements, and a bit of undead horror, in with the bright colors and splashy sights. But, in reality, the reason why the film became such a mega-success was because of B-list character actor Johnny Depp who stole the show as Captain Jack Sparrow. Orlando Bloom might play the hero, Will Turner, but this is the Depp show, through and through.

It is curious that Depp became the star of the film as, before this movie, he'd been most in lower-budget films that let him play eccentric weirdos. That was his bread and butter ever since he threw off the label of "teen idol" after leaving 21 Jump Street. The actor famously wanted his fame to be done his way and would go out of his way to make his characters weird. If the studios weren't complaining about all the things he was doing in his performances he'd just push it harder.

Captain Jack is the perfect distillation of all of Depp's various ticks. He's a strange character, hair all messed up, nasty teeth and a weird outfit. He rolls in to the film like he comes from a different movie -- a funnier, stranger film -- and it's clear from his drunken persona and constant asides that Depp was basically ad-libbing most of his performance as he went along. Anyone else in the role would have played the character as a much more normal character, maybe a little eccentric but someone that could live up to the mythology built around the character. Depp, though, leaned into his instincts and here, more than in any other film he'd ever done, it worked. 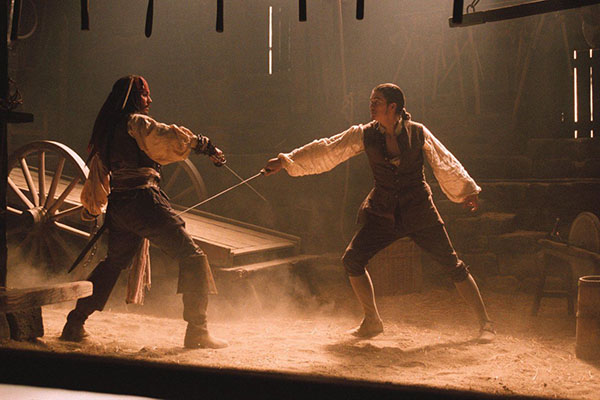 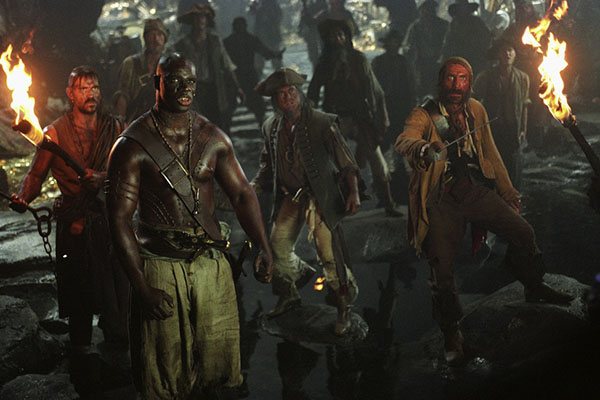 You can see this from the way the rest of the film is played. While, yes, there is humor in the film -- this isn't a film that takes itself too seriously -- it's a different kind of humor from what Depp brings. The rest of the film feels like a pretty safe, Disney's style film, with cute jokes but nothing that will offend. Depp, though, brings a bawdiness to the proceeding, not only taking the piss out of an otherwise pretty normal Disney action film, but then adding a layer of humor and style to everything. Without him this film would be a safe, and staid, family action film. With Depp in the driver's seat, the film takes a hard turn into crowd-pleasing excellence.

No one could have expected that Depp would take the lead, at least not until the first trailer for the film came out and showcased his character. Before that, this seemed like it would be a star vehicle for Orlando Bloom. Coming off the back-to-back-to-back success of New Line Cinema's Middle-earthCreated by J.R.R Tolkein, Middle-earth is the setting for the author's big sagas, featuring the characters of hobbits, dwarves, elves, and men. trilogy, The Lord of the Rings, Bloom seemed like he was destined to be the next big "it guy" in Hollywood. This film should have been his big hit, a movie that showcased his leading man status and would drive him forward into even bigger roles. Sadly, he was not only forced to play against Johnny Depp in that actor's best role, but Bloom's Will Turner is a pretty boring character. He should be the hero but he's clearly second banana to Captain Jack.

Maybe part of the issue is Bloom, who seems to have lost a big chunk of his charisma the second he took off Legolas's elf ears. But frankly Will Turner isn't that interesting. He's the town blacksmith at the port Captain Jack lands, a generic hero type destined to fall in love with the governor's daughter, Knightly's Elizabeth Swan, and go on a hero's journey where he learns all about himself. But he has to compete not only against Jack but also a band of colorful pirate characters, and a ship full of undead sailors (those afflicted by the titular "Curse"). Plus, you have scenery-chewing Geoffrey Rush as the evil pirate leader, Captain Barbossa; Bloom's bland charm can't hold a candle in that setting.

Knightly does perform somewhat better, but her character has much less to do than even Bloom's Turner. She gets to act spunky and find some big-dick energy to go up against the pirates, but much of her time on screen she's stuck as either a damsel in distress or a treasure to be won. For all of Knightly's acting ability, and she does infuse Elizabeth with a lot of charm and charisma, she has even less of an arc than Bloom's Will, and both of them seem lost in a sea (some pun intended) or pirates and Depp. 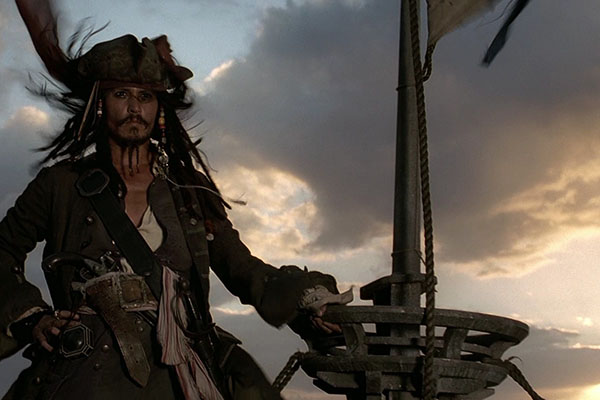 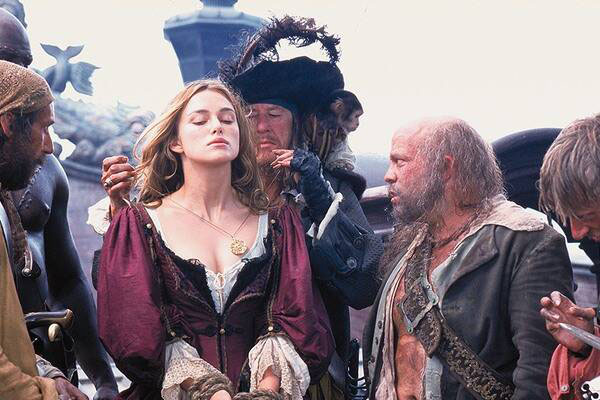 Were Depp not in the film, Bloom and Knightly certainly would have had more to do. They would have shone brighter and their characters probably would have been the focus of the film (while Jack's agent of chaos role would likely have been far less prominent). But Depp steals every scene he's in and eventually the film bends around him, not the other way around, bucking Hollywood conventions to make the lead couple sidekicks to the crazy fop who starts, and ends, the film in basically the same spot, character wise. Jack has no real arc -- he's out for revenge, gets his revenge, and continues being himself -- but you hardly notice that while watching the film. Jack is just too much fun to ignore.

The thing is that this isn't the kind of trick you can pull off twice. Yes, this one film launched a massive franchise that went on to make billions of dollars, but none of the latter films (which we will cover) have the same kinetic energy as Curse of the Black Pearl. Every subsequent Pirates of the Caribbean films would pull Depp's Jack further and further forward, leaning more and more on his eccentric shtick to carry the film. But as much as Jack is the focus of this film he's not the hero and you can't make a character like this into a hero. He's too weird, too invested in his own welfare, and he'll never change. That's fantastic for a character who hangs out in scenes and acts like a comedic foil, but that's nothing something you can lean an entire franchise upon.

Not that Disney didn't try. Four more times. And raked in a lot of money in the process, but nowhere near as much critical approval. Critical approval doesn't spend, though, so the franchise trucked on, and promises to continue on even without Depp's lead performance anymore (since Disney has cut ties with the actor after all his personal issues came to light). Whether you like the rest of the films in the series or not, there's no denying that Curse of the Black Pearl was Depp's moment to shine, and he made everything of the opportunity that he could.