I don't think the world really needed a sequel to Escape from New York. I get why a studio would want to greenlight the production: the film ended up being a bit of a cult hit, successful at the Box Office while having legs among Sci-Fi nerds. If they could milk more money out of a sequel, especially after the series experienced a bit of a resurgence from a run of Marvel comics the year before, then it makes perfect financial sense. But from the standpoint of the series, what more was there to know? Snake Plissken was a cypher, a guy that showed and did a job then faded back into the shadows with little more than a sneer and some nasty words. What could a sequel possibly do with a character like that? 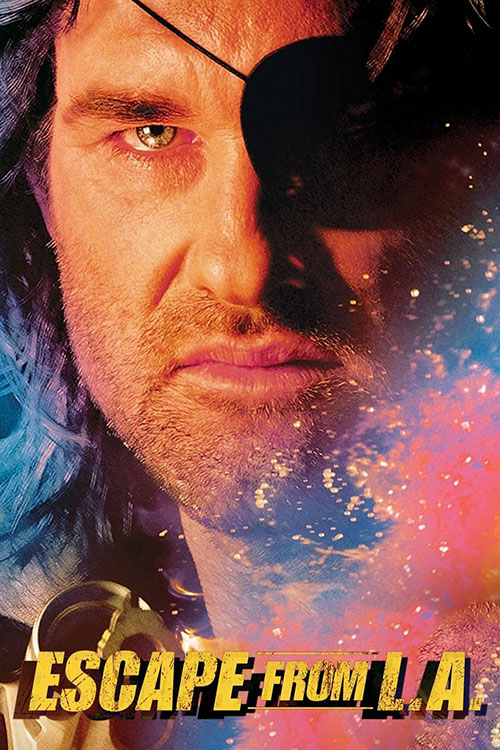 As if in answer, 1996's Escape from L.A. said: not much. It's a film that, from introduction to the length of its execution, goes though all the same motions as the first film without ever adding anything new or special to the proceedings. It's perfectly content to remake the previous film on a large budget, but also make it much worse in the process. As if to show the hubris of that, the film made the exact same amount of money as the previous film ($25 Mil) on nearly ten times the budget ($50 Mil). Also, it's just a terrible movie all around.

Set 16 years after the original, Escape from L.A. sees the awful state of the world in the first film and upps the ante. In 1998, L.A. had descended into chaos, becoming a morally bankrupt city on the West Coast, decadent and over sexed. Elected into office promising moral responsibility, along with retribution towards the heathen city of L.A., the President (Cliff Robertson) swore that the end was coming for the city. And then, sure enough, two years later a massive earthquake centered on L.A. killed a ton of its citizens and separated the city from the rest of the country, a floating island. Having seen his prophetic powers, the country elected the President for life and let him do as he liked. So he made L.A. into a prison island and started shoving everyone that wasn't a "proper American" onto it: the atheists, Muslims, fornicators, prostitutes, and smokers (among others).

Now, years later, the President has a problem: his only daughter, Utopia (A. J. Langer), has stolen the controls to a powerful device and fled into L.A. having fallen in love with charismatic gang leader Cuervo Jones (Georges Corraface). Together they plan to use the controller, which is tied to a series of weaponized satellites armed with EMP guns, to cause total havoc across the world. And the only man that can go into that island, kill Utopia, and get the remote back is, of course, Snake Plissken (Kurt Russell), the recently recaptured criminal mastermind. Now he has ten hours to pull it of and bring the device back to the President. All in a day's work for Snake.

Credit where it's due, the one thing this film gets right is in its ideas about how far the extreme right wing of American politics is willing to go. Although this film came out before th second Bush administration, it certainly feels like it was written in anticipation of that administration. Of course, having now sat through four years of Trump, this movie feels especially prescient in its early going. A leaders that feeds on the fears of a country, uses those fears to become a dictator, and then bungle the country to the point that it loses all its allies and ends up weakened beyond all repair? Yeah, sounds about right. 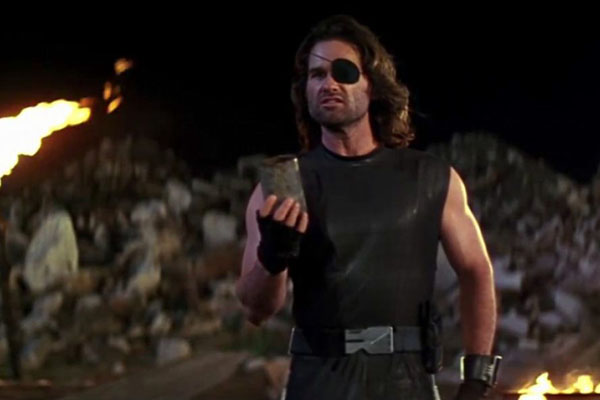 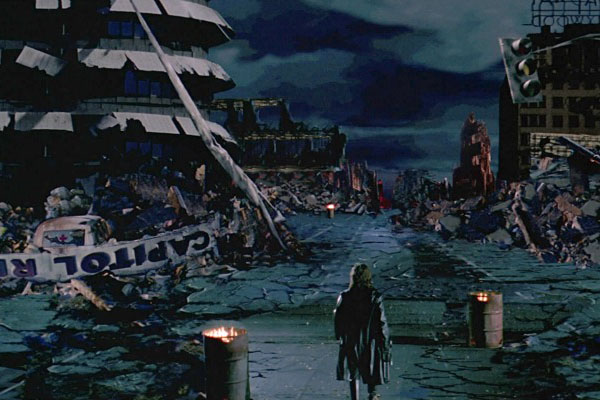 That intro setup, though, is about the only thing this film gets right as, in all other respects, it's a complete mess. Let's get the largest and most obvious issue out of the way up front: this film is nothing more than a shallow retread of the original film. It goes, beat by beat, through all of the moments of the original, finding a mirror-like version it can pitch instead, all so it can give us the exact same story again just sixteen years later. Nothing about this film is fresh or interesting or new, it's just Escape from New York all over again, except set in L.A.

There have been plenty of sequels that, in their own way, have retreaded the original material but still managed to find enough of a spin to create a story that still felt fresh and interesting. We recently covered The Karate Kid Part II, which took the bones of The Karate Kid and rearranged them to create something, just different enough that it remained fun and interesting. Escape from L.A. doesn't do that, in any way, shape, or form. It loses all sense of fun and enjoyment, crafting a film that's both soulless and stupid, vapid to the point that it's just depressing to watch.

Really, what holds the film back is that it's just so stupid. It doesn't know how to have fun, to find amusing moments of sly comedy to spike the Sci-Fi action. Where the first filmed treaded that line between knowing comedy and straight-faced action, L.A. treads right over that line, turning to the camera and mugging. Every bit of comedy is meant to say, "hey, this is a wacky future, aint it?" as if it were Bugs Bunny saying, "aint I a stinker?" And yes, it is a stinker, just not in the way the film meant. Every moment, every insipid sequence, just helps to cement the fact that this is one of the dumbest, least funny, poorly conceived sequels I've ever seen.

There's basically nothing redeeming about the film, not once it gets off the ground and starts moving. The production quality is low, with bad CGI and terrible makeup effects. The direction is lazy, without any of the daring shots or well conceived sequences you'd expect from John Carpenter. The film trades insightful social commentary and good action for jokes about Hollywood (made by a Hollywood insider) and terrible action that wouldn't be out of place in a Z-grade Kevin Costner film (you know the one). It's just bad. 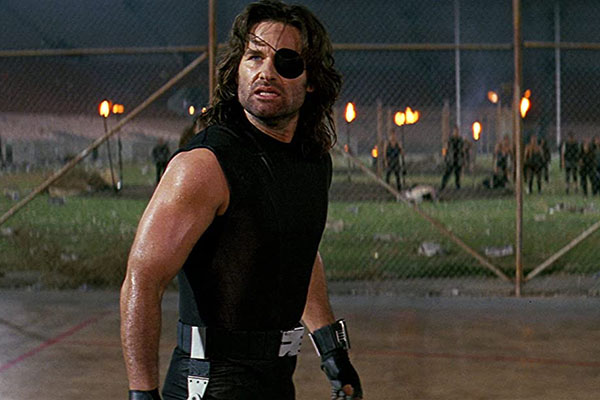 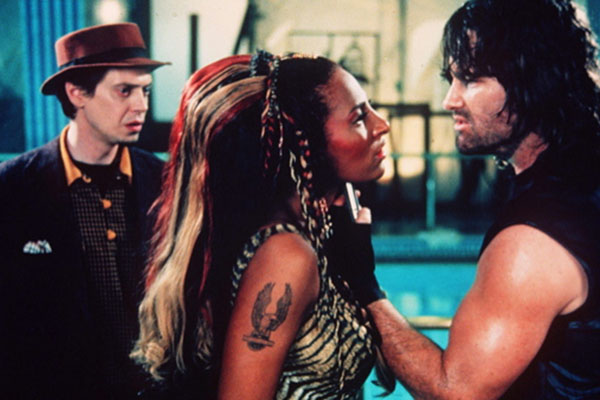 And then, right when you think it can't get any worse, right after it's had its "jump the shark" moment with Snake literally surfing his way through L.A. (in a short to badly designed it almost swings back around to being funny), the film manages to get even more offensively bad. Pam Grier comes in, and normally I love Pam Pam Grier, but she's cast as the trans character Hershe and I was simply appalled. It's amazing how quickly a character like this went from a Hollywood trope (let's reach under their dress to feel their dick) to the mark of a regressive and awful movie. This character, with her obvious fake deep voice, is the butt of the jokes in her scenes and you just feel bad for her, for Pam, and for everyone that had to sit here and film this, let alone everyone in the audience watching it. We've (hopefully) moved on from ever having this kind of character in our films again, a trans character who is there to be funny because "oh, she's actually a dude so lets mock her." Ugh.

Seriously, by the end of this film I was simply drained. It's an awful, unfun, regressive, stupid, and poorly made movie. The fact that Paramount was willing throw $50 Million away on the movie absolutely boggles my mind. They should have seen the first day of dailies and said, "nope, scrap this shit, we'd be better off spending the rest of this money of cocaine." It's a movie so bad it sank the burgeoning franchise, killing the potential Escape from Earth Carpenter and Russell were trying to make and forcing Carpenter to rewrite Escape from Mars as Ghosts of Mars (which was also a terrible movie, I should note). After seeing this movie again, I have to agree: we really don't need any more adventures in the Escape From... series, not if they're going to be this bad.

Now, having written about this film for the site, let's all hope I never have to watch Escape from L.A. again. Ever.