Looping In and Around Itself

Back to the Future Part II 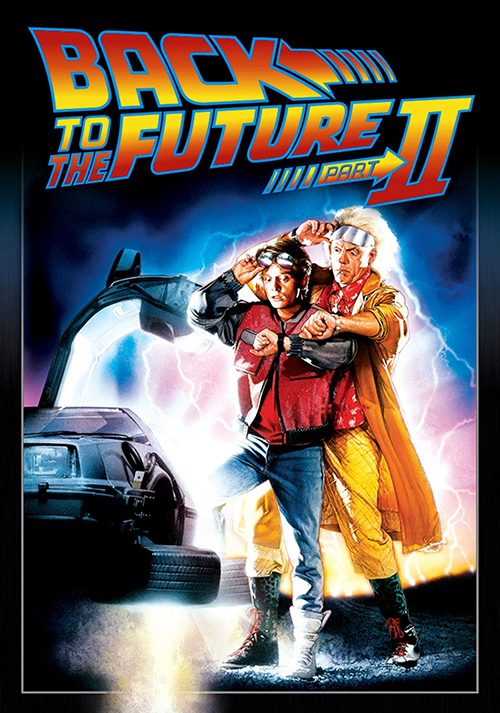 In part that was because of the breeze, laid-back vibe of Bill and Ted, with its cool music and even more enjoyable story. But there was also a major flaw with Back to the Future Part II: it's absolutely obsessed with Back to the Future, to the point where it barely tells its own story. It spends a lot of time replaying sequences from the first movie over, sometimes in the future, sometimes in the present, sometimes from a new angle in the past, but it very rarely has anything new to say on the matter. It basically says, "hey, you love the first one so much, let's just go back and watch it again!" It really holds the film back.

Part II picks up right where the first movie ended: with Doc Brown (Christopher Lloyd) coming back from the future to take Marty (Michael J. Fox) and his girlfriend, Jennifer (now played by Elizabeth Shue), to the future so they can help him prevent some event that ruins the lives of their future selves and their kids. But while there, preventing disaster, Marty gets the idea to pick up a sports almanac that tracks all the winning games across 50 years (1950 to 2000) and use it to make a little money in the past. Doc freaks and throws away the almanac -- "this machine wasn't built for profit" -- but the elder Biff Tannen (Thomas F. Wilson) overhears, realizes they have a time machine, and briefly borrows it so he can hand the almanac back to his younger self.

Once Marty and Doc (with a passed out Jennifer, who fell unconscious after coming face to face with her future self) return to the present, they're in for quite the shock: the present is no longer the one they're familiar with but, instead, one where Biff became rich and famous and twisted the world around his screwed up image. Marty's father, George, is dead, his mother Lorraine is married to Biff, and all of Hill Valley has basically become a bike war zone. Realizing what's happened, Marty and Doc have to travel back to the past to stop Biff's evil plans and set the world right once more.

In some regards I like what the second movie does. I think it's fun to have the characters go to the future, to have an adventure outside of 1985/1955 and to explore some goofy possibilities for what the future could look like. Certainly back in 1989 (when the film came out) the future of 26 years later laid out by the movie seemed cool. Sure, very little of it actually happened the way it's depicted in the movie -- there's no hover cars, no hoverboards, no Jaws 19, no robots coming out at gas stations to give vehicles the full-service treatment, while the most prescient thing is the 1980s style bar that feels spot-on for tourist traps now -- but it's all fun and silly, especially viewed through a lens of 2020, which I think was the point. 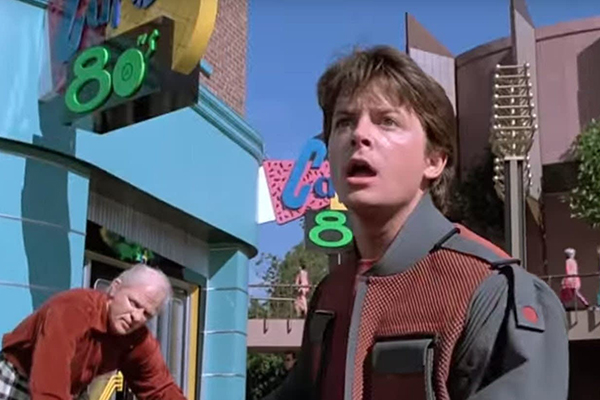 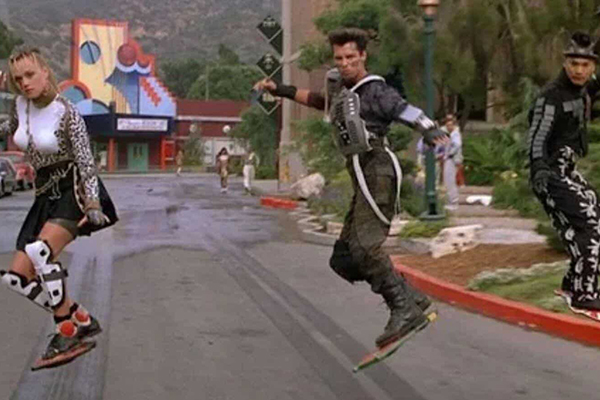 And the sequences in 1955 where we see the characters going about business that doesn't directly tie into the events around town or at the Enchantment Under the Sea Dance, work really well. Marty and Doc stalking Biff, learning about Biff's life (and see him being a real tool), and then the late-movie chase where Marty has to get the magazine off Biff so it can be burned, are all solid pieces. The crew had some good ideas, and even the sequences stitching into the original film are at least well made. Credit where it's due.

At the same time, I wish the film wasn't so beholden to the original movie. The main sequence of the future section involves Marty stepping in for his son (also played by Michael J. Fox) to tell Griff Tannen (also played by Thomas F. Wilson) to shove it, that he wasn't taking part in whatever scheme Griff had cooked up (that eventually gets Marty Jr. thrown in jail days later). This leads to a chases around the downtown section of future Hill Valley, on hoverboards, that plays almost exactly like the chase in the square in 1955 on a skateboard. Biff even comments, "this all seems to familiar".

Then, for most of the 1955 sequence, Marty is going in and around the dance again, watching events we saw in the first movie as an outsider, then inserting him into sequences. This was fun the first time I watched it back in 1989, but now, when I go to see the movies all in a row, I just wish the film could have done more in 1955 outside these bits. It all feels so tired because, as a trilogy, we just saw it all in the previous movie. It's not as engaging as it should be, and doesn't hold up to the ravages of time and audience expectations.

But the worst part of this film (which then carries into Part III) is Marty's sudden macho-man obsession with no one calling him chicken. Although Marty was willing to stand up to bullies in the first film he never showed a reckless need to prove his bravery. But this second film inserts, very specifically, that Marty is obsessed with the fact that no one is allowed to call him "chicken". It's like the producers realized Marty needed some kind of character growth across this film, and its sequel, so they shoehorned in something that really made no sense for the character just to give him a plot. 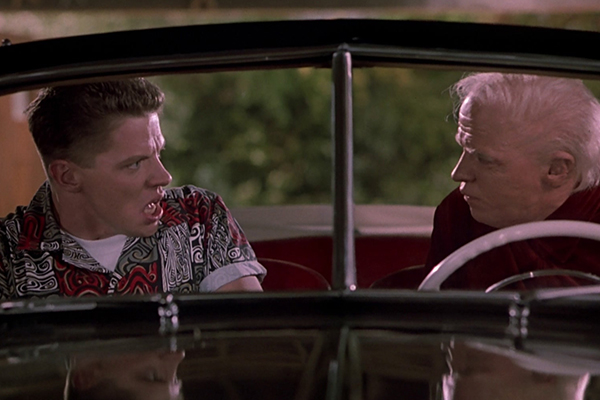 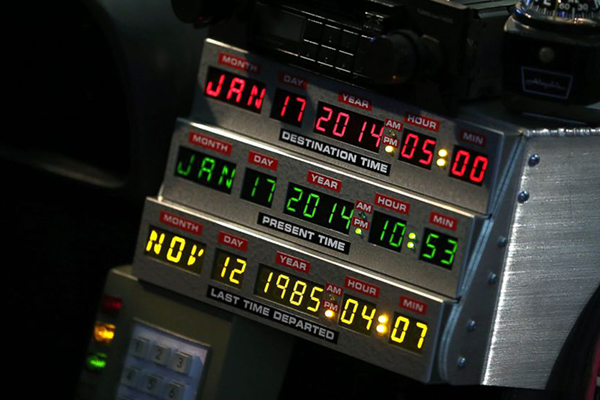 It felt a little weird and out of character back in 1989, and never really resolves itself or feel natural all these years later. The kind of character that would get so up in arms about being called "chicken" doesn't align with the Marty we saw in the first film. It's some other guy, someone more like Biff than the kid raised by George and Lorraine. The only thing I can think is that this Marty we're now watching is actually from a new timeline, the timeline where he's always been upper-middle class, always known his dad to be a successful writer, and has always known the mall downtown as the "Lone Pine Mall". That would explain why he acts differently (and also why Jennifer looks so different -- Marty's changes in the past actually made for a different Jennifer in the present).

Whatever the case, it makes Back to the Future Part II into a weaker sequel than it could have been. In all regards the film is in love with itself, with the marvel of the first movie and how it can recreate and obsess over its own details. It doesn't tell its own story so much as an expansion pack of the original, a new way to view what came before without really elaborating on it. And it doesn't even tell a fully complete story because we still have a direct sequel to follow up. Marty is stuck in the past, Doc is gone, thrown back to the Old West, and 1955 Doc has to help Marty get home... in the third film. We still have one more adventure to go, and we'll see if it's better, after all these years, than Part II. Right now this feels like the weakest entry in the series, but maybe we'll see differently when Marty takes an adventure to Hill Valley of the Old West...