Be Excellent to Each Other

I suppose it's a bit of a stretch to cover Bill and Ted's Excellent Adventure for Sci-Fi Saga September as this film is about as un-Sci-Fi as you can get. It's a silly movie with a silly premise -- two slacker dude are destined to write a song that brings peace to the universe, but first they have to survive high school, and so they time travel -- but there's a certain timeless quality to the film with a message of hope for humanity that seems just as comforting and attainable as the utopia depicted in Star TrekOriginally conceived as "Wagon Train in Space", Star Trek was released during the height of the Hollywood Western film and TV boom. While the concept CBS originally asked for had a western vibe, it was the smart, intellectual stories set in a future utopia of science and exploration that proved vital to the series' long impact on popular culture.. Plus it has time travel! 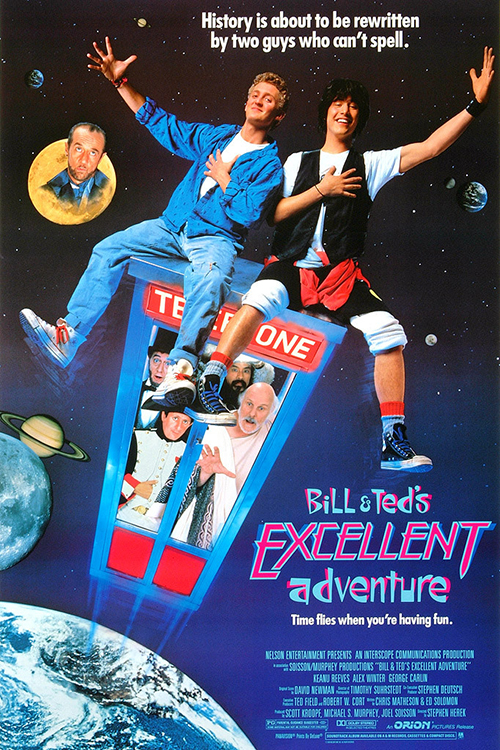 Of course, talking about Bill and Ted is more relevant now that a third (and long awaited by 25 years) film has arrived in the series, Bill and Ted Face the Music. If we're going to discuss that movie we have to go back to where it all begin, and this slacker film with low ambitions and a low budget that just so happened to become a big hit. No one expected this first film to be as solidly entertaining as it was, but that low bar only helped this fun, breezy little romp become the exact film it needed to be. Bill and Ted might not aspire to be more than two cool rockers, and the film keeps its own expectations low in the best possible ways.

Bill [S. Preston, Esq.] (Alex Winter) and Ted ["Theodore" Logan] (Keanu Reeves) are the two titular slackers, loser wanna-be rock stars who do nothing more than hang out in Bill's garage making, as they put it, a "triumphant video" that will launch their rock star aspirations. Of course, the fact that they have crappy instruments, don't know how to play, and have a criminal lack of Eddie Van Halen in their band is clearly holding them back. Also, there's the fact that they never go to school and even when they show up they barely retain anything they're taught. Destined to flunk out of school if they don't get an A+ on their final history project, their band, Wyld Stallyns, could be over before it even stars as Ted's dad (Hal Landon Jr.) threatens to send him to military school in Alaska the second he flunks out.

Fate, though, intervenes in the form of Rufus (George Carlin), a time traveler from the future specifically sent to save the band and keep Wyld Stallyns together. Since they have to write a history report, Rufus gives them a way to travel through time -- a telephone booth that travels the "circuits of time" -- so they can travel around and get the information they need to write their report. But, after the two dudes accidentally kidnap Napoleon Bonaparte (Terry Camilleri), they get the best idea possible: the grab a bunch of historical figures and make them help them with their report. All they have to do is wrangle all these folks into helping and then get them to the presentation in time.

Let's face it, the stakes in this film aren't exactly high. Yes, the movie makes us care about whether these slackers are successful in their report by telling us they'll achieve world peace, yada yada, but that's such a big thing we don't really grasp it. Plus, even the film understand that's its silly to think these two idiots would write a song that could create a perfect utopia -- they're dumb, rock 'n roll guys, endearing to be sure, but no world leaders. 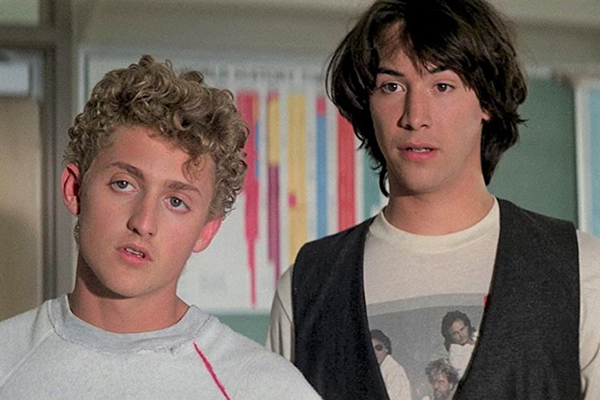 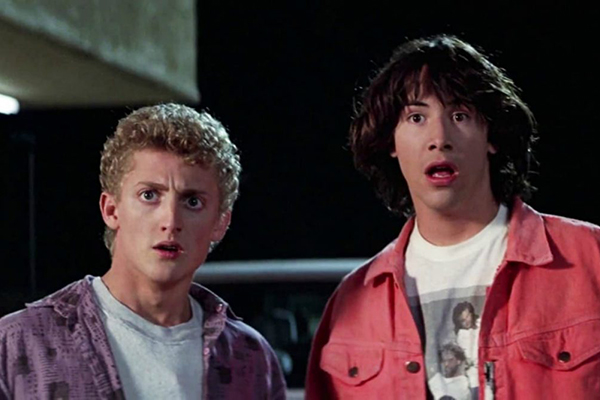 Of course, that's the charm of the film. These two losers are kind-hearted souls who just want to have fun without getting in anyone's way. If this were a different film they'd have some bully chasing them, making their lives hell, or there's be some evil time travel organization set to stop their every movie, trying to kill them at every turn (you know, as in the frankly inferior sequel). But here, all the guys have to do is go on a bit of a time travel adventure, get home, and put together a killer presentation. It's a threadbare plot, more a series of skits tied together with the loosest of stories, but it works so well, running off the easygoing energy of the leads.

In that regard the film is perfect. With Winter and Reeves in the lead, the movie has its perfect duo to embody the slacker-rock characters of Bill and Ted and make them into the lovable buffoons they need to be. The two actors play their characters with such charm, embodying their "hey, why not" attitude while keeping they likable. It's a hang out movie, through and through, a party guided by these two masters of rock, and it works well because they keep the party light, happy, and fizzy the whole way through.

Really, everyone in the cast seems to be having such a grand time. Winter and Reeves guide the show, but everyone else invest in the film as well, making it a perfect concoction. Carlin, who was known for his aggressive comedy, plays a gentler version of himself, the only character allowed to break the fourth wall and address the audience (not unlike his stand-up in that regard). Meanwhile we have all the historical figures -- Camilleri's Napoleon Bonaparte along with Dan Shor as Billy the Kid, Tony Steedman as Socrates, Rod Loomis as Sigmund Freud, Al Leong as Genghis Khan, Jane Wiedlin as Joan of Arc, Robert V. Barron as Abraham Lincoln, Clifford David as Ludwig van Beethoven -- and while none of them really act in accordance with their characters (the closes is Leong beating the shit out of a sporting goods store as the "barbarian" Kahn), they all have such fun it's hard to hate the anachronism of their performances.

The only "sour" note is, in fact, intentional: Ted's dad. He's a jerk to his son, being way too stern and overbearing for his kid. Of course, once you watch the film a couple of times you realize the character is just being hard on Ted because wanted his son to succeed (a fact the sequels missed, just making him into an overbearing jerk). Ted's dad is as close to a "villain" as the film gets, but even then its couched within the easygoing terms of the film. He's mean because he cares, and his sternness and desire to make his son into someone that can succeed is what gives the film its drive and purpose. As a stand alone adventure, Ted proves to his dad, in the end, that he can success on his own terms. You know, as long as he has a time traveling phone booth, at least. 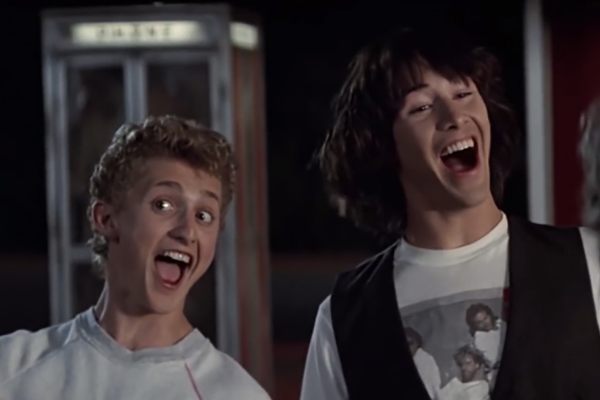 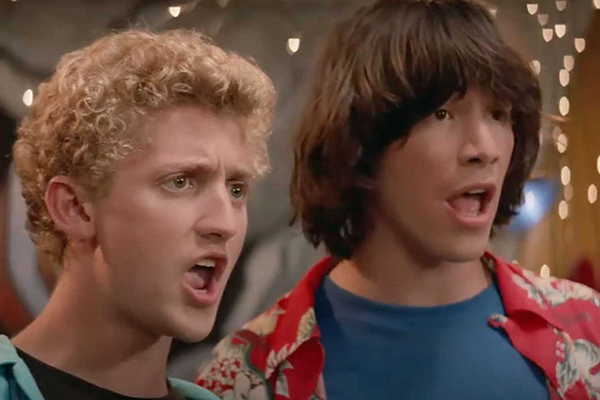 Bill doesn't have the same kind of character growth as Ted, his father not being anywhere near the presence in the film as Ted's. In fact, it's fair to say that because these two bros are joined at the hip, always hanging out together, Ted's character growth is really Bill's character growth, too. They both live or die by what happens to the other person, and when one of them succeeds they both succeed. Still, some kind of plot line for Bill could have given him a little more depth instead of just making him "Ted, but by a different name."

It's a minor quibble, of course, as this film manages to nail everything just about right. Hell, even the soundtrack, aged as it is for 1989 film, still kicks -- this is probably the best collection of hair metal bands you never heard of before, and it's solidly rocking. For a film all about the musical aspirations of its two leads, the producers clearly knew that the music of the film has to be as good as the music the band was destined to write.

It's fair to say that the sequels haven't quite managed to recapture this perfect magic. As we'll see next time when we cover Bogus Journey, that film has good intentions but missed the mark completely. Meanwhile, early reviews peg Face the Music as a solid entry but still not quite up to the standards of the original. And maybe they don't have to measure up, as this film itself is a delightfully self-contained story that gives us two slacker dudes we can always enjoy and sends them on a low-stakes time travel jaunt for the ages. Time and again it's easy to come back to Excellent Adventure because it's just that: an excellent adventure for any year and any mood you might be. Let Bill and Ted lift you up with their lighthearted, good intentioned charm and comedy.