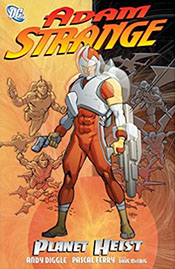 Adam Strange, the DC Silver Age space traveler, appears in his own solo miniseries for the first time in almost forty years. Strange is an adventuring archeologist by trade, who by sheer coincidence was teleported to another planet, called Rann, by the Zeta Beam. Quickly becoming the "Hero of Rann," Strange slowly settled into his new home - even marrying a local woman and having a daughter. However, because the Zeta Beam is unstable, he was often transported back to Earth (always after he saves the people of Rann from various space threats). One fateful day he is not teleported back.

Planet Heist begins with a depressed and alcoholic Adam Strange trying to convince the police that he is a superhero and through interrogation tells his fantastic back-story. While awaiting the Zeta Beam, which never reappeared, Strange asks Superman to make sure Rann is safe. After exploring Rann, Superman comes to Strange and explains to him that Rann's sun went supernova, essentially destroying the entire Rannian solar system. There were, obviously, no survivors. Hearing the news that his entire family is dead sends Adam Strange into a downward spiral. Luckily for Adam Strange, there is a slight glimmer of hope ... Strange learns, through two intergalactic bounty hunters, that Rann may still exist. Not having anything left for him on Earth, Strange flies off into space ... beginning his search for his family and the lost planet that he held so dear.

During his epic space travel, Strange runs into a number of classic and underused characters in the DC Universe, including: The Omega Men, Thanagarians, and Drax of L.E.G.I.O.N. Through his intergalactic travels, Strange eventually has a run in with an armada of space ships and is taken aboard as a guest of honor. While staying as an elite guest aboard the armada, Strange learns that Rann was not destroyed, but moved in order to trick him. Who would do something like this, and are the good-intentions of the space armada too good to be true?

While the plot is relatively simple and straight forward, it is none the less enjoyable. I found myself deeply interested in what Earth-shattering (or should it be Rann-shattering?), cataclysmic event would befall Adam Strange. However, while the dialogue between characters does not have the stereotypical sci-fi cheese, it did feel a bit strained at times. Every so often I found myself thinking, "no one would say that," but the few lines of unnecessary dialogue did not detract from the overall story.

The pencils are masterfully done; it's a shame that Ferry does not do more artwork. His work, without question, is great and fits this book perfectly. The modernized versions of classic characters, such as the Omega Men, are intelligently designed and look much better than previous renditions of the old, underused characters. Ferry's line art, while visually stunning, draws the reader into the story making everything seem much more lifelike and real.

While the pencils were incredible, the coloring didn't fit the story very well. The colors were much too vibrant for a space story, and at times they actually distract the reader. Space dramas, as far as I'm concerned, are supposed to use colors that add a bit of mystery to the character. While beautiful, Dave McCaig's work simply took attention away from the story. While the palette did not fit the story, there were a few redeeming qualities about it. For example, the colors used for the various alien life scattered throughout the book were spectacular; unfortunately those few scenes did not completely make up for the fact that the coloring did not fit the book.

With Diggle's fluid writing, Ferry's superb artwork, and the overarching plot being nothing less than interesting, Adam Strange: Planet Heist is a must for anyone that enjoys science fiction or would like to read a nice pseudo-romantic drama.