Scary Stories to Tell in the Dark

As a child of the 1980s, as well as child who was very interested in horror (films, stories, and whatever else I could find), the Scary Stories to Tell in the Dark series was a perfect fit for my tastes. As with so many kids of the era, we were bombarded by the Scholastic Books mailers, and when those catalogs advertised books, the horror anthology books were too attractive not to get them. "Horror stories approved for kids? Sign me up." And, to their credit, there were a number of chilling tales in the three books, some pretty good stories to tell round the campfire (or creep you out while you're reading them late at night). 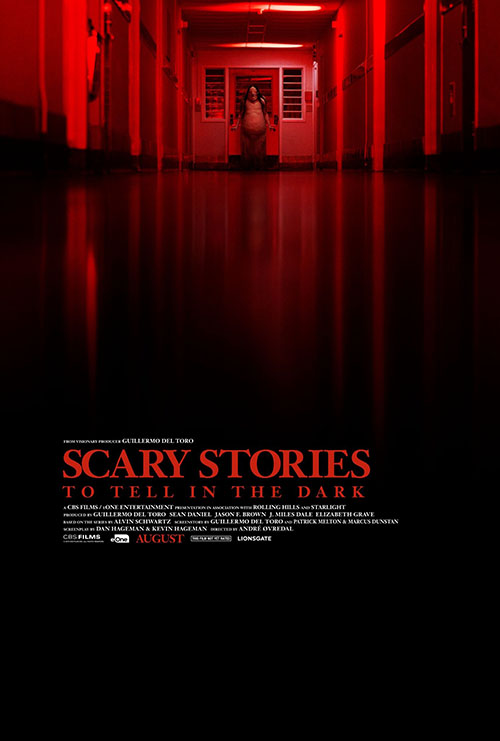 There's a certain amount of nostalgia for the books tied to Gen-X and Gen-Y readers, anthologies of horror that came out every couple of years for a decade there, a bit of horror from when we were growing up. It's a natural fit, then, for Hollywood to want to make a movie based on these collections, to tap into that nostalgia as parents shared the stories that scared them with their kids. A revival, in movie form, of Scary Stories to Tell in the Dark should have been an absolute winner. Somehow, though, this film is not that winner.

Set in 1968 (a curious choice for an adaptation of books written and released in the 1980s) we pick up with a group of three friends -- Zoe Colletti as Stella Nicholls, Gabriel Rush as Auggie Hilderbrandt, and Austin Zajur as Chuck Steinberg -- as they plan a Halloween prank on a bully that's made their life hell, Tommy Milner (Austin Abrams). The find Tommy while he's driving around town, Chuck's sister Ruthie (Natalie Ganzhorn) in the passenger seat, throw eggs and toilet paper at his car, then throw a flaming bag of shit inside. In a rage, Tommy chases the kids to the drive-in where, to avoid him, the kids duck into a car owned by Ramon Morales (Michael Garza). After Ramon refuses to back down against Tommy, all four of them become quick friends, hanging out the rest of the night.

Their adventure takes them to the old Bellows Mansion where, years before, youngest daughter Sarah went crazy (so the tale goes) and killed a bunch of kids. The family locked her away and disowned her, scrubbing Sarah from their history. But, as the tales go, Sarah used to stay awake at night, locked in the basement, telling scary stories to anyone that would listen. The kids find Sarah's book and, when they open it, find that the book starts writing new stories... in blood. Soon, people around town start dying in the manner written in the stories, leading Stella and Ramon to realize that they have to find a way to put Sarah's ghost to rest before all of them are dead.

I have a number of issues with this film, all of which from from the second half, but I will credit the film with a solid and enjoyable opening act. The movie gets us quickly interested in the three kids and their prank using an artful montage set to the track "Season of the Witch", and this whole opening section, from prank to chase, to hanging out in the drive-in, as such energy. The world crafted here has a comfortable, lived-in feel, giving off similar vibes to It and Stranger Things. And, really, this film tucks in with those works as they all feature kids falling prey to supernatural horrors beyond their control. 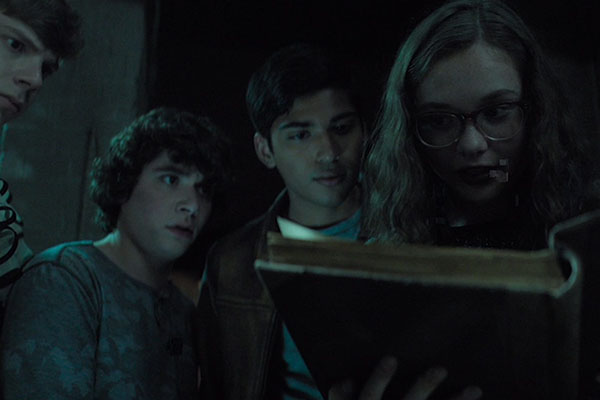 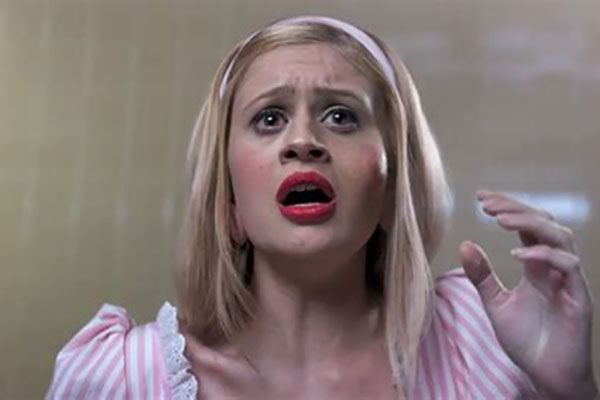 The fact that we had It and Stranger Things set in the 1980s may be part of the reason this film is, instead, set in the 1960s. Perhaps the writers, or the studio, might have felt that putting the film in the 1980s (when all the readers of the stories were born) would have felt like it was just copying those other works, but it does leave the film with a weird energy to it. It sets itself in a decade none of the people familiar with the stories have any appreciation for, plus at this point very few people are nostalgic for the 1960s. Yes, the Vietnam War is mentioned as a plot point for one of the characters (draft-dodging Ramon), but beyond that the decade the film is set in doesn't seem to matter to the film so I'm confused over this setting, honestly.

That confusion extends to so much of this film as the movie really doesn't seem to know what it wants to do. Does it want to be a truly scary film or just a strange fantasy adventure? The first act gets us the characters and the setup, and the first scary the book writes, about an evil scarecrow come to life, killing the school bully, works fairly well. That tale has some shocks, some scares, and effectively uses the setup and the medium of the film to tell a good horror tale.

From there, though, the film loses all style and momentum. We go to a tale about "The Big Toe" (which I recall being one of the funnier stories in the collections even though the movie plays it straight and, for some reason, uses it for a kill), and then a couple of stories I don't even remember from the anthologies. The justification for all the stories is that they play on the fears of the kids, nightmares they had that scare them... which doesn't actually explain the inclusion of "the Big Toe" which, near as we can tell, a tale of some kid eating a chili made with nasty, undead meat is not a nightmare he ever had, so there's an internal consistency problem here.

Additionally, the later "tales" just aren't scary. The tale of the Big Toe hardly has any thrills, but then we get Chuck hunted down by some creepy fat lady, and then Ramon is chased by a collection of body parts called the Jangly Man, and these stories fail on every level. The pacing for them is off, the creature effects are godawful, and the tales just half-heartedly end without any justification. The movie formlessly goes from one scary story to another without rhyme or reason, using the book-within-the-movie to justify whatever weird narrative turns it takes. 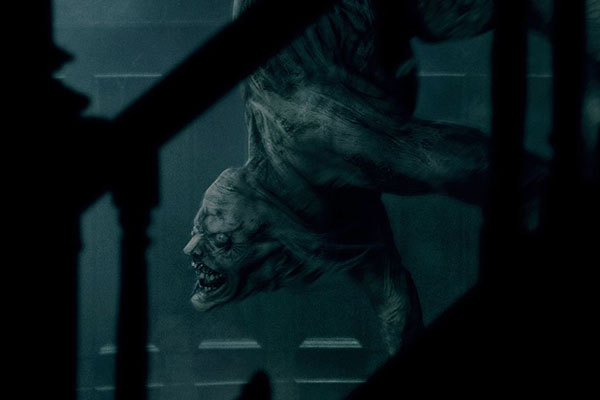 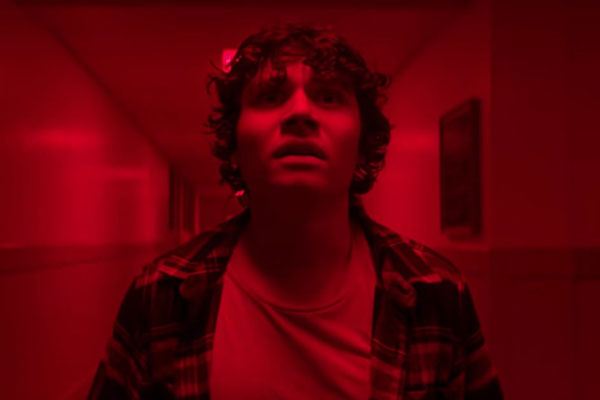 There is one tale that's actually gross and effective on a horror level, but it's also the one story that is an actual urban legend: the girl with a zit on her face that is actually a spot where a spider has laid her eggs. The movie manages the make this section creepy, horrifying, and artful, a really winner in the middle of the film. The only issue is that we've seen this story before, multiple times in other series and films (hell, we covered it recently in Urban Legends: Bloody Mary). It's a good horror story but it lacks the gut-punch it could have because it's also a famous story. There had to be other tales they could have shown instead without using this work.

To the film's credit, it is well directed. The actors all play their characters well, and the film gives them the time and space to find their footing and slowly explore their way through this story. It also has solid art direction, as you'd expect from producer Guillermo del Toro. There are really interesting effects done, sequences filmed in single colors, and a number of lingering shots at odd angles that up the creepiness of the film in that regard. This is a very artfully done film, well acted and solidly paced, that's betrayed by the script. The movie starts solidly but once the writers have to actually start working on the titular Scary Stories, that's when it all falls apart.

The film does deserve credit for not simply doing the usual short story anthology film most collections of this type would try for. It tries to integrate the stories into the main plot of the movie and come up with a justification for everything. But the film quickly loses its way and never gets it back, dumping all momentum on this dud of a tale. The original Scary Stories had three books in its series but this film fails to inspire the kinds of horror those books managed, such that I'd be amazed if it even warranted a single sequel. There are better horror movies out there than Scary Stories to Tell in the Dark so you may as well watch one of them. Or, better, go grab the original books and settle in with the original tales. They'll treat you better than this half-baked film.