Watching the evolution of the Evil Dead series is pretty interesting. This is set of films that started as a low-budget horror cheapie that then grew and defined its own genre -- splatstick. Each film has reinvented what to expect from the series, and Army of Darkness is no different. This is easily the lightest of the three films, investing its time less in horror than comedy, creating a film more akin to the Three Stooges than any of the horror films it used to mimic. 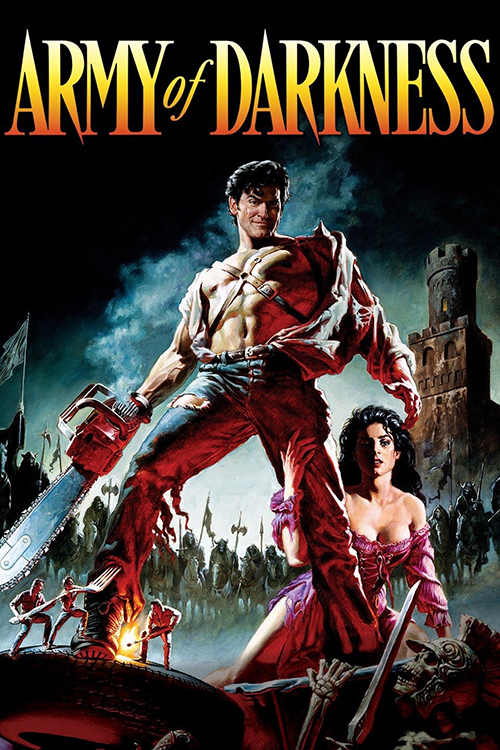 For those that watched the first sequel, Evil Dead II, this transition probably felt natural. The second film certainly invested more in the comedy half of the horror/comedy mix, having plenty of laugh-out-loud sequences. Of course, in that film the movie used the comedy to accent the horror, to keep the entire film off-kilter so that the horror landed harder. Here, though, the goal isn't to scare but, instead, tell a goofy fantasy epic with only a few moments of genuine horror mixed in. It's an odd and goofy movie but, within the context of its own story, it works really well.

As we saw at the end of the last film, Ash (Bruce Campbell) had been sucked into a vortex in an attempt to banish the demons that surrounded the cabin in the wood. When we last checked he'd been dumped into Medieval Times (the actual time period, not the restaurant, although the production values are pretty similar) and had been hailed as the hero that was destined to fall from the sky and stop the rise of the Deadites. Well, that was the last movie and, of course, these films love to reboot continuity between sessions. So now, instead of being the legendary hero, Ash is captured by Lord Arthur (Marcus Gilbert) on suspicion of being in league with Arthur's sworn enemy, Duke Henry the Red (Richard Grove), and sentences Ash to die in "the pit", the dumping ground where Arthur's men have dropped a couple of Deadites.

Of course, as we've already seen in the two previous films, Ash is surprisingly capable when it comes to killing these demons. He manages to survive the Deadites (with a little help from the town Wise Man, played by Ian Abercrombie) and climb out of the pit, and the villagers all start to realize he might just be their hero after all. Hell, even he buys into it, getting the biggest ego ever (hardly resembling the character from the previous two films), but while he likes the hero worship he just wants to go back home to his own time. The solution: the Necronomicon Ex Mortis, the book of the dead.

Yes, the evil tome that cause Ash so many issues last time around is, of course, here in the past as well. The book has a spell that can send Ash back, but the Deadites also want the tome. Ash has to battle is way through evil woods and a dark cemetery to recapture the book. In the process he fights tiny versions of himself (via the magic of a shattered mirror), accidentally give rise to an evil clone of himself, and then, because he fails to say the right words before collecting the book from its resting place, give rise to an entire Army of Darkness. He could just go home, but if he doesn't fight this army of the dead, who will? They don't make you king by being a coward. 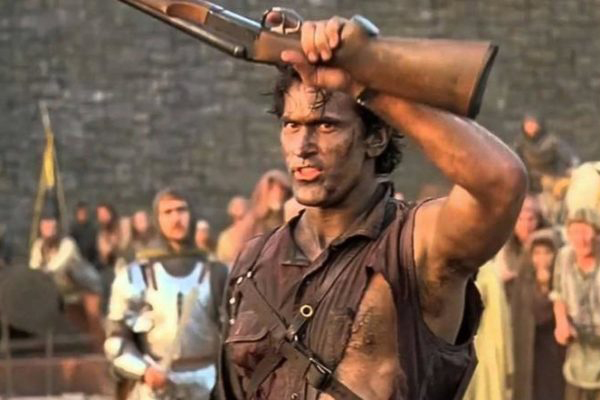 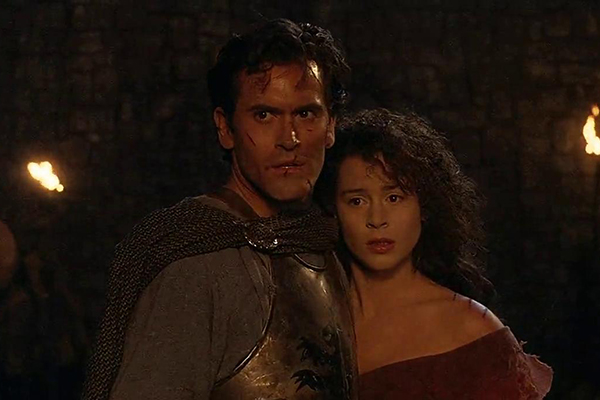 In comparison to the previous two movies, Army of Darkness is the most plot-intensive of the trio, although that isn't saying much. The first two films were basically "put teens at a cabin, and then kill them" with the thinnest explanation about why demons attack and possess the campers. Here, though, we get a story about Ash learning to be a hero (instead of just a coward), finding love, and fate, at the hands of the Deadites. It's not a overly complex story, mind you, as it basically amounts to Ash getting a girl in the first few minutes of the story (after being a total jerk to her), and then going on a quest for the book (which is a bunch of skits, really), before failing and having to fight the army of darkness (which is just a long action sequence). It's more story than we're used to, sure, but not exactly by much.

But then it really doesn't need much explanation. Any story we get is there to facilitate the skits, to get Bruce to the comedy so he can do his thing. Campbell, as we noted before, is a master of slapstick, willing and able to throw his body into any thing director Raimi asked of him. Here he gets to really put this skill to work for comedy, taking every pratfall, face punch, eye poke, and abusive hit and making it work for the humor. The comedy is silly, and constant, but Bruce sells it, letting Ash be a punching bag for all the abuse that comes his way.

I honestly think that's the reason why Ash went from being a hapless, but well-meaning, guy in the previous films to an overbearing, egotistical jerk here: it's easier to get behind him being kicked, punched, attacked by tiny clones, and generally abused by the world when he acts like a dick and brings it on himself. It certainly makes the comedy, and slapstick, feel more earned, like when Ash says the wrong words and accidentally summons the army of the dead, so then the arms of the dead rise up and slap and punch him for a few minutes -- if Ash had done it right, this level of abuse wouldn't work, but it's funny in context.

All of the film, really, is meant for humor. It has an easygoing adventure vibe that lets viewers slide into the action. The film waffles between high fantasy, swords and shield action and dumb-fun slapstick and quotable lines. There's a reason the lines "gimme some sugar" and "hail to the king" live on in the dumb, macho way most people use them: Ash said them, and they're so funny in context they've become part of our nerdy, pop-culture vocabulary. Hell, for my part I know I used "groovy" because Ash says it so well in this film (and in Evil Dead II, of course). Ash, dumb as he is, is instantly quotable. 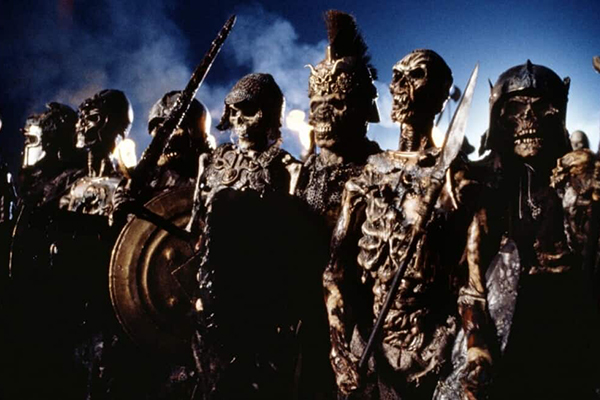 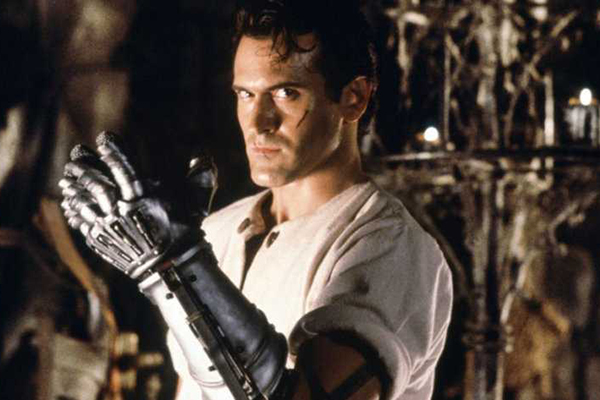 Those looking for horror, though, are probably left out in the cold by Army of Darkness. Although there are a couple of splatstick moments, such as when one guy is thrown into The Pit, and then the pit erupts in a gigantic, hilariously over-the-top gout of bright red blood. For the most part, though, this film is all about the comedy, punctuating every scene with a comedic moment, a one-liner, a silly sound effect, all to carry forth that Three Stooges vibe. This isn't horror by way of vaudeville comedy, it's fantasy adventure by way of 1950s comedy classics. Any connection to the horror films of the series is purely coincidental setup.

Really, fact is that this film as a lot more in common with other Renaissance Pictures works (the production company lead by Raimi, Tapert, and Campbell that made all these films): Hercules: The Legendary Journeys and it's spin-offs and like-minded ilk. This is a fantasy adventure one step away from swords-and-sandals epic, with the same kind of tongue-in-cheek humor and slapstick violence that made these TV shows syndicated hits. They aren't good, and in most respects Army of Darkness wouldn't be considered a good film. It's dumb, and silly, and fun, but it's not really "good".

And I have to fact facts: of the years this film just hasn't aged that well. Viewed in a series, this film lacks the energy of the previous films, that sly bit of humor that made the comedy cutting. It trades all that for slapstick humor and a dumb lead hero, which are funny sure, but it loses the gusto the previous films had. This is a weaker entry, made even worse by gender politics that haven't aged well -- the lead female, played by Embeth Davidtz, is negged into loving Ash and then simply becomes a prize for Good and Evil Ash to war over, even "turning" to the side of evil after Evil Ash rapes her. Yikes.

At this point I think I really prefer the first two Evil Dead films. This film is fun for a lark once in a while, but it doesn't hold up by comparison. At best it serves as a bridge to the TV series to come, Ash vs. Evil Dead, a show that finds that raw and evil splatsick energy this film lacked. We have to know where Ash went to understand where he ends up next, but on its own, Army of Darkness is too slight, too silly to really hold up against the test of time.