Fool Death Once, Shame on Death...

We've gone over a number of horror movies on this site, from the likes of Child's PlayAlthough some might have thought that the idea of a killer doller slasheer flick couldnt' support a multi-decade spanning franchise, Chucky certainly proved them wrong, constantly reinventing his series, Child's Play to stay fresh and interesting three decades later. to HalloweenThe franchise that both set the standard for Slasher horror and, at the same time, defied every convention it created, Halloween has seen multiple time lines and reboots in its history, but one thing has remained: Michael Myers, the Shape that stalks Haddonfield. and Nightmare on Elm StreetThe brain-child of director Wes Craven, A Nightmare on Elm Street was his answer to the glut of Slasher films that were populating the multiplex. His movie featured an immortal character, Freedy, with a powerset like none other, reshaping the expectations for Slasher movies to come., but those movies all share a common thread: a killer stalking young people for the jollies of killing them (one way or another). Slasher movies, and even other films that dip their toes in that genre, all find some way to involve a (increasingly immortal) lead killer to do the dirty work and entertain the fans. 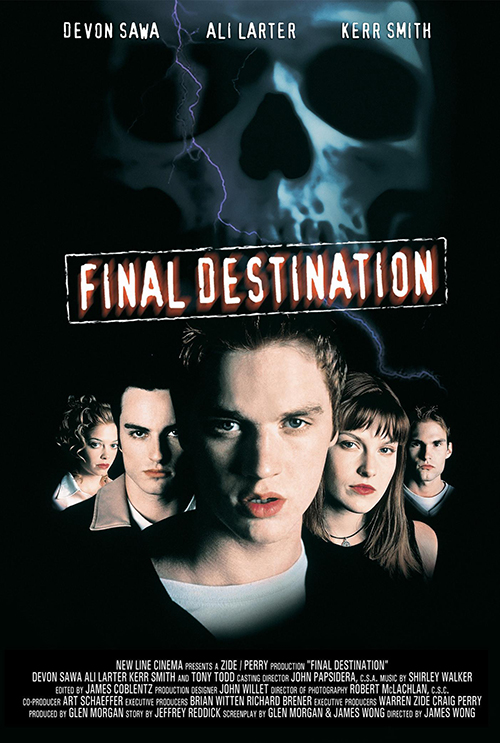 Of all the Slasher films I've seen, though, only one makes the actual killer a force of nature itself: Death. Although never directly seen, the cruel and malicious hand of Death comes for every kid in this film (and all the ones to follow), setting up an elaborate domino effect for each kill. The tension, and elaborate, almost Rube Goldberg-esque machinations, are the driving force of the Final Destination series, the raison d'etre, if you will, and it's certainly the most memorable thing about this movie and the films to come.

That said, what this film, the original 2000 Final Destination, has over all the sequels to follow was an earnestness to the story, a tale of trying to cheat Death and find a way to actually live. Powered by a likable cast of actors, this film managed to nail all the right beats and craft a fairly enjoyable, Slasher-adjacent tale. It's something this film nails perfectly while everything to come after in the series falls so very far from the mark.

The film focuses on Alex Browning (Devon Sawa), one of five kids (and one teacher) who get yanked off a plane ride to France. They were all venturing on a class trip to enjoy the sights (and sounds) of France (we assume as some kind of foreign language class), but when Alex has a dream (or a vision, or whatever you want to call it) on the plane before it takes off -- that of the plane exploding horribly in mid-air -- he freaks out and bails, and everyone in the aisle with him also gets ejected. And then, while they sit in the terminal, the plane explodes as it takes off.

Freaked out, everyone wonders what it was that Alex really knew. Meanwhile, one by one, each of the people that left the plane -- best friend Tod (Chad E. Donella), jock dick Carter Horton (Kerr Smith) and his girlfriend Terry (Amanda Detmer), weird nerd (and eternal Stiffler) Billy (Seann William Scott), quiet artist Clear (Ali Larter), and teacher Mrs. Lewton (Kristen Cloke) -- start getting picked off one by one, all in seeming accidents (although it's clear there's an invisible, guiding force causing the deaths). Everyone starts to blame Alex, including the FBI, but Alex is just trying to figure out what Death's plan is so he can save as many of the survivors as possible before everyone ends up dead. 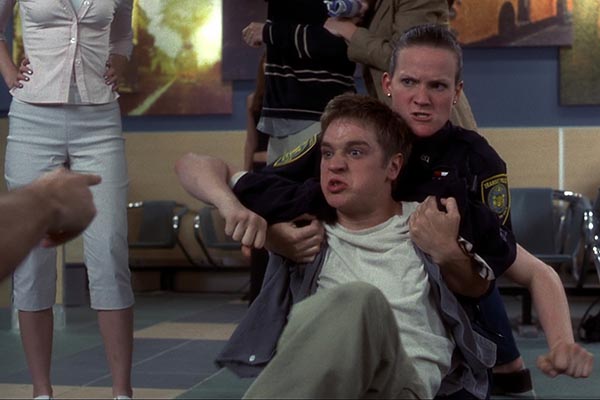 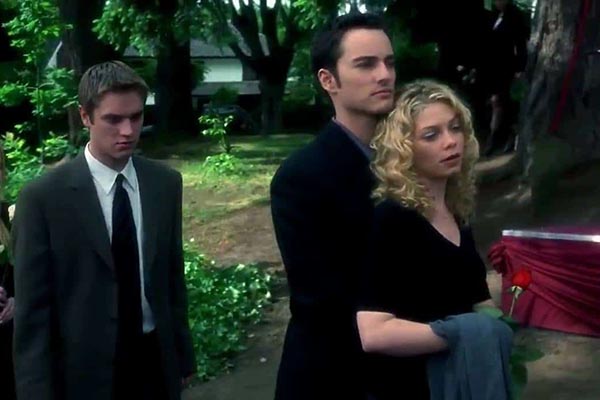 This film does a lot of things right, all of it adding up to a movie that's vastly more enjoyable than it really should be. Coming out during the 1990s/2000s Slasher renaissance, this film eschews the meta-style storytelling that marked some of the bigger entries (Scream and Urban Legend included), instead going for a very different hook: what if the killer were Death itself. Now, as we alluded to above, this isn't the traditional cloaked Death with a scythe but an invisible force, giving the setup of the film a very different feel despite the fact that it is, at its core, a Slasher film. Kids are setup, given vague personalities, then die, as you expect them to do in any Slasher film.

Part of why this film works as well as it does, though, is due to its game cast of characters. Led by Sawa (who had some success in the late 1990s in other weird horror films as well, such as the enjoyable horror-comedy Idle Hands), the cast are all game and charismatic, delivering performances that flesh out their thinly drawn characters. Sawa's Alex, as the lead, of course gets the meatiest role, the guy that has to figure out "Death's Plan" and work to stop all of the killings, and I have to say I like him better here than I think I have in any of the works I've seen from him.

Credit is due to Ali Larter, Kerr Smith, and Sean William "Stiffler" Scott for taking their roles and making something more out of them. Each of these characters -- Larter's cool girl Clear, Smith's dickish Carter, Scott's nerdy Billy -- are barely filled in characters on the page. Clear does art and doesn't talk much, Carter is a dickish, agro jock, and Billy is, well, just Sean William Scott, but the actors make them engaging and interesting. Without this specific cast these thin characters would be tedious to watch, as evidenced by the lackluster casts in the follow up films being unable to sell their similarly thinly-sketched characters.

Of course, as in any Slasher flick, what we're really here for are the kills, and some of them are pretty damn good. The film wisely balances between big, surprising, shocking moments (such as the deaths of Terry and Billy), against long, drawn out, tense cat-and-mouse games between the chosen victim and Death. Sometimes these can happen one after the other -- Billy's death is all the more shocking because it happens right after Carter was saved, in the moment when you feel safe. The movie plays with expectations and keep the audience guess, heightening the horror. It's so well done. 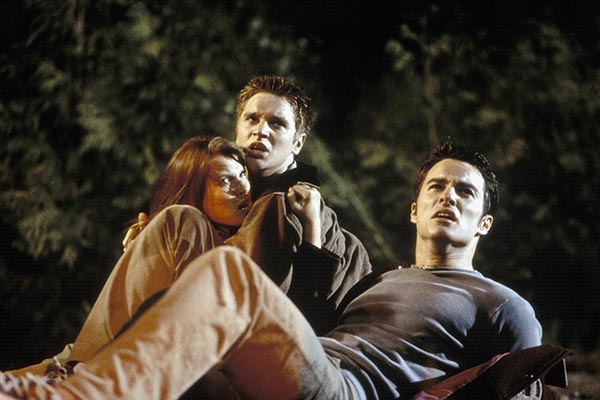 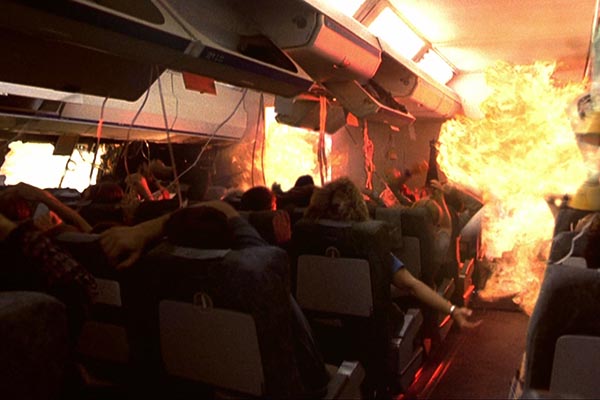 Of course, a couple of the elaborate kills are really solid. Tod's death in his own bathroom, while not gruesome, is sad and chilling, a tragic way for the kid to fall into Death's grasp. Meanwhile, Mrs. Lewton gets toyed with by Death, having one nasty thing after another happen to her as if Death is saying, "I am going to make sure she stays dead.". It's rough, but also almost comical in the way it plays out, like a series of vile dominoes falling one after another to make the biggest, goriest pattern. These are the moments people really remember from the film, and its these kinds of kills that become a trademark of the franchise.

But then, that's what this film gets well and the mark the rest of them miss: it's the blend of enjoyable characters sometimes dying slowly, other times shocking quick, that really sets the balance of the film. This movie is engineered just so, made to shock and delight. It's a one-off that has the right balance of death and hope, but once you realize that Death is never done, that there will always be another tragic accident with a few survivors Death has to go back to mop up, then you realize no one ever really gets to live. It's hard to care in the sequels because the hope is gone. Then it's just watching another set of characters get bumped off one by one until the film pulls the rug out and annihilates the rest, and that's just not as much fun. This film, on its own, is fun, shocking and tense in equal measure.

No film gets to remain on its own if its successful enough, but maybe, in this case, Final Destination should have remained a single film. Better that than blunting its impact with all the needless sequels.

There really isn't a proper sin that sets these movies off. Essentially the "sin" is dodging Death's game and surviving longer than you should. Not exactly fair, to be sure.

Alex's best friend, Tod, is in the bathroom getting ready for bed. After using the toilet, the pipe on said toilet starts to leak, dribbling water on the floor. This water then slowly creeps after Tod as the kid goes around, cutting his nose hairs with a tiny pair of scissors before heading off to take a shower. It's at this moment that he skids in the water, careening into a curtain wire across the shower. This then wraps around his neck, tightly strangling him as he falls into the tub. As he fights to get out, he knocks over shampoo bottles, making the surface of the tubs slick, causing him to stay stuck in the tub. Although he tries to reach the scissors to cut himself free, he strangles to death before reaching them.

Ignoring the plane explosion that kicks off the film -- that's not a body count I even want to track and calculate -- we have four. Tod is the first to go, followed by Terry (hit by a bus), Ms. Lewton (slashed, stabbed, and exploded), and after skipping Carter (per the rules), Billy (Stiffler) gets it (beheaded).

And, yes, the count is higher if we include the victims on the plane (that probably adds 30 or so), and the ending implies Carter gets it after (although we cut away before we see it). Still, four is the accurate count by the strict rules of the visually confirmed body count.