The Chronicles of Narnia: Prince Caspian (2008)

The first film in the Disney/Walden collaboration for the Chronicles of Narnia, The Lion, the Witch, and the Wardrobe, was only moderately okay. It had its heart in the right place, that's for sure, but dude to overreach as well as a director not really up to the task of making the movie, the first Narnia film stumbled a bit out of the gate, at least when it came to creating a quality film. That didn't stop audiences from showing up, allowing the movie to recoup a cool three-quarters of a Billion at the Box Office. That's success right that (at least as long as we don't define it in Marvel Cinematic UniverseWhen it first began in 2008 with a little film called Iron Man no one suspected the empire that would follow. Superhero movies in the past, especially those not featuring either Batman or Superman, were usually terrible. And yet, Iron Man would lead to a long series of successful films, launching the most successful cinema brand in history: the Marvel Cinematic Universe. or Star WarsThe modern blockbuster: it's a concept so commonplace now we don't even think about the fact that before the end of the 1970s, this kind of movie -- huge spectacles, big action, massive budgets -- wasn't really made. That all changed, though, with Star Wars, a series of films that were big on spectacle (and even bigger on profits). A hero's journey set against a sci-fi backdrop, nothing like this series had ever really been done before, and then Hollywood was never the same. terms). There were six more books in the series so with success like that more movies had to get made. 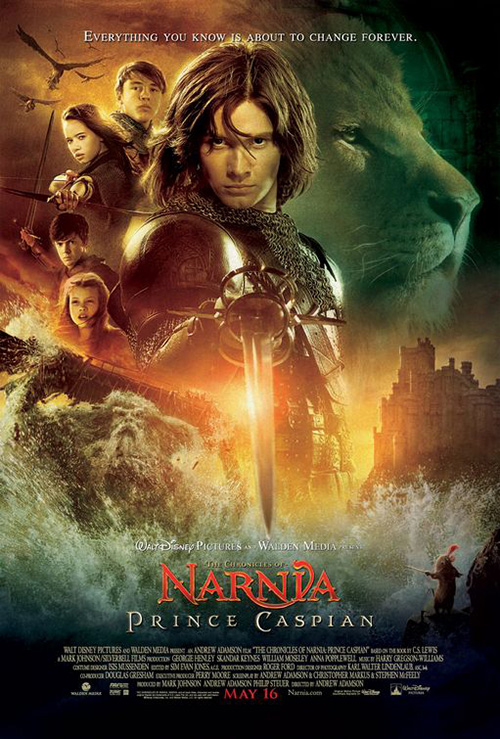 The problem for The Chronicles of Narnia was that the movies hadn't been filmed back to back. Disney and Walden Media took a wait-and-see approach with the films. When the first film succeeded the follow up still had to get approved and pushed into production. That led to a three year gap between the first film and it's sequel, Prince Caspian, and by the time it came out interest not only in future Narnia adventures, but in the whole high fantasy boom, had already waned. People were already moving on to the next big thing (and that thing was Iron Man). That's at least some explanation for why the second film in the series only made a little over half the returns at the Box Office as it's predecessor. Also, the first movie sucked so maybe audiences decided they didn't want a return tripe to Narnia.

It's a pity, too, because in all respects Prince Caspian is a greatly improved movie. From the acting to the cinematography, direction and special effects, this film learned from the mistakes of The Lion, the Witch, and the Wardrobe to create a solid adaptation. It is, quite honestly, a really enjoyable movie that deserved more attention when it came out in theaters.

After heading home at the end of the last movie, having spent a good twenty years or so in Narnia before returning and finding themselves as kids once more, the Pevensie children have found it hard to readapt to life back on Earth. They long for the adventure of Narnia, the sight of their friends and the magic of that realm. It comes as something of a relief, then, when the four kids -- Peter (William Moseley), Susan (Anna Popplewell), Edmund (Skandar Keynes), and Lucy (Georgie Henley) -- are all sucked back to Narnia one year after their fateful return. When they get there, though, they find a world quite different from the one they left, in no small part because it's suddenly 1,300 years in Narnia since the children ruled as kings and queen.

The reason Narnia sucked them back in is because, in the intervening centuries Narnia was invaded by the Telmarines, a race of humans who stumbled into Narnia from their own gate on Earth. Over the centuries the Telmarines claimed more and more of the Narnia land, leading to many skirmishes between humans and Narnians. The next Telmarine ruler, Prince Caspian (Ben Barnes), is a different kind of monarch, one that could rule his people fairly and would treat the Narnians with respect. Unfortunately his uncle, Miraz (Sergio Castelitto), has his own designed on the thrown and views Caspian as just an unfortunately stepping stone in his own quest for power. Caspian needs help to stay alive. Now the Pevensies will have to work with Caspian if they want to save Narnia and all the people within once again. 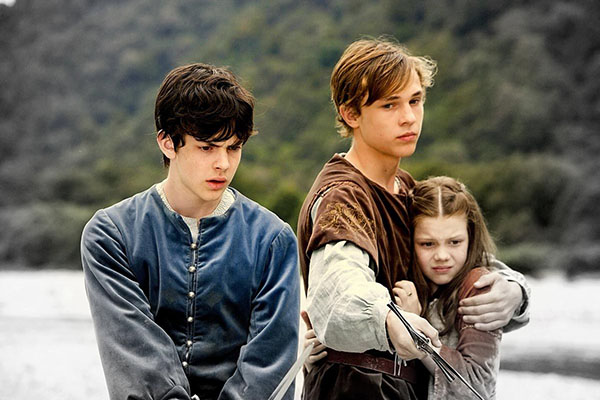 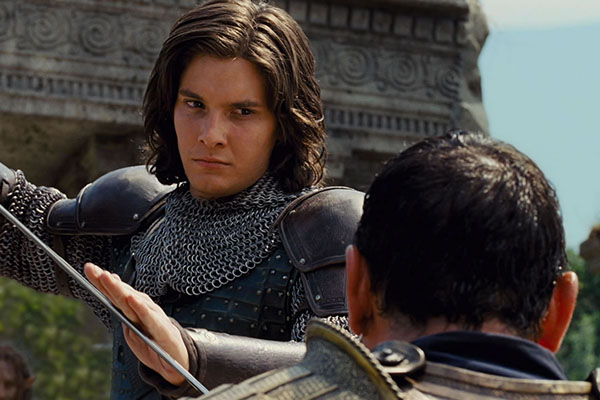 The first thing you'll notice upon starting up Prince Caspian is how much nicer this film looks in comparison to the first film. Lion, et al had the production values of a back-lot cheapie, this despite a $160 Mil budget and the resources of Disney at its disposal. And yet, with all those resources, the film looked like it was made in front of a green screen for most of its run, with occasional handfuls of fake snow thrown into the shots. Princes Caspian though, looks like it was largely filmed on location at a number of really nice locales. It had a real quality to it, depicting Narnia as if it were a real place (and not just a collection of digital backdrops in someone's computer).

That's not to say all the special effects are improved -- some of the CGI creatures still look pretty bad -- but over all the production learned its lesson and devoted more money to getting the special effects right and, like with the locations they filmed at, that meant doing a lot more stuff for real. There are plenty of creature effects that use real, practical effects, like guys stuffed into minotaur suits, which lends everything a more tactile feel. Lion, et al was a noble effort, but it's good to see Prince Caspian figure out what worked and what didn't and spend its extra money on a better class of production.

Credit also should be given to the actor who, across the board, have improved drastically since the first film. All of the kids (well, teens at this point) are much more comfortable in their roles, better able to take on the material and act like real people thrown into this world and not just wooden puppets moved around at the whims of an ill-equipped director. I think, once again, the practical effects help here; it's much easier to act across from a guy in a minotaur suit than it is to act across from a tennis ball set against a green screen that's supposed to represent a minotaur. Putting the resources towards practical effects has a beneficial influence across the board.

I'd argue that even the director, Andrew Adamson, is better able to handle the material this time around. This may also just be due to the fact that he's out in a real world, filming actual locations and practical effects. The director may simply have been lost in a world of green screens and digital effects, but whatever the case his filming here is more assured, more artful, with better direction and better input to the actors. In all respects this film is a drastic improvement over the previous entry in the series. 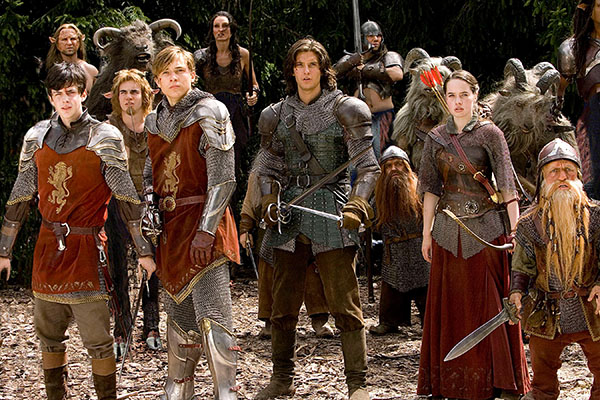 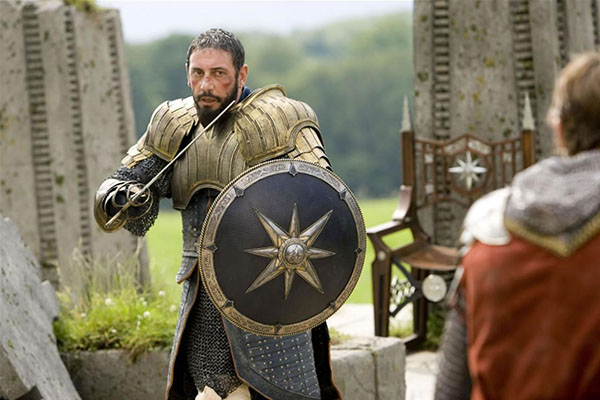 So why didn't it do as well as it "should" have? Bear in mind it did make close to $500 Mil at the Box Office, but against a budget that was nearly half that amount, that's still a paltry return on investment. And I think, really, the answer is audience indifferent and high fantasy fatigue. Three years is a long time between entries in a franchise (hell, the Marvel films generally release three-a-year and right now, with less than a year between Spider-man: Far From Home and Black Widow, it feels like forever) so I think the time it took for a Narnia sequel to come out did the film no favors. There's a reason the Harry PotterFirst released as a series of books (starting in the UK before moving worldwide), the Harry Potter series gained great acclaim before even becoming a series of successful movies. Now encompassing books, films, a prequel series, and a successful two-part play, the series even now shows no end in sight. films came out every year: gotta keep the audience hooked.

Plus, again, the first film in the series, The Lion, the Witch, and the Wardrobe, just wasn't very good. Once people had time to sit and think about the film (three years) they probably all thought, "why would I see another one of these." There's nothing wrong with Prince Caspian -- I think it's a rousing adventure with a lot of great moments and a pretty solid story. Hell, it even managed to downplay the religious elements that were so prevalent in the first film, making it much more palatable to general audiences. It's the kind of sequel that improves in every way on what came before. It should have been a hit. And it wasn't.

Still, it did just well enough to warrant one further film in the series, Voyage of the Dawn Treader. If it's anything like Prince Caspian there's a solidi chance this film could (prematurely) end on a high note.