The Clown Is Back In Town

I was pleasantly surprised by the 2017 rendition of It. Most adaptations of Stephen King's works have been awful, to say the least, and even the previous version from 1990 had it's issues (numerous indeed). The 2017 version of It, though, was a fairly solid horror adventure, adapting only the half of the book dealing with the younger versions of the heroes, crafting a movie that wouldn't be out of place among The Goonies, Gremlins, and Stranger Things. 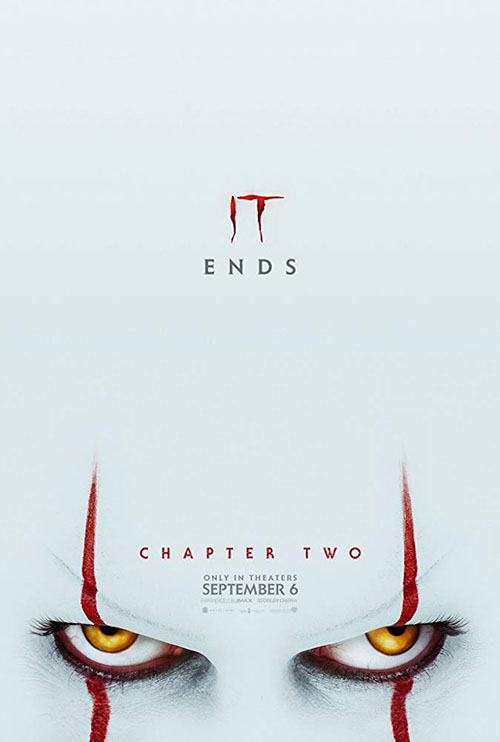 That said, the movie wasn't without its flaws, with the film basically collapsing at the end right when the monster was fully revealed on its home turf. The film want from creepy and disturbing to rather silly, honestly. The power of It is in the mysterious ways its creature moved, in its power of illusion. Once the monster is revealed, all its tricks stripped away, it's hard to keep the momentum going; he's not scary once you see him up close. So the sequel, It: Chapter 2 was fighting at a bit of a disadvantage: it had to find a way to make the monster scary again despite our knowledge of the creature from the last flick. And then it had to craft a fulfilling story from what was, essentially, the leftovers of the book. And, sadly, the film doesn't even come close to tackling those issues.

Set 27 years after the first movie (in 2016, as the first movie was set in 1989), we find that the creepy killer clown-thing, Pennywise (Bill Skarsgard), has returned. This prompts Mike (Isaiah Mustafa), the only one of the Losers club to remain in Derry, to call up all his old friends -- Beverly (Jessica Chastain), Bill (James McAvoy), Richie (Bill Hader), Ben (Jay Ryan), Eddie (James Ransone), and Stanley (Andy Bean) -- so they can come back to Derry and help fight the sewer clown like they promised all those years ago. Only problem is that since leaving Derry, most of the Losers have forgotten all about Pennywise and the evil things that happened in the town all those years ago. So now they first have to find a way to regain their memories and then figure out how to take out Pennywise for good.

With the way the two movies were divided up, a movie set mostly focusing on the adults was inevitable considering the first movie was a smash hit. The production team said that making two movies, kids and adults respectively, was always the plan, but let's face it: if the first film had been a failure we wouldn't have gotten a second one, so the first film had to be told in such a way that it could be its own complete story. No matter what the plan was, or how much material was left out of the first movie from the book, the simple fact was that we got a complete story the first time around; anything that came after was going to feel like an addendum, a, "hey, we already got the complete adventure, but let's check in with these people years later..." It was an uphill battle that, sadly, the second film just doesn't quite manage to beat.

Part of the problem is the fact that we already saw the major beats of the story the first time around. Because the book was told with interlocking tales, children and adults, that prompted and fed into each other, the sequel had to find a new way to tell its story after all its interlocking bits had been used up. That meant adding in new material, bits featuring the younger stars set in the past, to give the adults fleshing out and context. To regain their memories, the adults each go off to find a totem of who they were in Derry, things that will help them regain their power so they can then sacrifice these totems to some spell that will defeat It. Essentially, the characters are sent on glorified fetch quests, and instead of six characters united for one story we get six individuals spending a good chunk of the middle of the flick on their own personal adventures. Some of them are interesting, or scary, or amusing, but none of them are all that necessary, really. 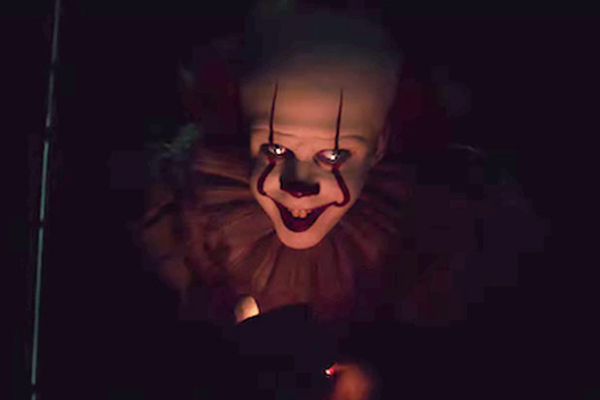 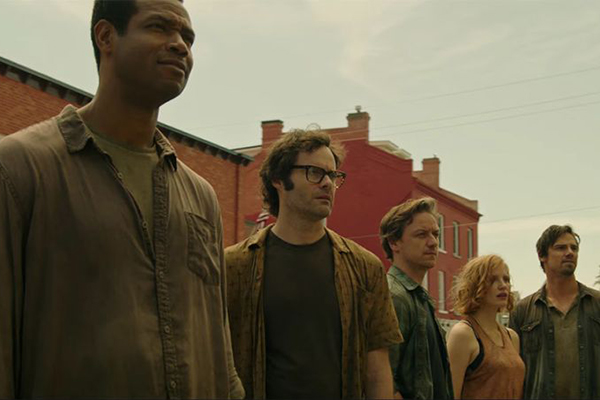 Even when the the movie is trying to tell a cohesive story, at the beginning and the end, it still isn't able to do it with any kind of consistent tone. As I said before, once the monster was revealed the scariness of Pennywise faded away. That was a problem in the book and the mini-series where the clown was revealed at the very end of the adventure for both kids and adults. It's a bigger problem here, though, because we already had the reveal essentially halfway into the grand story, at the end of the kids' tale. Now we have another two-ish hours to fill with a villain that doesn't seem scary anymore. All of his tricks, viewed with the knowledge we have, seem less scary than comical. In fact, much of this movie is just comical even when its trying to be scary.

Take, for instance, an early scene where the adult characters are all gathered around a restaurant table, eating and laughing, together again in Derry. The scene is light and funny, just a bunch of friends reunited like its old times all over again. But then the dread starts to keep in, right around the time they open their fortune cookies and receive a message from Pennywise about their missing, dead friend. It's creepy and weird, and a perfect moment for the horror to build. But then the uneaten fortune cookies start breaking open, like eggs, and weird little creatures come crawling out. I don't know if it was supposed to be scary, but the moment was anything but. I was laughing out loud in the theater at the comical nature of what was going on, and many other people in the audience with me opening weekend were as well. And this happened over and over again: the film would try for scares but would only achieve comical blundering.

That is when it even took a swing at horror. Often the film would purposefully deflate itself with humor. The funniest bits need to be credited to Bill Hader who manages to deliver his bon mots with the right dry voiced delivery that they always landed. His one-man, motor-mouthed patter throughout the film kept the movie running light and fast and made the film fun to watch. When he was on screen, especially when he's playing off James Ransone (acting as the consummate straight man to everything going on around him), the movie really gels, not as a horror movie but as a throwback, 1980s comedy-horror fest (like Gremlins or The Lost Boys). Not really scary, but with a good ambiance and plenty of jokes.

The problem is, naturally enough, this is an ensemble flick where Hader can't be on screen all the time, and when he's not around the movie drags. The rest of the actors, McAvoy and Chastain and all rest, are fine, solid in roles that are largely underwritten. Their scenes generally are written to be scary which makes the unintentional humor that comes out in their moments hard to tolerate. Their sequences take a movie that feels like it wants to be funny and scary into a realm where it's funny because of how bad it is at being scary. That's not a great look for a big-budget Hollywood horror flick. 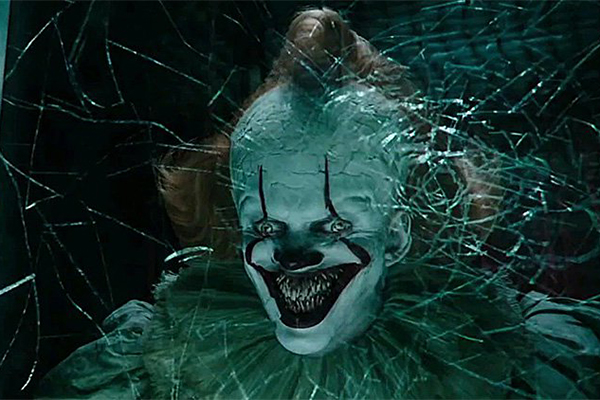 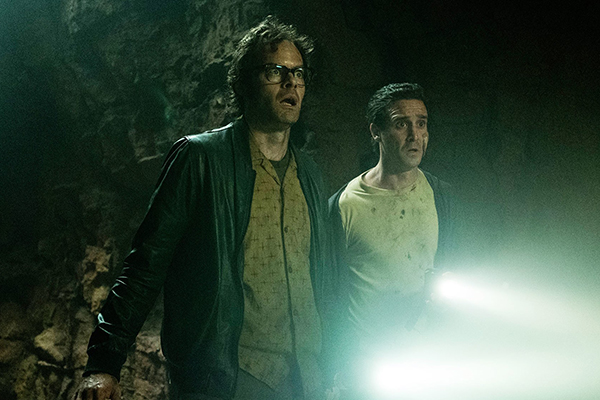 In large part I think the problem is in the special effects themselves. I've stated before that horror is best done with practical effects. We can see that illustrated clearly in the differences between the 1982 original The Thing and its well-intentioned 2011 prequel: the former used practical effects to create convincing horrors while the later used CGI effects that felt airy and insubstantial. The same problem creeps up in both It and Chapter 2, but the sequel leans harder into the special effects to create its horror but because the special effects just don't work -- once again, airy and insubstantial -- the horror doesn't hit like it should. Instead of being scary, it's just funny how bad it is.

Plus, the film still doesn't feel complete. Sure, all the material that was in the books has been adapted (with a few purposeful omissions that everyone seems to agree were for the best), but the producers left in clues about Pennywise's past, story beats that are raised here but never explored. It's pretty obvious the producers want to create further sequels (or prequels) that feature more about Pennywise and started introducing these story beats here to set up those future films. Where the original film felt like a self-contained story, this film feels like half a story that's setting up some kind of "It Cinematic Universe". I hate it when films do that.

It: Chapter 2 left me cold. It's a film split between too many masters, not quite sure if it wants to be a horror story or a Goonies-style, gently scary adventure. Plus it fails to even give us one cohesive story without setting up more beats and further story threads for future films. The first film is a great little tale told the right way; Chapter 2 fails to learn from its predecessor, failing to live up to the potential of the first flick in any meaningful way. It's fine for a single viewing, but I doubt I'll revisit Derry in 2016. For me, Derry is best viewed from the 1980s.