Don't Trust the Bitch in Apartment 23

While going through Veronica Mars I was reminded that Kristen Ritter was on that show (she made a few appearances as a recurring character in season two). It was interesting to me at the time that Ritter appeared in that show about a female detective before eventually going on to start in her own thematically similar series, Jessica Jones on NetflixOriginally started as a disc-by-mail service, Netflix has grown to be one of the largest media companies in the world (and one of the most valued internet companies as well). With a constant slate of new internet streaming-based programming that updates all the time, Netflix has redefined what it means to watch TV and films (as well as how to do it).. What it also reminded me of, though, was another series, Don't Trust the Bitch in Apartment 23, a series starring Ritter (as the titular bitch) that aired for two seasons starting in 2012. 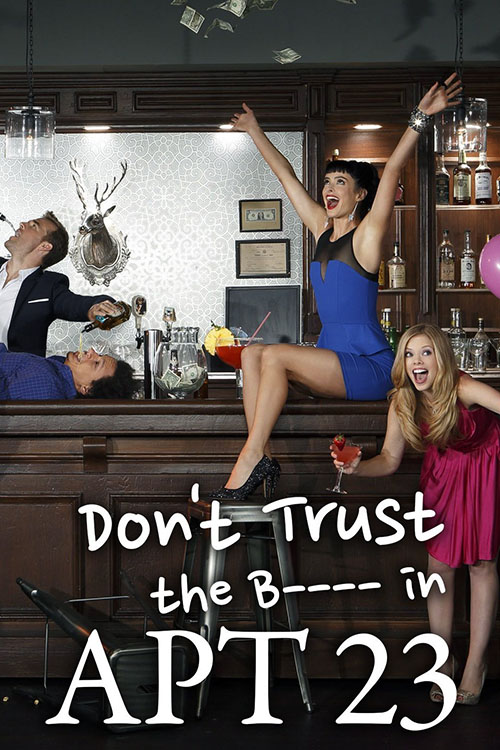 If you haven't heard of this show before, don't be surprised. It's a sitcom that came and went with little fanfare, despite the fact that it was able to rack up two short seasons. It's the kind of show most people would have ignored, myself included, and if it hadn't been for Netflix, and my own idle curiosity compounded by a lack of anything else to watch, I probably wouldn't have noticed the show's existence either. I'm glad I did, though, because lurking within this show is a real comedy gem. It's the kind of title people will find and then talk about with like-minded folk while everyone else (that hasn't seen the show), will just act confused over what all the fuss is about. Honestly, in that way, it's a lot like the Clerks animated series.

In Apartment 23, we're introduced to June Colburn (Dreama Walker), a freshly graduated MBA who's just moved to New York City to pursue her dream job at a major finance firm. Her whole life in one track, with her job lined up, an apartment furnished by the company, and a fiance who, soon enough, she would be marrying. But then the dream quickly falls apart as the financial firm she's supposed to work at goes belly up the day she starts working there (oh that darn SEC pursuing financial crimes so well). That takes out her job and her apartment (since they were tied together). June has to find a new job (which she soon does, working at a small coffee shop) and a new place to live. The latter comes together when June meets Chloe (Ritter) and agrees to live in her apartment, #23, as the new roommate.

Unfortunately for June, Chloe is a total bitch. She's a con-woman who regularly pulls the "new roommate" scam: she'll open her place up, find some sweet girl to move in, get first and last month's rent plus security, and then do everything she can to chase them out. It's worked amazingly well in thee past but, much to Chloe's amazement, June won't be forced out. This starts a battle of will between the two women that quickly blossoms into a friendship, a good and evil bonding together relationship that will drive the series.

Really, much of the series does boil down to that basic formula: Chloe will get it into her head to do something bad (create a webcam business out of the apartment to pay rent and not tell June about it; get a foster child and use them as her personal secretary; rent out the apartment of her best friend, James Van Der Beek, while he's out of town), and then June has to step in and try to teach her the error of her ways. Or get caught up in the shenanigans and sometimes sink to Chloe's level. The chemistry between the two leads drives these interactions and makes the concept of the show work much better than it should. But, yes, every episode takes a similar tack to its plotting (with few exceptions) so after a few episode you will kind of see where most of the stories are going. 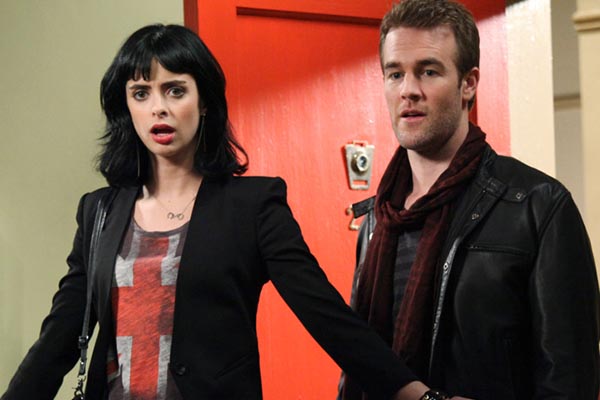 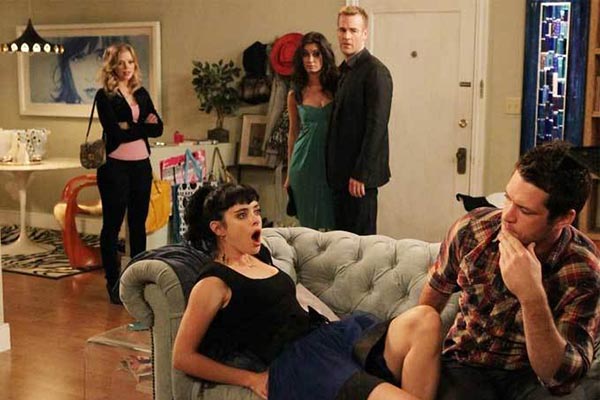 And yet it works because of those two leads, plus the third major player on the show: James Van Der Beek. Yes, the actor is in the series and he plays a very fictional version of himself with aplomb. Part enabler of Chloe's cons (because he thinks they're funny), part oblivious superstar, James adds needed humor and satire to the series, making it about more than just two girls living in New York and doing bad things. With James on the show it also gets in some great Hollywood satire, finding a way to heighten the reality of the series and make everything feel a little more surreal and fictional. The show can get away with a lot more because of this side of the series.

Plus, honestly, the show is just hilarious for most of its run. It comes out of the gate swinging with its pilot episode, and then manages to out do itself a few times. Chloe, naturally, drives much of the action through the series, but James gets to share in the glory with an extended plot line about him going on Dancing with the Stars. It's the kind of B-list series the actor is qualified while, at the same time, he can treat it like it's a huge deal, something to really burnish his cred and open new doors for his career. I doubt anyone has ever come away from DwtS more successful than when they went on, but James sells it like this is the next big evolution of his career.

That's what this show managed to get so right: that heightened reality that made it so you could laugh at all the dumb, and mean, and stupid things the characters did without necessarily feeling bad about it. Yes, Chloe is a terrible person but, within the confines of the world, you can't help but like her. Plus, she's played with such style by Ritter that the character just works. She's evil, and manipulative, and nasty and yet somehow likable. It's a real credit to the actress that she was able to pull of a character like this with such style.

That said, while I like the show I do have to admit that it probably ended right when it should have. But the tail end of the second season the show started to lose its way. Many of the plots it was churning through felt like retreads of stories to come before, and very few of the things Chloe did seemed all that shocking anymore. The series ends on a dud of an episode (it's supposed to be a parody of Soul Train-style dance shows but, really, goes absolutely nowhere and does nothing for the characters involved) before quietly ending with a whimper. It honestly feels like the creators had run out of ideas with what to do for the characters so the cancellation of this show wasn't really a sad thing. It burned bright and then faded away, getting canceled before it really got bad (that last episode notwithstanding). 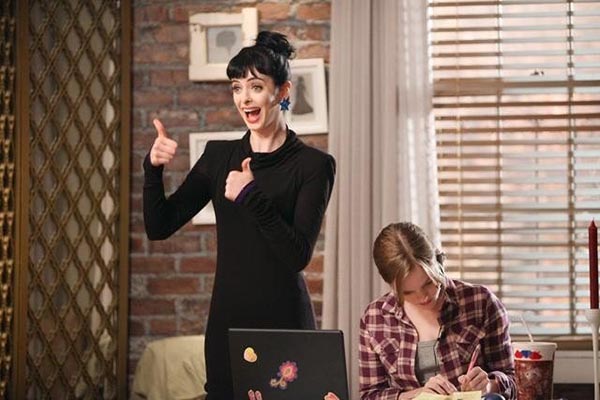 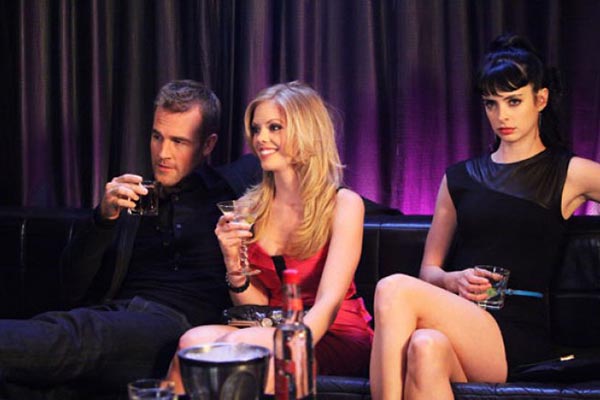 I mentioned the Clerks animated series before and I think that the comparison to between that show and this one is apt. Both are shows with weird, heightened realities that came out of the gates swinging before, seemingly too quickly, getting canceled. It's just that in the case of Clerks, the cancellation happened before the show even really got off the ground, so that series has a selection of six perfect episodes that you can watch again and again. Don't Trust the Bitch in Apartment 23 held on a bit longer, just long enough to almost outstay its welcome. It's an almost-perfect series that probably could have ended an episode or two earlier. If a third season were to have happened the show would have had to undergo a serious reinvention to stay fresh. Otherwise it would have gotten stale and I doubt I'd be talking about it as effusively.

Due to its short nature, Don't Trust the Bitch in Apartment 23 is a great show to pop on and watch (if you can track it down). Give it a chance and I'm sure you'll enjoy the hell out of it. Just be warned that once you hit the last episode you might just want to turn it off early.