Who's Incredible? You Are!

Years and years ago, I went on the record for this site (well, the previous version of this site) as a huge fan of the original Incredibles film. Anyone that has read this site knows full well that I'll deep dive any series I can (hell, I wrote four articles about The Matrix recently just so I could post an old article I wrote about rebooting the film series -- my need for obsessive completeness knows no bounds). While I wrote about the Incredibles there was never any follow up for the all be inevitable sequel. I mean, that film was so damn good and it's not as if Disney/Pixar is opposed to making sequels (such as every damn Cars and spin-off Planes film). 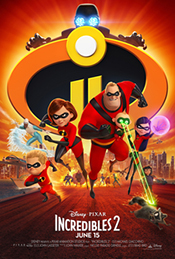 And yet, all these years later there wasn't a sequel to the Incredibles to write about. Until now. After 14 years of waiting (which, at the start of the sequel, Pixar has the lead stars aknowledge and apologize for as if it's somehow their fault), Incredibles 2 is out. I freed up some time this last weekend to plop my ass down in a seat and watch the film to see if it was worth the wait.

Picking up immediately after the events of the first film, we see the Incredibles family tearing off to fight the Underminer. In the process of this battle a good portion of the city is damaged and it's all blamed on the Incredibles (because the city had insurance and if the superheroes hadn't interfered, less of the city might have been damaged). The ploice let them go in the end but the government organization that's been protecting superheros is finally shut down, leaving our super family without a lot of options.

In steps Winston and Evelyn Deavor, a pair of rich siblings who want to make superheroics legal again (just like in the good old days). To that end they want to employ Helen Parr (Elastigirl) to be the lead spokes-person/superhero on the scene as a kind of good-will tour (Elastigirl admittedly does far less damage than her husband, Mr. Incredible, when on a case). But smoothing over superhero public relations isn't her only job -- a new supervillain, Screenslaver, has appeared and want to rule the world (or make everyone pay or something), and it's up to Helen to defeat the villain and save the day for everyone, civilian and superhero alike.

While the film tries to tread new ground by making Elastigirl the lead hero of the film, I wouldn't say it drastically changes the story over all. If the first film was about Bob (Mr. Incredible) getting his mojo back as a hero while Helen stayed home with the kids, the second film reverses the characters to the same effect -- Helen has to find her mojo while Bob learns to be a stay-at-home parent. Many of the beats are the same -- hero/heroine has an initial big sequence against the villain and comes out successful but that success leads to a false sense of security before a twist happens that forces the rest of their family to come to the rescue and save the day. It's not a shot for shot redo of the first film but, then again, it's not that far from it either. 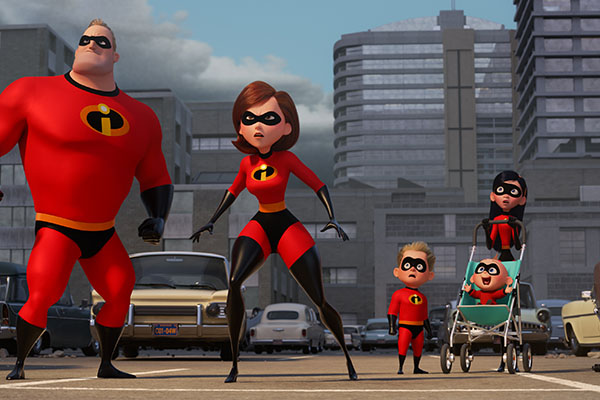 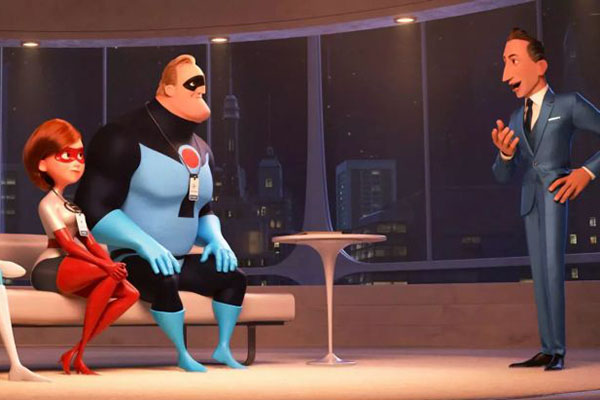 The Bob side of things isn't that that interesting, either. A big part of his plotline is dealing with Jack-Jack, the Parr's infant son (and youngest of their three children). Jack-Jack is just starting to get his powers and he has a ton of them (from a demon form, to firey combustion, laser eyes, dimensional travel, multiple-duplication, teleportation, and on and on. The creator, Brad Bird, clearly thought making Jack-Jack and "jack of all trades" (hey, it's in his name) was a good idea but there's no context in the film for how this could be.

Every hero we see is defined by their single power such as Frozone and his ice (ala Iceman), Elastigirl and her stretching abilities (Mr. Fantastic), and Mr. Incredible and his big, burly strength (too many heroes to count). Maybe they were trying to imply that because Jack-Jack had two supers as parents he got extra powers himself but his siblings don't have that -- Violet has invisbility and force shields (exactly like Sue Storm) while Dash can run fast (Golden Age Flash). Why does Jack-Jack get extra powers? Sure, I'm over thinking this, but every time he gained some new ability I wanted and explanation for why.

Maybe it's just because the character himself is so annoying to me. He's a baby, sure, I get it, but he gets himself into trouble as a way to force the rest of the family to react to him when more time, for me, should have been given over to the characters who had actual plotlines instead of just glossing over them for amusing "look at what Jack-Jack can do" moments.

This honestly leads me into my next issue with the movie, namely that not enough time is really devoted to the main story of the film. After Helen confronts Screenslaver, she seemingly defeats him and saves the day. The twist that comes later is supposed to justify this, but up until now we didn't get enough of Screenslaver to make him feel like much of a threat. He gets a couple of good action sequences and then the ride is over. It's a waste of a charater when more time spent building him up, seeing his schemes, and watching the world react would have made him feel like a bigger threa, and then made the following twist have that much more impact. By selling the villain short the twist doesn't land like it should (especially since I'd more or less guessed in within the first 15 minutes of the film). 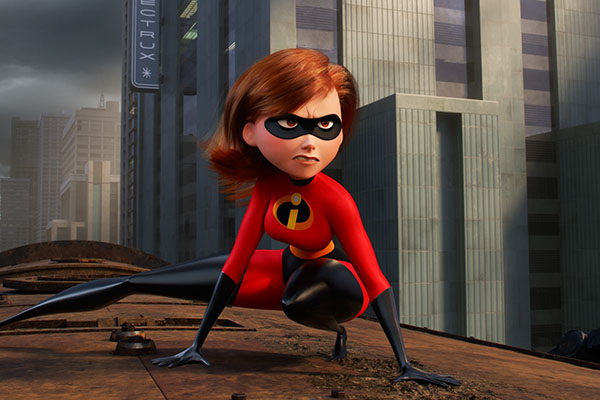 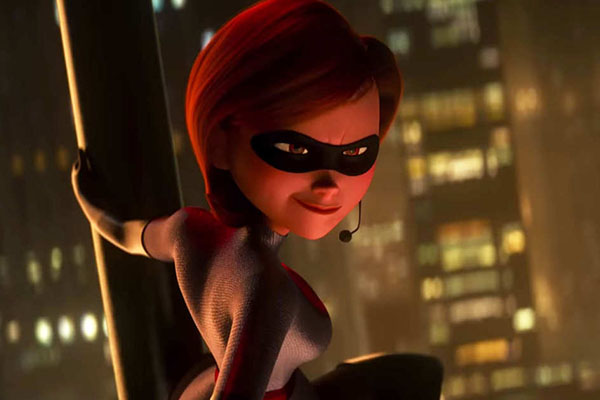 And then there's the ending. I won't spoil it since the film is already out, but we essentially get a super-happy ending (a la Wayne's World) Things just kind of happen and everything works out in the span of a couple of moments. The production team clearly wanted to get us back to the end of the first film where, we think, superheroes will finally have their day, so they quickly gloss everything over to get us back to that point.

The thing is, that ending was earned. When the Incredibles put on their masks to fight Underminer, we feel that the world has changed, that a monumental shift has happened for that family. The reset button is pushed at the beginning of this film and then again at the end to do... what? If they'd just let superheroes have their day at the end of the first film, the plot of this whole movie would have been different. This movie isessentially uncessary and the producers and allowed the first film's ending to actually stick.

I want to note that there were parts of the movie I really liked. Elastigirl is a cool character and her action sequences feel very different from Mr. Incredible, giving the big set-pieces of this film a different vibe from the first flick. Screenslaver is a cool idea for a character and the scenes he's given are neat. I really like a fight sequence that takes place in Screenslaver's secret hideout -- that one does a good job of making it feel like Helen might be overmatched (as well as making Screenslaver actually feel scary). Many of the smaller character moments work, and there's a lot of humor derived from the reversal of fate for Mr. Incredible and Elastigirl.

It just doesn't all come together in the end. It's a fun movie and a decent sequel, but after 14 years I would have liked more than just a basic retread of the first film that essentially puts our characters right back where they were at the end of the first movie.