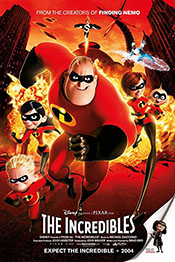 We start in a world where superheroes exist. They are trusted members of society, helping to stop all kinds of crimes daily... until someone sues the superheroes (supers). Suddenly, cases are filed left and right. The government steps in, puts the supers into hiding, much like the witness protection program, and forces them to stop being super heroes.

Cut to fifteen years later. Bob Parr (Mr. Incredible) and his wife, Helen (Elastigirl), have settled grudgingly into their not-so-super life. Bob works at an insurance company, comes home, hangs out (grumpily) with the wife and kids... and goes back to work. But when he gets the chance to fight crime and be super again, that's when he finds himself getting his life back together.

The strength of this movie is in the story -- it's a real, silver-age inspired adventure. What do the extraordinary do when they can't be super anymore? That simple premise leads to an action-packed, emotional story of finding your way in life and defining who you want to be (within the context of society).

Now within the context of comic books and comic-inspired movies, the characters might not seem all that new. The family of superheroes seems a lot like, well, the Fantastic Four (another "family" of heroes) -- except without the Human Torch (they have a speedster instead). The powers are similar enough that they seem more than simply "inspired" by those characters (and others, as well), but this really shouldn't be viewed as a detriment to the movie. Taking firmly established character-types is like taking cookie-cut characters: but once they are established, this movie takes them to new heights, which is what really matters.

You can see on-screen that this family is struggling with the fact that they have powers and can't do anything with them. You feel for them as they try to find their various places within their own lives -- and this provides the emotional thrust, and payoff, of the movie.

There were some other minor quibbles I had, in general. The main villain is very annoying; I mean, past the point of being a character trait and just straight to annoying. I would have liked him toned back a touch, or at least had a few layers to his character so that the annoying trait wasn't the only thing you saw of him.

On the technical side, Pixar always does excellent work with their visuals. It's hard to ever fault them for what they put on screen, especially when they are miles above any competition. There were a couple of effects that pulled me out of the movie (the hair effects are still a little plastic at times in comparison to the rest of the visuals), but there were moments that were so gorgeous, we can forgive the little things (the water chase sequence with the kids is phenomenal).

And speaking of the best visuals, it may seem a little lame, but one of the bits I liked best was the end credits. There's a stylish, 60s era charm to them that makes you snicker, and brings you right back into the excited feelings you had while watching the movie.

This is a truly engaging flick -- one that it's hard to imagine anyone wouldn't enjoy.