Since I'd already reviewed the first two "Cornetto Trilogy" movies by Edgar Wright (starring Simon Pegg and Nick Frost), what with my review of Shaun of the Dead over on the Inverted Dungeon and our coverage of Hot Fuzz here on this site, it seemed only appropriate to finish out the trilogy at take a look at The World's End. It's safe to say, too, at the outset that The World's End is a different kind of movie from the previous two flicks in the trilogy. 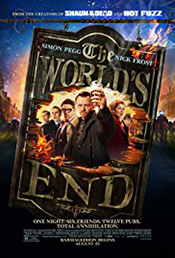 Where as Shaun and Fuzz are both parodies (zombie flicks and action flicks, respectively) with the films poking fun directly at the conventions of their source materials, The World's End is less a parody than a comedy-drama-sci-fi hybrid. Ostensibly the film sets out to skewer alien invasion flicks in the same way its predecessors did for their genres, but really the film doesn't poke fun at the genre so much as exist within it.

The World's End concerns Gary King (Pegg), a guy that was the absolute shit around town back when he was a senior in high school but, in the intervening 20 years, hasn't grown up or changed at all, much to the chagrin of his one-time best friend Andy (Frost) and their associated group. King, as revealed later in the movie, has been going through a really hard time and just wants to get the gang back together for one last great hurrah. The goal: the do the Golden Mile, a trip through their old home town to hit 12 pubs (for at least a pint at each one), all leading up the final pub, "The World's End". When they all tried in in high school they never made it to the last three and King feels that if they just managed to make it to the end everything in his life (and theirs) would be all better.

But then aliens. Seriously, after a stop at one of the pubs, Gary King gets into an altercation with a street punk. They have a fight in the lavatory, Gary accidentally knocks the kids head clean off (to a splash of blue goo), and the body keeps on twitching. That's when the aliens are revealed and crap really goes downhill (for the friends, not the plot). Then they have to figure out what's going on and how deep the conspiracy goes.

Some of the material is actually pretty heavy in the movie: the long simmering fight between Andy and Gary, Gary's own depression (and apparent attempted suicide), Gary's inability to see all the damage he's doing (and done). Some of it is played straight, some of it is played for laughs, but none of it is done with entirely a light touch (which, in this case, is good since the material is treated respectfully). What it isn't, though, is a straight up comedy. Those expecting another comedic romp like Shaun or Fuzz would have gotten a very different experience with The World's End. 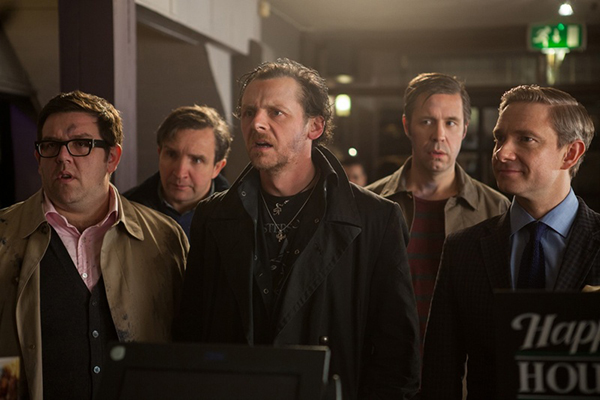 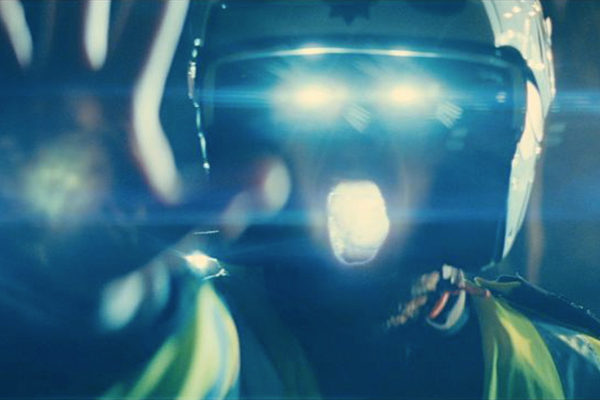 Yes, the film does play with the some of the tropes of alien invasion films such as Body Snatchers. People get captured and replaced by alien robots who look and act like the originals. Maybe, from a particularly British sensibility, it can be seen as parody since the aliens aren't malicious just very, very polite and proper. It's the kindest, nicest invasion, really, but the humor of that is very subtle indeed. It works in context, but again, this isn't a laugh-out-loud scenario. After the first couple of attacks from the aliens, you get used to what they are and how they work and the rest of the invasion is mostly background noise to the group of friends we've been following.

It also has to be said that these aliens really aren't much a threat. The film attempts to mine some tension from the alien attacks, staging big fight scenes with the robots, but these aren't action movie stars (Pegg may co-star in the Mission: Impossible films, but Tom Cruise does all the actual action in those movies). The actors in this film are very fun but they weren't hired for their action chops, and the attempts at actual fighting, especially the big bar brawls, just highlight how much these guys can't fight. Since they still managed to fight off the aliens every time, though, it leaves you thinking that the aliens really aren't all that scary at all, so there's no tension derived from them.

"But it's a comedy," I hear you say. "It doesn't need tension." I would argue, though, that tension can make laughs better. Just look at any of the great horror films, the ones that punctuate big scares with the occasional laugh. You can accentuate one with the other, laughter and thrills, and they make each other better and more rewarding. A movie like The World's End would have benefitted from some real scares to up the tension which then would have made the release of a good laugh even better. This movie doesn't have that feed-through, though, and fails to build like it should.

Not that I don't like this movie, mind you. It's a very funny film with a good heart to it. It's just that it could have been so much better. Shaun and Fuzz were home runs (to use a baseball metaphor on a geek-life site), but The World's End is a solid double, maybe a triple at the outside. It's good fun, but not anything like you want from a "Cornetto" movie. You'll probably end up enjoying this movie, but I don't expect anyone to watch it anywhere near as often as its predecessors.