Paul Verhoeven is a director best known for what can only be described as exploitative works. That's not meant as a bad thing, necessarily, as the exploitation genre of film has it's place, pushing boundaries in ways that the more straight laced, mainstream cinema can rarely handle. You don't get works like Blacula, Coffy, or Across 110th Street without the Blaxploitation genre. You don't get Mad MaxStarted with a single 1970s Australian exploitation flick (a popular genre in the country at the time), the Mad Max series went on to spawn three sequels, an entire genre, style, and what many consider the greatest action film of all time, Fury Road. Not bad from a little low-budget film about cars smashing each other after the fall of society. without the exploitation films of Australia. And, for a time in the U.S., Verhoeven brought the exploitative sensibilities to Hollywood, creating over the top, violent (and sexy) films that really hit with the American public. 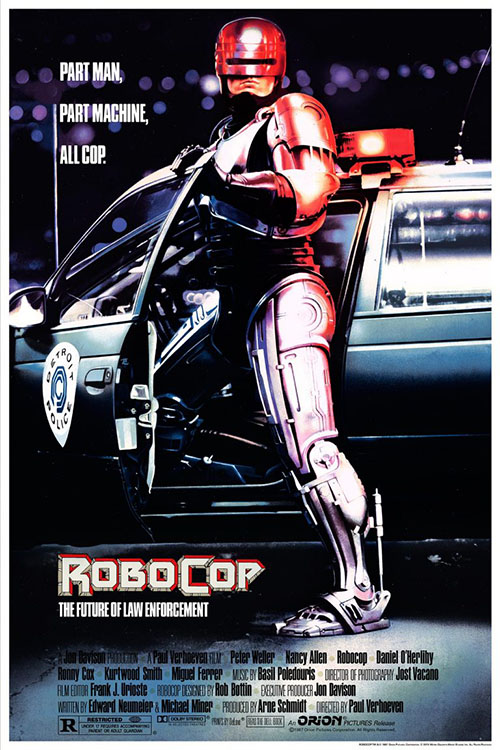 For Verhoeven, his star really rose on the back of one bionic man: RoboCop. His earlier works were largely released in Netherlands, but after the Box Office failure of Flesh + Blood in 1985, Verhoeven found just the right mix of elements for the era with his violent social satire in RoboCop. This was a film that played in the action spectacle of the 1980s, pitting Peter Weller's bionic man up against the liked of Arnold and Stallone at the Box Office. But while it played with hyper-violence one could say that the film never really condones it. Verhoeven uses the violence and the gore to lay his own messages about corporate greed, police ineffectuality, the drug war run rampant, and even Hollywood's own lust for violence and gore. It's a very over-the-top, action oriented film, but you always get this sense that Verhoeven is poking fun at you for relishing the violence.

The film picks up in future dystopian Detroit (as opposed to current dystopian Detroit), with Office Alex Murphy (Weller), new on assignment in the Metro West division. Cops are falling left, right, and center in this precinct all because of one violent and insane drug runner, Clarence Boddicker (Kurtwood Smith), and his gang. They've cut a bloody swatch through the city and only the cops of Detroit, with the backing of corporate overlords Omni Consumer Products (OCP), can possibly bring this guy down, an unlikely scenario, all things considered.

The police, though, aren't the only line of defense that OCP is pursing as the corporation is also looking into robotic crime enforcement. When one project, ED-209, fails rather spectacularly (blowing away one of the VPs of OCP), a young upstart in the corporation, Bob Morton (Miguel Ferrer), pitches his idea: RoboCop, a fully autonomous, cybernetic officer. The only trick is that to build their new robotic cop they need a cop's body. A dead one. And, sadly, after a run-in between Murphy and Boddicker leaves the heroic cop dead on the ground, the RoboCop project just might have its new host. Murphy may be dead, but he can still find a way to save Detroit.

From the start, RoboCop is about more than just a robotic cop. In much the same way that Verhoeven used the heightened reality of his other films to poke at the audience -- Total Recall and making the viewer doubt everything, Starship Troopers and its thinly veiled anti-propaganda stance -- RoboCop stands more as a commentary on corporate greed than as an action film. It has plenty of action, which we'll get to in a bit, but it's political stance is far more important to the picture than the action itself. 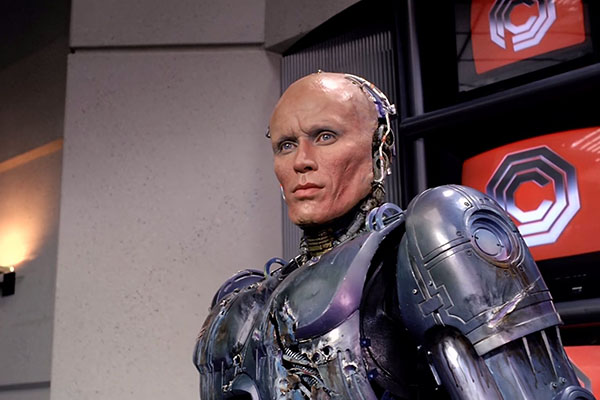 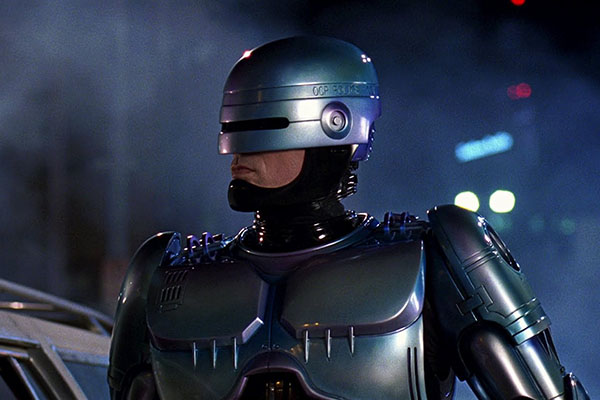 Written by Edward Neumeier and Michael Miner and then directed by Verhoeven, this picture feels like the right kind of work for the director. From the opening scene where ED-209 murders an OCP employee, to the constant talk of OCP privatizing the police, and several corporate members talking about the money to be made from RoboCop (even as they ignore the person within the metal shell), it's pretty clear which side of the corporate line the film falls on. The heroes here are the down on the streets cops, just trying to do their jobs, and not the corporate fat cats up in the ivory towers.

Now, when people talk about a film you really couldn't make anymore, you have to imagine RoboCop is on that list. That's not just because a new version (like the 2014 remake) would tone down the violence and gore, but also because it's hard to imagine a film with this subversive streak, made today, glorifying the police in any respect. This is a film with a very clear "good guy / bad guy" philosophy, and shades of grey, like our current political climate surrounding the police and their use of excessive force, would color a film like RoboCop differently. Although, I gotta say, if you could get Verhoeven back for a new RoboCop, one that used his satirical edge to tackle issues like police brutality, I'd be on board for that film.

Frankly, this film does make it out like being a brutal (robotic) police officer is the only way to get things done. RoboCop shoots a lot of people in this movie; not just the drug runners that lead to his human death early in the film but many other criminals (like shooting a would-be rapist in the nuts). Don't get me wrong, there's a certain catharsis in the moment to seeing Murphy become invincible so he can go around and clean up the streets of Detroit, and the film knows this. A certain part of it revels in it. But it's also hard to accept the violence, even coming from a cop. Maybe, deep down, Verhoeven knew this, too.

That's likely part of the reason why the drug runner storyline is tied into the corporate storyline, with Boddicker being a lackey of OCP Senior V.P. Dick Jones (Ronny Cox). That makes it less about crime on the streets and more about the failure of corporate America. That's a target everyone can get behind, rooting against bad guys in bad suits. I can appreciate the pivot, even if the film does make it seem like all it takes is a bullet to turn around an evil business. That's a little too pat and easy of an ending when, in reality, the rot is systemic. Had Verhoeven come back for a sequel, one would like to think he would have focused on the larger corporate issues at play... but that wasn't meant to be. 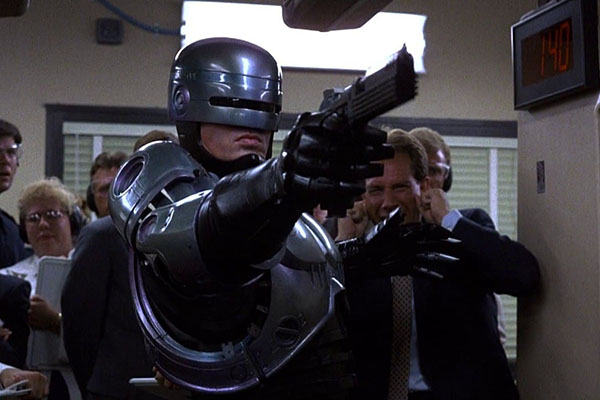 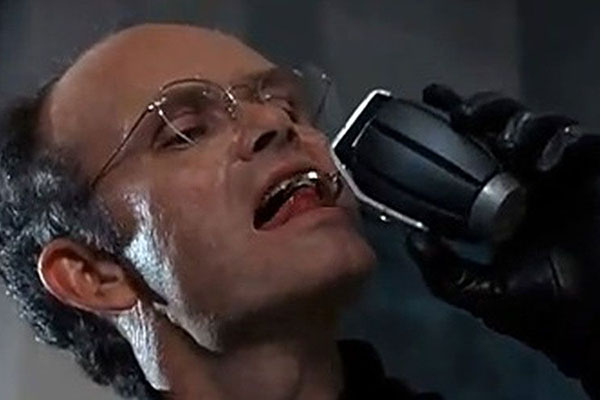 Of course, on another level the film really does just work as an action flick. Verhoeven has a great eye for action, creating long takes with clear momentum and motion. The action is clear and clean, easy to follow but propulsive. It's over-the-top and gory, absolutely drenched in blood and bullets, and it works so well at the lizard-brain level. The early brutality of Murphy's execution leads to the catharsis of Murphy killing a lot of dudes real good, in a gory and satisfying way.

That, really, is the power of a good Verhoeven film: he delivers exactly what you want (violence and action in this case) layered with a message you'll get over time. The 1980s were a time of excess and corporate greed, all dressed up in fancy suits and a lot of cocaine. RoboCop addressed that through the lens of an action flick with a cybernetic lead, and it dumps a lot of bullets on the villains. There was something satisfying about that back in the day, and that still carries even now. We may have moved on from the 1980s but, man, it would really be nice to have a RoboCop around to clean up the mess of our corporate overlords.