Take It to the Edge, Mav

When looking at Top Gun: Maverick and seeing that it came out 36 years after the original film, the impulse is to say, "did we really need this?" You really can't ask that, though, because frankly just about any sequel isn't really needed. A story lives and dies on its own two feet and if you tell a good enough story the first time around, anything that comes along after fights to justify its existence. And while some could argue that we had plenty of films that felt like spiritual successors to Top Gun (Days of Thunder comes to mind), and plenty of other films that have pushed the military propaganda genre forward in the last 30 years (and the original was propaganda, through and through), the fact is that the original Top Gun made oodles of money and, in the eyes of Hollywood, was just begging for a sequel. 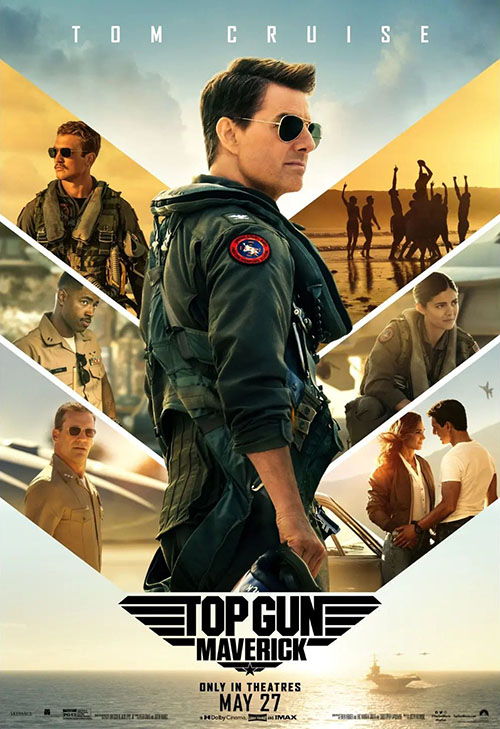 When you come down to it, the only thing that seems really surprising is that it took 36 years to make a sequel and then we didn't get one within a few short years of the original. It's not like Tom Cruise has lacked th clout to get one made -- he's been one of the few consistently bankable A-list stars across these last 34 years, with one of the most successful track records in Hollywood. If Tom Cruise wants to make a sequel, it's all but guaranteed t sequel gets made. Now, he's smart (at least on the business side) and knows that when he does have a failure (such as 2017's The Mummy) there is no point in willing a sequel into existence. Even then, though, it did seem like Tom Cruise was happy to let the legacy of this movie, one of his biggest (as far as his meteoric rise in Hollywood is concerned) stand on its own laurels. That means the story of this film had to, for whatever reason, speak to Cruise such that the film had to get made.

Except, when you watch it, I'd argue it really didn't. That's not to say this is a bad movie; for what amounts to a bit of Hollywood action cheese dressed up with the approval of the U.S. military, Top Gun: Maverick is a fun and handsome looking film. I'd even go so far as to say it was more enjoyable than the original (although, in fairness, I absolutely loathed the original). This is a slick and well made production that benefited from the 36 years between films. Still, nothing about this film necessarily "justifies" its existence, if that's something you need. It's a sequel to Top Gun, and how much you care about that is probably directly related to whether you liked the first film or not. This sequel is not going to sell you on the franchise if you needed to be sold.

The film picks up with our hero, Captain Pete "Maverick" Mitchell, working as a test pilot on a government project. Despite the fact that he should be a two-star admiral by now (a fact the film explicitly tells us), Mav has never quite gotten the stars on his collar. He's too much of a rebel, a bad boy in the Navy plane game. The only reason he hasn't been kicked out of the service completely is because his friend, Admiral Tom "Iceman" Kazansky (Val Kilmer), has had his back, ensuring that Mav continues to fly for the Navy. As we're told time and again, the Navy needs Maverick and pilots like him.

Making pilots like him is what this film is all about as Maverick is dragged back to the "Top Gun" pilot school to teach the next crop of Navy fliers. It seems that a secret weapons-making facility (in an unnamed and undisclosed country) it about ready to start making nuclear bombs and the Navy needs to send in a set of planes to blow the thing up before it becomes fully operational. The flight path in is dangerous, the skill needed is immense, and only the best of the best even have a shot at surviving the flight let alone hitting the target. Only with Maverick's help will these pilots be ready... if they ever can be at all. 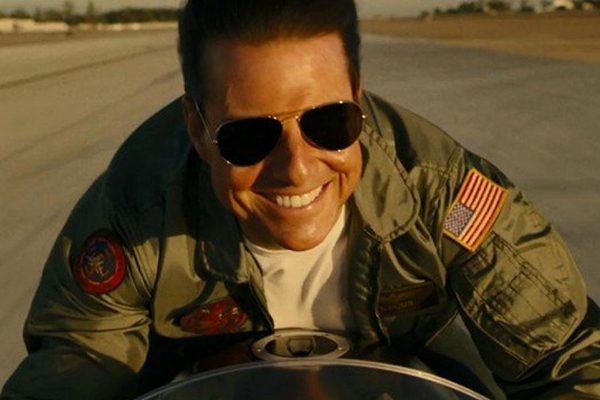 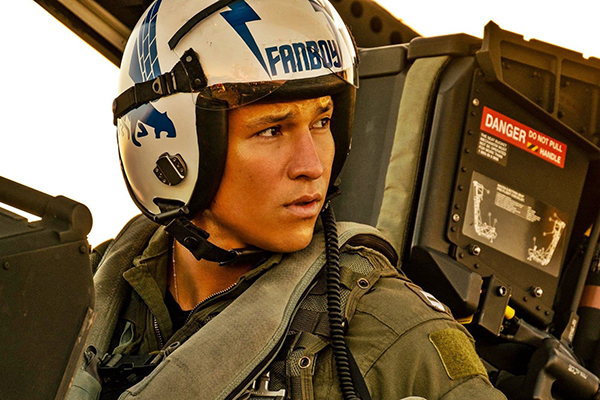 As I've noted on more than one occasion, Tom Cruise really only plays one character: Tom Cruise. Whoever he's nominally playing -- Maverick, Ethan Hunt, that cocky douche from Cocktail -- there's very little of his performance that isn't straight Tom Cruise. Sure, you can probably find some characters that don't fit what you naturally expect Tom Cruise to act like in real life (maybe the dad from War of the Worlds, and that's the only one that comes to mind), but generally when you go to a Tom Cruise film you go to see Cruise by Cruise. You know what you paid for, and he delivers, just like he does here. Maverick in Top Gun: Maverick is pure, cocky Cruise.

But, of course, he also delivers on the other aspect you want from the A-list actor: he does his own stunts. For Top Gun: Maverick that meant flying around in real Navy jets to film all the footage they needed. Now, the jets were rigged in such a way that a real pilot was flying while the actors just "looked the part" as they sat in a back seat, but still adds a real sense of verisimilitude. These are actors, really going through high-g stunts as they fly around, filming and directing themselves in the planes, no green screen of fake digital effects required for this. Now, sure, there's some CGI and other trickery at play, but Cruise, along with the rest of his cast, all did the things we're seeing, more or less.

That's the main reason why this film is so much more enjoyable than the original. The first Top Gun feels very fake. It uses a lot of trickery to make it look like the actors are flying around, but it's a fake reality, a very 1980s "filmed in front of a screen" sense of reality. That editing was choppy, the stunts weren't really stunts, and it all lacked the ability (at least for me) to suck you into the action. Maverick, though, has real stunts with impressive effects, making you feel like you're watching real action on screen. The art of filming fighter jets making things explode real pretty has evolved and that makes this sequel far superior in the action department.

While the action is the strong part, the story of Top Gun: Maverick is the weakest part, for sure. The general plot of the film is pretty similar to the first one with pilots training to fight an unnamed, barely seen villain all before having one important sortie with the "foe" before everyone celebrates the triumphant return of our heroes. Although the plots don't line up scene-by-scene, they're close enough that you could almost see the tracing paper. I don't think anyone going in was really expecting a deep plot for this film, not considering the first movie, but it would have been nice to have something maybe a little different. Something a little more challenging, at the very least. 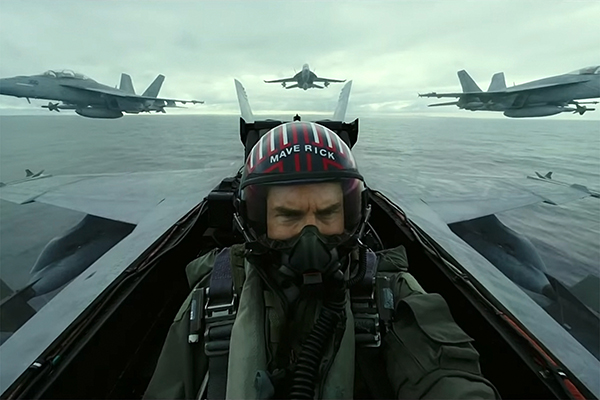 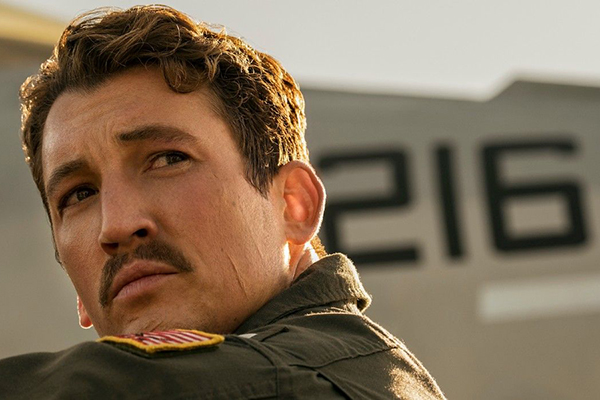 While it's true this film was in production before the start of the Russia-Ukraine war, would it really have been that hard to name the villains in this as the Russians? Is North Korea off the table? There has to be some country we hate that doesn't bother buying our movies anyway that we could have used as the villain here. By keeping the foe unnamed and generic there's little impact for the viewer when it comes to the mission at the core of the movie. Sure, we want the heroes to survive, and in the moment the film does keep you engaged, but lacking a strong villain to play off everything in the film feels too pat, too simple. It's apolitical to the point of fantasy.

Meanwhile, when it comes to Maverick himself, he gets saddled with a pretty boring love story to carry his non-military moments. The part of his love interest, Penelope "Penny" Benjamin, is played by Jennifer Connelly here but it feels like the role was originally designed for Kelly McGillis's as Charlotte "Charlie" Blackwood from the first film. That actress is on the record that she wasn't even contacted for the film, feeling like she was passed over because (paraphrasing her words) she was "old and had a mom body". Penny isn't a bad character per se but she's written in with a history that happened, with Mav, between the movies. Penny wasn't in the first film, didn't even exist when that film was made, and that robs the film of any kind of real emotional heart. Had it been Charlie in the role of a love interest we'd already be invested in the couple's "will they finally make it work" dynamic. Penny just exists because the film needed Mav to fall for someone. It's a night and day difference.

The better emotional story comes from Mav trying to repair his relationship with Miles Teller's Lieutenant Bradley "Rooster" Bradshaw (son of previous film's Goose). Again, most of their story happened between films so the movie has to tell us (instead of showing us) the issues between these two. Watching Mav make it up to Goose by keeping an eye on Rooster, though, has a heart to it that this film needs. It's imperfect, and I really wish all of these characters could have had a film ten years ago to develop the character dynamics we have in Top Gun: Maverick, but it's at least functional.

That, frankly, is how I feel about most of this movie: it's functional. It's has a decent cast, from Cruise and Teller and Connelly to John Hamm as an admiral always riding Mav, and Glen Powell, Lewis Pullman, Monica Barbaro, Charles Parnell, Jay Ellis, Greg Tarzan Davis, and Manny Jacinto as the "rookies" that Mav has to teach. They're fun to watch but little of their story truly has impact. Once everyone gets up in the jets and starts in on the stunts, though, the film really (forgive the pun) flies. This is a film that's at it's best when its up in the air, doing whirling jet things. I don't care much about the story on the ground, and I doubt the people making it did much either. But man, if you want a fun to watch action aerial film, Top Gun: Maverick delivers. For many (to the tune of $1.489 Bil at the Box Office) that's really all that matters.