Come Sail Away with the Blue Cat People

Avatar: The Way of Water

When it came out in 2009, Jame Cameron's Avatar became a smash hit sensation like none other. Hell, it's still the highest-grossing film of all time, sitting at a cool $2.923 Bil gross (with a quick re-release to put it ahead of temporary title holder Avengers: Endgame. It made, in short, a stupid amount of money... and I absolutely didn't want to see it. Like, at all. I completely avoided it when it was originally out in theaters (in large part because there wasn't some iteration of this site going on at the time). Frankly, I didn't understand what all the fuss was about. 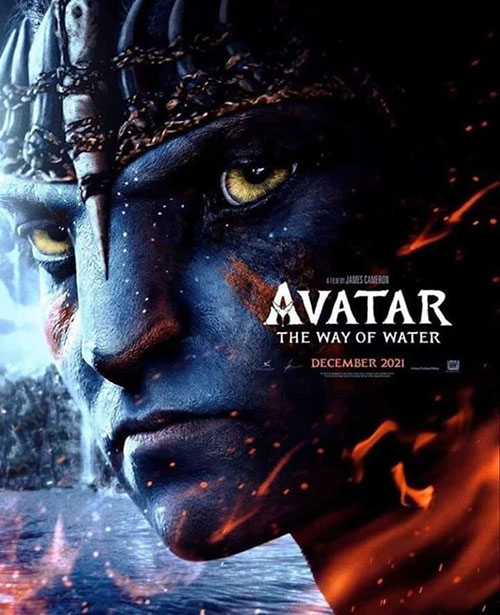 You could see it from the trailers: it was just Ferngully but with blue cat people. People went absolutely bonkers for the film but everything I saw, and read, and heard about it made it seem like a pretty mundane story with a ho-hum lead actor. I had a friend lend me a copy (forcibly, as in he brought it to my house and left it there without my permission) and I avoided watching it for a year (out of spite). When I finally watched it, nothing about the film convinced me of why this was an event I should have cared about. It was, indeed, Ferngully with blue cat people.

Now, don't get me wrong, the film was pretty. And the last act (of the nearly three hour runtime) is pretty epic. Everyone on this planet has clear evidence that James Cameron can direct the shit out of action. But when it came to story, and characters, and everything that actually makes a film watchable for me -- especially an epic film that clocked just shy of $3 Bil -- Avatar came up lacking. But it did make that massive amount of money, so studio 20th Century Fox was willing to throw a bunch of money, and all the time Cameron needed, at the director so he could put together however many sequels he wanted. The end result is Avatar: The Way of Water, the first of many sequels to come because, frankly, James Cameron knows how to print money and the bills all have the faces of blue cat people on them.

Avatar: The Way of Water is really three films stitched together into one long, three hour and twelve minute, bladder-testing epic. The movie picks up more than a decade after the first movie with human-in-a-Na'vi body Jake Sully (Sam Worthington), now the chief of the Omaticaya tribe of forest dwellers. He has three biological children with his wife Neytiri (Zoe Saldana): Neteyam (Jamie Flatters), Lo'ak (Britain Dalton), and Tuk (Trinity Jo-Li Bliss). These children are joined by adopted kids Kiri (Sigourney Weaver), Na'vi daughter of scientist Grace Augustine's avatar body (also played, in all forms, by Weaver), and human boy Spider (Jack Champion). They all live a peaceful existence after the defeat of the "Sky People" (the humans) years earlier. But then the humans come back, starting up the conflict once more.

One year after the return of the Sky People, the human colonists have decided that it's time to get rid of Sully once and for all. They revive former antagonist Colonel Miles Quaritch (Stephen Lang), and his crew, as avatars (seeing as how all these space marines died in the first film). Their job: kill Sully. This causes Jake and his family to flee the tree people and head out, across the ocean, to the sea people. There they learn the way of water (title drop) and find a new kind of peaceful existence away from the drums of war. But Quaritch wont be stopped and it's only a matter of time before the war will find the Sullys once more. 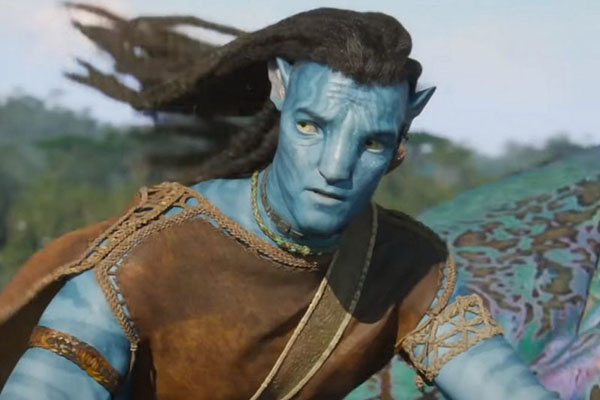 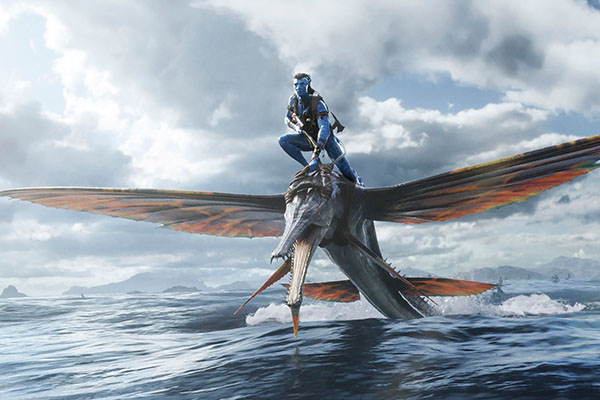 As I noted, this sequel is essentially three films. The first act follows Jake and Neytiri as they rule over the tree people. We get to see them live their lives, have children, and grow into a family unit. The film spends a lot of time (re)establishing everything we need to know after thirteen years away from the series, which isn't a bad idea considering. It's a slow first act, but I think a necessary one as it at least lets us learn all these new characters (the kids) and figure out who they are. Sure, they're simple characters -- Neteyam is the stoic older brother, Lo'ak the headstrong younger brother, Kiri the magical daughter with a connection to the planet, Spider the fun-loving human body that identifies as a Na'vi, and Tuk is, um, young -- but the film is effective enough in letting us know them.

A few early action scenes, which are effective in their own right, then set the stage for the second act where Jake and his family head to the sea land. The film then slows down, a ton, so we can learn about this new tribe and, essentially, rehash the beats of the first film all over again, but this time on the ocean. This is the act that probably could have been pared back the most, taking the hour-plus on screen and trimming it way back to, maybe, thirty minutes at most. We get a lot of story about these sea people, from Cliff Curtis as Chieftain Tonowari and Kate Winslet as Tonowari's wife Ronal, to all their people and their way of living, and it's not that this stuff isn't at times interesting, it just doesn't really have as much bearing as the story as Cameron probably thought. These people are simple stand-ins for the forest tribe, acting in the same capacity so Sully can take the lead and send them off to war.

That war is probably the best part of the film. Cameron shines when he's direction action and the third act has all the action you could ever want. We get chase sequences, fight sequences, war on the water, war on an aircraft carrier, and so much more. Cameron has a deft eye and an even more solid eye for action of all forms and the film burns through an hour-plus of runtime sending us through every action permutation the director can think of. Anyone wanting an action feast for the eyes will not be disappointed in the last act of the film.

With that said, you have to get through the first two acts of the film to get there. You mileage will vary here; I've seen some people complain Online that the first act is slow and painful, or that the second act is bad, or that the film doesn't find any magic until all the way in the last hour. I think there are solid elements in each part, maybe not enough to justify this whole runtime, but certainly enough to keep the film engaging through one watching. It's uneven and imperfect when it comes to its story, but then, it is Avatar. 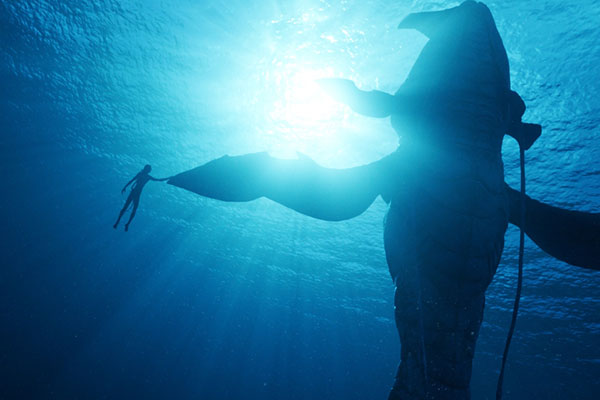 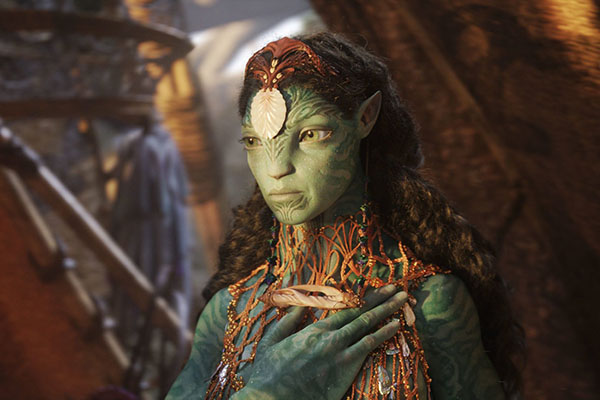 With all that said, what most people want out of the film is to be transported into the world of Pandora. In that regard it's hard to argue with Cameron's vision. The film is gorgeous, presenting a richly detailed world in the sky, on the ground, and especially in the water, all created in such convincing CGI that it'll make the special effects in everything else you see for the next few months look fake by comparison. Cameron says it took him thirteen years to make this sequel because the technology wasn't there to make it any quicker (and he had to invent most of it for this film). I don't doubt that considering how lush and rich this film looks. The story may be shallow but the movie looks as handsome as you'd expect. And for some people that will be enough.

For me that equated to a film that, while I dreaded seeing it in theaters, I found myself enjoying in the moment. I laughed, I got caught up in the action, and I found that I did, indeed, have a good time with Avatar: The Way of Water, at least in the moment. Now, a few hours later, I will note that I can think of some visuals I liked, certain scenes that were good, and a few action set-pieces that stunned. Most of the film, though, is a blur, forgettable as soon as it has rolled past. There wasn't enough that really stuck in my brain after the fact, and even less that would compel me to watch the film again. I liked it once, found it to be ten bucks decently spent, and now I can say I've seen it so I never have to see it again. It was fine. It was Avatar.

But here's the thing: Avatar made just shy of $3 Bil. If you were to have gone up ti James Cameron in 2009 and said, "hey, your movie is a pretty but shallow rehash of Ferngully and maybe you should try to make a better story and better characters," he would have looked at you and said, "I made three billion dollars." How do you argue with that? Did you make $3 Bil with a single film? I know I didn't. Now, with this sequel, in three weeks he's already made $1.4 Bil and will likely make much, much more. He has at least four more planned on Pandora, and all of them are likely going to make a couple of billion each. If you said to him, "I thought your sequel was overly long and lacking," he'd look at you and say, "I've already made four-point-four billion on Pandora," and he'd be right. These films are shallow, and lacking, but he's made a ton of money and clearly knows what works in this context.

I hated Avatar. I found Avatar: The Way of Water to be a improvement in every way, and quite watchable, but I wouldn't call it good. And yet, I haven't made $4.4 Bil with my ideas and James Cameron has so, whatever else I can say, I'm going to let the man have this one.