Mel Brooks is often lauded, quite fairly, as one of the great comedic minds of the 20th Century. He's produced some of the great parody films of the era, from the Universal MonstersThis franchise, started off with Dracula and Frankenstein in 1931, was a powerhouse of horror cinema for close to two decades, with many of the creatures continuing on in one-off movies years later. pastiche of Young Frankenstein to the history-spanning hilarity of History of the World, Part I, and the pretty solid Star WarsThe modern blockbuster: it's a concept so commonplace now we don't even think about the fact that before the end of the 1970s, this kind of movie -- huge spectacles, big action, massive budgets -- wasn't really made. That all changed, though, with Star Wars, a series of films that were big on spectacle (and even bigger on profits). A hero's journey set against a sci-fi backdrop, nothing like this series had ever really been done before, and then Hollywood was never the same. zinger Spaceballs. And thats to say nothing of the success he had producing films outside the comedy sphere, such as the absolutely amazing horror remake The Fly. He is, in short, a Hollywood legend. 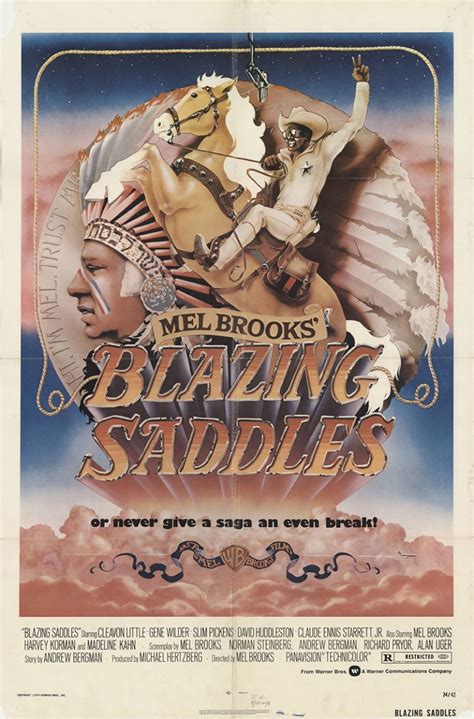 Although he found success before 1974, with his real breakout being The Producers, it's fair to say that he cemented is place among the comedy legends with the one two punch of Blazing Saddles and Young Frankenstein, both released that same year. I've gone on about the virtues of Young Frankenstein before (it's very good and very silly), but Blazing Saddles is its own beast. A Western parody that shows all the hallmarks of Brook's style, it was created in collaboration with writers Norman Steinberg, Andrew Bergman, Alan Uger, and Richard Pryor. The film is wacky and madcap but that's not really why it's remembered at that point. It also is often hailed as a film "you simply couldn't make today."

While I've never accepted that argument at face value -- while, sure, there are films that might get some people riled up if they were made now, the same could be said of any decade, at any time, often for the same kinds of films over and over -- I'd never actually watched the film all the way through before. Oh, I'd caught bits and pieces of it on YouTube (the farting scene, "excuse me while I whip this out," et al), but I'd never sat down to actually watch the film, not all the way through. To be able to say, from my perspective, if this film really would be hard to make now I felt like I had to really watch it. And, frankly, I don't see all the fuss.

Okay, sure, it makes a lot of racial jokes. Like, a lot of them. Racial slurs are thrown around, people comment quite clearly on the skin of other characters, and most of the motivations in the film come from "white vs. black" mentality. Certainly people in our current age would say, "these are topics we shouldn't touch now!" But then, someone is always going to rend their garments when confronted with things that make them uncomfortable. The racial humor in the film is both used in a historical context (as this is a film set in the Old West) and also with the goal of making people uncomfortable. The number of times the N-word is thrown around, purposefully to get a rise out of the audience, is enough that you'd likely lose count.

And it's not just the N-word thrown around. You'll get the F-word (the slur one) as well, especially in the last act of the film. This is a section I could see some being offended by as the film sets aside all of its racial humor for a fairly classless series of jokes against the gay community. While I wouldn't call this section mean-spirited it does toe the line pretty hard, all for a sequence that didn't even really need to be in the movie. Townspeople getting all racial about a Black sheriff coming to town makes sense in the context of the story. People getting all bigoted in a dance number thrown in as part of a series of fourth-wall breaks feels like it was just thrown in to get a rise for no reason. Context is key. 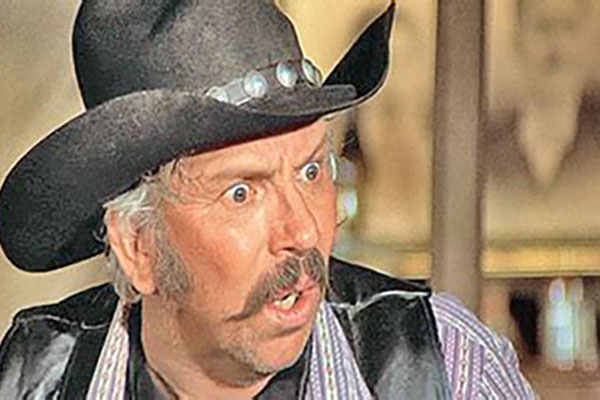 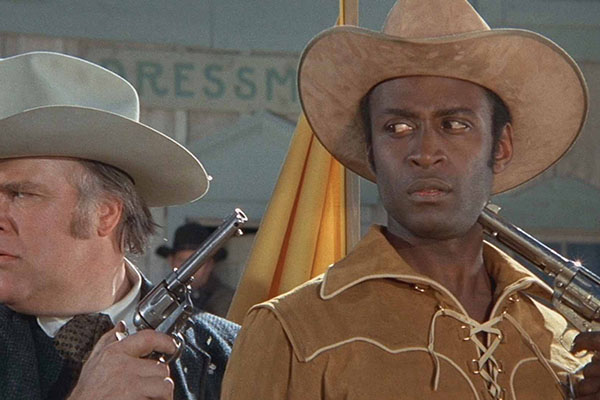 And while we're pointing out potentially offensive moments, one actor (Brooks himself) does don Red-face. He plays a Native American chief and part of the joke is that he can't even stick to the Native language, speaking everything else from Yiddish to Spanish, German, French, and more. It's funny, in its own way, and having the character start of with Yiddish helps to tone down how offensive the Red-face could seem. Still, that's something you know people would complain about simply because.

Thing is, though, that overall the film is pretty innocuous. Yes, the N-word gets thrown around a lot but it happens within the context of the setting and the time period. Of all the elements that I observed above, this is the one part I think should, and would, remain if someone tried to remake the film. The fourth-wall breaking last act would likely change anyway as this is a pure Mel Brooks flight of fancy and any other director would do something completely different. Having an actor in Red-face would also change mostly because this is a director self-insert character and I doubt Mel Brooks would headline a remake.

Naturally, then, we just have to focus on the story. Could this story be made today? Sure. A Black sheriff comes to a town, is confronted by racism and hate, and has to battle the townspeople every day just so he can do his job. That actually sounds like a pretty good flick, and you would absolutely want there to be all the hallmarks of hate and bigoted attitudes in that kind of story. The fact that Blazing Saddles plays it for laughs makes it all far more digestible, and I think that actually makes the argument that this film could be made now. A comedic version would be more like to work now than a dramatic version.

Of course, a version of the film was made recently: Paws of Fury: The Legend of Hank, an animated kids flick that uses the story of Blazing Saddles but ditches all the racial humor, which, really, what's the point then? Blazing Saddles works as well as it does because it's social commentary dressed up as a live-action cartoon. There's nothing real or serious about this film, with the comedy in the movie (outside the racism and political context) working at about the same level as Support Your Local Sheriff It's goofy and silly and fun, just with a little spike that makes you uncomfortable once in a while (which in turn, makes it even funnier). 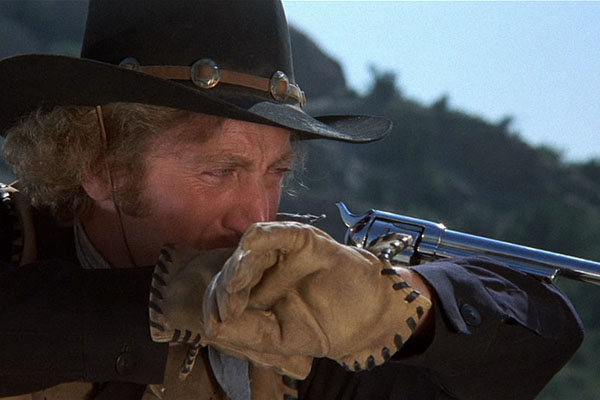 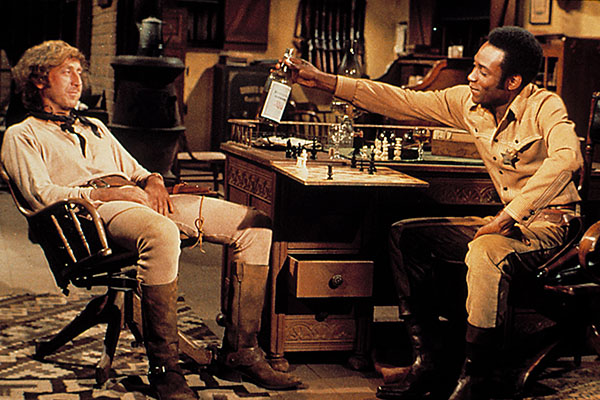 Could you make Blazing Saddles today? I don't see why not. If you could get a studio to sign off on making a parody of a Western, let alone just making a Western at all in an era where the Western isn't all that popular at all, then I don't see anything here that really would have to change. Maybe you handle the racial humor differently, but that would also come from the writers and director working on the picture and the way they use comedy in their films. It's entirely subjective, up to the creatives behind the scenes, and no two versions of Blazing Saddles would ever be the same.

The real question that seems to get muted or lost is whether a film like Blazing Saddles could even get conceptualized, as an original IP, today. This specific film is certainly of its era, as much because of who was working on it and the humor they threw around. There are plenty of parody films made now, offensive jokes and all in there. I think people hold this film up because of the very specific moment it caused and they want to wring their hands and say, "we're not allowed to make this kind of humor now." Which, that's stupid. As offensive as the language in Blazing Saddles may be, very rarely does it punch down. That's the key distinction right there; it's true that offensive humor doesn't always fly now, but that's because some comedians punch down. They make jokes at the expense of marginalized communities, not for them. That's what Blazing Saddles, by and large, gets right.

Blazing Saddles is a funny movie, and one that does still hold up even today. It's not perfect, and I think if it were to be made today some of the humor in the film would change (like that whole last act which does feel like it punches down). But to say a film like this couldn't be made today is patently absurd. Quit rending your garments and get your head out of your ass.