A Parody of a Parody

Al Yankovic has had a long and storied career. Coming up in the 1980s pop scene, making fun of all the music around his, "Weird" Al managed to cut out a niche for himself as the best, most successful, and most famous parody artist in music history. Sure, there have been others who have made parody music but few have the cultural cachet of Al. Famous musical acts use Al as their barometer for when they've "made it" in the industry; if Al parodies your song, you're a certified smash success. 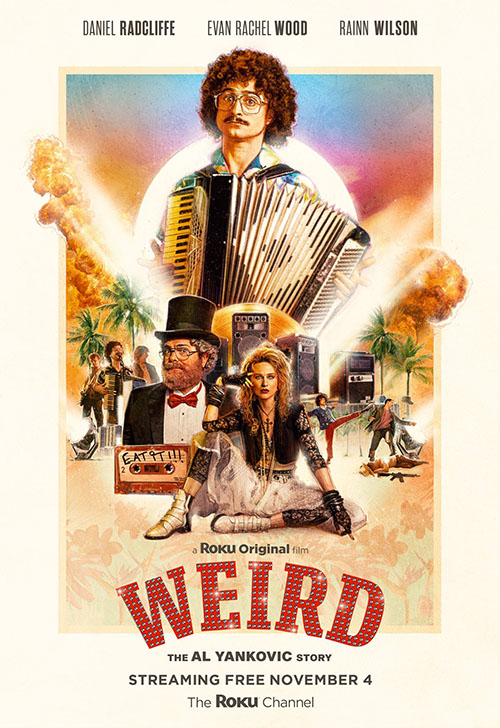 The one area where "Weird" Al has failed to bring his parody magic is on the big screen. His one and (up until 2022) only attempt as movie parody magic was UHF, a film that studio Orion Pictures expected to be the smash hit of the summer of 1989. And don't get me wrong, that movie is hilarious, a weird parody of movies that perfectly plays to the kind of bite-sized humor that Al is famous for. It's a series of sketches done in three minutes or less, all stitched together with a loose story and, deep down, it just works. It was not a rousing success, though, only bringing in $6.1 Mil against it's $5 Mil production budget, remaining one of the only misfires from the comedy legend. After that, it seemed like Yankovic would keep his comedy in musical (and TV occasionally) form and leave the big screen to other people.

Thirty-three years later, though, Al is back with another parody. This time, instead of parodying TV and film in general, Al set his sights on parodying his own life. Weird: The Al Yankovic Story is based on a Funny or Die skit of the same name. A long form adaptation of that skit, the film is directed by original skit creator Eric Appel and co-written by Appel and Yankovic, taking the material from that short and really drawing it out. And the thing is that the moments that hit in the film really hit; when it's funny it's really damn funny. The idea for it, though, may just have been better in short form, though, because the film has a lot of padding without many more jokes than you get from the original short.

The film is a (very, very) loose adaptation of Al's own life. By that I mean you can basically throw everything you know about Al out the window. Our young "Weird" one (played by Daniel Radcliffe, although Al the Narrator is voiced by Diedrich Bader, and younger versions of him are played by Richard Aaron Anderson and David Bloom) grows up in a house that doesn't appreciated his "weird" tendencies. His father, Nick (Toby Huss), hates Al's weirdness and especially hates that fact that Al has a growing fondness for accordions. After one particularly salacious polka party (with Al absolutely tearing it up on the keys), his father destroys his accordion, sending Al out on his own to find a way to make his mark on music.

Al eventually settles in with a group of guys -- Spencer Treat Clark as Steve Jay, Jack Lancaster as Jim "Kimo" West, and Tommy O'Brien as Jon "Bermuda" Schwartz -- who eventually reveal themselves to be the perfect backup band. But what really drives Al forward his his love of taking music and changing to words. This genius gift brings him the attention of Dr. Demento (Rainn Wilson), and soon Al's career takes off. He becomes famous, starts dating Madonna (Evan Rachel Wood), and even gains a fan in Pablo Escobar (Arturo Castro). But will all this fame and power go to Al's head? Will he follow the path of so many other musicians and become another drugged out, alcoholic wreck? 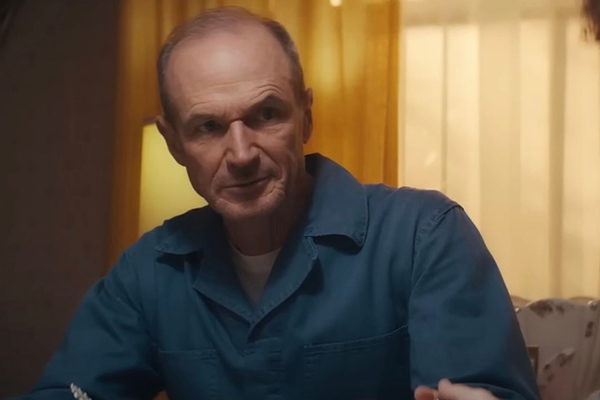 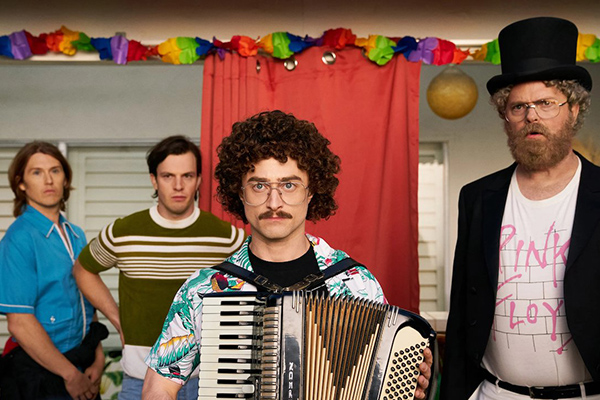 As I noted above, the best moments from the film do come, by and large, from the original sketch. There are jokes from that short that are reused in the film (which I didn't realize at the time as I watched the film first) and they're just as funny in the context of a longer film. These bits, along with a few choice moments later in the film -- his backup band only revealing themselves when Al is on stage because, up until then, "it didn't seem relevant"; his collection of platinum albums that he always wears around his neck -- lend the film some solid laughs.

The problem I had with the movie was that it felt like the jokes were few and far between. For me there weren't enough laughs in the film. Sure, there's humor, and some stuff to smile at, but as far as the film actually making me laugh in the way Al's music does when it's on (especially the first time you hear one of his tracks), the film just doesn't quite have that energy. It feels like at 108 minutes maybe a good ten or more should have been cut out to keep the pace up and get everything going faster to the actual jokes in the film.

Now, bear in mind that I went into this movie expecting a parody like UHF or maybe Airplane, something that just constantly assaults you with jokes as it tells a very loose story. Sometimes the film is able to do that (a late sequence with Al winning an award that then goes horribly off the rails nearly nails that kind of manic energy), but the kind of parody this movie is shooting for feels a little more controlled. It both wants to be a proper send up of music biopics while playing everything very straight. I think it might have gone a little too straight when it needed a little more weirdness, a little more mania.

It's worth noting that my wife had the opposite opinion all around. She found the first half of the film very, very funny, saying she had a grin of her face so big the whole time that it hurt. But when the film gets a little more over the top and more manic, especially at the end, that was when she started to lose interest. The film she wanted got lost in more and more jokes and she said the back half just didn't work for her the way the early part of the story did. Clearly, whichever way we came at it, something was missing from the movie. 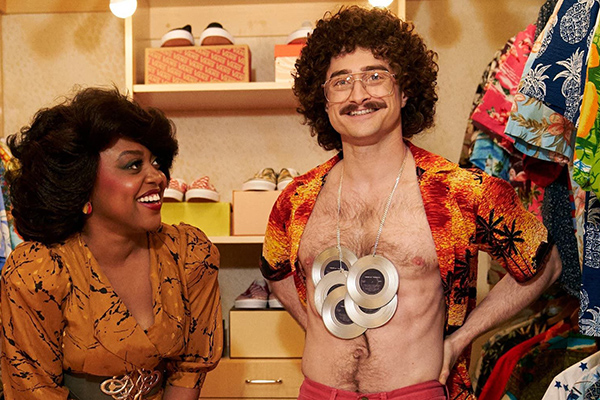 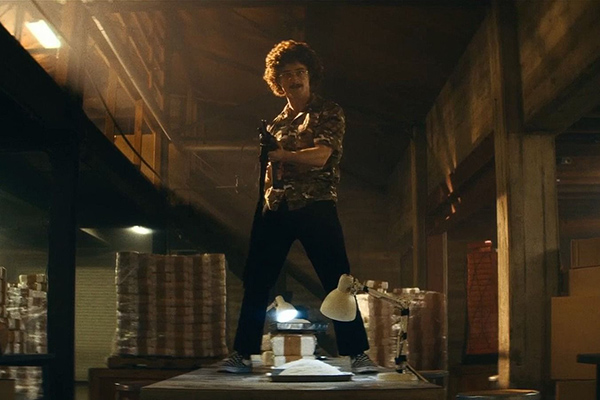 It's possible that this particular kernel of an idea really does work best as a sort-form fake trailer. Certainly that sketch is very funny and doesn't overstay its welcome at all. That's the kind of humor that's right within Al's wheelhouse (and he does feature in that fake trailer just like in the full-length film, playing a scummy music exec both times). Al clearly enjoyed that short and wanted to do more, but I don't know that this was the vehicle that really suited Al's return to the big screen (or the Roku channel, if that's where you're watching it).

In the 33 years since Al's last film his cachet as a parody artist has only grown. He's a brilliant and funny guy but, so far, it feels like he's had two misfires on the big screen. Both of his films have had great ideas but have been marred, one way or another, in their execution. With the right idea, and the right script, maybe Al could find a vehicle that works on the big screen. Or, maybe, music, music videos, and TV shows are the better medium for his quick and funny ideas. Whatever the case, Weird doesn't bring it the way I'd like from a parody movie, and that just seems like a waste. If you want to see this idea done right, maybe just stick to the original short.