Sony has, for years now, been working to get an adaptation of their hit video game series Uncharted off the ground. Pretty much since the first game in the series came out in 2007 and became a smash hit there have been rumors of a film floating around. Multiple directors were attached, and then left, constantly putting the film in limbo, not to mention all the various actors that were supposedly cast as the lead. Everyone Online was bucking to have Nathan Fillion take on the role of Nathan Drake, but that didn't happen. Sony just couldn't ever get all the pieces to line up. 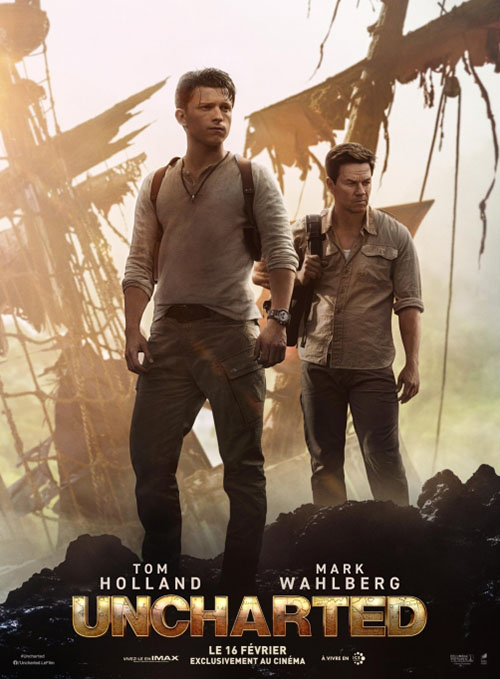 Finally, though, Sony got their wish as the studio was able to put out Uncharted, the film, in 2022. It was a Box Office success but a critical failure, getting generally bad reviews from those who wrote about it. So how did Sony pull off the feat of making a seemingly bad film that still brought in the goods? They went with famous faces as the leads, casting Tom Holland (your friendly neighborhood SpidermanSure, DC Comics has Batman, Superman, and Wonder Woman, but among the most popular superheroes stands a guy from Marvel Comics, a younger hero dressed in red and blue who shoots webs and sticks to walls. Introduced in the 1960s, Spider-Man has been a constant presence in comics and more, featured in movies regularly since his big screen debut in 2002.) and Mark Wahlberg (this generations Mel Gibson, the reigning Garbage King) to carry the film. That, plus a trailer that promised big action set pieces, was enough to bring asses in seats in early 2022.

Is Uncharted as bad as the reviewers said? Well, yes and no. It's a passably watchable movie with a few decently large set pieces that can get you absorbed in the action. There is some decent humor in the film (driven largely by Hollands constantly quipping Nathan Drake) and the film does manage a breezy enough energy that it never feels like it's bogged down and sloggy. That, plus this being one of he first big tent poles to come out once everyone emerged from their homes to go back to theaters (whether that was safe or not) meant Uncharted had a "right place, right formula" energy to it. It was, in essence, too big to fail... for a certain definition of "failure".

Thing is, had the film come out five or so years earlier, its $120 Mil budget against a Box Office performance of just over $00 Mil would probably have labeled the film a "disappointment". Bear in mind that films like Terminator: Genysis and Mad Max: Fury Road had similar budgets and debuted to similar numbers back in 2015 and those were considered "failures". COVID changed everything though, and while Uncharted didn't blow off the doors of multiplexes (not like Spider-man: No Way Home two months prior) it's numbers were solid in the post-COVID world. It's interesting how that works.

As for the film itself, eh, it's fine. We're introduced to Nathan Drake first as a child (and played by Tiernan Jones) living at an orphanage with his brother, Sam (Rudy Pankow), after their parents died under mysterious circumstances. They're caught trying to grab the Magellan Expedition map from a Boston museum and, as that was Sam's last strike, it gets the older brother kicked out of the orphanage, leaving Nate on his own. He gets postcards from his bro, but even those trail off after a few years, leaving Sam's fate unknown (although he was likely dead). 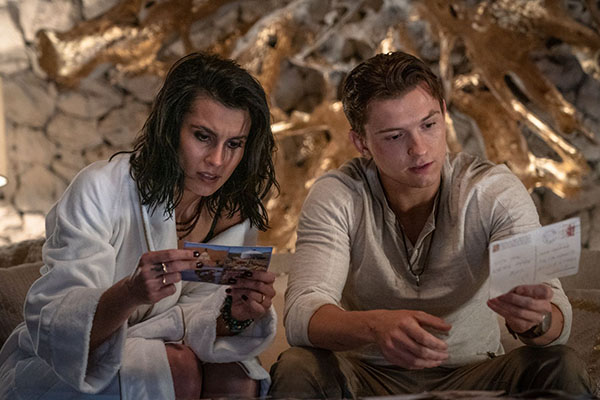 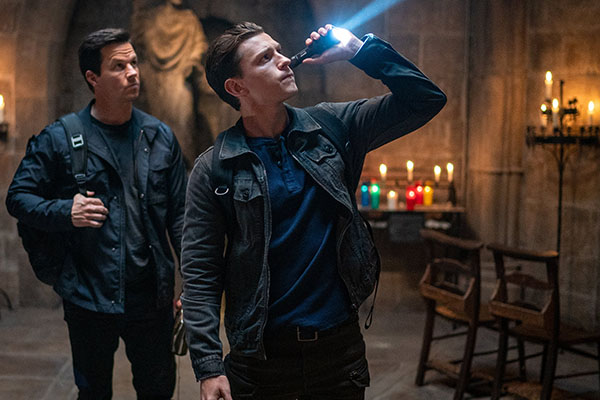 Years later the grown up Nate (Holland) works as a bartender and part-time petty thief. When an old acquaintance of Sam's, Sully (Wahlberg) introduces himself, the two end up joining forces to follow the train of clues from that same Magellan map. teaming up with another treasure hunter, Chloe Frazer (Sophia Ali), and working against ruthless scavenger Jo Braddock (Tati Gabrielle) and her team of goons, Sully and Drake have to find the ships and get the gold before anyone else.

I'm going to admit that I haven't really played the Uncharted games but I do have a passing familiarity with the world and characters within. Even with my meager knowledge I could tell something was off with this film, primarily because Holland's Drake doesn't act anything like the character from the games. Drake should have a slightly more grizzled aspect to him, a darkness behind his quips and barbs. There's a maturity to the character that Holland simply can't bring. Holland plays Drake like Peter Parker when the characters are very different.

Now, sure, defenders are going to say, "hey, this film is more of a prequel to the long-running series than an adaptation," which is fine in theory. When you're adapting a known property, though, you have to give people what they want. The name Uncharted means a certain kind of adventure with specific characters. When you change the way a character looks, acts, and sounds (like happened with Han Solo in Solo) then what you've made isn't really what people were coming in for. Those fans looking for an Uncharted movie didn't get what they were promised.

That's not just on Holland (who, in fairness, does what he can with the role he's given) but it also extends to the story and action as well. The games are a series of action set-pieces dotted with cut-scenes to tell the story. The film, by comparison, is the equivalent of a lot of talking scenes dotted with a few meager action set-pieces. And lest you say, "well you can't do that much action in a Hollywood movie," let me point your attention back to Fury Road again. The right story could have delivered the balance of action that Uncharted fans wanted. The film, though, spends so much time talking and explaining its story that I was wishing it could get back to the action. 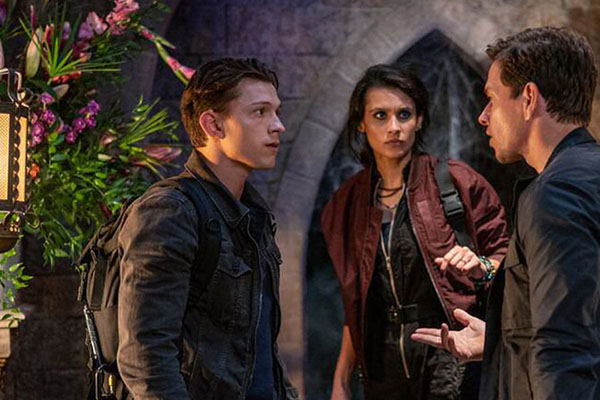 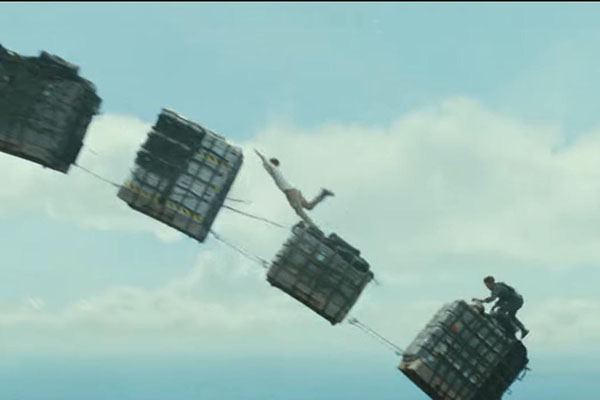 As for the story itself, it's a laughably bad treasure-hunting skit. Were told the heroes need two keys to unlock the treasure, but the keys don't actually lead to the gold (and Magellan's old ships), they just point to more clues, and more clues, and then more clues. In the end the treasure (which is substantial) is hidden out in a location anyone could (and should) have found in the last 700 years. The fact that it's just sitting there is the final, stupid capper on an increasingly idiotic series of clues all to amount to very little. All for what, a story that feels ripped from The Goonies? It's shockingly dumb.

Also laughably bad and dumb: Mark Wahlberg. I hate this man as an actor (and, frankly, as a person) but even tempering my expectations for him this time around (so I could review the movie fairly), Wahlberg still failed to deliver anything close to a good performance. He mutters and slurs all his lines, like he's just there to get a paycheck and doesn't actually care about anything being said. It got so bad that eventually I just had to turn on subtitles so I could understand anything he was saying. It's been a long time since I've seen this level of absolute disinterest in a film, and it's especially egregious considering the amount of money spent on this movie. Wahlberg's performance here is right up there with Tommy Wiseau in The Room.

All of this, then, amounts to a movie that desperately wants to be as good as the video games that begat this mess (let alone the Indiana Jones movies that obvious inspired all of it). Instead, though, we're left with the cinematic equivalent of a shrug. It exists, and you can kind of get through it if you shut your brain off and just enjoy Holland's jokes. But it's not a good movie by any measure; it's flat, it's bloated, and it misses the mark on everything it tries to do.

Worse, as for being an actual Uncharted film, this movie falls flat on its face. It might have made good Box Office this time around but I have to think that if, someone, a sequel is made audiences are going to get wise to just what they're being sold. Sadly that means we'll likely have to sit through another of these mediocre adventures.