Get Your Game Face On

Superheroes are big business. There is no doubt about that at this point, although the argument could really be made that Marvel's superheroes (and, even more specifically, those directly tied to the Marvel Cinematic UniverseWhen it first began in 2008 with a little film called Iron Man no one suspected the empire that would follow. Superhero movies in the past, especially those not featuring either Batman or Superman, were usually terrible. And yet, Iron Man would lead to a long series of successful films, launching the most successful cinema brand in history: the Marvel Cinematic Universe.) are big business and everyone else is struggling to keep up. The DC Extended UniverseStarted as DC Comics' answer to the MCU, the early films in the franchise stumbled out of the gates, often mired in grim-dark storytelling and the rushed need to get this franchise started. Eventually, though, the films began to even out, becoming better as they went along. Still, this franchise has a long way to go before it's true completion for Marvel's universe. saw some success for a little while before that tapered off, while no one else has managed to match Marvel's "let crap out another $1 Bil movie every few months" strategy. They all keep trying, though. 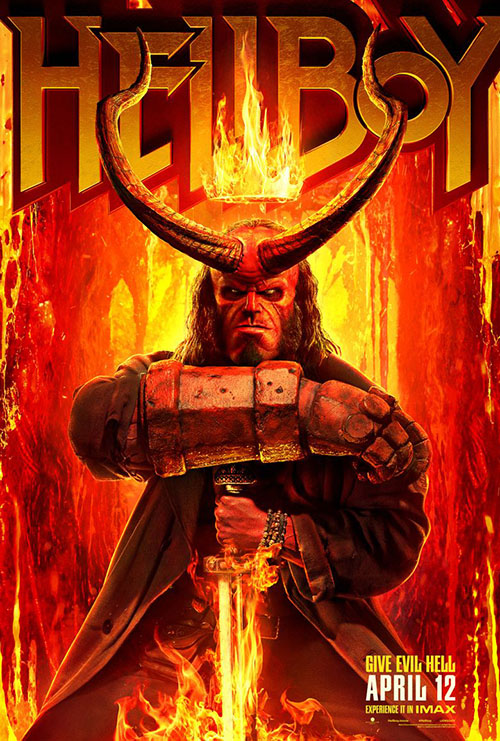 It's understandable why, after lying dormant for 11 years (after the release of Hellboy II: The Golden Army) Hellboy would come barreling back to the Silver Screen. His first two movies, while not spectacular successes, had made modest money at the Box Office which, coupled with home video sales, qualified them as something close to hits. Certainly there had been talk, off and on, for reuniting the production team behind the first two films so they could make a third movie (something director Guillermo Del Toro was enthusiastic about). Instead, though, a new team was put together to try and capitalizing on the fervor surrounding superheroes, and, thus, Hellboy 2019 was born.

Let's just start by noting that the film is a disaster, start to finish. This was an ill-conceived film with a mess of a plot, bad CGI, and threadbare characters, all slapped onto the screen to the disinterest of audiences. Hellboy isn't exactly a known quantity among most of the theatrical audience (lacking the cultural cachet of even AquamanRaised by his fully-human father, Arthur Curry has a history even he didn't know about until he grew: that he was the half-human, half-Atlantean son of the once-Queen of Atlantis, and was destined one day to be it's rightful ruler, the Aquaman., let alone BatmanOne of the longest running, consistently in-print superheroes ever (matched only by Superman and Wonder Woman), Batman has been a force in entertainment for nearly as long as there's been an entertainment industry. It only makes sense, then that he is also the most regularly adapted, and consistently successful, superhero to grace the Silver Screen. or SpidermanSure, DC Comics has Batman, Superman, and Wonder Woman, but among the most popular superheroes stands a guy from Marvel Comics, a younger hero dressed in red and blue who shoots webs and sticks to walls. Introduced in the 1960s, Spider-Man has been a constant presence in comics and more, featured in movies regularly since his big screen debut in 2002.). Most viewers wouldn't pay the character the time of day normally. That, coupled with the fact that actual fans of the characters had been hoping and praying for a true Hellboy III and this was not it. This was a movie released to audiences that wanted nothing to do with it from all sides.

Hurting the film even more was the fact that it was released in April 2019, right at the start of the pandemic when people simply stopping going to movies altogether. The film was originally slated to be released in the January dumping ground of 2019 (showing Lionsgate knew they had a stinker on their hands) but then, for some reason, the film was movies up into the start of the Superhero Season (which, at this point, stretches from April til November every year), and that coincided with the pandemic. It was one bad move after another that helped to ensure the $50 Mil film only made $55 Mil at the Box Office. That still feels like a lot considering just how bad this movie is, but that's also quite a loss (once you factor in non-budgetary items like advertising) for Lionsgate. Something tells me a Hellboy II won't be arriving for this film.

If we're being fair, not everything in this movie is total crap. The one thing the movie does right is it gives the lead role over to David Harbour. While no one can really match original Hellboy actor Ron Perlman (who, note, was still willing to come back for a third film in the series), Barbour does a good job of finding the grit and scuzziness, along with a fair bit of charisma, to play the titular character. He makes the mess of a film just about watchable even as stupid stuff goes on and it all amounts to not much of anything. Without Harbor this D+ film would be an absolute F (at least). 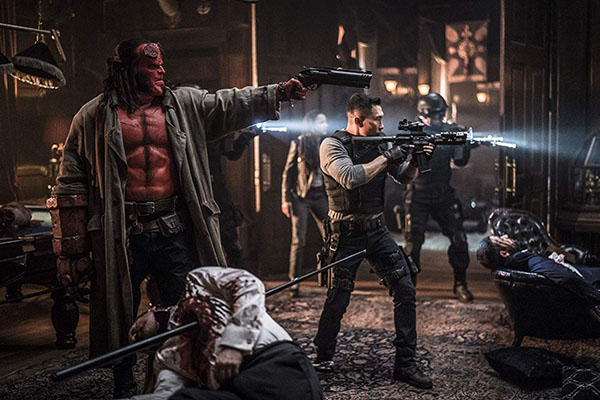 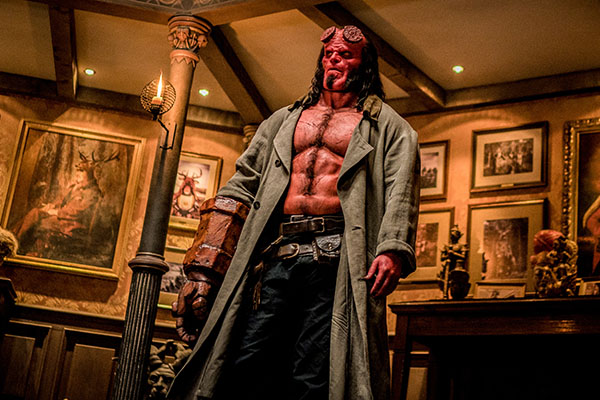 Outside of Harbour, though, there isn't really much to recommend this movie. The story is about how an evil witch, the Blood Queen Vivienne Nimue (Milla Jovovich), terrorized merry old England back in the day before she was killed and dismembered by King Arthur. Now, in the present, a weird pig-guy named Gruagach (voiced by Stephen Graham and performed by Douglas Tait) wants to get revenge on Hellboy (Harbour) for reasons so he decides to bring back the Blood Queen, put her bits together, and have her give him the power to destroy the hero.

What does any of this have to actually do with Hellboy? Well it seems that our son of the fires of Hell, who has been working as a hero fighting monsters for the BPRD, is prophesied to take the sword of King Arthur, Excalibur, and become the Blood Queen's King of Hell on Earth. This will raise an army of demons and will bring Hell to Earth, destroying it and casting all of humanity into the pit of Hell. Everyone wants to stop Hellboy from achieving his true power, while Hellboy just wants to stop Nimue because she's a bad person and that's his job.

Clocking in at two hours you'd think it'd be easy to fit in all that story, but Hellboy '19 takes a lot of narrative tangents, adding in side plots, side characters, and side stories that don't really add much to the proceedings. It creates an overstuffed story that barely has time to focus on its hero, or its villain, leaving both of them feeling like afterthoughts in their own movie. Nimue raising an army of Hell that Hellboy then has to fight would be awesome, but instead of getting them we see him fight giants and a pig-demon, and a lot of other dumb stuff, all while people tell us he's going to go bad and he has to be stopped. None of it connects.

A big issue the film has, that it never overcomes, is convincing us that somehow Hellboy really will become an evil King of Hell. We get he has the power to do so (if he touches Excalibur he pulls a now-flaming sword from the stone) but we never get why he'd do it. He was raised to be good, he has a loving (if surly and foul-mouthed) father (played by Ian McShane), and he fights on the side of good. Everything he does shows him to be a good person (despite being born from the pits of Hell). The film just assumes we'll accept it on faith that he'll go bad without ever showing us one bad thing he's ever done. 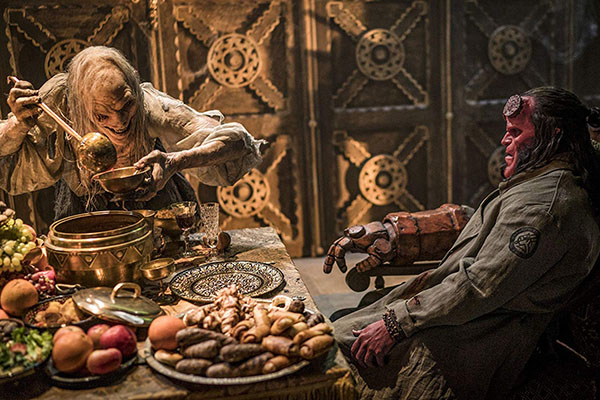 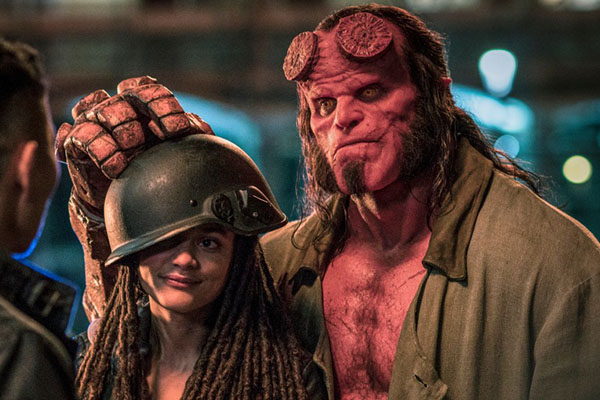 The film sure does love to tell us stuff, though. It'll tell us about a group of immortal demon fighters, giving us their whole backstory (right before they all die). It'll tell us the backstory of every single person that's in the BPRD (even when they don't matter). It'll give us the long parentage of Hellboy himself (which all it could have done was say, "hey, if you touch that sword bad things will happen"). It's a movie that just loves to tell us, instead of showing us, all the things that really matter. It talks at us for nearly two hours without anything of real consequence happening.

And then, when the film finally gets interesting, having Hellboy grab the sword so an army of demons (some very creatively designed demons, to be fair) come come to Earth... it then does nothing with it. "Oh, I have this sword?" Well, one slash and Nimue is dead and then the sword is put away, sending the demons back. There's no climactic face-off between Nimue and Hellboy, nor does he have to go out to fight all the demons he accidentally unleashed. It's all just washed away like it never happened, sanitary and clean. No harm, no foul, and no epic battles. It's a waste of the whole hour-fourty-five we spent getting to that point.

In short, Hellboy '19 is just a bad movie. It has a bad script that led to a bad production that then created a bad movie. Considering the pedigree of films to come from the character before, this was not the revival Hellboy needed. I don't hate that Lionsgate decided to make another Hellboy film. They would have been better off pulling Guillermo Del Toro back in, though, because what they created without him wasn't worth the effort.