Mutants But Not Mutants

Was Chris Evans always meant to play a superhero. Certainly it was inevitable as just about every actor in the known universe is going to get sucked in the Marvel machine eventually. Looked at from another perspective, though, Evans was more likely than most to get pulled (some might even say "pushed", heh) into the game. He played Johnny Strom in two terrible Fantastic Four films before eventually landing the role of Captain AmericaCreated by Simon and Kirby in 1941, Captain America was a super soldier created to fight Germany and the evil HYDRA. Then he was lost in the ice, only to be found and reborn decades later as the great symbol of the USA.. In between, though, he starred in Push, a movie about mutants (without using the term "mutants"). Clearly the man was destined for a gig in the genre (as Thanos would say, it was inevitable). 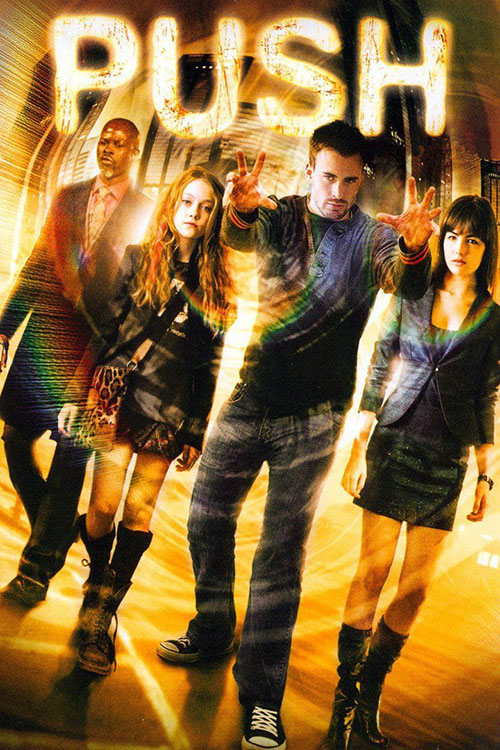 That being said, Push is probably the actors least interesting superhero role to date. While he clearly found the true blue core of Cap and managed to play that character better than any other actor could, and he certainly found an enjoyable, smarmy charm as Johnny Storm, none of that is on display in Push. This is a thoroughly mid-rate, B-movie superhero flick that doesn't know how to properly use an actor as charismatic as Evans, and it does the film a disservice. It's hard to imagine a superhero film where the man's magnetic charisma fails to come through, but all you have to do is watch Push to see it in action. Evans is wasted in this movie.

I don't want to make it sound like this film is bad, bear in mind. The late 2000s were rife with failed, off-brand superhero tales all trying to jump on the bandwagon of a genre that was only just hitting high gear after the release of Iron Man. Most of those movies were truly awful. (Anyone else out there remember Jumper?) Push isn't that bad, making up for a bland script and even blander direction with decent actors. None of them are well showcased in this film, but they do help to elevate it just enough to make the film watchable. It's not great, but it's not truly terrible either. It just... exists. Push is a film that exists.

In the movie (after a really long explanatory opening that really tells us way too much detail about the world for very little payoff) we're introduced to Nick Grant (Chris Evans). When Nick was a kid (and played by Colin Ford) he watched as his dad was killed by government agents working for "The Division" The goal of the Division is to capture, and use, mutants... I mean people with psychic abilities, turning these people into weapons. His dad sacrificed himself so Nick (who is "Pusher" could live, and ever since Nick has been on his own, moving from place to place, staying hidden and off the radar. He eventually ends up in Hong Kong, living in a crappy apartment while owning a ton of bad people a lot of money.

His world gets turned upside down when a girl, Cassie Holmes (Dakota Fanning), comes knocking at his door. Cassie is a seer who can predict (although not entirely well) the future and she knows that she has to work with Nick so they can both stay alive. The Division has their scent and they would like nothing more than to capture both of these gifted kids. And, more importantly, they expect that Nick and Cassie will run into Kira (Camilla Belle), a psychic girl who stole a vial of a very powerful new drug from the Division and is on her way to Hong Kong. If she and Nick and Cassie get together, and figure out a plan, then all the Divisions plans will be over. It very well could lead to war on the streets of Hong Kong. 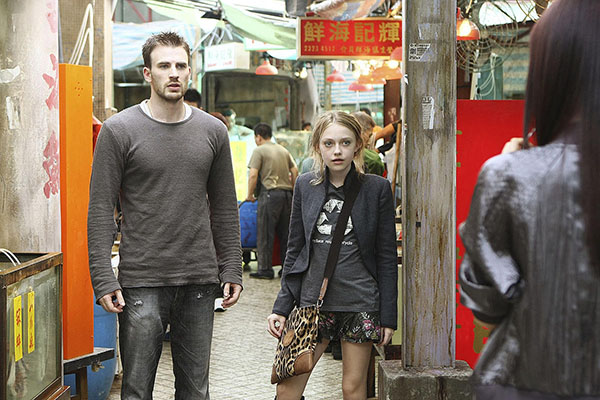 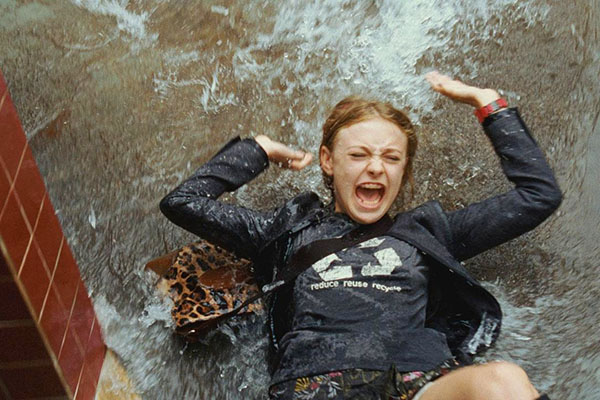 Push is, at its core, a low-budget, low-grade superhero film. On its own I wouldn't actually get down on the film for that; heck I find it kind of commendable at this point. When every superhero movie was have out now is made for at least $150 Mil with giant CGI effects slathered all over, it's kind of nice to see a film in the genre made for less than $40 Mil. This movie is able to convey its little world of not-mutants fighting against the government, and do it credibly and with decent effects for the time. You simply won't see a superhero film like this anymore and I respect that the effort was made at the time. Times were different back in 2009.

With all that being said, you can't help but think this movie would have been way different, and maybe a lot better, if it had come out even a couple of years later. Once Marvel figured out their house style in the Marvel Cinematic UniverseWhen it first began in 2008 with a little film called Iron Man no one suspected the empire that would follow. Superhero movies in the past, especially those not featuring either Batman or Superman, were usually terrible. And yet, Iron Man would lead to a long series of successful films, launching the most successful cinema brand in history: the Marvel Cinematic Universe. and started figuring out how that could work over and over again, a lot of other superhero films started picking up on the beats. None of them did it well but they all generally learned you had to put more humor, more style, and more substance into superhero films. For all its little ideas and detailed world-building, Push feels slight and empty. Worse, it's largely humorless making it a bit of a drag to get through.

In fairness, the actors do try their best. Evans is Evans and he can be charismatic even in a grainy and poorly filmed movie such as this. He doesn't have nearly the spark he could show in other films from this time (even Not Another Teen Movie had a better performance from the actor), but he does at least make Nick halfway compelling to watch. Him paired up with Dakota Fanning is a solid combo, and the two have a nice sibling-style chemistry that they just naturally fall into. Despite these two characters knowing nothing about each other, their team up does work.

What doesn't work is how generic this film feels. It has a plot stolen right out of the X-MenLaunched in 1963 and written by Stan Lee and Jack Kirby, the X-Men featured heroes distinctly different from those featured in the pages of DC Comics. Mutants who didn't ask for their powers (and very often didn't want them), these heroes, who constantly fought against humans who didn't want "muties" around, served as metaphors for oppression and racism. Their powerful stories would form this group into one of the most recognizable superhero teams in comics (and a successful series of movies as well). with camera work stolen from Jason BourneLost without his memory, but bearing a particular set of skills, Jason Bourne has to figure out who he is and just why everyone seems to want him dead.. If you ever wanted to show a film that perfectly encapsulated cinema at the end of the 2000s this would be it: B-list (for the time) actors paired with shaky cam direction and super-heroics without the name branding. All you need is a soundtrack from Kings of Leon and you could complete the set perfectly. It's that obvious and generic in its aspirations. 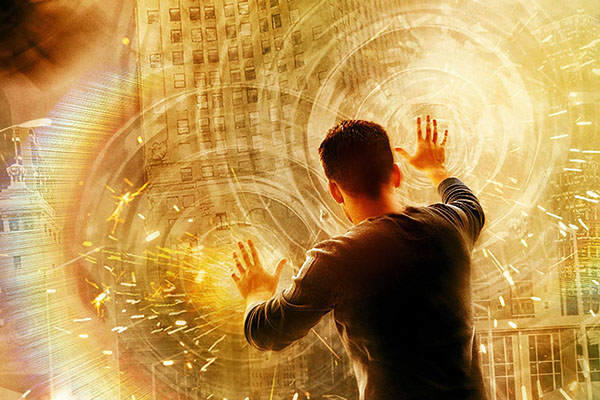 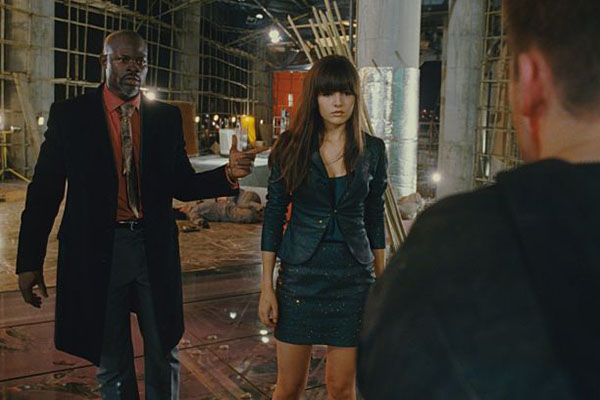 The movie truly works against itself. It has a ton of world building in it, dumping a long run of exposition over the opening credits, most of which we could either learn naturally in the film (and do) while the rest of the story never even comes up at all. Do we need to know that the Nazis experimented on these mutants? No, but the film decides to underline that point anyway despite Nazis never showing up again. From there things have to get told to us even though we then see the actions after. No one really feels natural or complete (outside of Nick and Cassie) and everyone is clearly there just to fill a role. It's cookie cutter writing 101 which just looks so bad in action.

Okay, with any other actors in the lead roles this would be a truly bad film. There are sparks, here or there, of creativity but not enough to really make the movie at all, and it's all dragged down by a mediocre production. The fact that it's watchable at all is a miracle. With different actors (such as Jumper lead Hayden Christensen) this would be an unwatchable mess. As it is this is a forgettable film that barely made any money at the Box Office ($49 Mil against a budget of $38) and you can see why.

Push was hobbled by a bad script and bad direction but, in the end, what it was truly hobbled by was coming out at the wrong time. In a different year (maybe 2012 or 2013) it could have had a slightly bigger budget and better crew attached to the film. It would have been tested and focused, honed to make a movie that would appeal to the masses. Yes, it would lose that low budget quality I respect but it would be a much more enjoyable film again. I'll trade the fun, B-grade production values for a movie I want to watch again and again. I respect the producers for making a film in the time period they did for as little as this movie cost. I just wish they could have actually turned out a good product instead of, well, Push.