We've looked at more than a few video game-to-movie adaptations on the site recently and a trend has certainly been clearly illustrated: Hollywood, by and large, doesn't understand how to adapt a story told via video games on the big screen. This isn't something you can chalk up to the 1990s alone (although the game movie produced back then were particularly terrible), but by and large movies based on video games suck. The few outliers (Resident Evil, Mortal Kombat) are appreciated more for how cheesy they are that for their "good" qualities (whatever those may be). A good video game adaptation, though, is hard to come by. 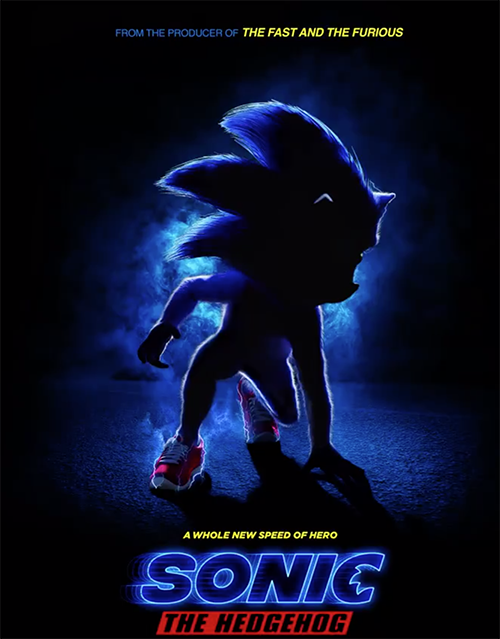 We've thought on this in our other reviews, but the sense seems to be that you can't just straight adapt what's on a video game screen to a movie as, well, that would be weird. At the same time, if you stray too far you run the risk of losing the essential elements that made the video games interesting (look no further than Super Mario Bros. for a movie that strayed way too far). It's a delicate balance, for sure, and it's one Hollywood absolutely sucks at. The showbiz machine seems to grind up video game ideas, tuning them into paste before spitting out something so far removed from the original games you have to wonder why they bothered. Finding the right mix of old and new, of taking what works and adding it to the conventions of Hollywood, it can be done with the right concept.

About the best video game adaptation we had, before 2020's Sonic the Hedgehog, was 2019's Pokemon: Detective Pickachu, a fun and light comedy about a boy and his pokemon, with special voice guest Ryan Reynolds. What worked about that movie is that it had fun with the concept. It didn't try too hard to stick to the source material (such that you needed scene after scene explaining everything to people that had never played the Detective Pickachu games), but it still honored the world around those games, setting up nice callbacks that enriched the experience. It tread a fine line and worked well, although really the best part of Reynolds doing his usual Reynolds thing with the material he was given.

Of note, this is basically the tack that Sonic the Hedgehog took coming to the big screen. Paramount's adaptation of Sega's flagship mascot series ignores a lot of the world around Sonic, instead dropping the Blue Blur into our world for a fun, fish out of water adventure. And powering the lead character is the voice work of comedian Ben Schwartz. I know there are fans of the games that felt like this movie strayed too far (see, it's a fine line), but this movie manages to entertain through comedy and fun action, all to create an enjoyable, goofy little movie. That makes it one of the best video game adaptations by a wide margin (and that's not even a backhanded compliment).

In the film we're introduced to Sonic (Schwartz), a blue hedgehog living in a lush, green world. Looked after by the owl Longclaw (Donna Jay Fulks), Sonic spent his days running around, as super-fast blue hedgies are wont to do. However, when a mysterious army of red echidnas come to his world, looking to do him harm, Longclaw send Sonic away (with a bag of warp rings) to find a new home where he can be safe. He ends up on Earth, on the outskirts of a small town, Green Hills, in the middle of Montana. He lives there for years, keeping an eye on the denizens and learning their lives but never being part of the town. 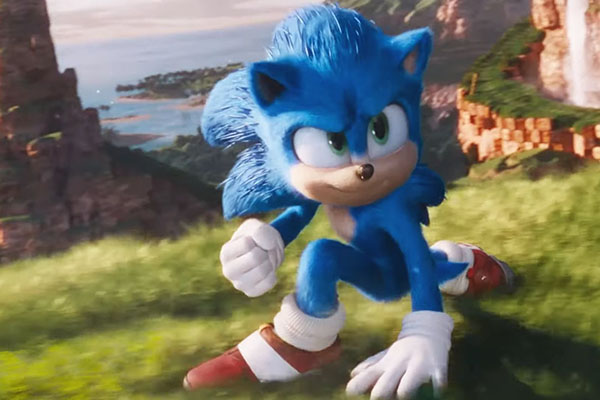 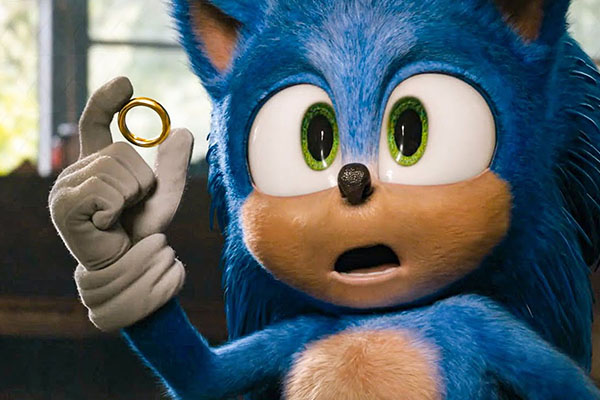 One day, however, Sonic ends up causing a black out in the town (he runs around way to fast, sending out a burst of energy). This draws the interest of a U.S. Government task force, led by the mad Dr. Robotnik (Jim Carrey), who want to find out what causes the power surge and how they can use it for their own means. This puts Sonic on the run, and he teams up with local sheriff Tom Wachowsk (James Marsden), because in the confusion over everything Sonic lost his rings (on a roof in San Francisco, as they're warp rings and there was a lot going on). Sonic and Tom have to get the rings, save the day, and stop Robotnik before the mad scientist gets too much power for his own good.

On the scale of Sonic projects 2020's Sonic the Hedgehog is certainly weird. Blending humans with Sonic characters had been done before (such as in the detested Sonic the Hedgehog '06), but it's not a common element of the series. Setting the events of the film on Earth is even weirder, and it makes for a movie that, for fans of the games, feels like it had to explain itself a little too much to get to the good stuff. Thus a prologue showing Sonic's old home, his venture to Earth, and all the rest.

That being said, once the film picks up with Sonic and Tom going on their buddy adventure cross-country, it does get really good. Part of that is because of the motor-mouthed patter of Schwartz; the voice actor does all he can to all life and comedy to the CGI character. But let's not downplay the contributions of Marsden as the actor is forced to play straight man to Sonic's antics, and it works. Marsden seems all too comfortable working opposite a CGI character, and the light, easy chemistry the two guys have (one real, one animated) carries the film. It's a solid blending and the best I've seen of this kind of interaction since Who Framed Roger Rabbit.

If there is a big flaw for me it's Jim Carrey as Robotnik. In all honestly I'm not sure what to do with the character since Robotnik, at least in the classic games, wasn't much of a presence. Get to the end of a stage, fight the only human on this world in one of his weird machines, and then do it again in the next level. Robotnik doesn't have a lot of character built around him (more than screaming in rage at every thing he does failing time and again), so I guess he's kind of a blank slate to build from. What Carrey did, though, really feels like the wrong direction for the character. 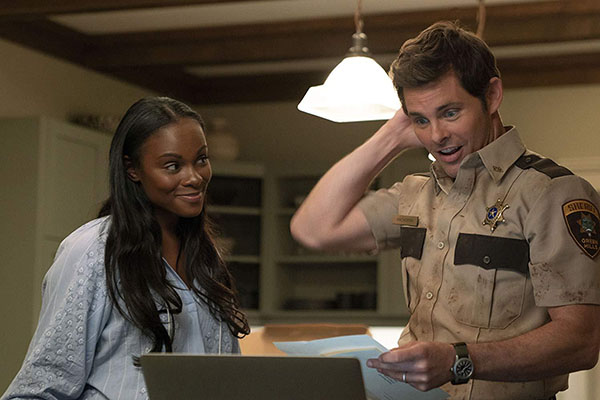 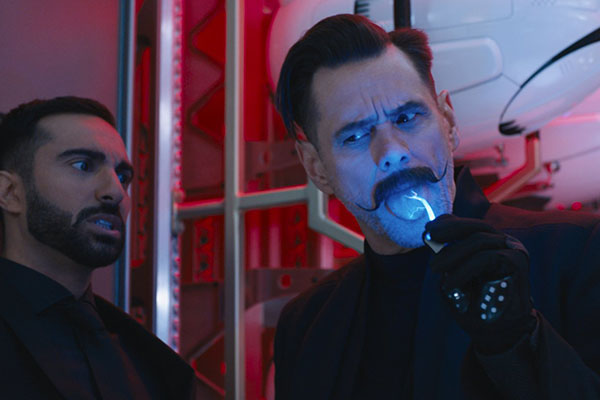 In interviews Carrey likened his Robotnik to his turn as the Riddler in Batman Forever and I can see that; his Riddler annoyed me in that movie and my god to Robotnik annoy me here. It's like he's channeling all his worst impulses from Ace Ventura and The Mask (movies I did like in their own right, but that's because the character works in context), applying them to a character that shouldn't be such a weird, live-action cartoon. It's distracting, making for the least interesting part of the film, by a wide margin. I'm sure Carrey's name attracted a bunch of audience members into the theater (and on streaming), but it just doesn't work for me.

And yet that doesn't really ruin the film. Robotnik is a presence but the film is really about Sonic and Tom, just being buds as they drive the great American countryside. The film mines lot of humor from their contrasts, as well as the jokes Schwartz makes. It's a great film in that regard, and the fact that it's based on a video game series doesn't do it any harm. Yes, the elements of the games are either distorted or changed to suit the means of the story, but it doesn't really hurt the film that much. As an alternate take on the Sonic mythos, one that finds the core of what works for the character (gotta go fast!) while actually telling a fun and enjoyable film, Sonic the Hedgehog actually delivers.

So I guess the lesson on how to make a good video game adaptation is to pair a CGI character (voiced by a solid comedian) with a human straight man and let the magic fly. Hollywood, take notice! I have your formula right there.