Throw Your Legs Up In the Air

Street Fighter: The Legend of Chun-Li

When people discuss bad video game-to-film adaptations, 1994's Street Fighter is held up as one of the worst ever in the genre. And, yes, it really is that bad (as we learned when we recently reviewed it). Even trying to be kind, going in knowing it bad and, in the attempt, trying to find something nice to say about that movie, it's hard to find anything redeeming about the movie. Now, though, I have something nice I can say: at least it's not Street Fighter: The Legend of Chun-Li. 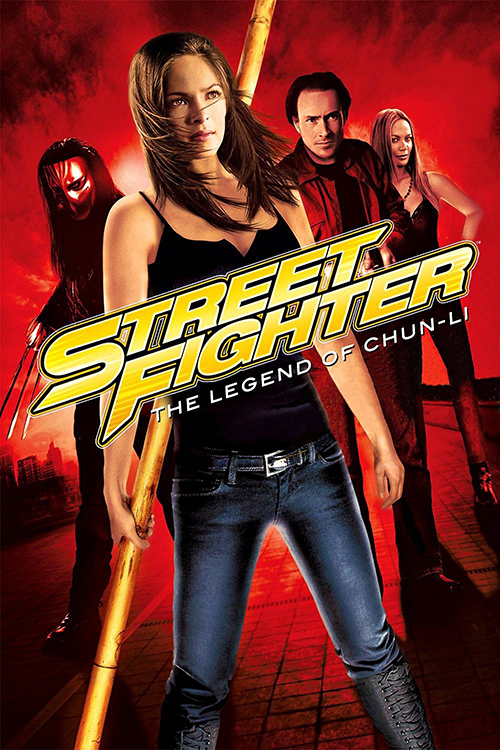 One would imagine when Capcom was plotting doing another licensed film adaptation of their biggest fighting franchise they would look at everything that filed the first time around and want to avoid those mistakes. And, in some ways they did: this is a smaller movie without the big, sprawling cast. And yet, in all the ways that actually matter this film is even worse than the previous attempt with the franchise. It's dumb, it changes too much about the characters, and it has action scenes that are neigh unwatchable. This film is so bad it basically misses the whole point of the Street Fighter altogether.

In the movie we watch as Chun-Li (played by Kristin Kreuk as an adult, Katherine Pemberton as a kid) grows up in California with her father and mother. Although she learns martial arts from her dad, she also learns to play the piano, becoming an accomplished concert pianist. Unfortunately for her happy childhood, he father is taken away by M. Bison (Neal McDonough) and his goon Balrog (Michael Clarke Duncan). When she grows to be an adult, though, she goes off in search of Bison and her father.

Her actions, as well as her kind heart, gain the attention of a mysterious martial artist, Gen (Robin Shou). With his training Chun-Li is able to become the fighter she was meant to be. Gen, who once was buddies with Bison, wants to see the gangster brought down, removed or killed so the world can be a safer place. Between these two world warriors the battle will be brought to Bison, but it's a question of if Bison can even be stopped or if this is one war Chun-Li can't win.

Although there's a lot we can rip apart here, and we will, I think the first thing we need to look at is the casting. While some actors were the right fit for their roles (mostly I'm thinking of Michael Clark Duncan as the hulking Balrog), it seems like most of the case was brought on because they were cheap and American. There's a distinct air of "white washing" to the film, led mostly by the one0quarter Chinese Kruek as our lead character. Obviously Chun-Li, who is a fully Chinese character in the games, was made half-Chinese in the film to suit Kruek's casting, but that doesn't really make it better. Meanwhile, actors like the very Irish McDonough for the Thai M. Bison, and Moon Bloodgood (who is of half Native American, half Korean descent) to play a Thai police inspector also seem equally bad. 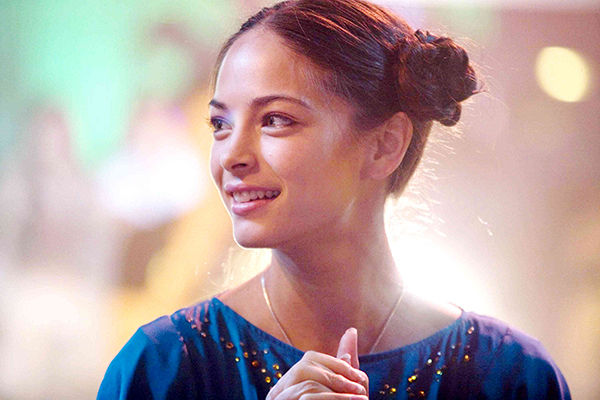 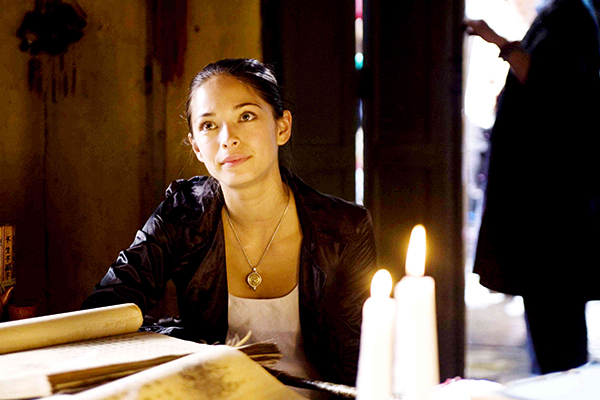 Changing the races, or using some actors of the wrong lineage, is bad enough but even the actors they chose really aren't that great. I've liked Moon Bloodgood in some stuff she's been in, but she keeps getting miscast into action rolls where here inability to act "tough" really holds her back. McDonough is a solid actor but he seems lost in the role of Bison, both acting too small for what should be a hulking character, and also putting on a terrible sounding Irish accent. That part is actually surprising considering his parents are both from Ireland, but his accent comes and goes and never sound natural.

Worse is the casting of Chris Klein as Interpol Agent Charlie Nash. Along with the change making Charlie a Interpol and not an American military agent is one thing, but then Klein is just so bad in the role. He overacts the parts that should be underplayed, gives no conviction to the parts that should have a big performance, and never seems like a guy that should be out in the field leading an Interpol investigation. And yet even he isn't as bad Kruek for so many reasons.

Kruek, let's be clear, was probably the worst person they could cast for this role. Although I'm not here to body shame the actress she absolutely doesn't have the right body to play Chun-Li. The fighter, as shown in the movies, battles with her legs. She should be all leg, with muscles bulging as she beats men around the street with her thighs. Kruek is a thin and twiggy woman who, while game to try to do her own stunts (with wire work and green screen, naturally) doesn't have the body type to resemble Chun-Li, nor does she have to flexibility to pull off any of the fighter's moves. Mostly she punches dudes, and the one time she tries to do Chun-Li's Spinning Bird Kick is laughable at best.

This is to say nothing of the fact that she's also a terrible actress in this movie. She doesn't have the ability to act tough, so her version of Chun-Li, who should be on a quest for revenge for her father, is simply lost in a daze most of the time. She's too nice, too meek, and simply unable to embody anything that Chun-Li should be here. The woman Kruek needs to be never appears and, instead, Chun-Li ends up being a vacant void in her own movie, despite not only being the lead but also showing up in every scene. It's astoundingly bad. 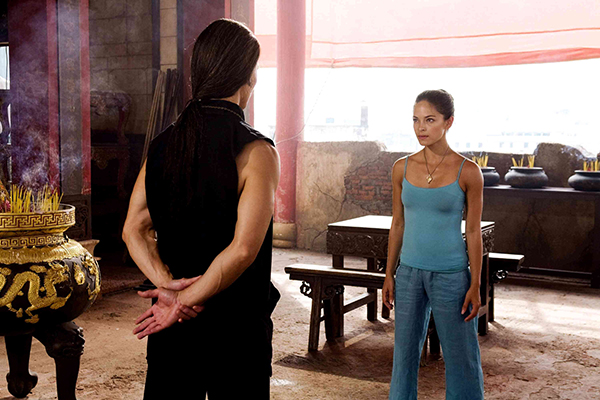 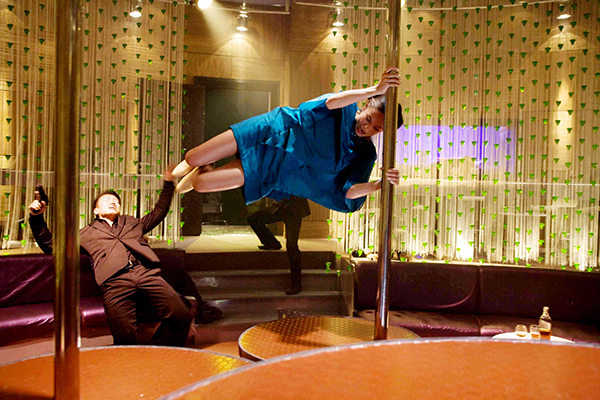 I do have to wonder, though, why so much of Chun-Li's story was changed. Why make her a pianist, a plot detail that, once she goes on her quest for revenge, is hardly ever mentioned again. Why introduce some other police inspector, Sunee, when Chun-Li is supposed to be a detective. Shouldn't Chun-Li be able to handle her own investigation? While bring in Charlie and Sunee when this is a role Chun-Li would have been perfect for? In essence, why reduce what Chun-Li could do in a movie tailor written to handle her exact storylines.

I have to think all these changes -- setting and character -- were made because someone cast Kruek in the role and had to drastically retool the movie to suit her. Kruek looked too young to be a cop so they made her a pianist and the parts of her story that would have related to her being a cop were given to the new Sunee character (who, bear in mind, barely has anything to do and clearly was just tacked on last minute). A Chinese actress, who could fight (and had the flexibility to do it with her legs properly) was called for in this role, not the actress from Smallville, and this one casting decision drags down so much of the movie.

Kruek's inability to actually fight also bogs down the action. The stunt coordinator had their work cut out with her and they barely get her up to doing passable punches (which, frankly, are still way too slow). Anything dynamic or interesting she has to do had to be carried out in a series of cuts to cover for the fact that Kruek (and most of the other actors around her) can't actually fight properly. The only good warrior here is Shou, and I just feel sad this guy is always stuck in bad video game movies (he went from Mortal Kombat: Annihilation to DOA: Dead or Alive to this, the poor man). The rest of the fighting here just sucks.

I just don't understand any of the thinking here. Everyone saw how bad the 1994 movie was, how poorly it was received, and yet instead of saying, "hey, you know how the acting and fighting and story were all bad in that movie? Let's not do that again," they doubled down. The 1994 movie was quaint and dumb but I enjoyed it (at least until it's last act) for it's cheesy stupidity. It's hard to say the same for The Legend of Chun-Li because there's nothing enjoyable about this film. It's a long, slow, boring slog with nothing redeeming about it at all. Maybe Mystery Science Theater 3000First aired on the independent TV network KTMA, Mystery Science Theater 3000 grew in popularity when it moved to Comedy Central. Spoofing bad movies, the gang on the show watch the flicks and make jokes about them, entertaining its audience with the same kind of shtick many movies watchers provided on their own (just usually not as funny as the MST3K guys could provide). It became an indelible part of the entertainment landscape from there, and lives on today on Netflix. could do something good with this, but I think the rest of us should avoid it at all costs.