A while ago I watched the 2017 TV Movie The Saint, and I really wish I'd been updating this website at the time because it's the perfect kind of cheesy fodder for our reviews: a misguided attempt at relaunching a classic property with just enough that it did right that it was actually worth discussing it. At some point I have to go back and find that flick again, but until them we can tide ourselves over with the 1997 version of The Saint, which was a different attempt at relaunching that classic franchise. 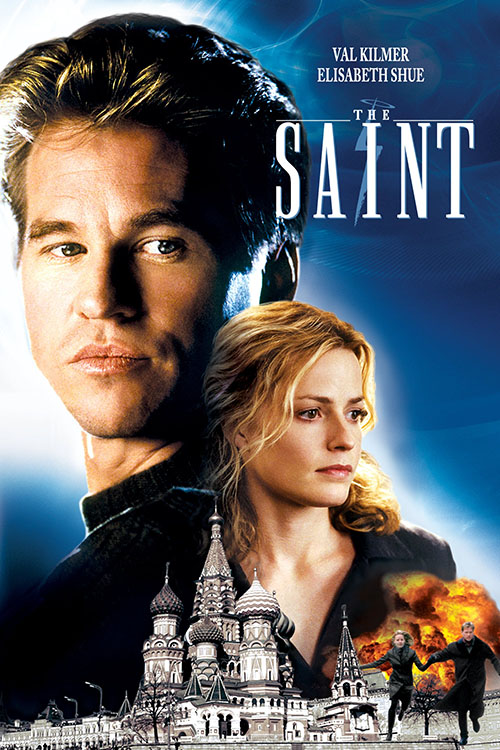 For those unfamiliar, the Saint is Simon Templar, a fictional character who appeared in a series of novels, as well as radio shows, TV shows, and movies. The character is Robin Hood-like, stealing from those the deserve it and using that money to right the wrongs the bad guys committed. He has his own host of gadgets, his own team of people, and it's all very Mission: ImpossibleIntroduced in 1966, the original Mission: Impossible featured a team of agents (with varying skills) heading out into the field to solve puzzle-box like cases on a weekly basis. This simple concept spawned a long-running series, a second series in the 1980s, and a hugely successful movie franchise starring Tom Cruise that continues today., just without Tom Cruise in any capacity. Honestly, were Tom Cruise not already in the Mission: Impossible series, The Saint seems like it would be his perfect role. Cocky guy that gets to parade around and perform daring missions is just the kind of thing Cruise loves to do in his films.

Instead, the 1997 Saint stars Val Kilmer, and frankly he, too, seems like he's having a devil of a good time here. Because Simon is a master of disguise as well as an expert thief, Kilmer gets to put on all kinds of costumes, affecting all kinds of accents, while he parades around as any host of characters. Although not everyone warmed to his role in this film (and he was nominated for a Golden Raspberry for it), he at least seemed to enjoy his time as the Saint... as did audiences as this film was a pretty solid seller, making $169 Mil at the Box office (off a $68 Mil budget), and reportedly generating plenty of movie sales after the fact.

Thing is, though, that it's not really a great movie now, thirty years later. It's silly, implausible, and has a giant scientific do-dad as its primary plot device that, even now, seems like a silly pipe dream: cold fusion. Sure, maybe one day cold fusion will be a thing (it's the kind of development that's always "10 years away"), but it also really dates this film. It's right up there with the Keanu Reeves vehicle Chain Reaction (released the previous year) for expecting cold fusion to be a sudden thing. It wasn't, and wow is it hard to believe everyone talking about it in this movie.

In the film our hero, Templar (Kilmer) is called in my a Russian oligarch, Ivan Petrovich Tretiak (Rade Serbedzija) after, in a previous scene, Templar stole a powerful microchip right out from under Tretiak's nose, easily escaping despite being pursued by Tretiak's goons. Recognizing the skill Templar has, Tretiak tracks him down and hires our Saint (who doesn't yet have that name) to steal a powerful bit of tech: the secret of cold fusion. It seems that an American physicist, Dr. Emma Russell (Elisabeth Shue), has figured out the formula to make cold fusion work, and Tretiak wants it so he can have it for Russia and make himself the most powerful man in the country. And, for $5 Mil, Templar agrees. 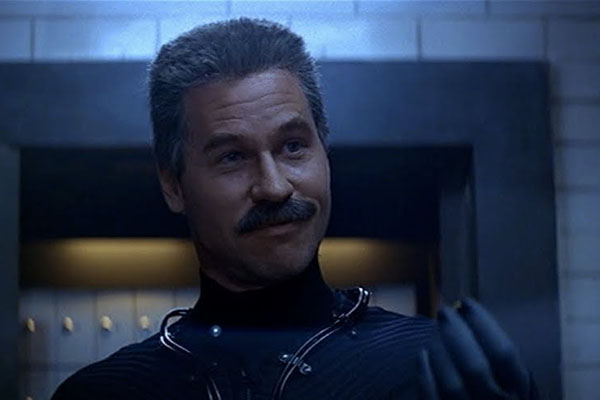 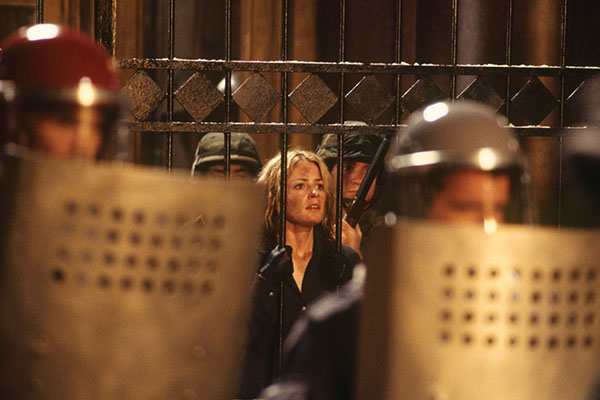 What he didn't expect, upon meeting Dr. Russell, was that he'd fall for her. A sweet, lovely person when they meet and Templar almost immediately tries to get out of the deal. Tretiak doubles his price, though, and adds a threat upon Emma's life of the Saint doesn't follow through on the deal. Sadly, even after getting the formula for Tretiak, the oligarch double crosses them, kidnapping our Saint and Emma, which, after they escape, puts them on the run from Russian agents deep in the heart of that country. It'll take all of the Saint's cunning and skills to get both of them out of this mess and keep the true secret of cold fusion out of Tretiak's hands.

So there are things that work about The Saint and there are bits that done, but the thing that probably works the least is the whole plot of the story. Tretiak wants the formula but upon learning that the formula is incomplete without Emma he has her kidnapped as well. Frankly, if it was that easy to get his hands on Emma he should have just started with that and skipped right past needing Templar. Yes, the film makes it clear that he wants his revenge against our Saint, but putting the two together only led, expectedly, to Emma and Templar teaming up and Simon repeatedly coming to her aid. If Tretiak had just kidnapped Emma and kept Templar out of it he likely would have had all that he wanted without anyone interfering.

Frankly the oligarch doesn't really work well as a character, either. Tretiak is a foaming at the mouth villain but the film doesn't really give him any time to actually play it up, to be a proper villain that can match wits with Templar. It felt like they wanted Tretiak to be a true James BondThe world's most famous secret agent, James Bond has starred not only in dozens of books but also one of the most famous, and certainly the longest running, film franchises of all time. villain but didn't quite have the right cast, or story, for him to really work. He comes across less like a true villain than just a petulant child demanding, "I want it now," and getting angry when his goons don't get him his prize.

Kilmer is better, and he's certainly the reason to watch the movie. Yes, his performance is a little over the top, and not all the accents he tries really work. With him in the lead the movie does, in fact, come across like a riff on Top Secret (the Val Kilmer-starring parody film) and not a even marginally serious action flick, but it is fun to watch Kilmer riff and charm his way through all the scenes as, again, the actor is clearly enjoying himself. Tonally it might be off but functionally it does work in the context of the film. 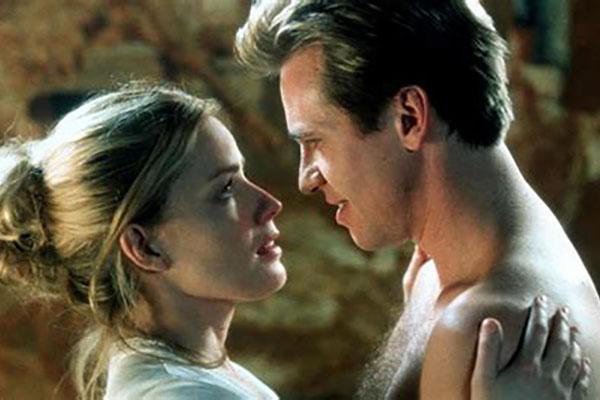 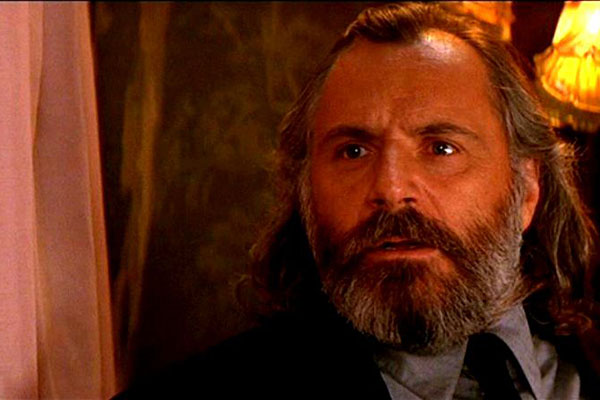 I feel bad for poor Elizabeth Shue, though, as her character is severely underwritten. The writers of the movie clearly knew the term "cold fusion" and just riffed up some science to justify it, but there's barely anything for Shue's character to actually talk about so even though the tech is supposed to be ready in this film it still feels like a pipe dream. And then her character gets stuck in the hapless love interest role and any of her character's presumed smarts or skills are set aside. She could use her brains to get the two of them out of situations so she could prove to be an equal to the Saint, but the film doesn't have time for that.

Really, how much you enjoy this film will be based entirely on how much you can tolerate Kilmer's shtick here. If you enjoy his performance you'll have fun watching him glide his way through a low-grade, Euro-trash Mission: Impossible. The story isn't there and the science is laughable, but Kilmer is the main draw and that is nearly enough to carry the film all on its own.