When we discussed the 2004 Punisher we discussed how troubling the character really seems. The character long outlived the era that birthed him -- the 1970s boom of exploitation revenge flicks -- and the world has changed a lot since then. All superheros are effectively vigilantes (except for the few that are somehow government sanctioned in one form or another), but the Punisher is especially troubling since he not only kills without mercy but also that his form of "justice" has been embraced by real-world authority figures. While there's a certain glee to be had in seeing someone level bloody justice against those who wronged him no one in authority, especially not law enforcement, should embrace anything the Punisher has to say. 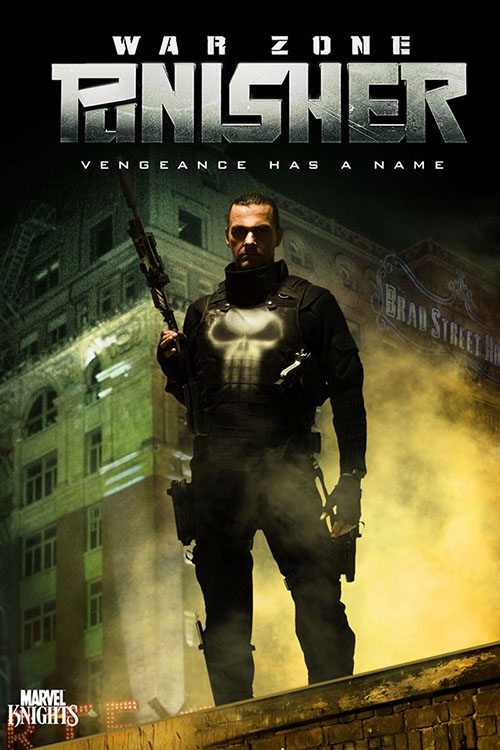 While the first film largely tried to dodge that issue by crafting Frank Castle into a family friendly character of a sort (which really didn't work at all well for he character), the next film to attempt to adapt the character, 2008's Punisher: War Zone instead tried to embrace Frank's harder edges. This is a vastly more violent and more bloody affair than the 2004 film, which I'm sure pleased a lot of the comic character's fans. But in the process the film runs smack into the major issues the character also faces: namely that cops should not ever embrace Frank. On that front, along with a number of other facets, this film completely whiffs it, making this film strangely worse than the cinematic adaptations that came before.

The film finds Frank Castle (now played in this reboot of the franchise by Ray Stevenson) working to take down the whole of the Russoti family. Stalking them on the night the whole crime family has gathered at the mansion of their elder leader, Frank goes in and takes out practically the whole family, all except for younger boss, Billy Russoti (Dominic West). Billy flees, heading to his own little base by the docks, but even that doesn't help him; Frank arrived and blows away every one of his goons he can find, even going so far as dropping Billy into a vat of glass shards and watching as the man is shredded by the glass.

Unfortunately for Frank a couple of issues come from this assault on Billy. For one, he accidentally killed an undercover FBI agent, Nicky Donatelli (Romano Orzari), who'd been working in Billy's gang as a way to take the crime boss down. Worse, Billy, despite being shredded on the outside, somehow survived the vat of glass and now wants revenge. He breaks his insane brother, Loony Bin Jim (Doug Hutchison), out of the asylum holding him and the two plot bloody revenge against Frank, as well as against Nicky's family (once they discover the betrayal). Now Frank has to protect Nicky's wife, Angela (Julie Benz), and their daughter before Billy and Jimmy come to exact their bloody revenge.

There are a number of problems with Punisher: War Zone, and we'll get to them in a moment, but the one thing I do think the film got absolutely right was its depiction of Frank. Where other superheroes are quippy and comical (to befit their "comic book" aesthetic), Frank here is a grounded, flawed man. He dresses the part (in full body armor and lots of guns, draped all in black) and the film never strays from showing Frank as a quiet and stoic man. He lost his family months before and he's never recovered, with the grief hollowing him out. Ray Stevenson gives us that full performance, and while he seems perfectly comfortable as the one-man stunt show that is Frank's action set-pieces, he's just as good as the depressed family man without a family. I felt like this part of the film was perfectly nailed. 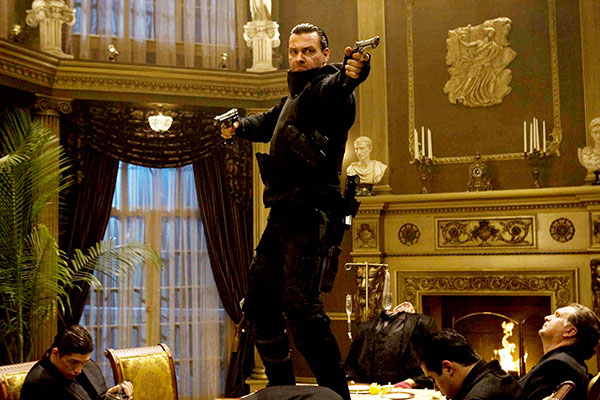 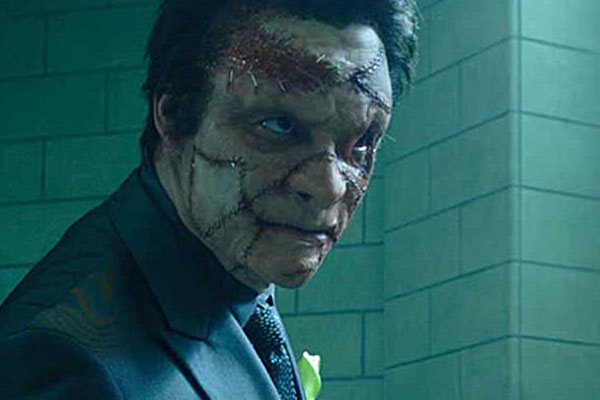 What fails in Punisher: War Zone is everything else, top to bottom. Where Stevenson is perfectly cast as Frank, Dominic West and Doug Hutchison are absolutely miscast as Billy and Jimmy (respectively). Billy "Jigsaw" Russoti and his brother Loony Bin Jim feel like characters out of a Dick Tracy comic. Their depiction in the film harshly contrasts with Ray's much more subdued performance; Frank here needs a dark and gritty villain to match his own style, not some over-the-top, cartoonish creature that walked off a Tim Burton production, except that's exactly what we got.

There could be some joy in these villains (and the aesthetic they bring with) if they were played well, but West and Hutchison both struggle with chewing enough scenery to make their characters fun. These actors either needed to be much more subdued, playing proper psychos, or they had to go so over-the-top that Jack Nicholson's Joker and Danny DeVito's Penguin would say, "hey man, dial it back a bit there." Instead we get this wavering performance where the actors can quite commit to the bit even as they spout off lines that were clearly written to make them into cartoon characters. As villains, these two suck.

But then, outside of Frank the film really doesn't know what to do with anyone. Angela Donatelli understandably hates Frank the first time she sees him because, of course, he killed her husband. But then, the second time he shows up it's to protect her from Jigsaw and Looney Bin and, suddenly, she's part of "Team Frank." It's one thing to grudgingly let this man help her to protect his child, but in the span of half a day she's completely forgiven him for killing her husband, even calling him "a necessity" for the city. That also goes for the FBI agent assigned to bring Frank in, Paul Budiansky (Colin Salmon). Budiansky absolutely wants to nail Frank for killing his partner, but then one gun fight later and suddenly the FBI is on board with this violent vigilante running around. He might have protected Donatelli's wife but that shouldn't change what Frank did, and yet...

Worse, though, is that every other cop in the film is one hundred percent on board with Frank and his one-man war on crime. That comes from the Chief of Police on down as every single cop either turns a blind eye to Frank's activities or even actively aids and abets the Punisher. More than one cop states that Frank, "does what's necessary. He does what we dream of doing." That, right there, is a troubling perspective for authority figures to have. Yes, this film is fictional, but when a movie like this depicts all the police as supporting Frank, saying they want to do what he does, and then the film lets Frank skate without any punishment at all, going so far as to call him "necessary", then it's no wonder why we see police walking around with the Punisher symbol on their cars and uniforms. This film made it okay. 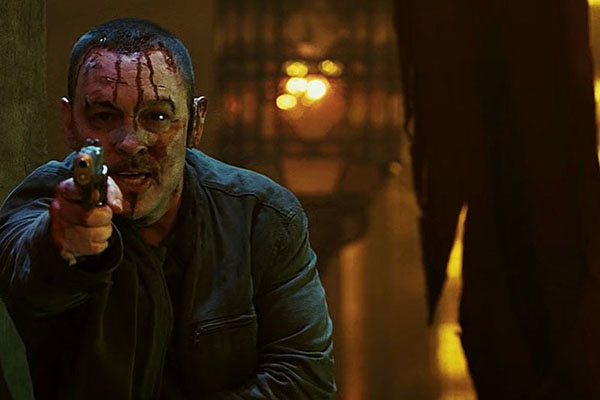 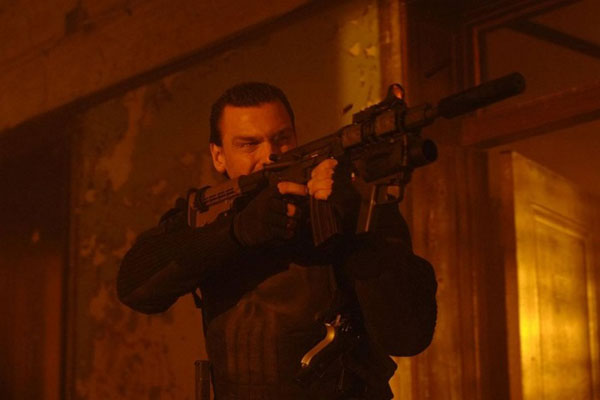 I doubt I'm the only one that was troubled by this film, or simply hated everything else about it, as the movie absolutely flopped at the Box Office ($10 Mil take against a $356 Mil budget). This is a cartoonishly bad film that also manages to create one of the worst hot takes about the character I've seen yet. The best thing that can be said about the film, Stevenson's solid acting and action work, doesn't balance out all the issues with it, and that's before we even get political about it. Start to finish this is not only a bad movie but also a film with a very bad look about it.

And perhaps the issues with the character that this film so inelegantly highlights are part of the reason the Punisher moved to TV after this. These films have struggled to both show the "hero" as well as the "villain" at the core of Frank Castle. He's not a good guy, and the only reason he could ever be viewed as one is because the guys he takes out are so much worse. Over the course of a season of episodes all that nuance could be explored (or, at least, feinted towards), but in a film there just isn't enough time to get that level of discourse going. 2004's film tried to sand those edges off while War Zone pretends they aren't edges at all. "It's not a bug, it's a feature."

Whatever the case, this is a massive failure of a film on every level. I've watched a lot of bad superhero films (and I'll continue to do so) but there are very few of them that I've seen where I actively hated the message of the movie. If you want to make a Punisher film or show then do it, but you have to acknowledge the fact that for all the "good" Frank might do (and I'd say that fact is arguable) there's a lot that's wrong, at the very core, with the character. Until you acknowledge that then you're just perpetuating a hyper-violent fantasy that shouldn't exist in the world today.