From Out of the Dark, a Baldwin

I don't think anyone really cared for The Shadow when it came out in 1994. The film was designed to build off the success of the 1989 Batman, a movie that took a $40 Mil budget and turned that into a $400 Mil mega-hit. Batman was a quirky movie, a very clear studio-backlot, Gothic-designed film that came out of the singular (scissor-handed) mind of Tim Burton, a film that should have been a disaster were it not for one singular ingredient: BatmanOne of the longest running, consistently in-print superheroes ever (matched only by Superman and Wonder Woman), Batman has been a force in entertainment for nearly as long as there's been an entertainment industry. It only makes sense, then that he is also the most regularly adapted, and consistently successful, superhero to grace the Silver Screen.. 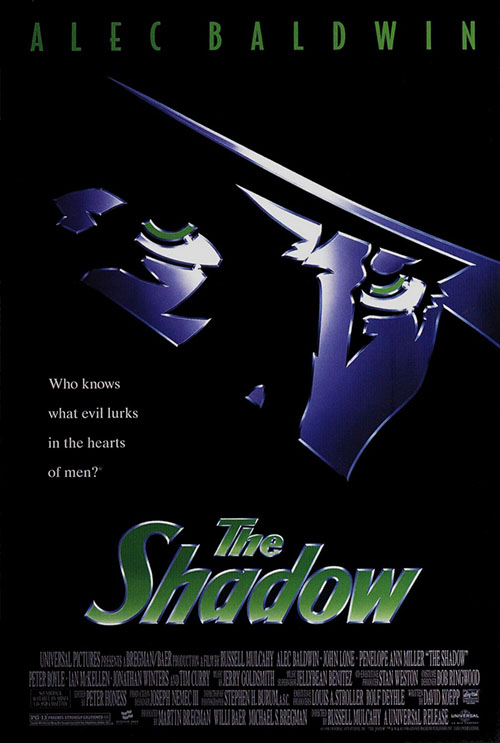 I can see the sense in making a film about The Shadow at the time. Batman was a pulpy hero from the 1940s who went on to have movie serials and comics and then eventually a massively successful movie. I'm sure the suits over at Universal thought to themselves, "let's do that exact thing for another pulpy hero from the 1940s who had is own run of comics and theatrical serials. If Batman can do it, why not this other dark avenger of the night?" Obviously Universal couldn't have access to the stable of heroes over at DC ComicsOne of the two biggest comic publishing companies in the world (and, depending on what big events are going on, the number one company), DC Comics is the home of Superman, Batman, Wonder Woman, and just about every big superhero introduced in the 1930s and 1940s. so they had to make due with what they could. The result was a film that felt like a copy of the design aesthetic of Batman '89, just without the lead character that served as the big draw for audiences. It also resulted in a very ho-hum $48 Mil take from a $40 Mil budget. Not the result Universal wanted, I'm sure.

The thing, while audiences may not have cared much for Lamont Cranston and his adventures as "The Shadow" at the time, I have to admit that the film is actually pretty decent. The trailer for the film was likely partially to blame for the films lack-of-success as it is, honestly, a muddled mess that does nothing to draw you into the story of the hero or make you care about what's going to happen in the film. The trailer wants you to think it's going to be a propulsive action film, but that's not the actual film -- The Shadow is much more of a Gothic superhero drama with only a few spots of proper action, and the trailer twists itself in knots trying to present something else.

The bigger issue, of course, is that The Shadow simply wasn't a known name by the time he came out in theaters in 1994. Where Batman had been a presence for years, with his comics running non-stop since the 1940s, The Shadow's books came out in fits and starts, published (amusingly) largely by DC comics off and on since the 1970s. He was so C-list that his last theatrical production came out in 1958, and DC cared so little about him they let Universal have him for a film. If he could have been a success at the Box office, I doubt DC would have let him go so easily. They knew what Universal clearly didn't: no one cared about The Shadow.

Which is a pity because, as far as Batman '89 clones go (a group that also includes films like The Phantom '96 and The Rocketeer '91, The Shadow is a very watchable movie. It's not that great, mind you -- it suffers from some pretty bad CGI at this point, along with cheesy (maybe delightfully so) performances -- but it is anchored by a winning, understated performance from Alec Baldwin along with a superhero that still feels fresh and interesting even now simply because The Shadow isn't that well known. What was a weakness for the film at the time becomes its greatest strength in the long haul -- this film has legs because you just don't see The Shadow all that often. 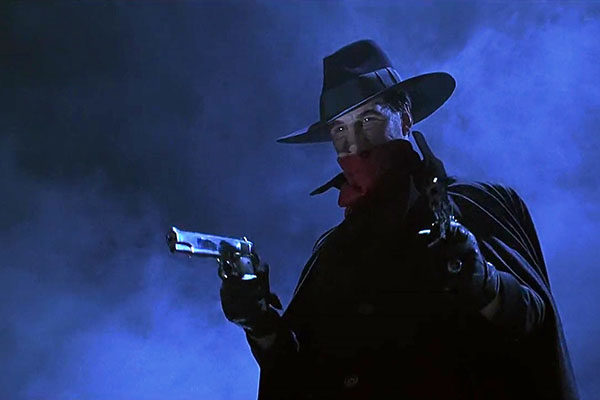 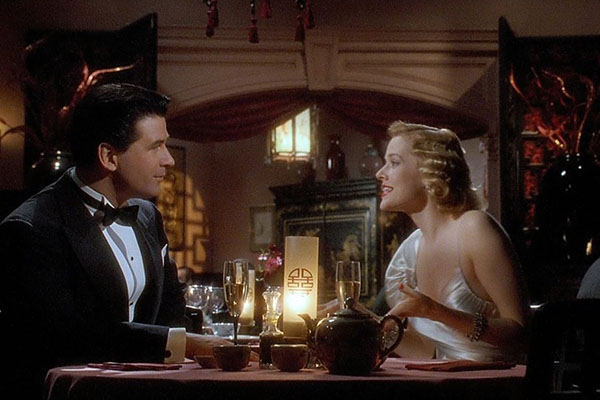 In the film we're introduced to Lamont Cranston (Alec Baldwin), a Great War veteran who stayed overseas and set himself up as a ruthless warlord. The local holy man, Tulku, saw great strength in Cranston, strength enough to defeat the evil within. He had his men kidnap Cranston, and then Tulku made the warlord an offer: tap into the powers within and become a hero, or die. Cranston, naturally, chose to be a hero. Years later, back in New York, We witness Cranston, now stalking the night as The Shadow, save the lives of people around the city. Each person saved is then enlisted into The Shadow's network of spies and informants, people he can trust to aid him when needed.

Those assistants would be needed, too, as a threat soon came to New York in the form of Shiwan Khan (John Lone), last descendant of the great Genghis Kahn. Both The Shadow and Shiwan had powers over the minds of "lesser" men, hypnotic abilities they were taught by Tulku in the hopes they would use the powers for good. But where Cranston actually took those lessons to heart, Shiwan had different plans. He wanted to rule the world, like the great Genghis, and would stop at nothing to achieve that goal. That put The Shadow up against a foes that knew all his powers, a terror that only a supernatural hero could fight, not only for the fate of New York but the entire world.

Although I doubt there were many fans of The Shadow when this film came out, I'm sure there were a few that were irritated with the changes made to the character for the theatrical film. The movie gives our hero supernatural powers -- the "ability to cloud the minds of men" -- so he could blend into the shadows (as per his namesake) and disappear from view. Without those changes, though, The Shadow really would have been just another Batman clone, a rich playboy who decided to fight crime simply because he saw injustice. Giving him powers, and a different motivation, helped to differentiate the hero even as the film itself copied a lot of Tim Burton's techniques.

Make no mistake, director Russell Mulcahy and his team clearly had a mandate to take the form and function of Batman '89 and crank out something that would feel familiar to fans of that movie. That's clearly why The Shadow has all the same hallmarks of Burton's film -- the Gothic/Art Deco setting, the studio backlot feel, and hammy acting from the villains. This movie really wanted audiences to feel comfortable with the hero, give them another dose of expected superhero delights, and while that probably didn't feel fresh at the time it does at least give the film a specific voice. Mulcahy isn't Burton, and he doesn't have that director's weird bent, so this film does feel a little like it's just putting on a setting instead of inhabiting it, but it also makes the film feel different now from all the modern-set superhero films we get today our of the DC Extended UniverseStarted as DC Comics' answer to the MCU, the early films in the franchise stumbled out of the gates, often mired in grim-dark storytelling and the rushed need to get this franchise started. Eventually, though, the films began to even out, becoming better as they went along. Still, this franchise has a long way to go before it's true completion for Marvel's universe. and Marvel Cinematic UniverseWhen it first began in 2008 with a little film called Iron Man no one suspected the empire that would follow. Superhero movies in the past, especially those not featuring either Batman or Superman, were usually terrible. And yet, Iron Man would lead to a long series of successful films, launching the most successful cinema brand in history: the Marvel Cinematic Universe.. 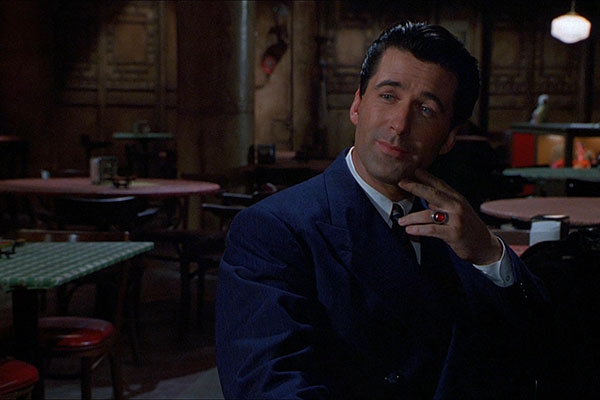 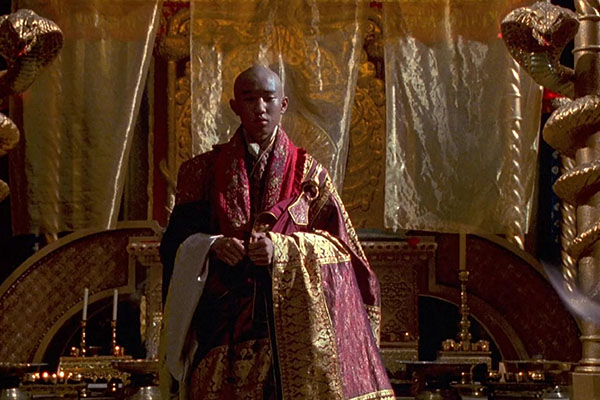 The film does also benefit from Alec Baldwin at its center. Baldwin, in everything he's in, always feels like he's slightly apart from the film or show, more like he's commentating on it instead of inhabiting it. That can sometimes be a flaw, but the right productions make use of his particular acting style -- 30 Rock, for example, used Alec Baldwin's aloofness to create masterful humor -- and in the case of Lamont Cranston, that aloofness actually works as a strength. This is a guy with a dark secret, always hiding himself away from people, removed from everyone he interacts with. That's the perfect kind of character for Baldwin and it actually makes Cranston more interesting, not less.

Plus, honestly, Baldwin is a master of a dry, subtle take. There are plenty of moments where the actor has to react to other people and his reserved, simple responses give the film some of it's best humor. The trailer pitched the film as a balls-to-the-wall action film, but this film has as much drama and comedy-of-manners to it. It's a weird mix, but for the time and place it really works, and all of that is anchored perfectly by Baldwin (aid assisted by a solid cast of character actors and performers, like Penelope Ann Miller, Ian McKellen, and Tim Curry).

I know why this film failed -- it was a bad fit for theatrical audiences at the time even as it was tailor-made for them -- but that doesn't stop it from being a good film. The movie didn't work when it came out but, as the years tick by and the movie becomes more and more removed from the specific time and place it came out, the charms of the film shine brighter. This was a simple superhero film, a tale of good versus evil, and it might have been a little too simple, a little to "samey" for audiences of 1994. But now, with all kinds of heroes out there, and the same stories told over and over again, I come back and watch The Shadow and enjoy it even more. Here's a hero we don't see often, in a film that works to his very specific strengths. I doubt we'll get another film from this hero again, but I'm quite happy with the one recent outing he's gotten as it's just a fun, stylish little movie.